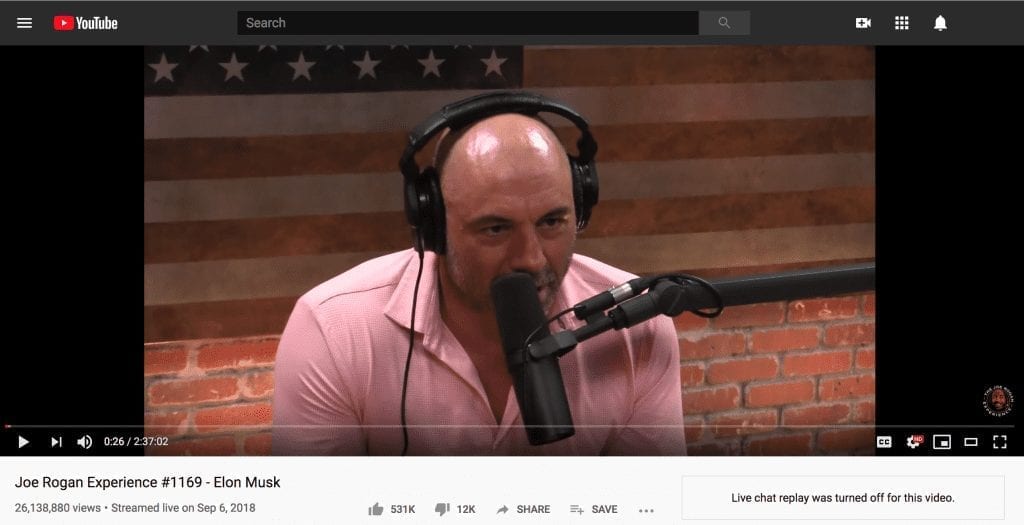 Commentary: Joe Rogan Is a Journalist

In a 2018 episode of the Joe Rogan Experience, host Rogan interviewed the CEO of Tesla and SpaceX, Elon Musk. (via YouTube).

(PETERSBURG, Va.) — In March 2020, when the coronavirus began to spread in the U.S. and shutdowns were underway, infectious disease expert Dr. Michael Osterholm sat down for a 90-minute interview to explain the COVID-19 virus to an audience of 15 million people. Across the table was Joe Rogan, host of one of the most influential and popular programs in the world. In his interview with Osterholm, Rogan became indistinguishable from a professional reporter. But he’s never considered a journalist.

Rogan—whose career spans comedy, sports commentary, and reality television—has become a preeminent figure in the fast-growing world of podcasting. Every month, 12 million listeners tune into The Joe Rogan Experience, a no-holds-barred interview program where he mixes it up with celebrities, politicians, captains of industry and just plain weird people.

Sometimes, his interviews make national news. Elon Musk shared a blunt with Rogan on a 2018 episode of the show—pot is legal in California where the show is taped and broadcast—resulting in a 9% fall in Tesla stock. In June 2019, just a week after Area 51 conspiracy theorist Bob Lazar made an appearance, a listener created the Facebook event “Storm Area 51, They Can’t Stop All of Us,” which encouraged millions of people to attempt a raid on the Air Force facility in Nevada.

Unlike newspaper or television journalists limited by print space or airtime, Rogan’s spontaneous and open-ended podcast format entices guests to reveal things about themselves or explain ideas in extensive detail. In this way, Joe Rogan has become the Howard Stern of podcasting. Stern took the radio format to another dimension with his intimate interview style, and invented his tag line “The King of All Media” during a decades-long career. Rogan may have accepted the baton for that title with an audience 10 to 12 times the size of Stern’s.

Rogan has never been shy to make his opinion clear or criticize his guests. During the 2020 Democratic primaries, he stated on the show that he would vote for Senator Bernie Sanders given the choices. And when former Breitbart editor Milo Yiannopoulos said, “Everywhere without a strong Christian heritage is a fucked up place with bad morals,” Rogan fired back: “You think that the only way for a person to have ethics or an understanding of each other is to rely on ancient myths that are easily scientifically disproven?”

Starting his career as a stand-up comedian, Rogan landed his first TV job playing a streetwise electrician in the 1990s sitcom NewsRadio on NBC. In 2001, he became the first host of the popular extreme stunts show Fear Factor, which aired on NBC until 2006. A video of Rogan went viral after he confronted fellow comedian Carlos Mencia in 2007 over accusations of plagiarism onstage during a stand-up set.

The first episode of The Joe Rogan Experience aired in December of 2009 and has since run more than 1,500 episodes. The show usually hovers around the top of the Apple Podcasts charts and was ranked the 5th best podcast in the world by toppocast.com as of Nov. 2020.

Like any reporter or journalist, Rogan conducts interviews in order to succinctly communicate pertinent information to the general public. Rogan’s podcast upholds two of the Pew Research Center’s four core principles of journalism: an obligation to the truth and staying loyal to the public. Rogan invites political figures from both sides of the spectrum, hosting liberal figures Cenk Uygur and Andrew Yang, along with  conservatives such as Steven Crowder or Ben Shapiro. Other guests include public figures whose actions are relevant to the public’s interest, such as Twitter CEO Jack Dorsey. Journalists are the middlemen between the public’s greater understanding and the facts the we want to know. Through his podcast, Rogan is that middleman.

In the run up to the 2020 presidential election, Rogan nearly had the chance to elevate his podcast to its largest audience yet. Months before Election Day, UFC fighter Tim Kennedy tweeted during a podcast that Joe had offered to moderate a debate between then-Democratic candidate Joe Biden and President Donald Trump.

“It would be four hours with no live audience,” wrote Kennedy. “Just the two candidates, cameras, and their vision of how to move this country forward. Who wants this?” The following day, President Trump replied on Twitter, “I do!”

Although Biden never responded to the offer made by Rogan and accepted by Trump, it should not be considered an absurd idea. What Rogan achieves on a regular basis with The Joe Rogan Experience is enviable for many in the news media. Joe Rogan as a debate moderator wouldn’t be much different than a reporter from CNN or Fox News.