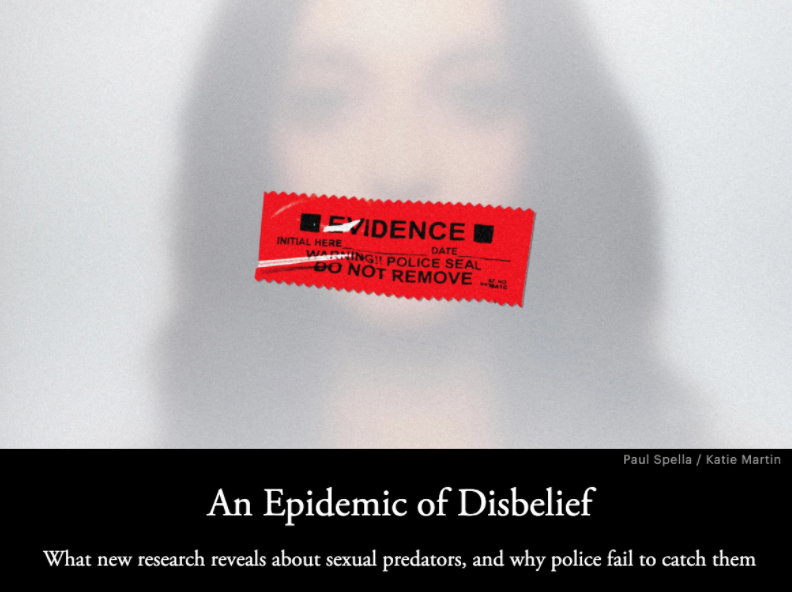 Credit: Paul Spella and Katie Martin/With permission from The Atlantic

Commentary: This Atlantic Writer Makes the Case for Victims

(WASHINGTON, D.C.) – In “An Epidemic of Disbelief,” writer Barbara Bradley Hagerty describes one hot August day in 2009, when assistant Prosecutor Robert Spada found over 11,000 untested rape kits in a Detroit warehouse. His discovery would help uncover a nationwide scandal—that police warehouses across the country stored an estimated 400,000 rape kits for decades, failing to test DNA evidence that could have brought justice for hundreds of thousands of sexual assault survivors.

The untested rape kits, according to Hagerty, were representative of a bigger issue: “a criminal-justice system in which police officers continue to reflexively disbelieve women who say they’ve been raped.” This was the crux of her research and reporting that included seven months of travel and more than five months of revisions with her editor at The Atlantic.

Hagerty’s reporting is unflinching—first in her depiction of the brutal crimes the victims endured, and second in detailing what was an utter systemic failure in providing women proper redress for the crimes committed against them. In-depth reporting and painstaking research enabled her to map out how local justice systems, city after city throughout the U.S., failed women again and again. Sources included 50 sexual assault survivors and some 20 advocates. She pored over more than 1,000 legal documents.

Through her interviews, Hagerty bore witness to the graphic and heartbreaking stories of the victims—wronged once by an assailant, and betrayed again by a system designed to protect them.

Liz Garcia was raped in her Cleveland home for hours and dragged from room to room. Assailant Nathan Ford was “…prepared and meticulous,” Hagerty wrote. “He wore gloves and a condom. He spread a towel on Garcia’s bed, and took it with him when he left.”

“He had shaved his legs and chest so he wouldn’t leave hair behind,” Garcia told Hagerty, “He knew what he was doing.”

As a former probation officer, Ford was exacting in the execution of his crimes–which prevented him from getting caught for decades. But the problem was how the Cleveland police dealt with rape cases in the first place.

If a poor or vulnerable person was raped, the police would do little more than make a few phone calls. Hagerty found that even though sexual assault victims like Ford’s would undergo forensic exams, the rape kits were more likely to be shelved than sent to a lab. It would be rare for detectives to visit the victim, talk to witnesses, even go to the crime scene.

“If a victim couldn’t come to police headquarters on the detective’s timetable—because she couldn’t find transportation or child care or get time off from work—she was labeled ‘uncooperative.'” Hagerty wrote.  Either that or the detective would write in his report that the victim could not be located. Reasons like these would be sufficient enough to end the investigation and close the case. “Yet when investigators reopened sexual-assault cold cases 20 years later,” she added, “they almost always found the victim within a few hours.”

Hagerty highlighted the work of a Cleveland-based team of researchers and investigators who went through 5,000 untested rape kits. With newer technology, principal investigator Rachel Lovell had the “biological name tags” of thousands of men. This is what propelled Hagerty to pursue this story—how could irrefutable evidence such as DNA not be used to prosecute these offenders, many of them serial rapists?

For Liz Garcia, it would be more than a decade before they finally pinpointed Nathan Ford as the culprit of a crime that left her experiencing five panic attacks a day, needing to sleep with the lights on, and leaving multiple knives around the house and under her pillow. Her assailant was ultimately incarcerated, but she lived for 12 years in terror.

Reporting like Hagerty’s on the untested rape kits have garnered national attention and helped assure the rights of victims of sexual assault. In “Epidemic of Disbelief,” she highlights how victims of rape have been failed by the criminal justice system and advocates for change that is attainable, overdue, and necessary.

According to Hagerty, the article made prosecutors more open to talking to police about this issue; the piece is cited often and used in discussions with police and detectives.

“It galvanized police and prosecutors to do the right thing,” she told The Click.

“This is the question that haunts every advocate, researcher, and enlightened detective or prosecutor I spoke with,” she says in the article.  “How many rapes could have been prevented if the police had believed the first victim, launched a thorough investigation, and caught the rapist? How many women would have been spared a brutal assault?”