Contracting COVID-19 in the Waning Months of the Pandemic 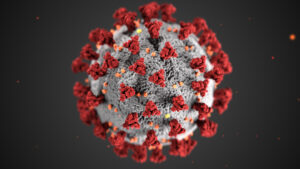 [Image  provided by the CDC]

Dr. Anthony Fauci once summarized his approach to navigating the politicized climate of infectious disease with a quote from The Godfather: “It’s not personal, it’s strictly business.”

I mentioned this to my parents with a hollow, forced laugh when I told them I tested positive for Covid-19 at the beginning of March.

As I coped with the actual sickness, a concurrent series of socio-political events unfolded that was perhaps more distressing. The vertically-integrated Republican political body and conservative news machine worked to slander the American Rescue Plan, wage a culture war and undermine coronavirus mitigation tactics.

As I awaited the results of my test, I scanned the internet for updates on the Congressional debate on the $1.9 trillion dollar American Rescue Plan, but what I found was the accumulation of outrage behind the de-circulation of some of Dr. Seuss’s questionable illustrations. On March 5th, House Minority Leader Kevin McCarthy posted a video of himself lifelessly reading Green Eggs and Ham as his rebuttal to this latest wave of “cancel culture.”

At this point of crucial politicking, the Democrats scrambled to pass one of the most transformative pieces of legislation in the country’s history, and the top House Republican was reading a children’s story. His actions speak to an indifference to improving the material conditions of the American people, instead choosing to propagate an intangible faux-crisis, despite the fact Green Eggs and Ham was never considered for removal. But, McCarthy relied on Fox News to amplify his unreasonable outrage, and rightfully assumed the conservative base would not to fact check it. As the Dr. Seuss saga rambled on for over five weeks of headlining on Fox News, it seems as though McCarthy made a safe political and discursive calculation.

The Republicans’ priorities suggest the American political system is at a point where one side truly believes that in order for them to do better, the opposing side must fail, and they will do whatever they can–regardless of the effect on the country–to aid that outcome. McCarthy and his caucus consistently distort or ignore the benefits of the proposed solutions to coronavirus (masks, social distancing, vaccinations, economic stimulus) and ultimately hope that the wrong people, not their voters, suffer.

The notion our two major parties cannot come together to face a common biological enemy does not bode well for us as a nation.

After analyzing the oropharyngeal swab used to collect a sample of my respiratory droplets, it was determined I was Covid positive.

I cannot say with any certainty how I was infected. Even with no conclusive point of flagrant irresponsibility, I felt as though I had failed the collective national effort to minimize the spread of the disease by catching it.

As I tried to reconcile with the shame I had felt for contracting Covid, I came across a story of a mask-burning rally in Idaho. This was the latest installation of citizens subverting public health measures in a misguided act of civil disobedience.

Not only as an active Covid patient, but as an individual conscientious of the human toll of the virus, this was concerning. If I felt shame for contracting Covid and these people were shamelessly assisting its spread, how can we truly put the virus behind us? Indeed, a large majority of the country has selflessly made major alterations to their lives, however, universal commitment to the combating virus is crucial in preventing the infection rate from surpassing the vaccination rate or extending the timeline long enough for a mutation to manifest. An inconsistent, disorderly approach to fighting Covid is part of the reason why the disease has persisted for over a year–and yet, some conservative citizens and politicians are embracing the lack of uniformity by ending state-wide mask mandates or participating in these literally and figuratively toxic mask-burning rallies.

Ultimately, I went to bed asymptomatic, and felt lucky to be so. For the time being.

The next morning, I couldn’t smell or taste. But that was not the worst of it.

I could hardly stand. I could barely speak. The only thing that drove me out of my bed was a wave of nausea that brought me to my knees before the porcelain god that is my toilet.

It was during this upswing in symptoms that I ceased to be a free-thinking person and was reduced to a blob of semi-conscious human tissue.

The global tragedy of the pandemic will be studied in history and medical journals for decades to come. But one of the most frustrating aspects will be America’s institutional efforts to actively make it worse. The blatant science denialism of the Trump administration is well documented. And the rhetoric of the right continues to distort the science and helpful information from reaching many millions of Americans. These were the pessimistic musings of a delirious Covid patient.

During this hazy stage, my grandmother called me to notify me she had received her second vaccination. As an avid Fox News consumer herself, I felt relieved that she had accepted the shot.

The undisputed worst day of my Covid experience was March 10th. I will revere the anniversary of this date for years to come.

I scheduled a tele-health session to have myself evaluated by a professional. Fareed Zakaria, in his book Ten Lessons for a Post-Pandemic World, wrote that symptoms could always be conveyed verbally, and the barriers to tele-health have always been ,“Human and organizational.” I momentarily marveled at the digitization of healthcare over the last year. Necessity is truly the mother of all invention.

In my first human interaction in days, I was told that my clogged sinus had created such pressure in my face that I developed tinnitus of the ear. I thought of Vincent Van Gogh, who cut his own ear off in a fit of insanity. I considered doing the same, to preserve my own.

On March 11th, with my own condition plateauing, the US vaccinated 2.48 million people and passed the American Rescue Plan without a single Republican vote. Of course, these facts came as exceptionally good news. However, the conservative media machine began to more vocally demand Trump be credited for the success of the vaccine rollout, further politicizing a public health issue.

Sean Hannity used his air time to say, “Joe Biden, unity president that he is, taking credit for someone else’s work. Joe, you want unity? Why don’t you thank Donald Trump?”

It’ll be difficult to tell when I’ve fully recovered from Covid. Weeks later, my sense of smell is still partially absent and the tinnitus in my ear persists. A similar case could be made for the country as a whole: there is no definitive end point, and the scars of the virus will linger for an unforeseeable amount of time–with some experiencing worse long term ramifications than others.

My isolation period overlapped with the year anniversary of the first quarantine period imposed. To this day, elected Republicans and conservative news outlets continue to deny the science and magnitude of the problem. With over 550,000 Americans dead, this has proven to be either a grossly incompetent approach, or a viciously cynical attempt to manufacture the collapse of the Democratic trifecta in the government.

The American Rescue Plan is one of the most transformative pieces of legislation in the nation’s history. With stimulus checks being delivered and plans for other financial rollouts including money for childcare and schooling, the bill will live alongside us as it is implemented over the next several months.