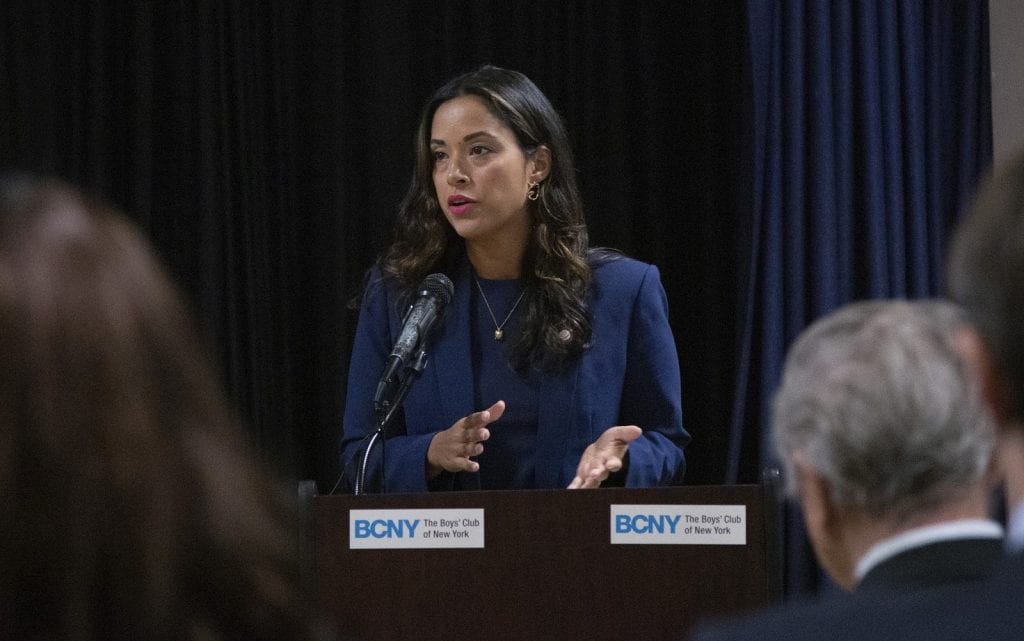 (NEW YORK) — Whether attending class, press conference, rally meeting or city budget meeting, no two days are the same for Carlina Rivera. Rivera is the councilwoman for New York’s District 2 which includes the neighborhoods of East Village, Gramercy Park, Kips Bay, Lower East Side, Murray Hill, and Rose Hill. Since taking office in January 2018, Rivera has been able to tackle everything from small business survival, to the East Coast Resiliency Project, and affordable housing.

Because Rivera was born and raised in District 2, she feels obligated to serve her community to the best of her abilities. “It’s exciting and challenging. And it’s the best job in the world. You always want to make sure that your community is proud of you because that’s why they elected me,” she says.

District 2 consists of neighborhoods with a rich history of waves of immigrants moving to the area from Eastern Europe, Ireland, Italy, China, and Puerto Rico. Rivera understands that her district has always been a welcoming community and wants to preserve its uniqueness and the small businesses that have held the community together for decades.

Rivera has also been working hard on perfecting Mayor de Blasio Administration’s East Coast Resiliency Project (ESCR), a project that will protect 2.4 miles of urban coastline against floods and rising sea levels. Over the past few months, this project has received a lot of backlash from its community and news coverage since initially the project would require all of the East River Park to be closed off to the public for three years.

“The East River Park is so important to everyone in this community,” explains local Roman Chajkowsky. “The track, soccer fields, football field, tennis courts… the whole community would be devastated if we lost access to all of this for three years.”

Rivera, who visits the park from time to time to jog around the track, understands the importance of this park for her community and has worked with the ESCR committee to make sure the park will remain accessible in sections throughout construction.

“What we’re working on now is making sure that we create a park that is more resilient, that is community-minded… and that we’re trying to be innovative in how we create one of the greenest parks and use what is probably the largest investment in a resiliency project by the city,” explains Rivera.

When Rivera isn’t working on making District 2 the district of innovation, she loves being with her husband and pug. She also enjoys bikes rides, yoga classes, and loves to read fantasy and science fiction novels. Rivera also makes a point to spend time with her local surrogate grandmother who took care of her for many years when she was growing up in the Lower East Side.

“I think that being from here is certainly something different. The district has never really had someone who was born and raised in the area,” says Rivera. With her love and knowledge of District 2, Rivera wants to help improve and preserve the community she loves.