COVID-19 puts Connecticut town in a dilemma that’s more trick than treat: Whether or not to cancel Halloween 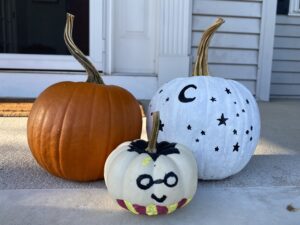 SUFFIELD, Conn. — Halloween could be in danger of cancelation amid the COVID-19 pandemic, but one Connecticut town leader is weighing multiple options to keep residents safe during the holiday.

Melissa Mack, the first selectman of the small town of Suffield, said she’s holding off as long as possible before making any announcements to halt trick-or-treating his year. The title of the first selectman is akin to a city’s mayor or town’s chief executive officer.

“I love Halloween,” Mack said. “So I would love to have a traditional Halloween.”

Just over the state border in neighboring Springfield, Massachusetts, the mayor announced September 11 that door-to-door trick-or-treating won’t be allowed in the city this year in hopes of slowing the spread of the coronavirus.

Mack is hoping to avoid making this tough call.

“I’ve heard such negative things about Halloween being canceled in Springfield already that I would be really reluctant to do that because I know how much it means to be able to celebrate,” she said. “I think right now with the infection rate in the town being so low, it’s highly likely that we could have some traditional Halloween.”

As of September 25, there were 183 total confirmed positive cases of the coronavirus in Suffield, according to the state Department of Public Health.

A state-wide mandate canceling Halloween doesn’t seem to be in sight, either, according to Max Reiss, director of communications for Gov. Ned Lamont.

“The governor has consulted with the DPH, and they will be discussing guidance to be provided for families to enjoy a safe Halloween,” Reiss said. “He has no plans to cancel Halloween.”

Parents are already asking Mack if they’ll be able to take their kids door-to-door for sweet treats.

Kristy Organ, a Suffield mother of boys ages 12 and 14, said her kids would be disappointed if it was canceled.

“There is a risk no matter what activity you do,” Organ said. “My boys are always baseball players, and it wouldn’t be a problem to add a mask.”

If the town does end up needing an altered plan, Mack suggested people keep it in their own neighborhoods to make it safer.

“Maybe we encourage people to take candy from a bucket, stick your hand in and get one, and then we tell the parents to maybe quarantine it for a few days or something like that in the abundance of caution,” she said. “But I’m hoping we can get to the point where we can do something where everyone can experience the best of Halloween.”