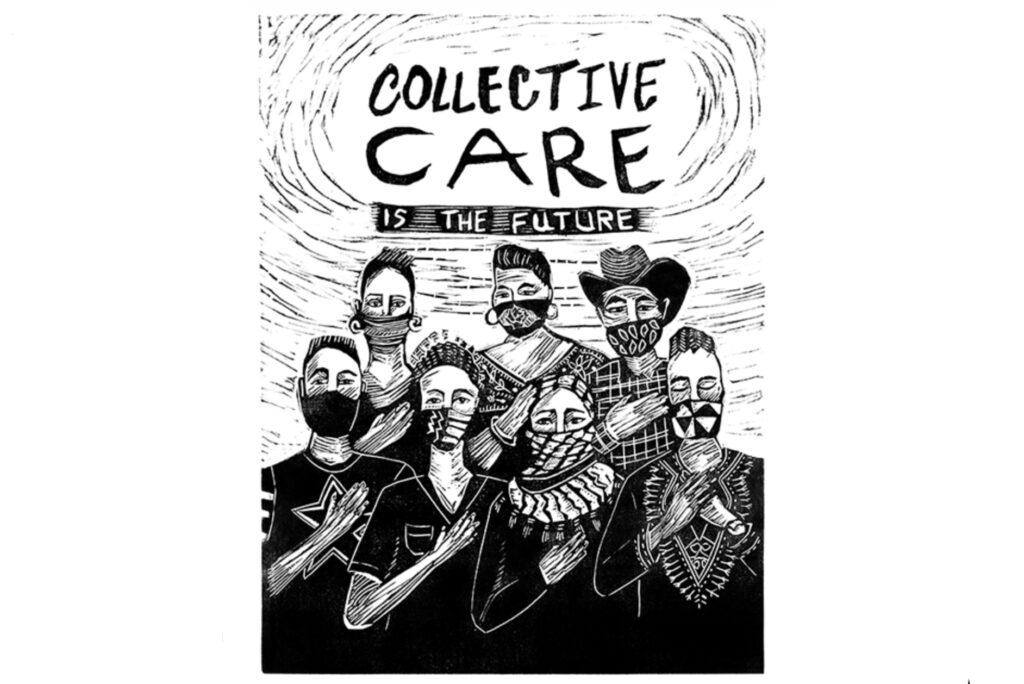 (DALLAS, TX) — Propelled by the Black Lives Matter movement and the historical reckoning around race after the George Floyd protests, activists and creatives across Dallas are finding ways to express their feelings of frustration — by pairing activism with the city’s burgeoning art scene.

One of these creatives is Mexican-American artist Angela Faz. They are an interdisciplinary artist who uses different methods, like printmaking, to comment on issues around social justice.

Faz first worked with the nonprofit Art Conspiracy of Dallas, which specializes in art philanthropy. People would go to a warehouse and paint, then auction the work and donate the proceeds to charity.

However, Faz said they started noticing in 2016 a spike in the number of killings of Black kids by police officers. To them, it made art philanthropy feel unfulfilling.

“Why am I doing this if I can use my skill in a different way?” Faz said.

That’s when Faz decided to become an organizer. Joining Mothers Against Police Brutality (MAPB), a Dallas-based group advocating for law-enforcement reform, felt symbolic. Faz said that their brother has been incarcerated three times for possession of marijuana.

“It was hard for the family. He’s the lucky one to survive that,” Faz said. “It’s what it means to be a Latinx person. Both Black and people like me are targeted.”

In 2016, the Dallas Observer found that the Dallas Black population faced higher odds of arrest for marijuana use than whites. Dallas’ Black and brown communities are also the most affected by COVID-19. The Centers for Disease Control and Prevention found these communities across the country could be hit hardest by the pandemic.

Back in June, Dallas County found racism to be a public health crisis.

“We have not reached the point where we can say inequities have been addressed and no longer exist in the county,” Commissioner Theresa Daniel was quoted as saying in the Dallas Morning News after the vote. “But the commitment is there.”

In 2019, Faz worked with MAPB to honor Santos Rodriguez, a 12-year-old killed by police in 1973 near Pike Park in Dallas.

MAPB got the city’s Office of Arts and Culture to approve a memorial for Rodriguez, a statue set to be completed in 2021. Activists also helped name a 103-year-old building after him, which is nestled in the park.

“For me, this is exactly what I want to do. We reclaimed the park,” Faz said.

Activists have been lobbying the city to acknowledge what Faz called “the dark secrets” of its history.

“There must be an accurate recounting of history, the role that racism plays in the evolution of the community,” Hawkins said.

He said that Dallas sits on stolen land built by Black slaves. A 2019 booklet created by his organization states North Texas was the land of the Caddo, Wichita, Kiowa, Comanche, and other indigenous peoples before a campaign of genocide and forced removal.

There are now efforts to rename Dallas’ Trinity River, located in the city’s heart, to its original name: Arkikosa River. Artists like Faz and activists like Hawkins meshed their talents to push for this change.

They worked alongside Brian Larney, co-founder of American Indian Heritage Day of Texas, to breathe life into the project. Once the three created a website and Instagram, they planned to launch in January 2020. However, COVID-19 hit, and those plans fizzled out.

They contacted Dallas city District 6 councilman, Omar Narvaez, who created an Arkikosa task force to look into the issue. Narvaez did not reply to a request for comment.

Jodi Voice, the Chair for MMIW Texas, said they were concerned with who is on the task force.

“How long is this going to take? I wonder what the task force will do? The councilman knows it will be an uphill battle,” Voice said.

Voice is of Mvskoke Creek, Oglala Sioux, and Cherokee heritage. Along with her work at MMIW, she is an ambassador and community outreach coordinator for American Indian Heritage Day in Texas and Indian Citizens Against Racial Exploitation.

A MOMENT OF CHANGE

She believes Dallas as a whole is undergoing a pivoting moment. Hawkins’ DTRHT issued a community report outlining Dallas’ racial history, and which sought to create a new vision for the city to honor Indigenous peoples. Voice called that report a significant step forward.

Through diligent work, activists believe there is a possibility for change in Dallas. Activists say a 2016 shooting in the city in which a Black man killed a police officer prompted a culture shift to “back the blue.” However, after the killing of George Floyd, that support seemed to unravel as more people called to defund the police. Now, activists are encouraging young people to get into politics.

“It’s good to share solidarity. But we are past the point of sharing woke posts,” Faz said. “We need more young people in leadership and city council who actually debate good ideas.”

The city council has the power to control the city budget, set policies, and determine tax rates, among other tasks. It also has a say over how many police officers should be on the streets and how much art can be displayed. Faz suggested that the council should have artists teach art courses to the Dallas community.

“Instead, they gave millions to the police,” Faz said.

According to a 2020 update on Dallas Open Data, city police have a budget of over $9 million. The budget for public art in Dallas is $72,185.

Frustrations over these decisions is what inspires Faz’s work.

For Faz, art paired with activism creates a meeting ground for a conversation. And it creates a sense of community.

“Art is so powerful. Institutions like schools make it seem crafty, but really it is strategic. How are you going to tell your message? It’s analytical,” Faz said.

Residents making art, putting bodies on the line, and being loud shouldn’t just be Black, Indigenous, and people of color (BIPOC), they added.

To Faz, it’s a multi-pronged process to be in a coalition with each other. Organizations in Dallas like Texas Organizing Project, In Defense of Black Lives, and North Texas Dream Team consist of organizers who teach the community how to get bail, show up to council, and develop resources. People are waking up to how organizing can create local change, Faz said.

“It’s not that hard to get involved in your community,” they added. “People need to frame their desire to help with their skills like writing or designing. Get off the phone and on to the streets.” 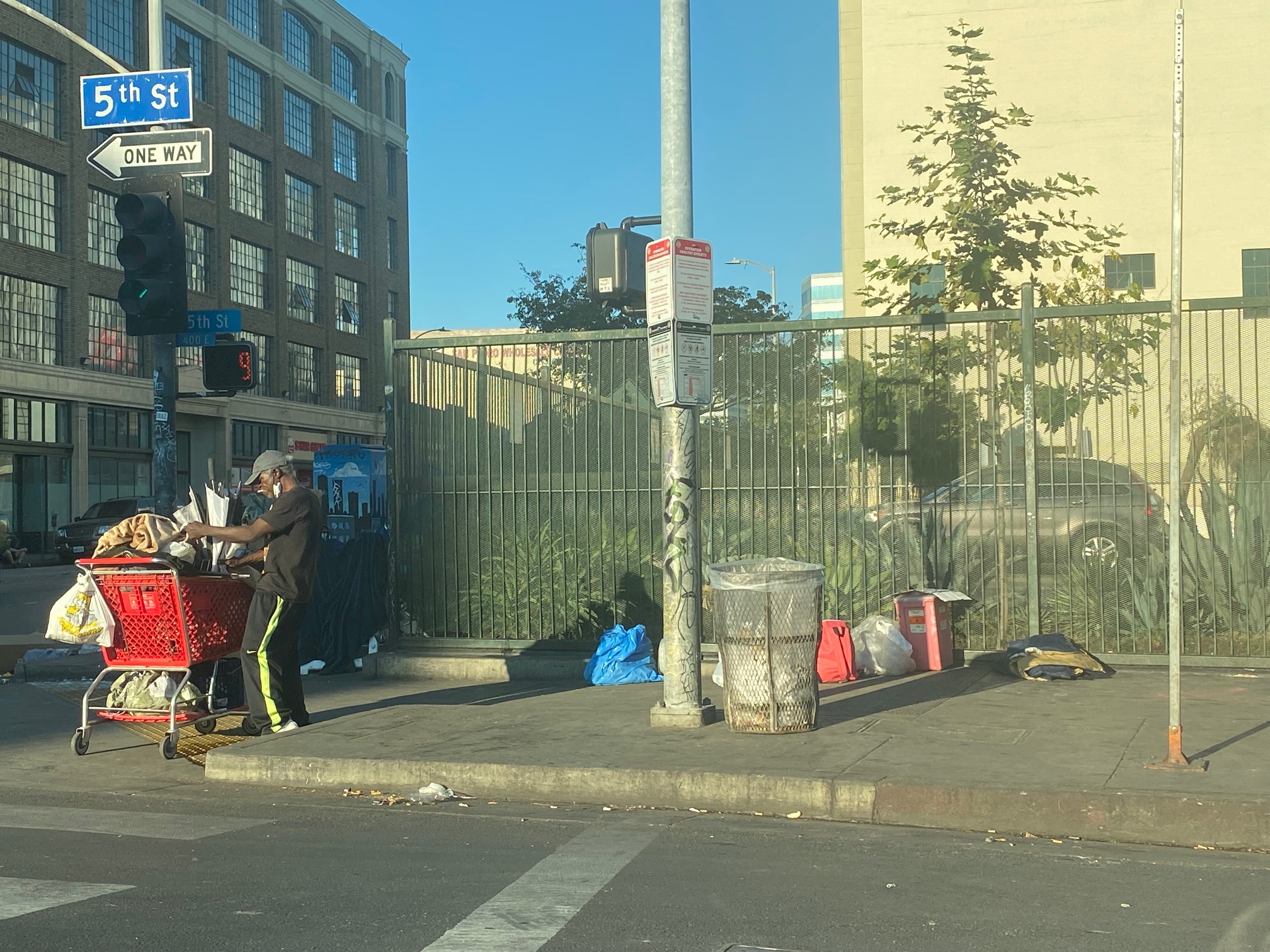 (LOS ANGELES) — As living expenses in Southern California have skyrocketed, many residents have been displaced and forced to live […]