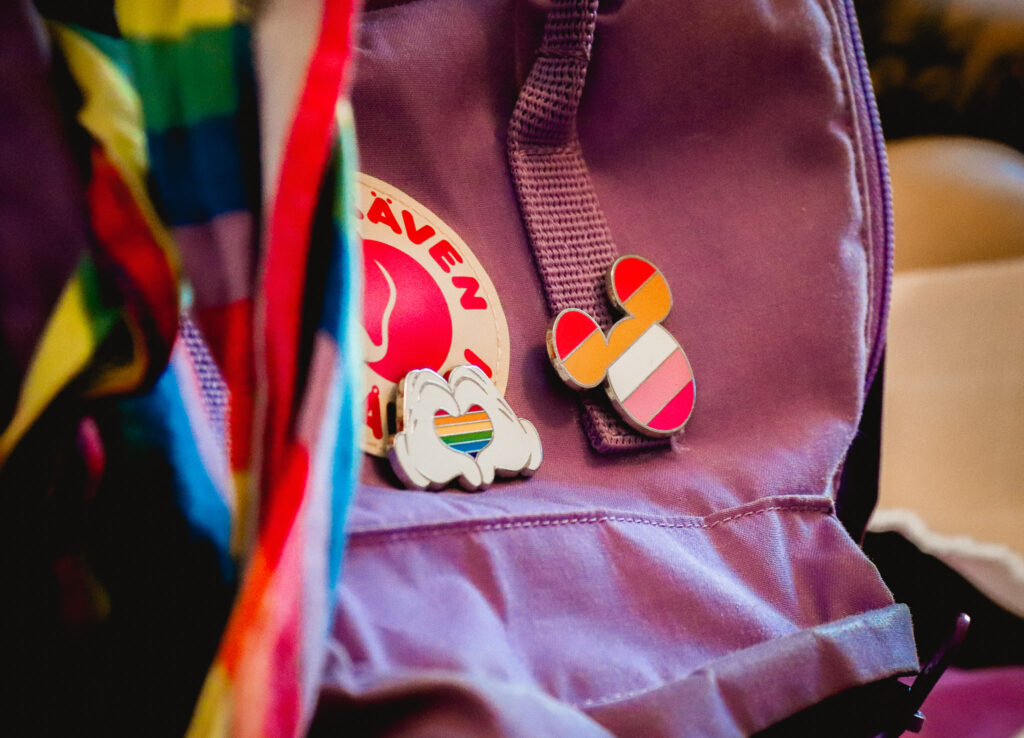 Behind the Magic: A Look Into the Lives of 2 LGBTQ Disney World Employees

(ORLANDO, Fla.) — The Walt Disney Company’s flip-flopping response to Florida’s “Don’t Say Gay” bill led to outrage amongst many Walt Disney World employees, known as cast members. The vacation resort is the largest single-site employer in the United States, generating over 70,000 jobs. Many cast members identify as part of the LGBTQ community. These are their stories. 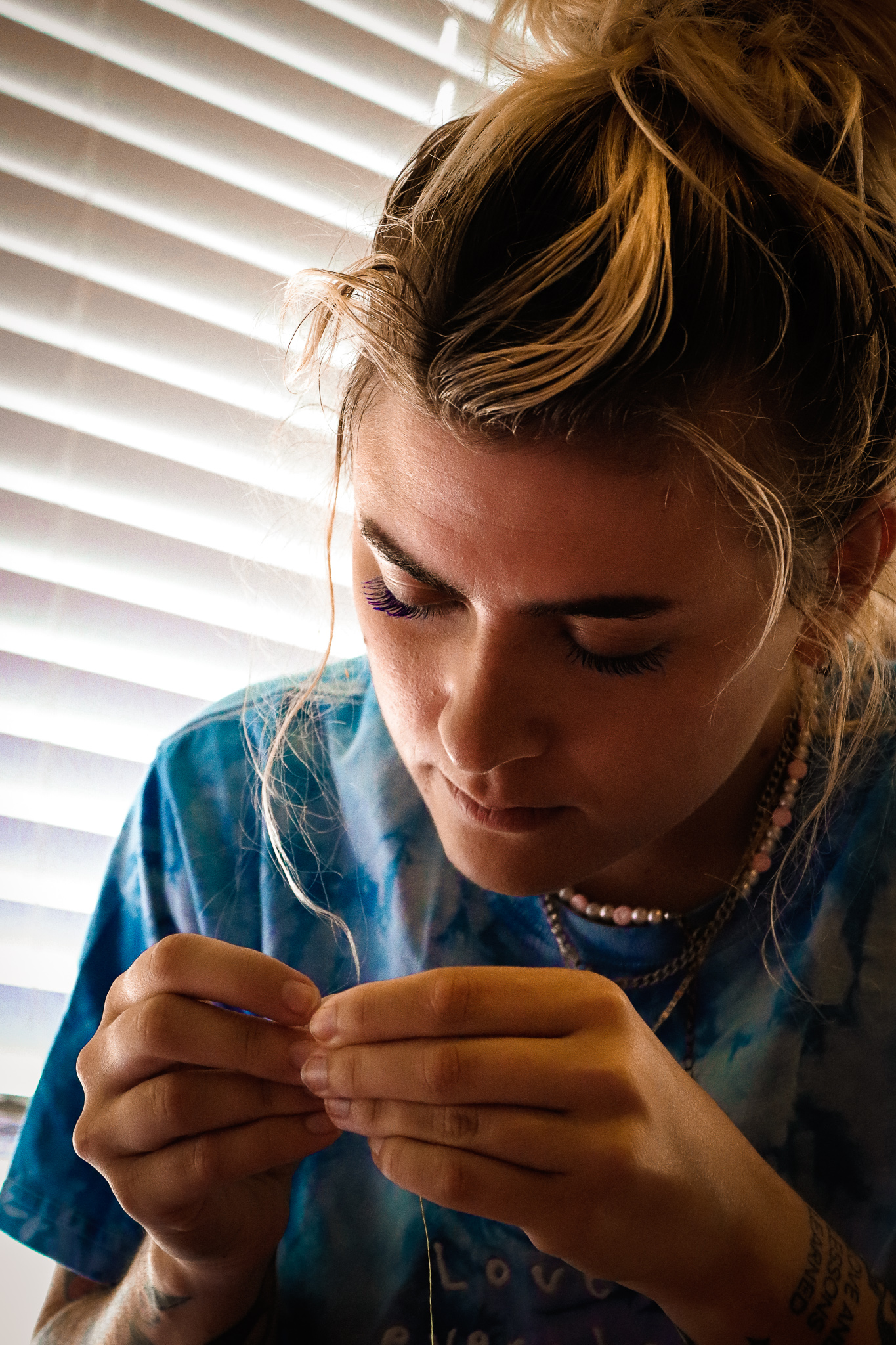 KP Pettus, 24, a lesbian freelance artist who works event operations at Epcot, threads for her next project. [Credit: Preston Moore]

“Being an artist, you compare yourself to other people,” Pettus said. “For a long time, I lost the creative feeling because I was so busy comparing what I was doing to what other people were doing. Finally, I got to the point where I just turned my art into colorful stuff that’s fun to look at. It doesn’t always have meaning per se, but it also does, in the fact that it’s fun and makes other people happy to look at it.” 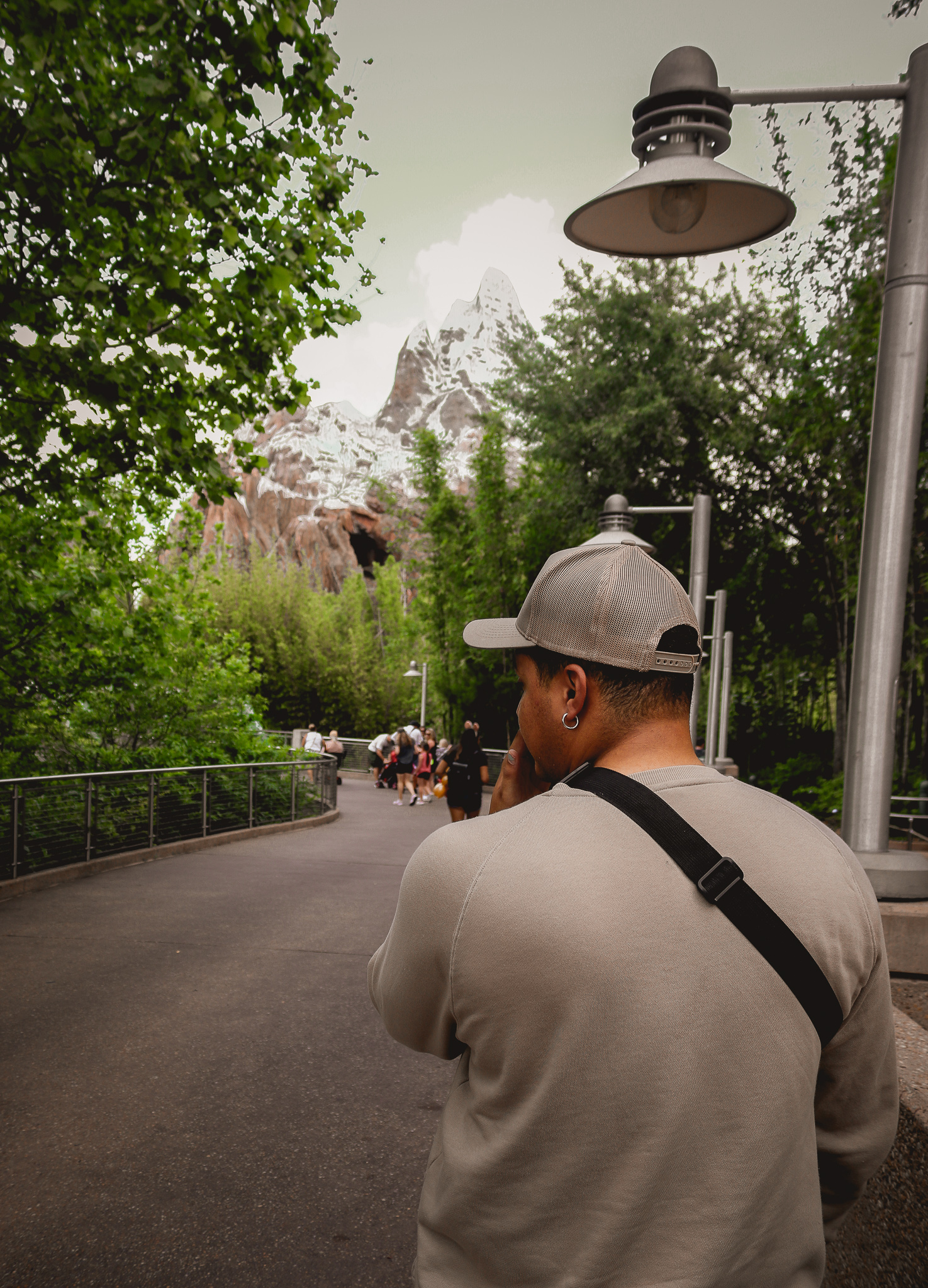 Tevae Shoels, 23, a pansexual performer who plays Bloat in “Finding Nemo: The Musical” at Disney’s Animal Kingdom, walks through the park on his way to rehearsal. [Credit: Preston Moore]

“All fall, I auditioned for things and heard nothing,” Shoels said. “Then ‘Nemo’ popped up and I submitted for it. Initially, I didn’t hear anything, so I kept auditioning… nothing. I was like, ‘okay, maybe it’s time,’ but also some people don’t book anything like Broadway until they’re 24 or 25. So I was like, ‘I’m new, I’ll just wait,’ and then I heard back from ‘Nemo.’” 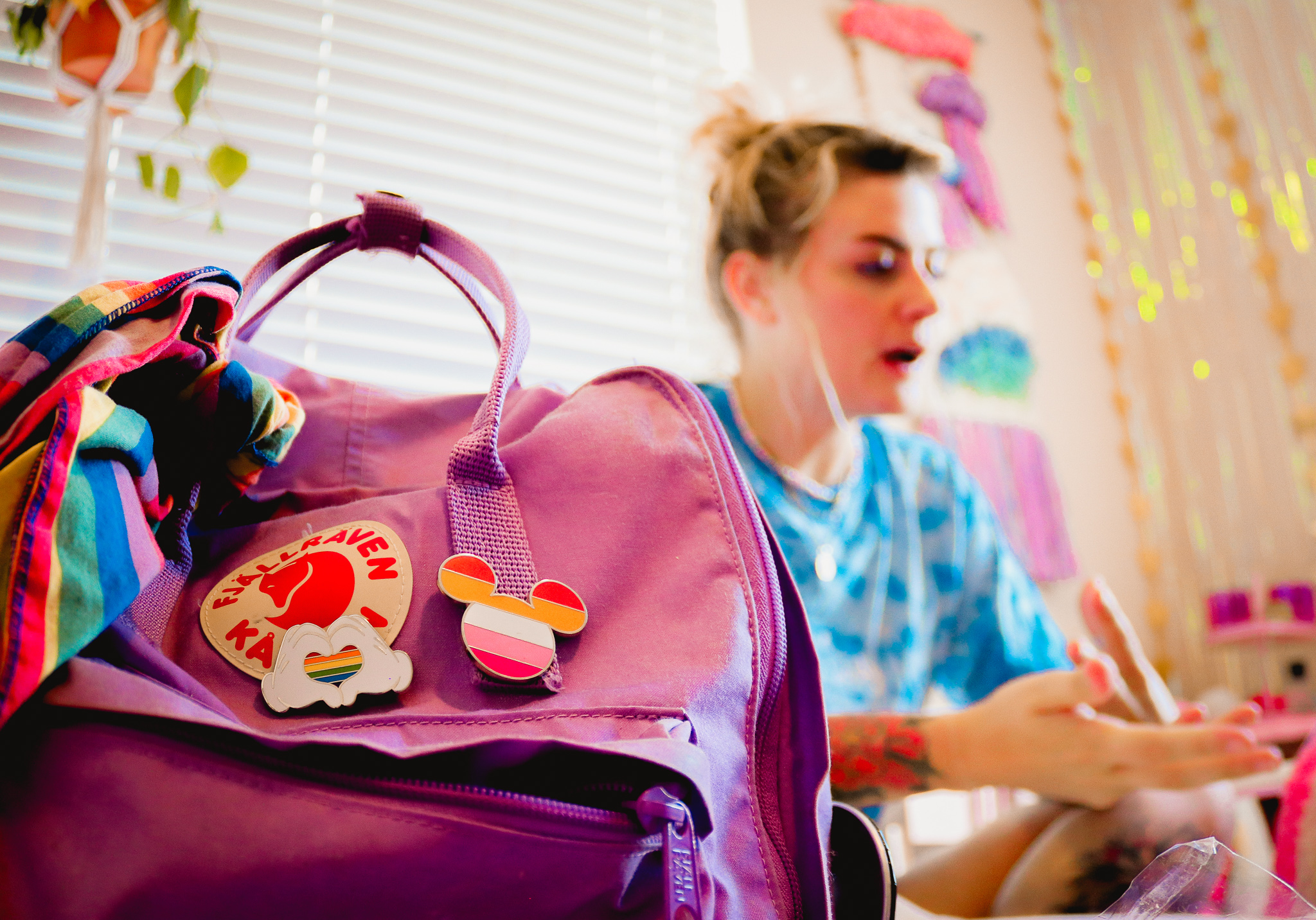 “This Disney diversity and inclusivity… it’s propaganda, basically,” Pettus said. “They rainbow-wash everything when Pride Month comes around and people eat it up, but then they support people in power that pretty much want to take everything away from us that makes us human.” 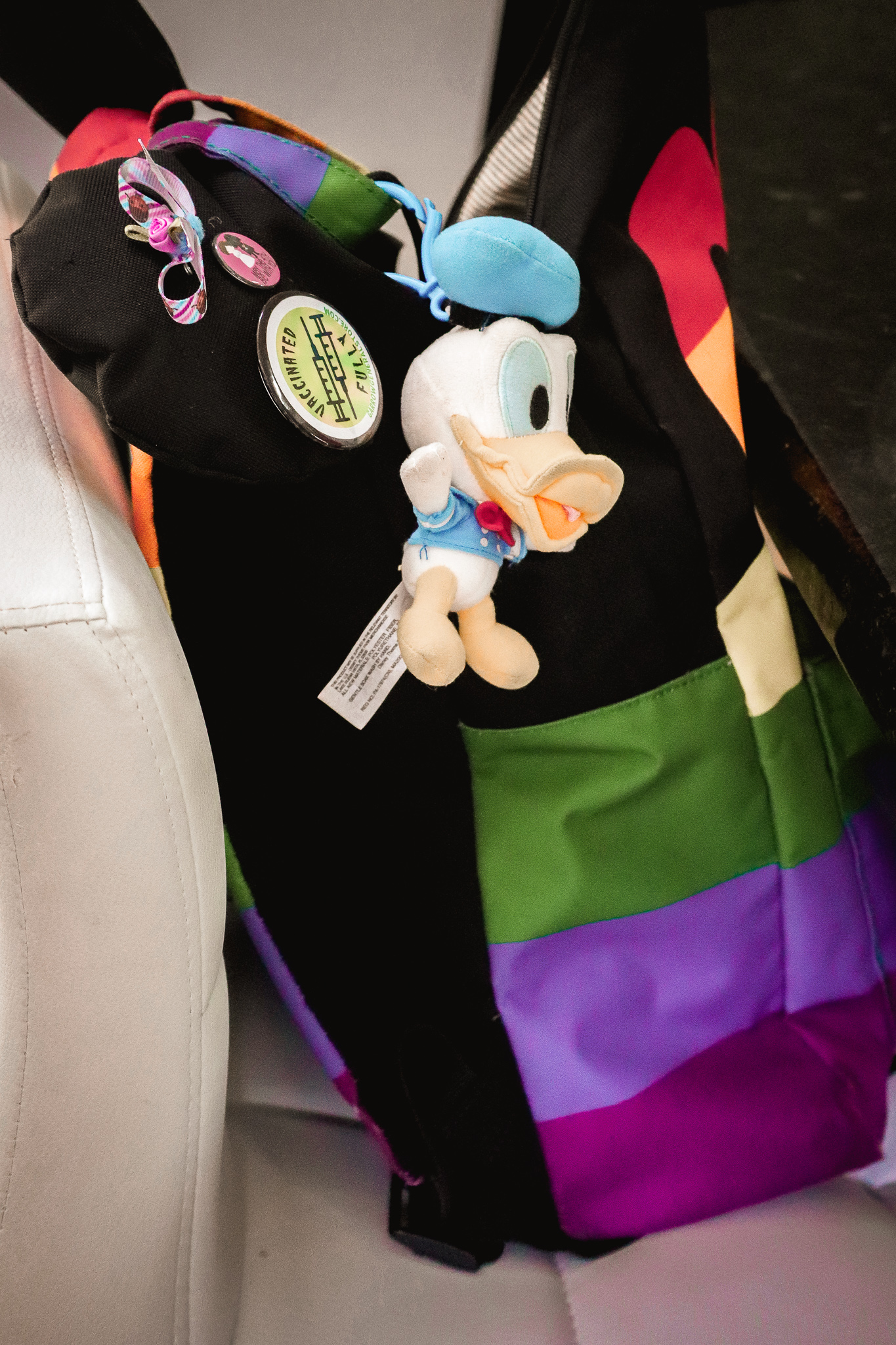 “Disney is sometimes hard,” Shoels said. “There’s a brand that you are constantly trying to work to satisfy, but I worked at Universal Studios and it was a lot more chill. It was also a lot more diverse in terms of leadership. I don’t think I’ve ever had a manager of color in any job, and it makes a difference. There’s somebody in a leadership position who sees you and they can keep the playing field fair.” 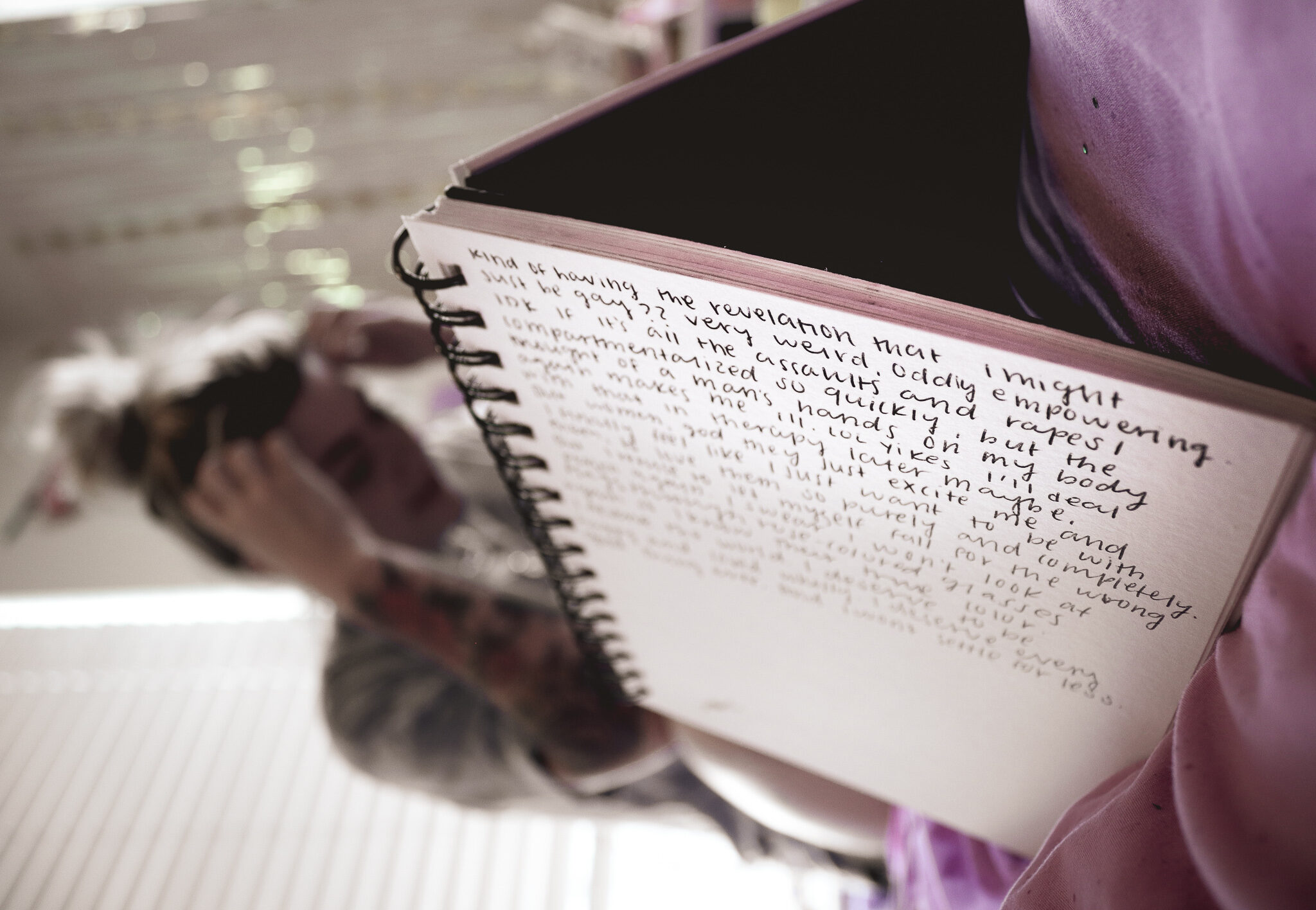 Pettus’ journal sits on her bed, open to a page where she first began coming to terms with her sexuality. [Credit: Preston Moore]

“For so long, I was trying to push these heterosexual relationships that I knew I didn’t feel right in,” Pettus said. “So, it’s really hard for me to speak on queerness, because I feel like I don’t know it as much as other people do. It feels unfair in a way, which is bad, because, obviously, I am queer, so I do have a say in it. I just still feel a little weird about it.” 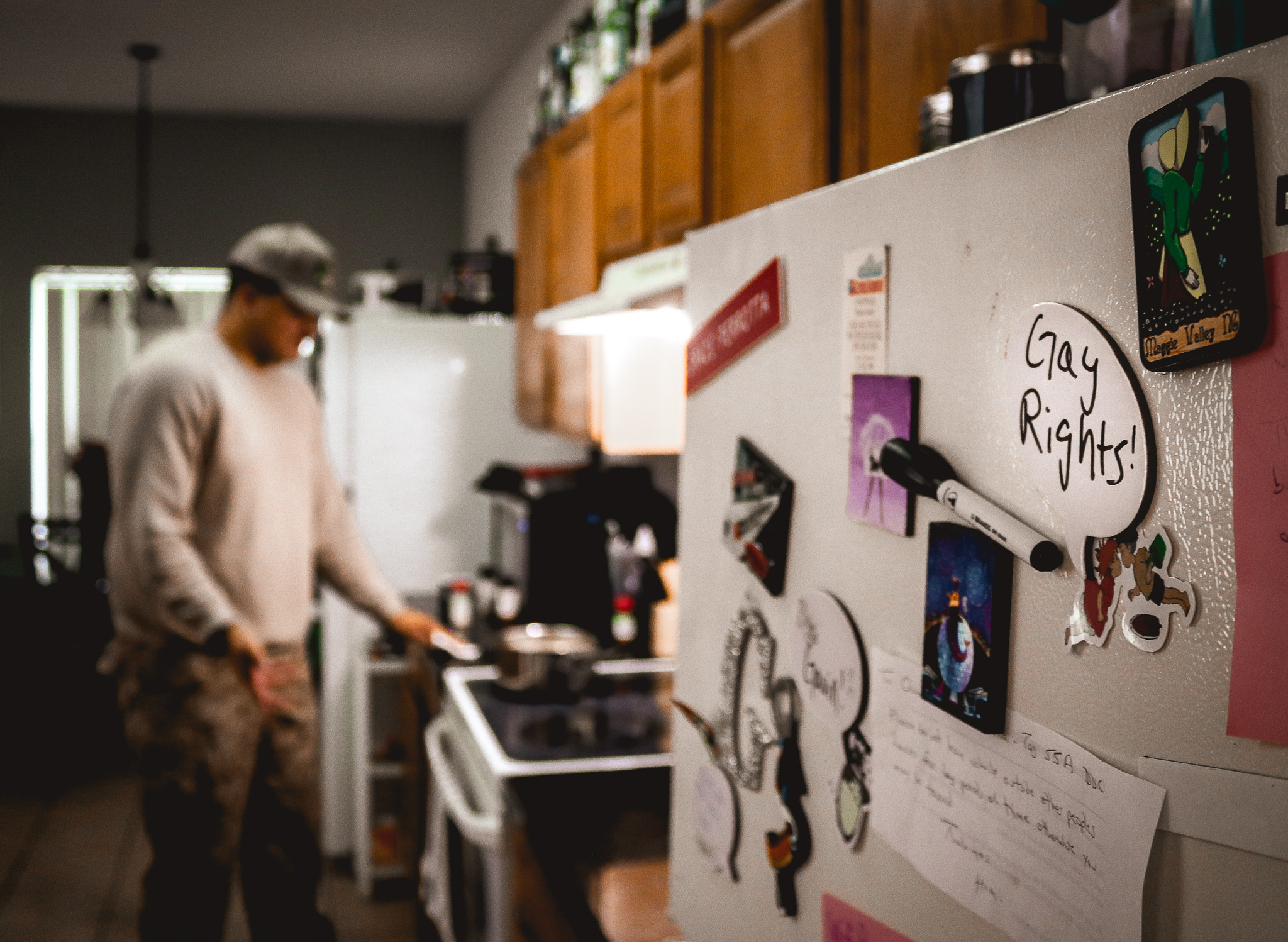 Shoels’ fridge sports a magnet inscribed with “Gay Rights!” as he prepares his lunch before rehearsal. [Credit: Preston Moore]

“The Conservative Black men in my family have all embraced me since I’ve come out, but I was afraid to come out to my dad,” Shoels said. “I told all my brothers and I guess they told my dad. He called me and he was pissed; not because I was gay, but because I didn’t tell him. He asked why and I said ‘Well, you say faggot regularly, do you think that makes me comfortable?’” 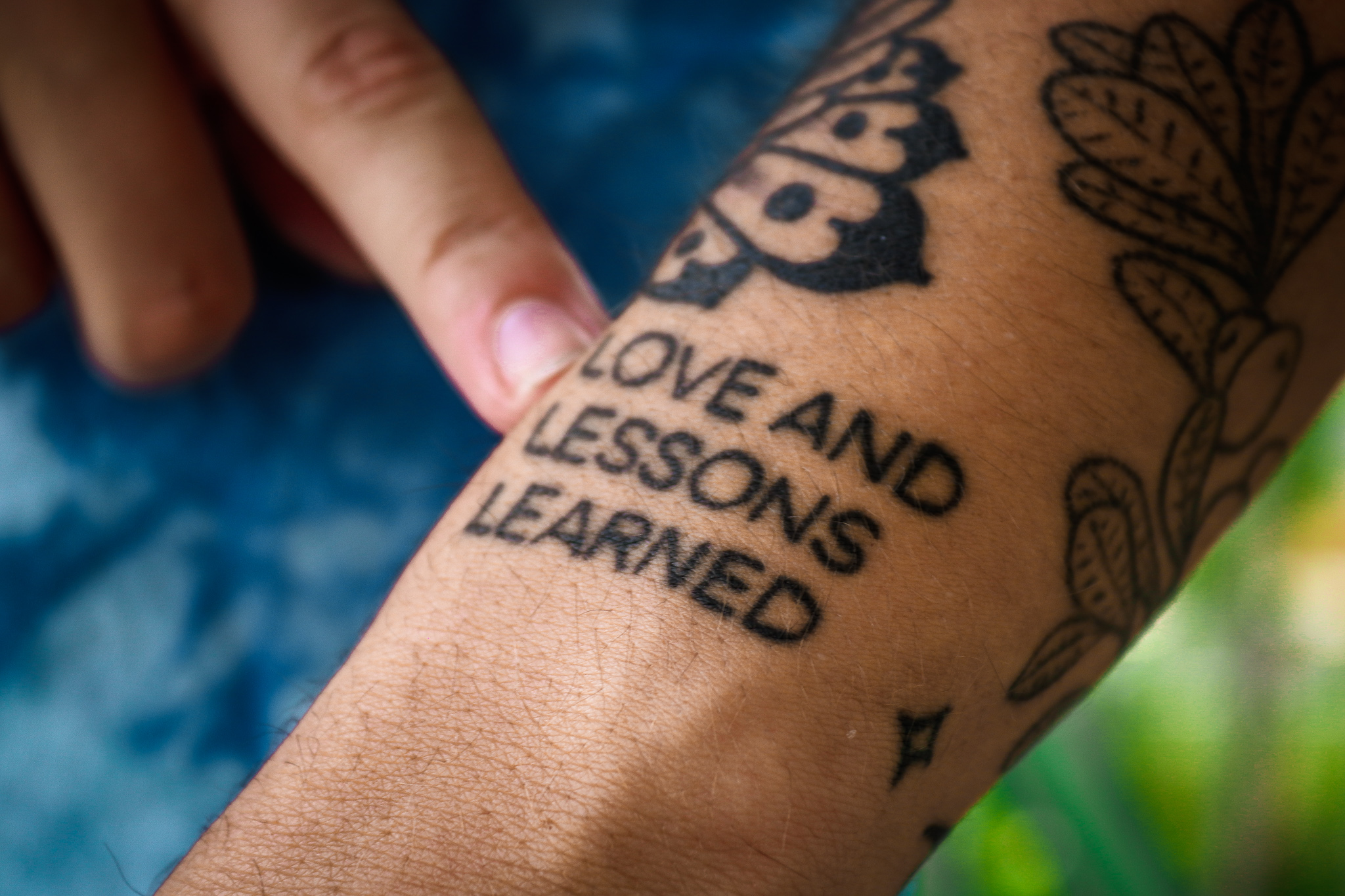 Pettus points out a tattoo of hers that says “LOVE AND LESSONS LEARNED.” [Credit: Preston Moore]

“I fall in love a lot, and I learn a lot from it,” Pettus said. “It’s so much easier to date a girl. There’s so much more understanding, but it’s so much worse when you break up because it flowers in this way that you can’t have with a man.” 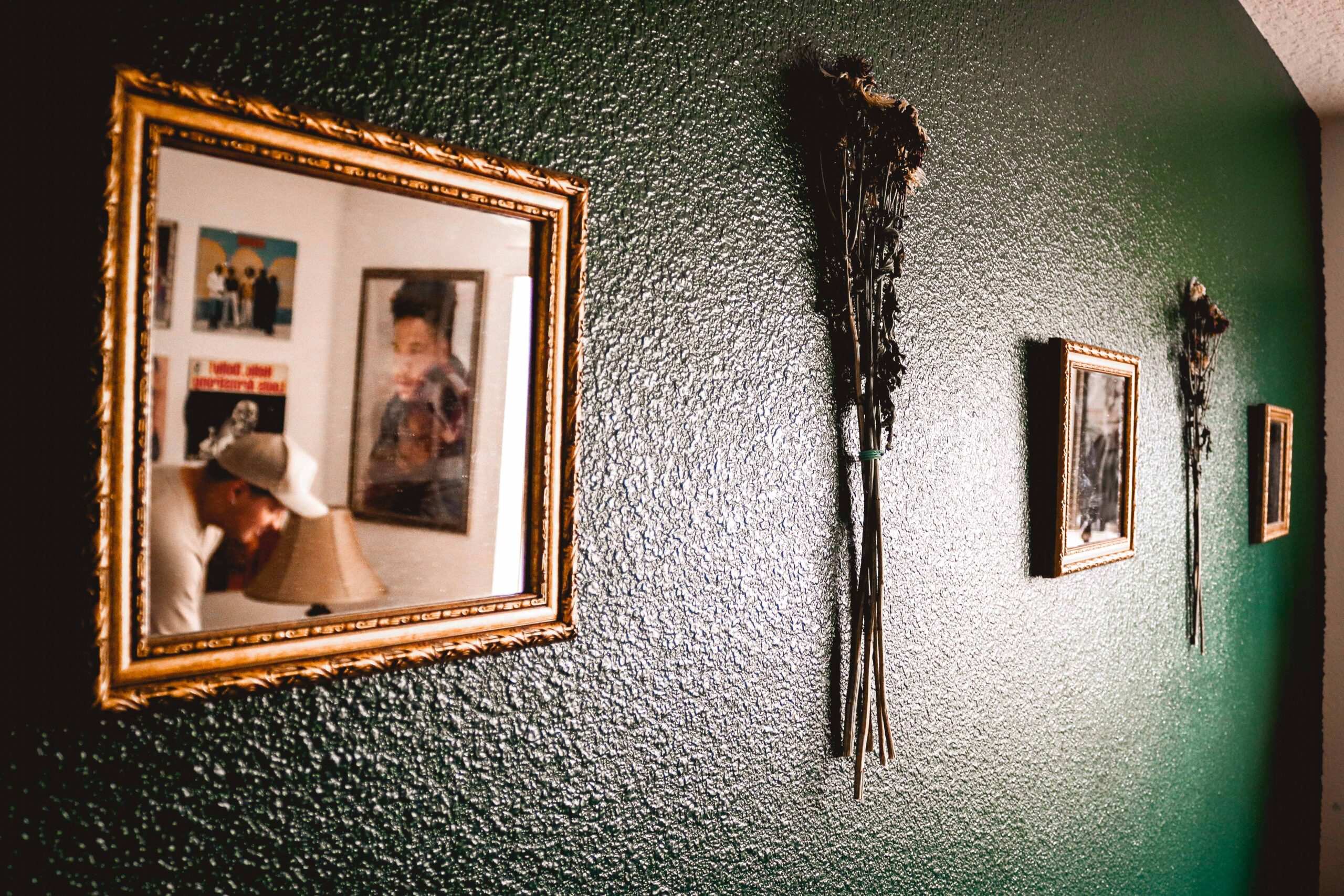 Shoels’ room, featuring a dark green wall. The wall stands adjacent to a large portrait of him cuddling his boyfriend, and opposite a wall with his record collection. [Credit: Preston Moore]

“My dad had a Lionel Richie record hanging on his wall and his walls were green,” Shoels said. “I wanted to create some of that. I think a lot about my dad and how his generation of men thinks about manhood. Love was taking care of your family, not hugs and kisses, because that’s too feminine.” 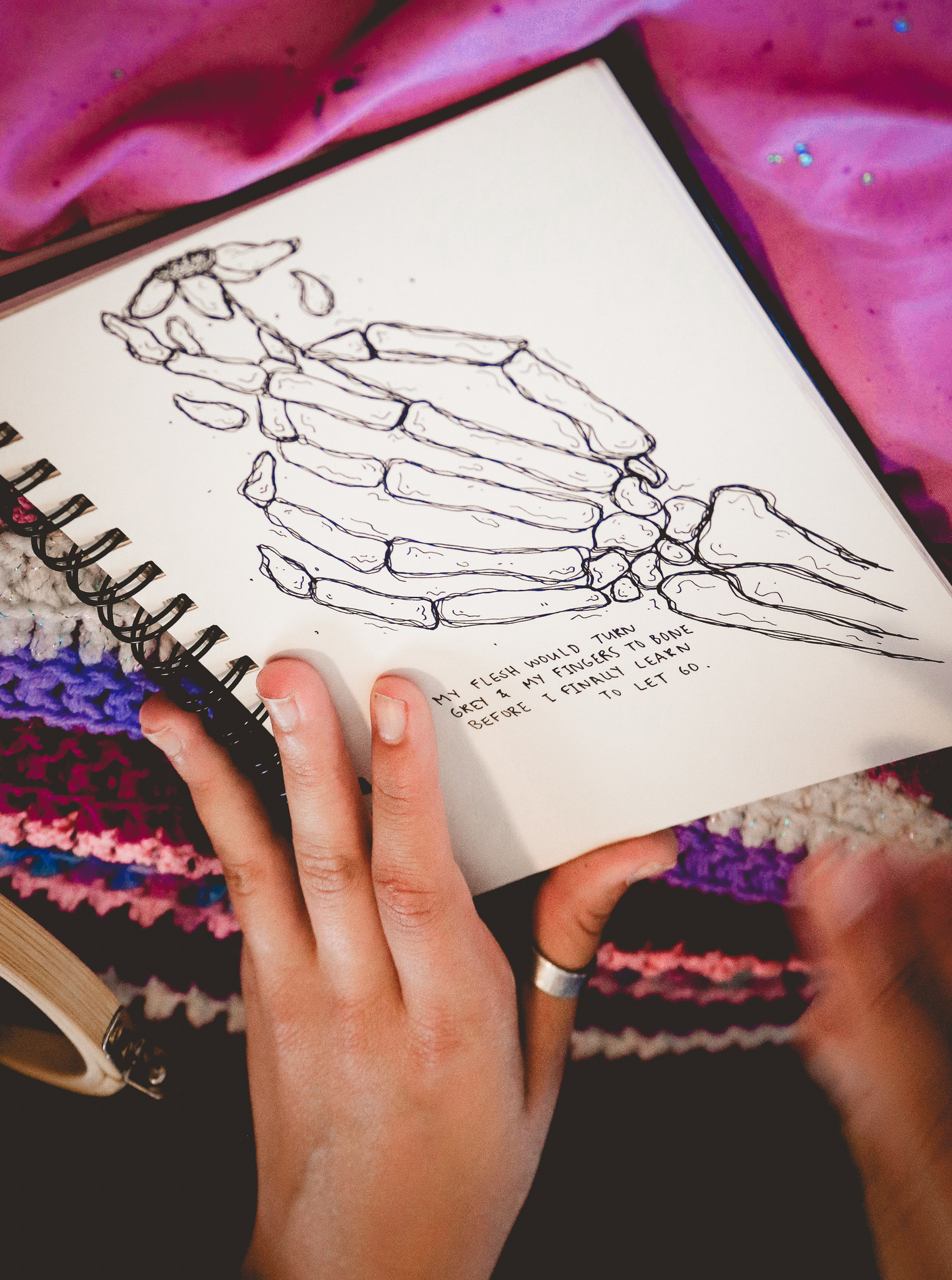 Pettus flips her journal to a page featuring a drawing that represents her first queer relationship. [Credit: Preston Moore]

“Sometimes I hold onto things that I know are dead, but I just hold onto it because it’s safe and comfortable, and it still feels pretty,” Pettus said. “I held onto that first queer relationship because it felt safe, even though I knew it was done. But I just couldn’t let it go.” 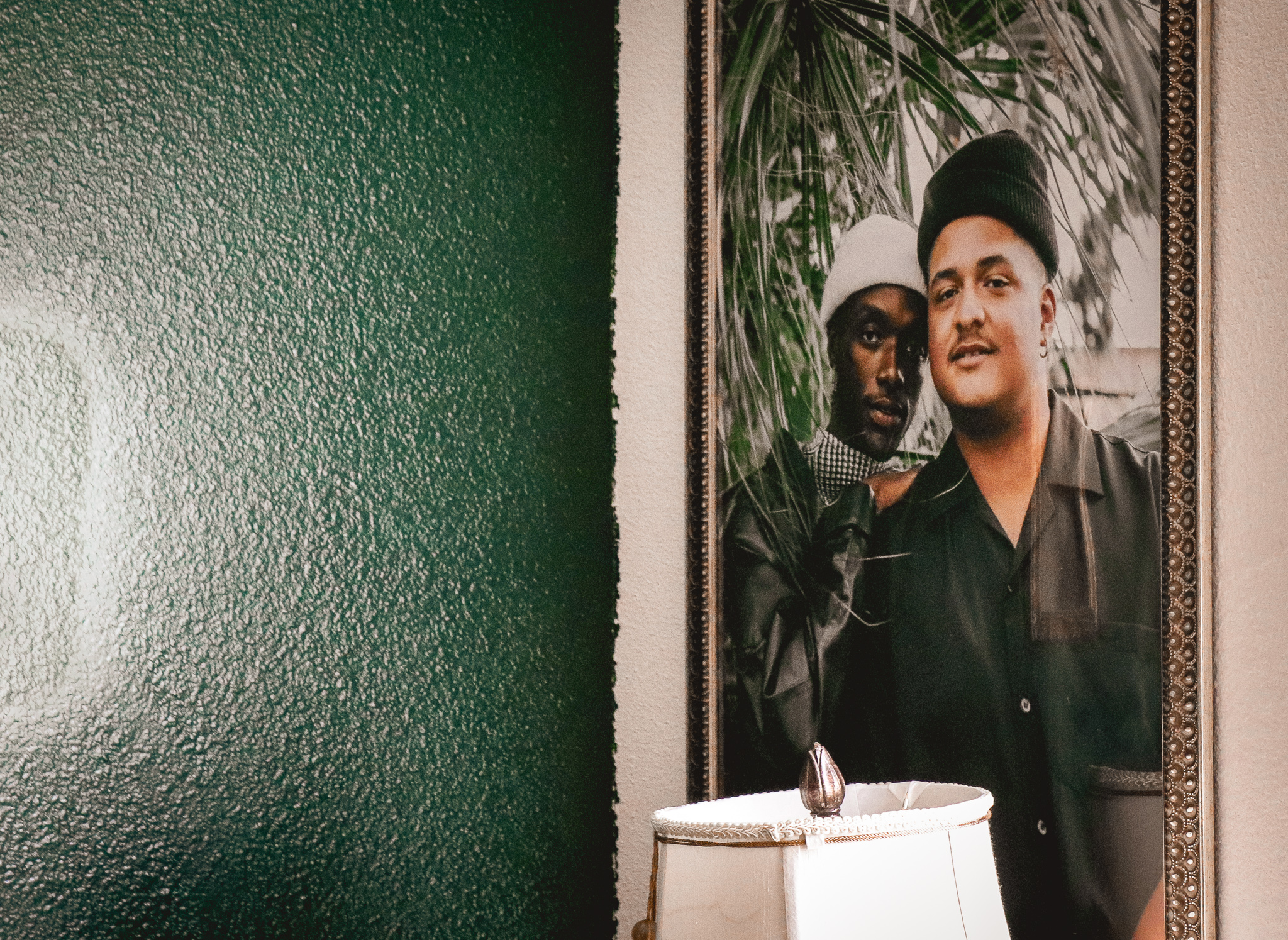 Shoels’ room with a green wall and framed portrait of him and his boyfriend, Justice Laws. Shoels shifted plans and moved to Florida with Laws in August 2021. [Credit: Preston Moore]

“I was supposed to be moving to New York, but I was like, ‘I’m dating this boy who says there are performance opportunities in Orlando… I’m just going to do it,’” Shoels said. “It’s literally the best decision I’ve ever made. I do want to do New York, but I’m so glad to be here. Like, I love it here.” 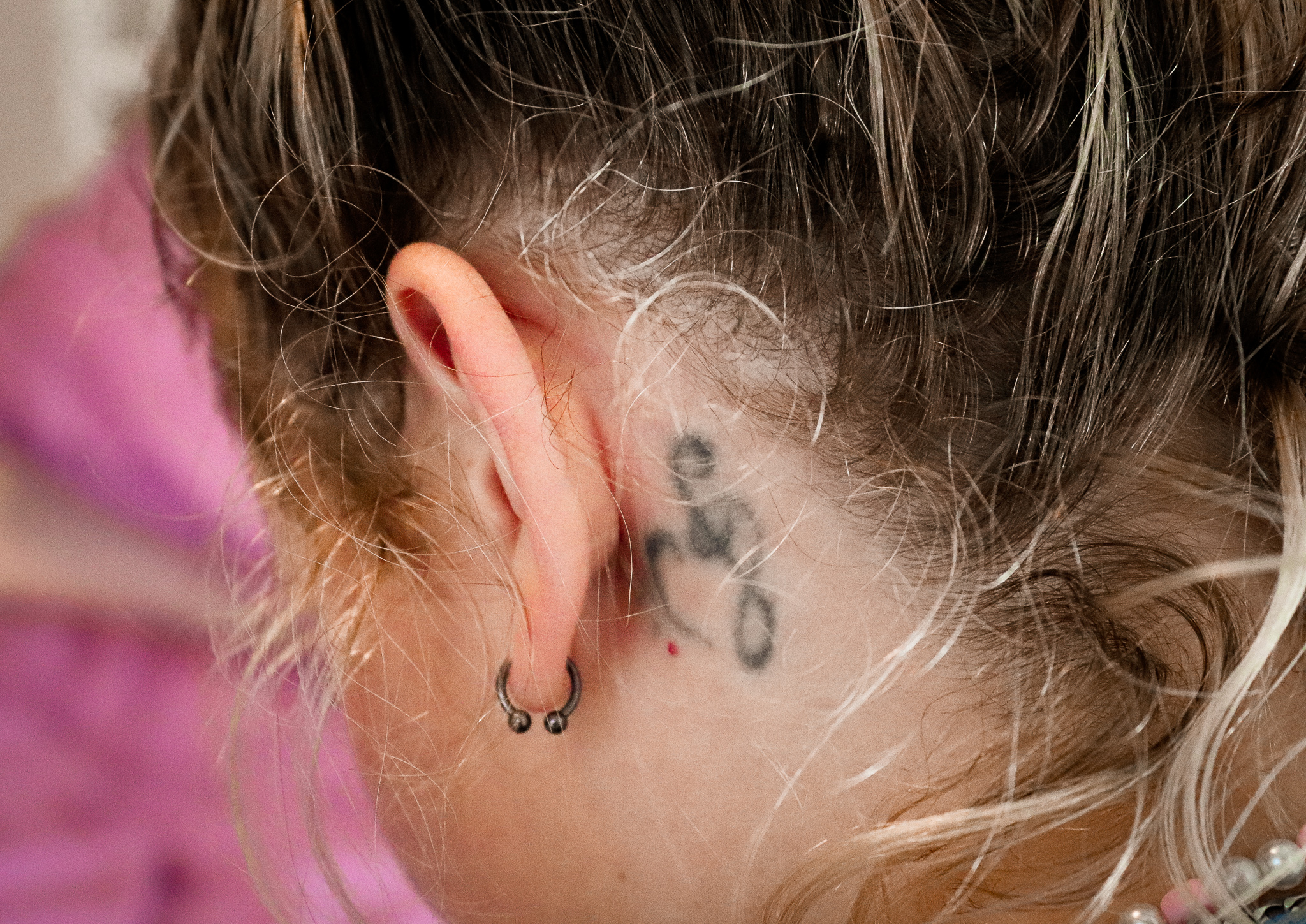 “I have really bad body dysmorphia, and I feel like my tattoos make me feel prettier,” Pettus said. “I got this when I was 15 at my friend’s kitchen table. It’s supposed to be music notes upside down, so they make a heart. I need to cover it.” 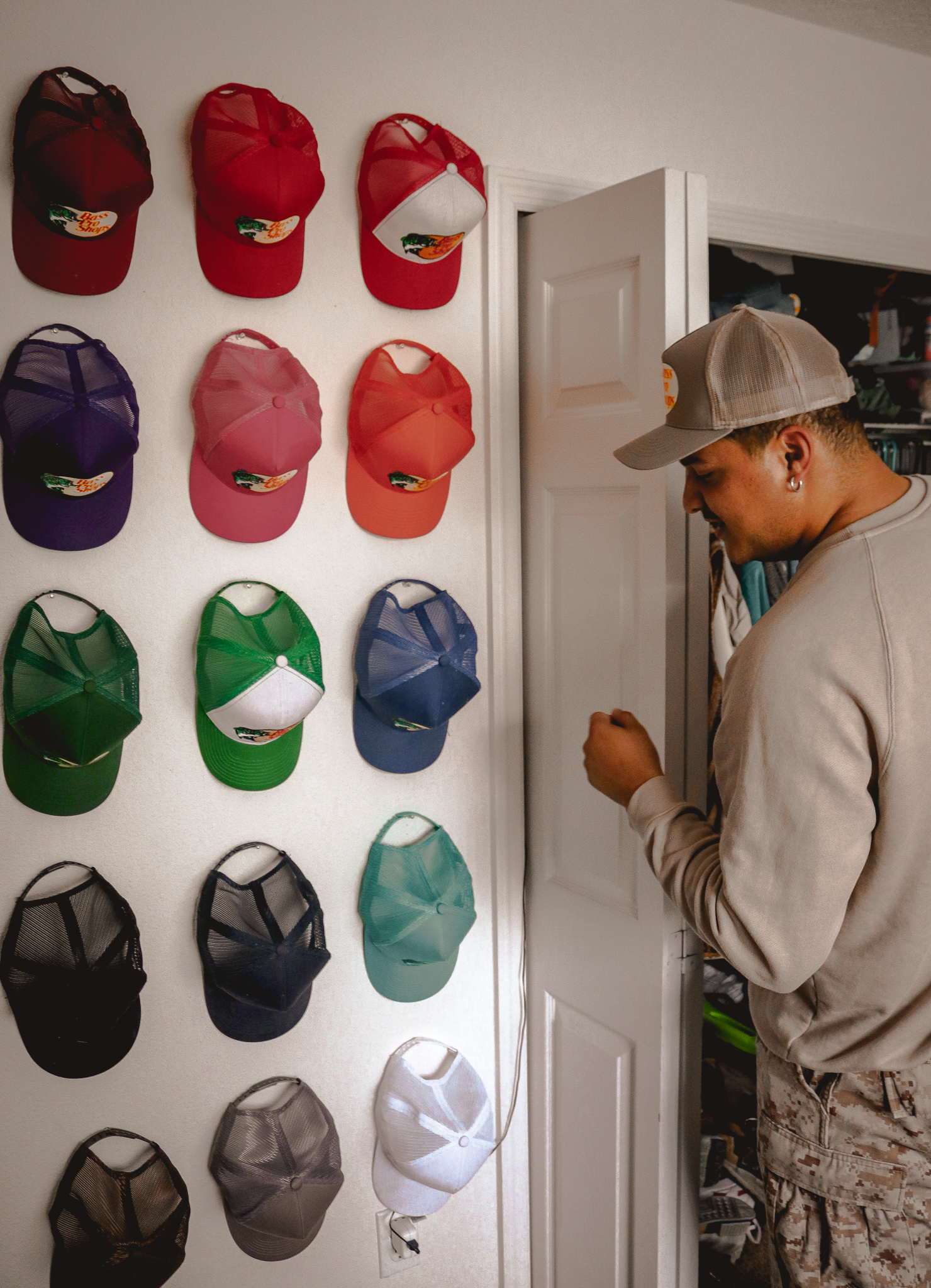 Shoels’ Bass Pro Shops rainbow hat collection, is proudly displayed on his wall and on his head. [Credit: Preston Moore]

“I officially have every color,” Shoels said. “I came here and had never been to a Bass Pro before, so you can imagine. I walk in, looking fabulous in there. I literally wore this purple scarf in there one time, and they’re like ‘Um, who is this?’” 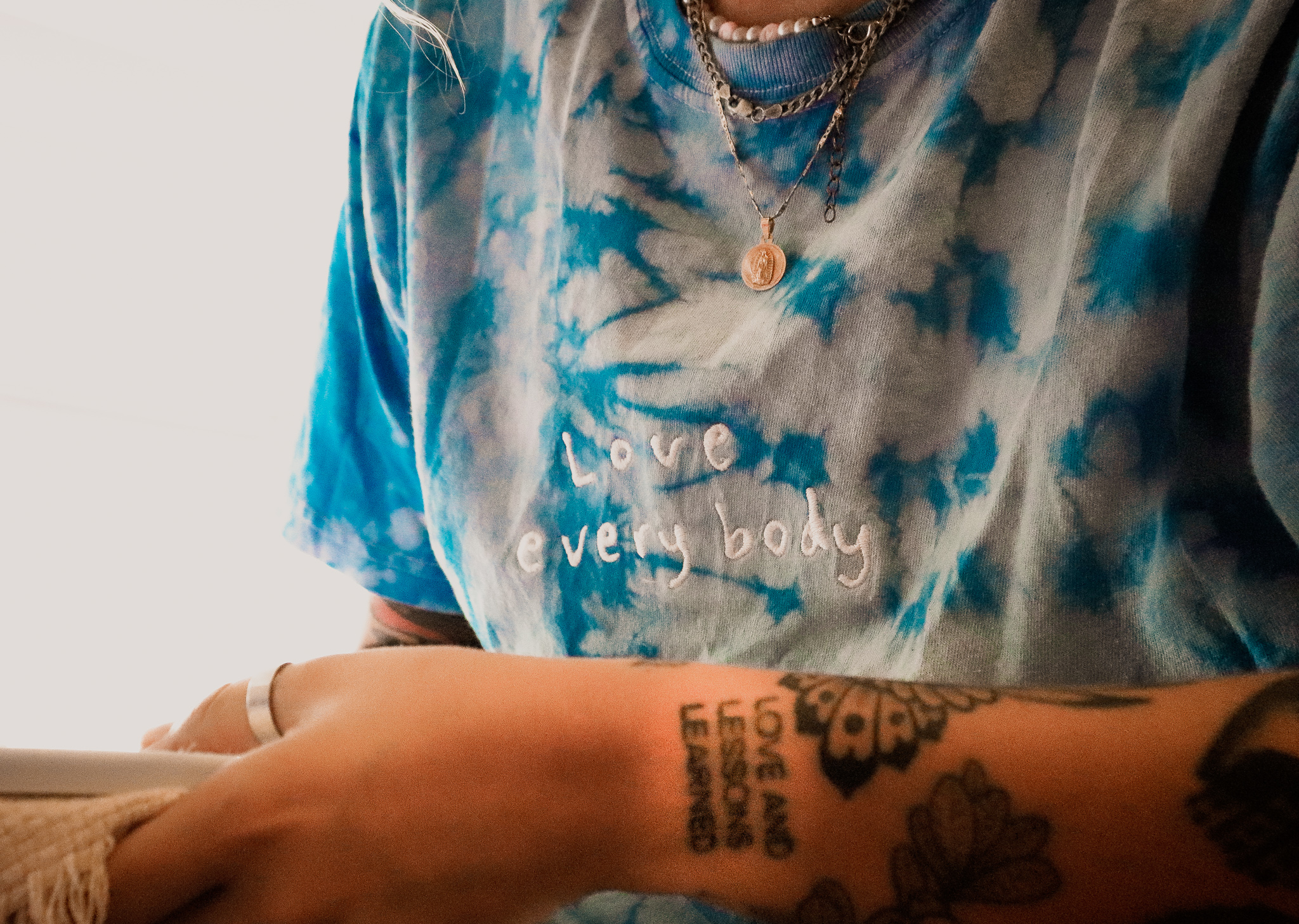 Pettus’ shirt with “Love everybody” inscribed in the middle, a mantra of hers. [Credit: Preston Moore]

“I would hope that whatever religion I claimed would be supportive of who I am,” Pettus said. “I wouldn’t want my God to not love me. My mom’s very Catholic and she loves me. If my mom can still love me for who I am, then so can homie in the sky.” 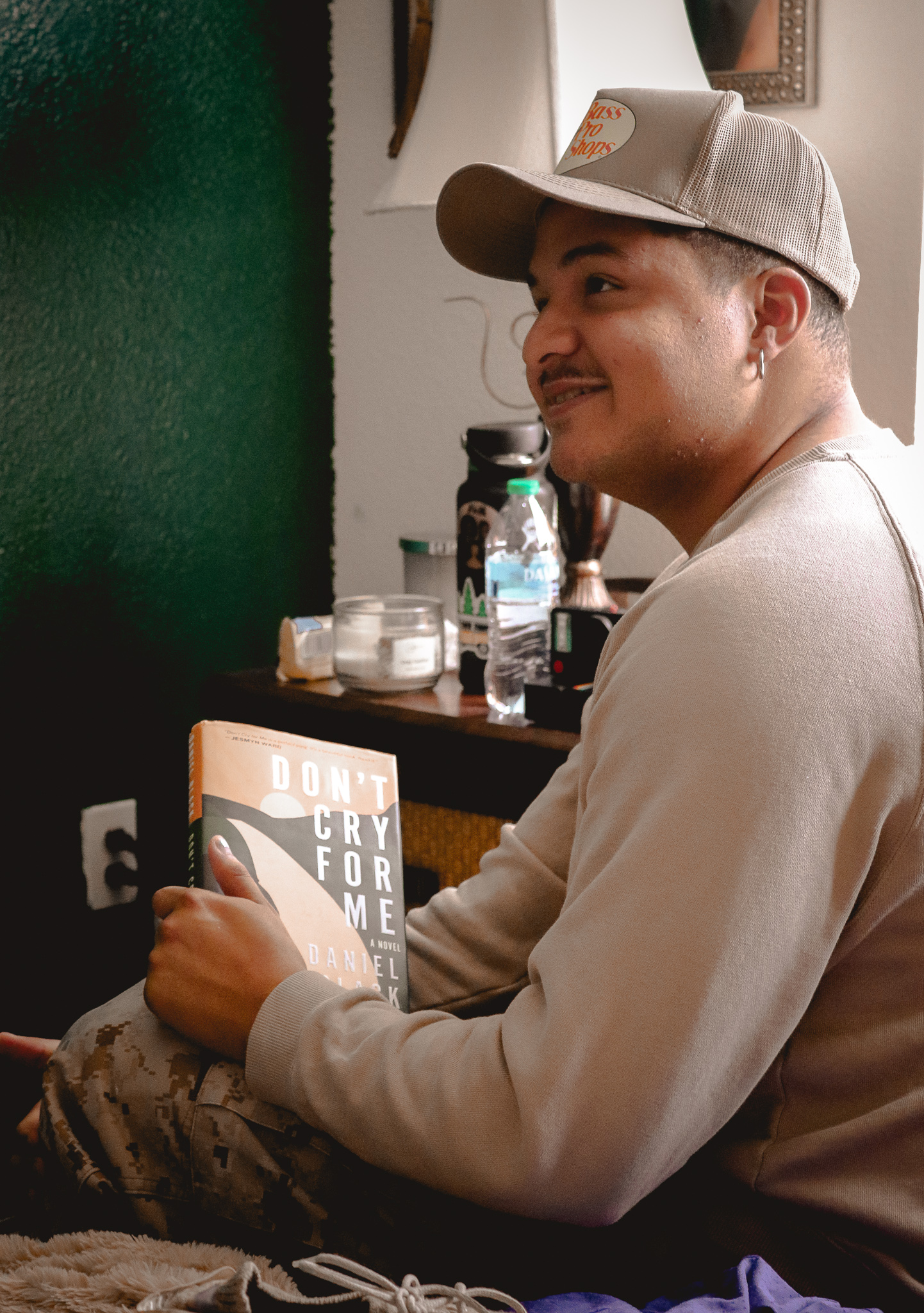 Shoels holds “Don’t Cry For Me” by Daniel Black, one of many in his book collection. Shoels began collecting books at Baylor University. [Credit: Preston Moore]

“I got a few of my books from Baylor,” Shoels said. “I’m still figuring out the whole spirituality thing. Most Christians are not against homosexuality but say, ‘that’s their thing, it’s between them and God,’ whereas it should be about embracing those people. It’s kind of half-assed acceptance.” 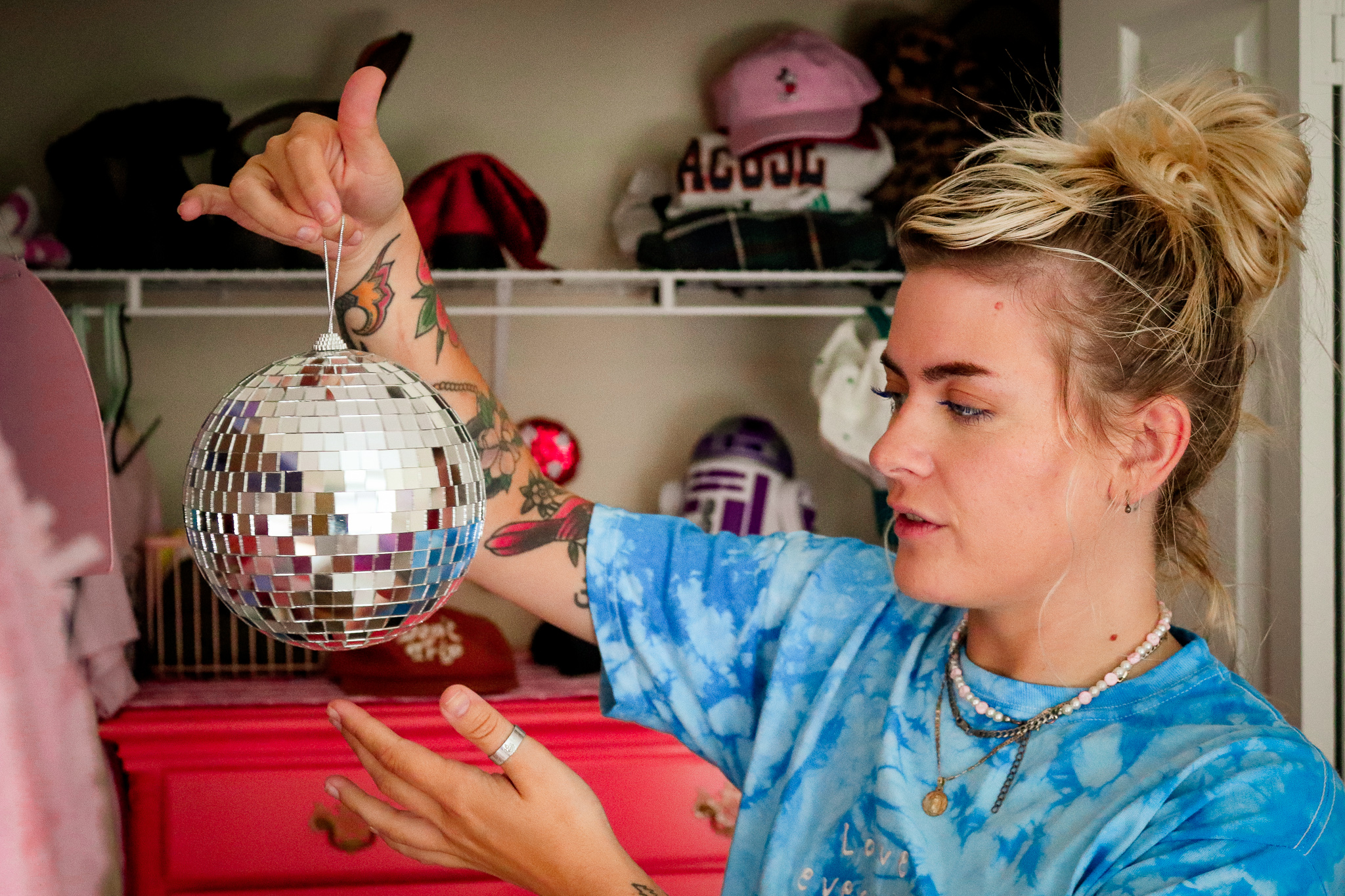 Pettus holds one of the few decorative disco balls she has in her room. [Credit: Preston Moore]

“I think life should always be a party,” Pettus said. “That’s why my room looks like this shit. I have a fucking birthday cake made out of yarn. I’ve got streamers everywhere. I also want confetti on my floor, but I feel like that would be a hassle.” 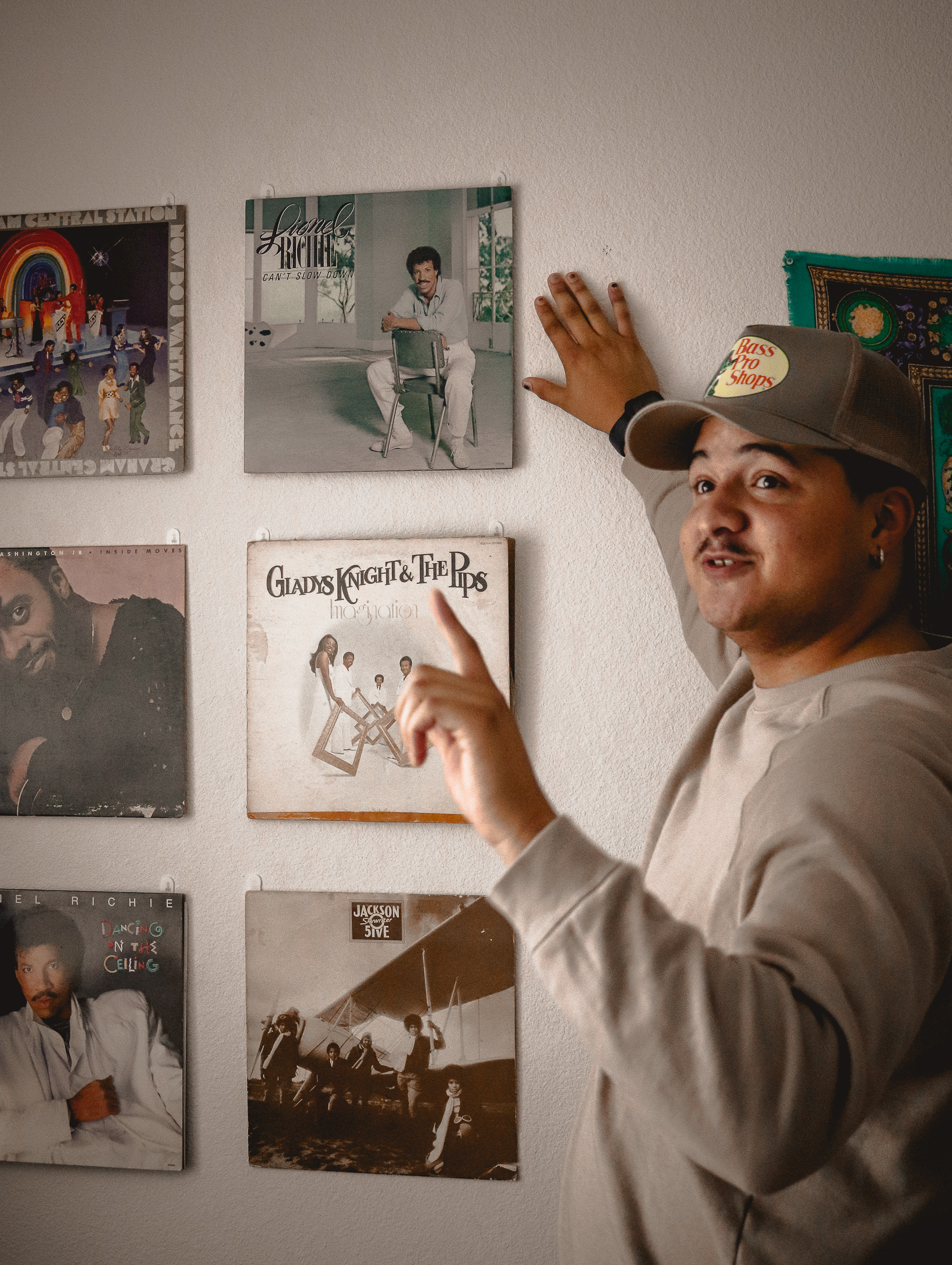 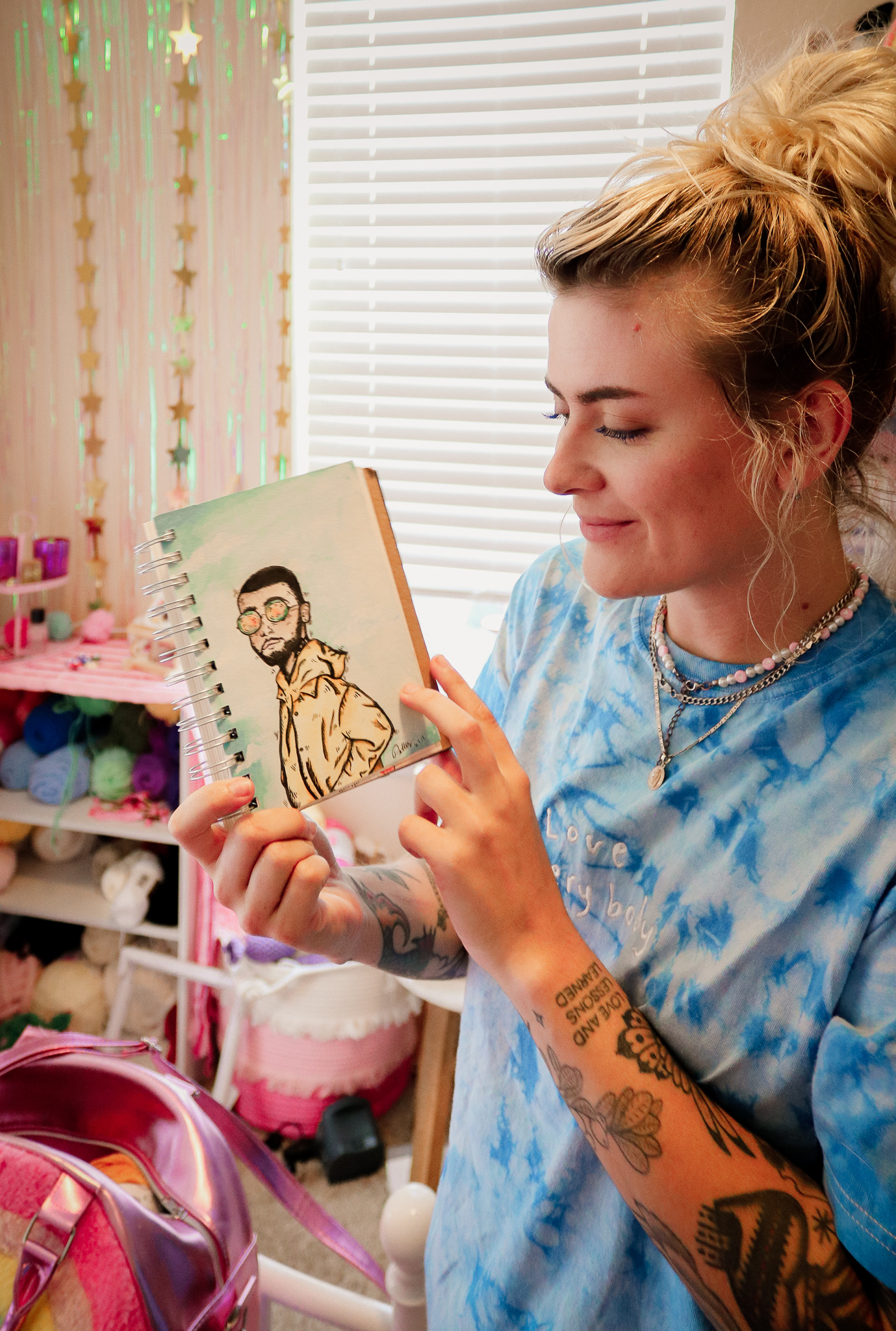 “This is my old sketchbook, I drew this picture of Mac Miller and he made it his Instagram profile picture for years,” Pettus said. “I have a hat that he wore. My friend got it for me because everyone knows I’m fucking obsessed with him.” 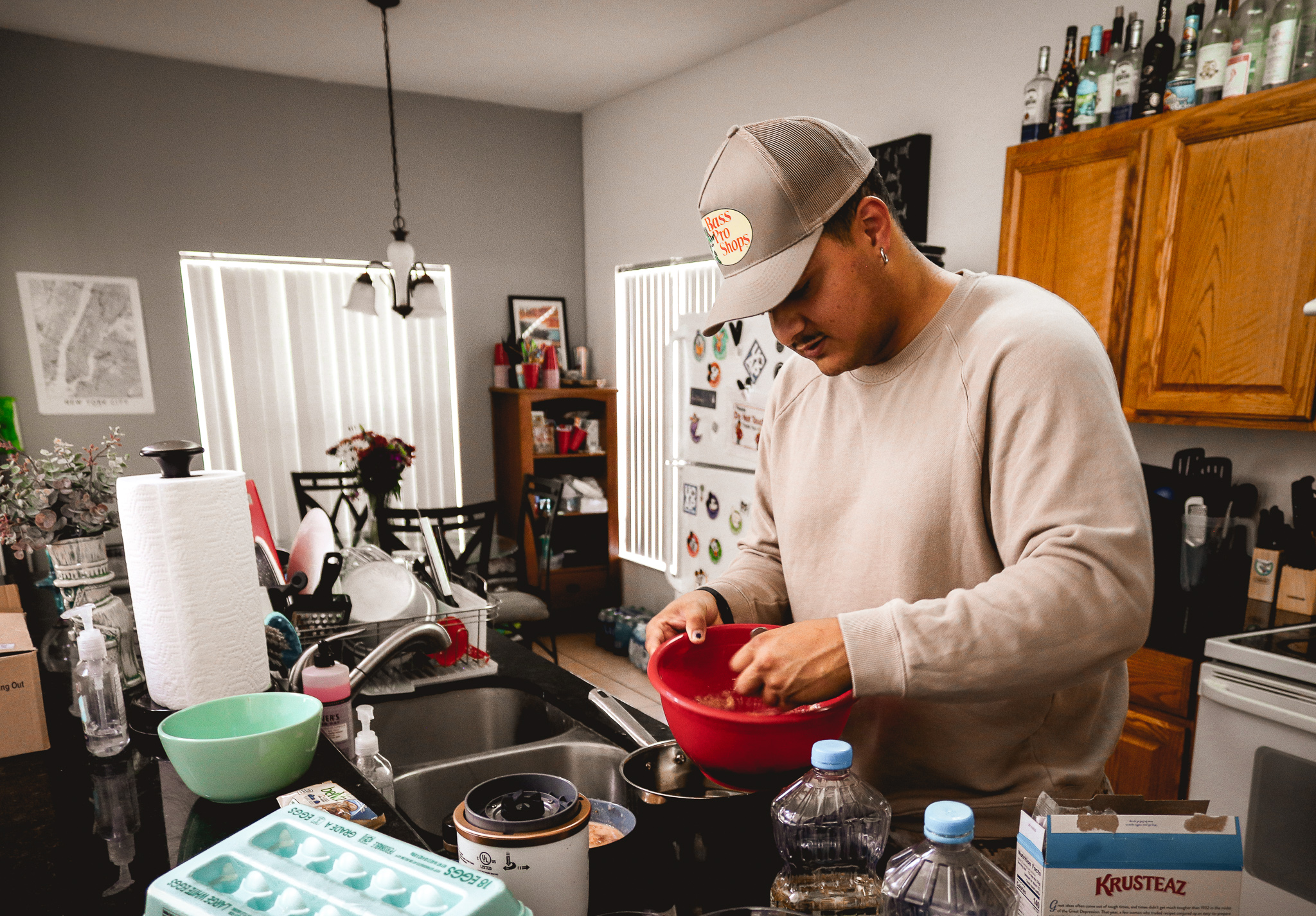 “It’s been interesting, living here on my own and learning to cook more,” Shoels said. “I’ve been trying to diversify what I can do with chicken, which, wildly enough is, cross-culturally, pretty interesting.” 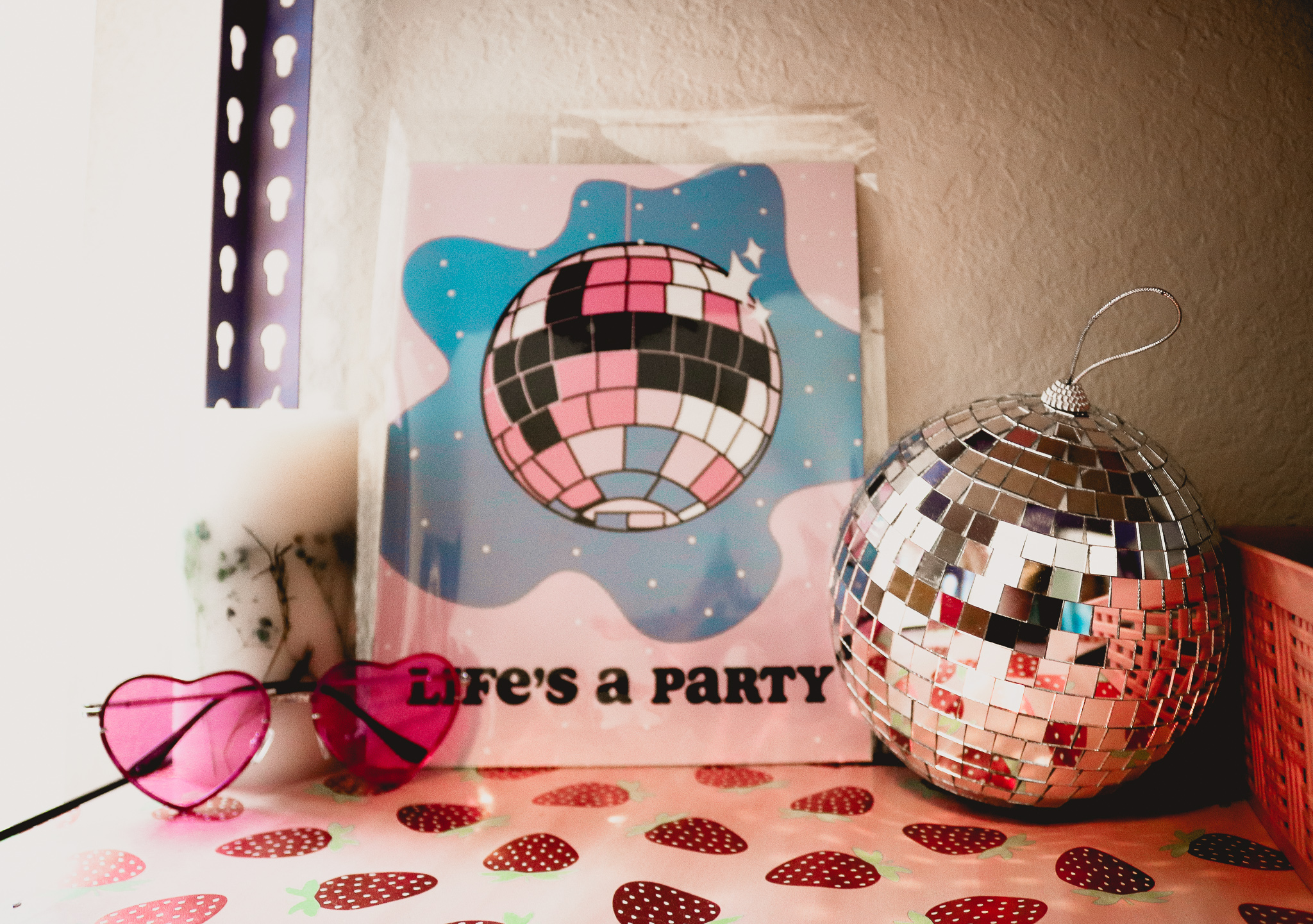 Pettus’ shelf, featuring another disco ball and pink heart-shaped glasses. She recently began working a second job at Jellyrolls, one of the only bars on Walt Disney World property. [Credit: Preston Moore]

“I just think life should be exciting,” Pettus said. “That’s why I got the job at Jellyrolls, everyone who works there is just so fucking fun. Then, I saw this poster that says ‘life’s a party’ in a store and I was like, ‘holy shit, I literally say that all the time.’” 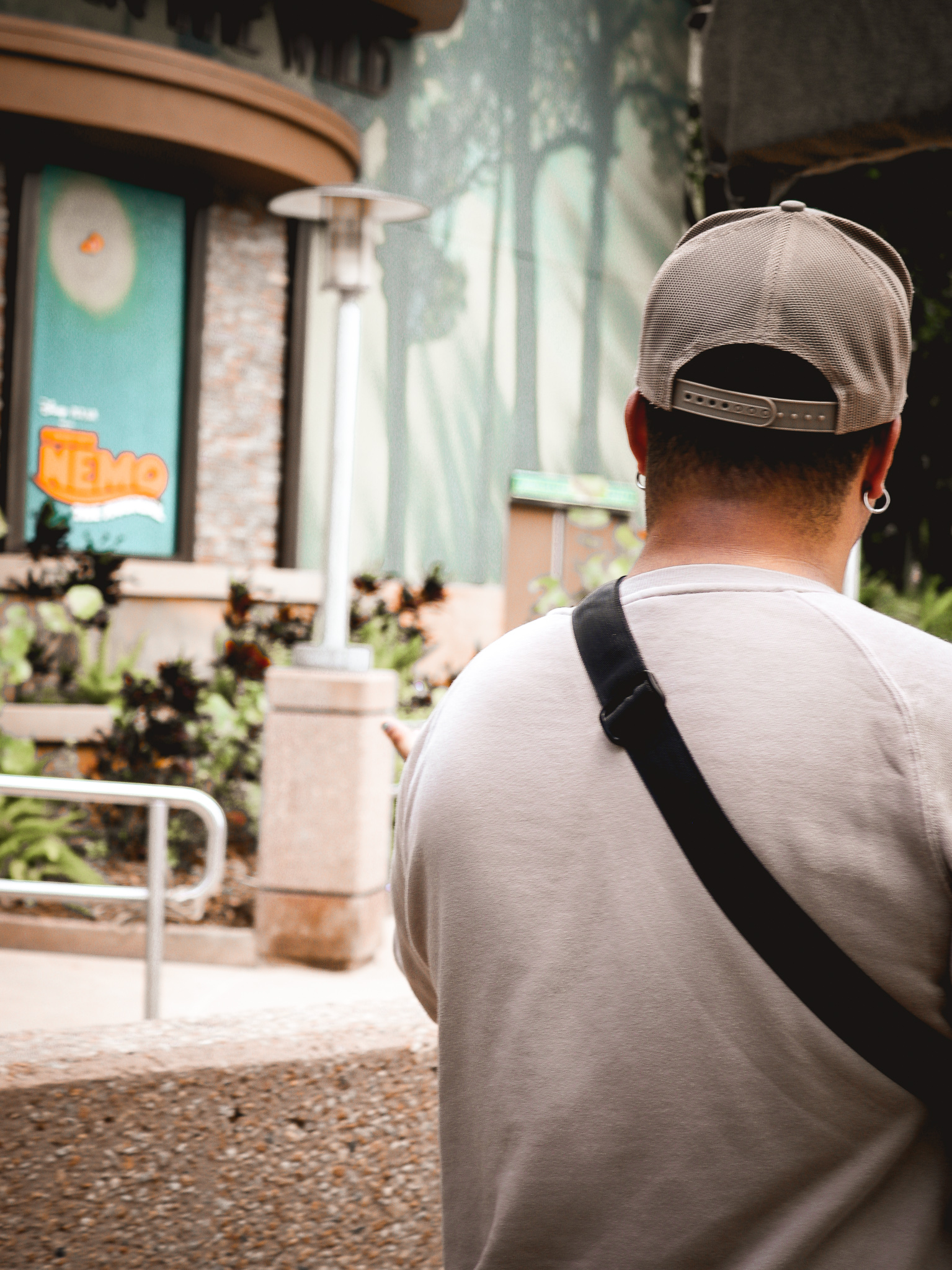 Shoels arrives outside of Theater in the Wild, reporting for his rehearsal of “Nemo.” [Credit: Preston Moore]

“Disney entertainment is just a blast,” Shoels said. “There’s a guy who’s 57, his name’s Tom. He has that James Dean type of old-timey vibe. I love him, he’s probably one of my favorite people I work with. Everyone working here is just so sweet.”