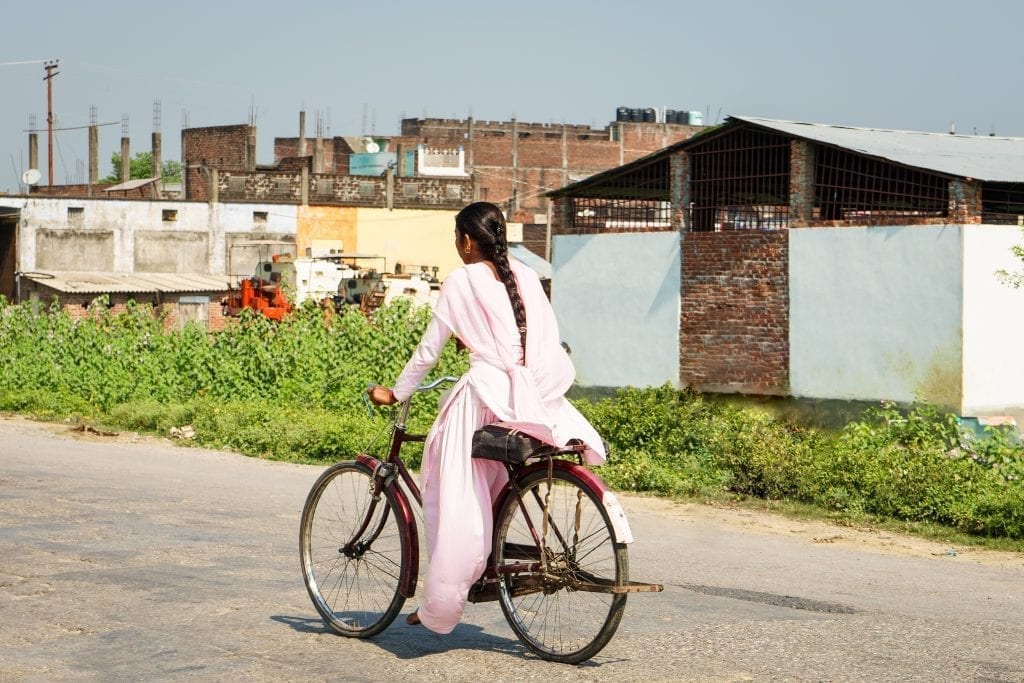 Media Criticism: Is a Documentary About a Rape in India Journalism or Art?

A woman rides a bicycle in the Indian countryside. (Photo by Thanmos via Shutterstock)

NEW YORK— “A girl is far more responsible for rape than a boy, ” convicted rapist and murderer, Mukesh Singh, says as he sits in a barren cell. He is one of the many people featured in the documentary “India’s Daughter.”

Leslee Udwin, the director and producer of this 2015 award-winning documentary has created a powerful piece;  but is it journalism?

India, which has banned the documentary, sees Udwin’s film as a smear campaign on the country itself. “This is not journalism. This is journalism turned upside down. This is unethical,” said Arnab Goswani, an Indian journalist who deems Udwin’s willingness to interview rapists against journalistic code. Leslee Udwin does not consider her work journalism either. “This was my first documentary, I am not a journalist—I am a feature filmmaker with 20 years of experience,” said Udwin.

Some traditional journalists would go so far as to say that documentaries can never be journalism due to its tendency to solicit emotions. Anne Hornaday—Washington Poster writer, and author of “Documentaries aren’t Journalism and There’s Nothing Wrong With That”—stated, “these films also obey the conventions of cinema, using visual language, music and editing less in service to neutral information delivery than to tell vivid, powerful stories.” There are even documentarians that agree with this notion.“Documentaries are not journalism; they’re not,” said documentary producer and director, Rachel Grady. “There are things in documentaries that you can not do in news, ever.”

In the U.S. Court of Appeals, Judge Timbers stated, “an individual successfully may assert the journalist’s privilege if he is involved in activities traditionally associated with the gathering and dissemination of news, even though he may not ordinarily be a member of the institutionalized press.”

But how many legitimate acts of journalism must Udwin commit to be promoted to journalist status? Some would say watching “India’s Daughter” is all you would need to deem her worthy of the distinction. If a violinist plays at Carnegie Hall once, haven’t they earned the right to be called a musician?

The term journalist seems to be a nebulous creature that clings to people when subpoenas are filed, or scurries away when libel is threatened. A Pew Research Center study on journalism characteristics defined a journalist as having core principles; dedication to the truth, loyalty to the public, supporting the facts and maintaining as much objectivity as possible. It may be obvious, but many journalists don’t commit to such integrity—in “India’s Daughter” Leslee Udwin does.

The documentary starts like any legitimate hard news story, with a lede based in fact. “On the 16th of December, 2012 at around 8:30 p.m a 23-year-old medical student was on her way home from a movie with a male friend,” it begins. “She was dragged to the back where she was gang-raped by six men as the bus drove round and round the highway.” The story told in the documentary was corroborated by the victim, one of the rapists, and surveillance footage of the bus, and later upheld by the Supreme Court of India.

The documentary then goes on to explore the cultural perceptions of gender and rape in India and the unparalleled upheaval this particular rape has triggered. In 2012 India’s Ministry of Home Affairs presented statistics that a woman in India reported a rape every 20 minutes. This alone proves the public importance of how Udwin’s piece exposes the truth of India’s cultural systems and gender beliefs.

The victim’s and rapists’ families, varying in viewpoints on gender, are interviewed revealing the grief on both sides. Udwin is measured in her treatment of the rapists, neither villainizing nor victimizing them. This is a difficult task when the five convicted men brutally raped and tortured the female student, removing her intestines, which led to her ultimate death days later.

Experts such as jail psychologists, lawyers for the defense and prosecution, scholars, judges, and government officials speak on many levels of opposing points of view during the piece. Udwin leaves it to the audience to interpret the data, facts, quotes, photographs, and footage as they see fit. It’s the same way a print journalist, who upholds themself to the highest standard of journalism, would present this information and disseminate it to the public to assist people in making their own decisions.

Does the film present rape neutrally? No, you cannot equate opposing rape beliefs as something to be considered with the same weight. As Christiane Amanpour, the Chief International Anchor for CNN, said that after covering genocide in Bosnia she learned, “never to create a false moral or factual equivalence. One cannot say that Udwin’s documentary is biased because it treats rape as a crime. Rape is wrong; this is not debatable.

In an interview with Udwin, a journalist from “Society Magazine“, said, “The film has been drubbed for being a bad case of bad journalism, for making fun of emotions and questioning the law and order situation in India.” Udwin defended her work as legitimate and said, “I am not making fun here, I am talking honestly about one of the most unjust opulent mindsets, there’s no humor involved in any of that.”

To see a source with your own eyes, to hear the tone of a quote, is this not just as honest and factual? An improvement in technology should not discredit valid journalistic work. This, of course, does not make all documentaries journalism, just as all print does not deserve that title either.

“India’s Daughter” comes close to negating the art or journalism debate but, like any good journalistic work, that decision is left up to the viewer.