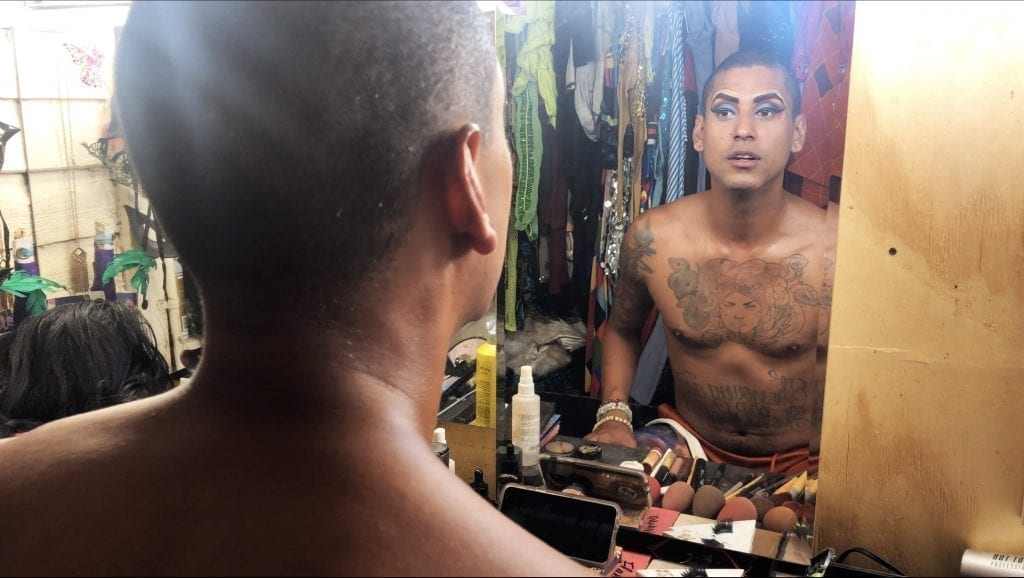 Jameson Rabbit applying his makeup backstage at the 801 Cabaret. Photo by Stephanie Leone

Drag Queens Reign as the New Faces of Key West

Jameson Rabbit applying his makeup backstage at the 801 Cabaret. Photo by Stephanie Leone

It’s a Saturday night in early October, and Key West’s famed Duval Street is surprisingly bare. But as you make your way south on the strip and enter Aqua Nightclub, you step into a different world bubbling with anticipation. Patrons pack in shoulder-to-shoulder hoping for a glimpse of the upcoming Vegas-style show.

The drag section of Duval— the “Pink Triangle”—stays busy no matter how much the Tourism Development Council insists this is Key West’s slowest time of the year.

Drag shows like the one at Aqua are flourishing as a new tourism staple in Key West. The widespread allure of drag queens has brought new audiences, but it’s also come with a shift in culture to this small town’s legendary drag scene.

In the early 1970s, gay men began to migrate to Key West as a haven from the prejudices of the mainland. Initially, there was some resistance and brutality from locals towards the “newest wave of invaders,” as the New York Times put it in their 1979 article. But soon after, local Key Westers—“Conchs”—embraced their much-needed business after the Naval station closed in 1974 taking nearly half the population of the town with it. In 1983 the Key West Business Development Council reported gay-owned guest houses brought in an average of $18 to $20 million yearly. The new “invaders” ended up receiving much of the credit for helping the tourism-based economy that continues today. 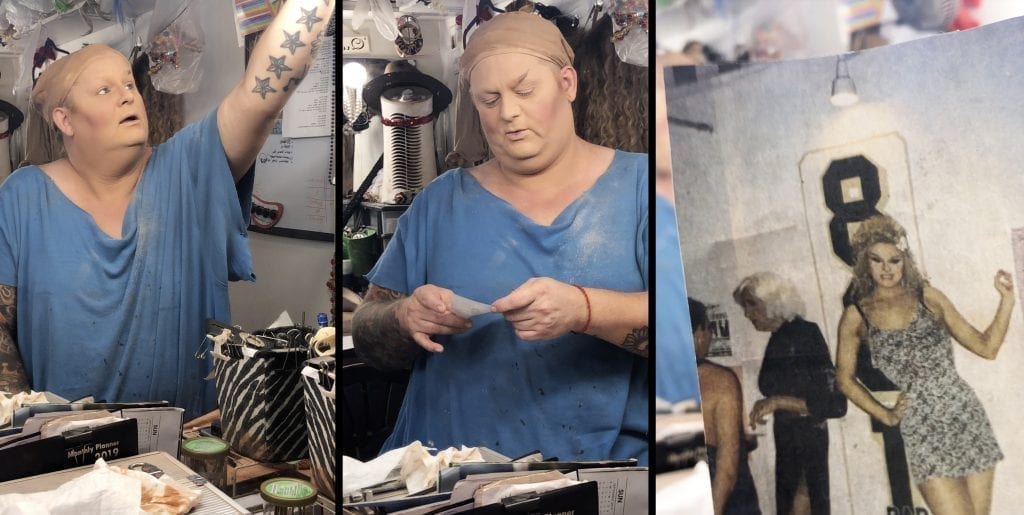 Roger Hultman (Inga) backstage at Aqua Nightclub showing a picture of himself from May 1997 in front of the 801 Cabaret. Photos by Stephanie Leone

In the 70s and 80s party heyday, queens only performed at benefits, occasionally at hotel bars, or “hot spots”—hourly performances of one song at nightclubs like The Monster and the Copa.
But when 19-year-old Gary Marion started cleaning at 801 Bourbon Pub in 1994, he saw an opportunity. “I kept on asking, let me do drag one night a week,” said Marion. “We did one Friday night, and it became the busiest night of the week.” The event, “Drag Your Friends to Friday,” was such a hit that owners Jim Gilleran and  Joe Schroeder bought the club across the street and commissioned Marion, now the famous “Sushi,” to run a full-time drag cabaret saying ‘this is yours.’” 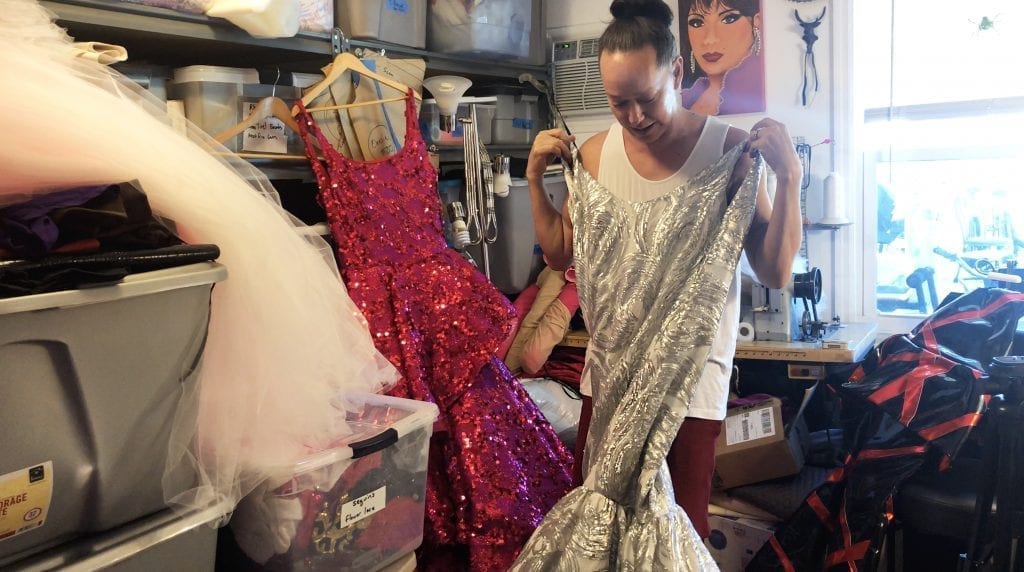 Gary Marion in his costume studio holding up the Chanel-inspired gown he created for his wedding day. Photo by Stephanie Leone

Originally Key West drag houses like 801 Cabaret were attended primarily by queer audiences and the large influx of gay tourists. But now the changing demographic of tourists and a wider acceptance has changed that. Daily cruise ships bring in new visitors for a one-day stop on the island. These passengers, predominantly from middle-America, then discover Key West in all it’s creatively odd glory and want to return again and again.

“You have middle-class straight people who wouldn’t step in a place like this 20 years ago,” said Rick Dery, a long-time bartender at Aqua.  “Now there are drag queens everywhere.” And in the past five to ten years the demand for drag shows has exploded, and there are now three, full-time drag houses in Key West; 801 Cabaret, La te Da, and Aqua.

Though the uptick in visitors has had a positive effect on ticket sales, it has slightly changed the fabric of the drag culture which previously mirrored preferences from their own gay community. “Now, it’s switched totally. It’s 80% straight, and 20% gay,” said Sushi.

Audiences are primarily bachelorette parties, couples, and families on vacation. “I’ve had to make it more mass appeal for some things. I still have things in the show that make me laugh and interest me in the show, otherwise, why do it?” said Randy Roberts, a headlining La Te Da drag performer. The stage director of Aqua, Roger Hultman “Inga,” has also added more straight-friendly pop songs and cleaned up raunchier content. With acceptance has come a booming business, but beneath that accomplishment is a loss of sorts—performances for them, by them. 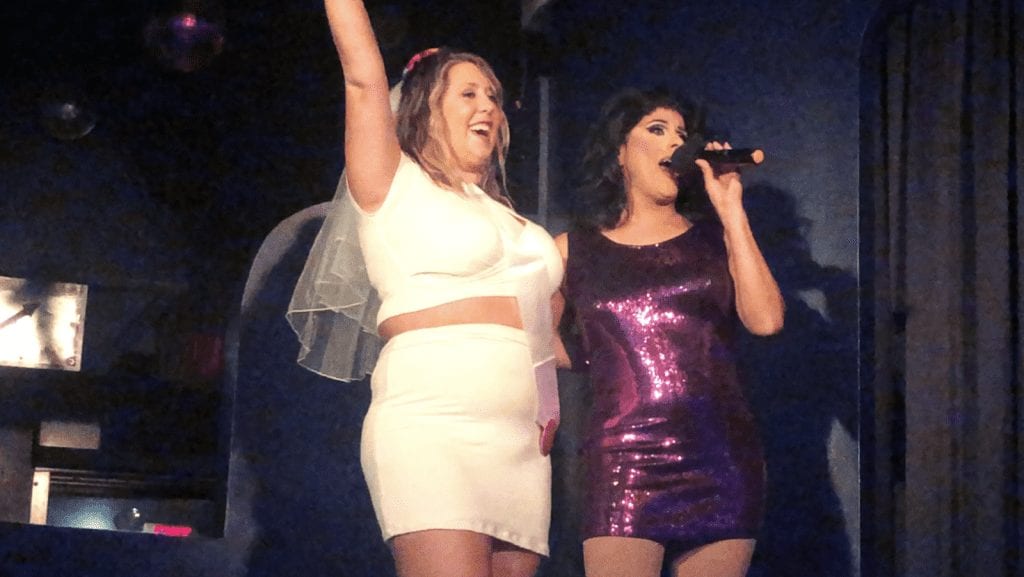 Faith Michael brings a soon-to-be bride up on stage at Aqua Nightclub. Photo by Stephanie Leone

With that change has come a greater responsibility to the tradition of queens as ambassadors of the gay community. “Especially the straight people, we try to open up people’s minds,” said Hultman. These shows for many are the first toe dipped into understanding LGBTQ people. “I’ll have a costume on, and they’re thinking, ‘Oh god, it’s a guy in a dress.’ And then they calm down, and within two or three minutes they forget I’m a drag queen and start realizing I’m a person,” said Michaels.

Current queens also uphold the practice of the 70s and 80s “benefit queens” who raised money for every fundraiser especially during the AIDS crisis on the island. They are still the first to raise their hands every time there is need for a charity. “Our drag community, they have led us and yes, they’ve also entertained us, but they’ve taken care of us, ” said Guy Ross,  Sales Manager of the Tourism Development Council.

In some ways, queens have become the face of Key West. Since 2012 CNN has nationally broadcasted Sushi as she is lowered annually in a giant red pump-style shoe on New Year’s Eve for the whole world to see. Hotel websites for “The Gates” and “The North Hotel” have drag shows on their suggested tourist attractions. Key West’s Randy Robert was featured twice on America’s Got Talent. “They’re celebrities,” said Bud Brewer, a local investor and well-known “Conch.” 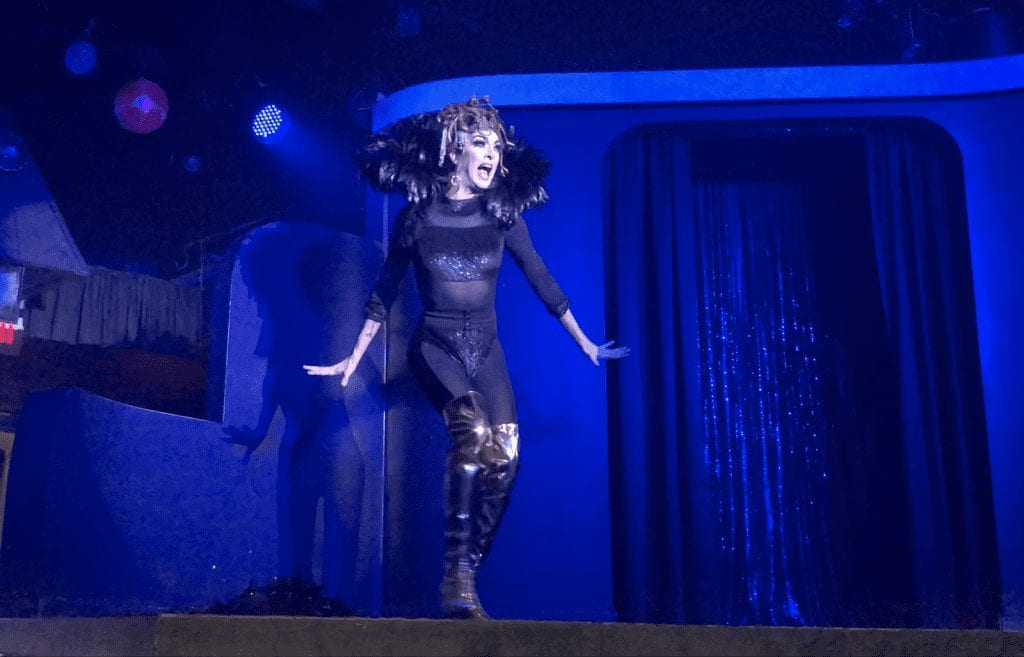 Key West has started to embrace its new representatives, having had around a dozen wigged queens in all their glory as “Citizen of the Day” in the local Key West paper.

“I think Key West has always had it [acceptance]. I think the rest of the world is just finally catching up,” said Michaels. Of course, drag wasn’t always embraced, even in the gay community much less by Middle American tourists, like it is today. Although the fight isn’t over in America for true acceptance, things were different for queens before RuPaul’s Drag Race, a drag queen TV show with 11 seasons, brought them to America’s living room.  They were a walking protest against gender norms when gay people were shunned from society. And some feel these mainstay drag institutions of Key West are still rooted in that traditional drag. A visiting queen from Manhattan, “Epiphany,” explained that these institutions are,“ the last gasps of what’s left of it, I think of gay culture in general.” It’s not hard to feel the grassroots quality to the queens of Key West who’ve battled for decades to be themselves and screw you if you don’t like it. 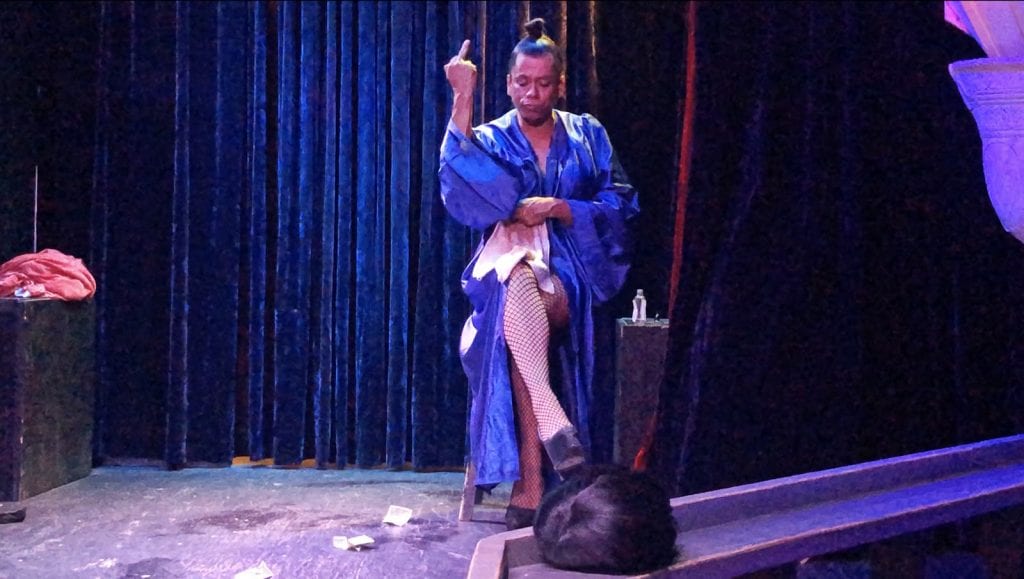 801 queen, Raquel, performing her rendition of “F*** You” Photo by Stephanie Leone

During the 11 o’clock number, that sentiment rings true at 801 Cabaret as “Raquel” performs a powerful lip-sync to “F*** You (Very Much)” by Lily Allen. While the song plays, he peels off his wig and lashes. He continues the transformation by shedding his female facade completely, wiping off the layers of makeup and taking off nearly all his clothes, letting the womanly foam underneath his stockings fall to the stage floor. People in the crowd quiet down from the raucous nature of the previous numbers. Seeing him bare-faced and human like the rest of the audience has a powerful effect.

As the late show audience spills out onto the still barren Duval, they bring a surge of energy with them still lingering from the show. One woman with a bachelorette party from Texas feels inspired enough to squeal, “I just wish I could be that confident!” Perhaps the exhilaration of a night spent on the “Pink Triangle” gives the queens’ new audience of tourists the infectious boldness to be a bit more themselves tomorrow—one can only hope.