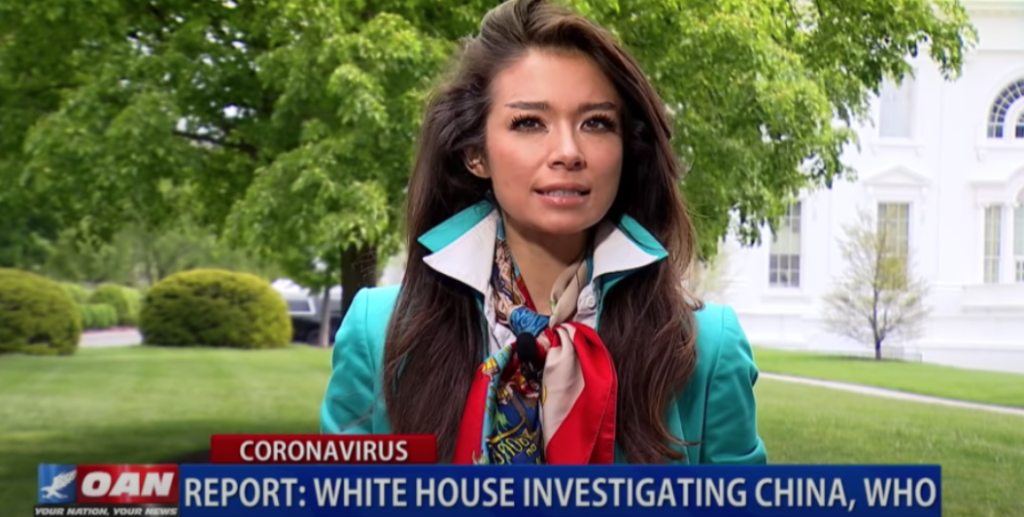 Chanel Rion of the One America News Network

Opinion: Is Chanel Rion of One America News a Journalist?

Chanel Rion of the One America News Network

Hours before the Republic National Convention, Chanel Rion, White House Correspondent for One America News (OAN), landed an exclusive interview with President Donald J. Trump. Did she ask him about his handling of the COVID-19 pandemic, or question him on the deteriorating economy? Did she address the trail of lies that have spewed from his mouth over the past three and a half years since he took the oath of office? Did she attempt to inform the public about any number of issues that are near and dear to Americans as we face an uncertain future?

No. Instead she lobbed a softball question designed to let him attack the media: “Their questions [are] often devoid of rationality, reason, decency,” Rion told the president.”Do you think these attacks against you in that briefing room–are they organic questions from individual, free-thinking people, or do you think that these journalists are afraid they might lose their jobs if they don’t attack you the way they do every day?”’

No one should have been surprised. Despite Rion’s being at the White House in the Briefing Room and sitting beside some of the top journalists in the country, Rion herself is no journalist.  She is a far-right conspiracist, anti-feminist book author, and political cartoonist who promotes propaganda through her work. For example, she accused Democrats of cannibalism and claimed Hillary Clinton was responsible for DNC staffer Seth Rich’s death. Her incendiary political cartoons include anti-Semitic depictions against billionaire philanthropist George Soros and she also claimed that ‘former FBI lawyer Lisa Page had an affair with former FBI Deputy Director Andrew McCabe” (Daily Beast).

With all the alt-right fawning, it’s no wonder that Trump often calls on the correspondent who asks him very “nice questions” and plays favorites with her employer OAN—particularly when Fox News fails to toe the political line. He has tweeted numerous times to his 80 million followers to ditch Fox News and watch the “brilliant and incredible” reporting at OAN instead. Though his dislike for legacy media like The New York Times and Washington Post is well-known, Trump is clearly enamored with OAN. He once said to journalists during a briefing, “We should get rid of about 75 or 80% of you. There’s only two or three of you I like.”

For the conspiracy-loving president, Rion would likely be at the top of that very short list. One of her segments promoted a conspiracy that COVID-19 was formed in a North Carolina lab; her source was a Qanon supporter. She also asserted that Dr. Anthony Fauci helped fund the coronavirus. She, along with other OAN reporters, continues to spread misinformation uttered by Trump, lies that have been fact-checked, and number over 20,000 since he came into office.

Rion’s softball questions are framed to make the President seem faultless and his opponents dangerous. In one March press briefing, she defended Trump’s racist comments, minimized the President’s culpability, spread propaganda, and undermined the media: “Mr. President, do you consider the term ‘Chinese food’ to be racist because it is food that originated from China?”

Trump responded: “I don’t think that’s racist at all.”

Rion continued: “On that note, major left-wing media, even in this room, have teamed up with Chinese communist party narratives, and they are claiming you are racist for making these claims about ‘Chinese virus.’ Is it alarming that major media players, just to oppose you, are siding with foreign state propaganda, Islamic radicals, and Latin gangs and cartels and they work right here out of the White House with direct access to you and your team?”

In a May press conference, she compared COVID deaths to abortions: “2,405 Americans have died from coronavirus in the last 60 days. Meanwhile, you have 2,369 children who are killed by their mothers through elective abortions each day. That’s 16 and a half thousand children killed every week.” She referenced Texas and Ohio as two states who had suspended abortions. “Do you agree with states who are placing coronavirus victims above elective abortions and do you think other states should do the same?”

Even Trump sidestepped the question.

Rion has aided the administration in the de-legitimization of the Black Lives Matter movement by broadly describing protests as riots and prioritizing authoritarian-like police enforcement over civil liberties. On June 2, she tweeted, “You either side with Law & Order or you side with Rioters. In Minneapolis police departments were burned, small businesses destroyed, local economy devastated. Team Biden bailed out the rioters.” On Rion’s website, she describes herself as a “fierce foe of anything Clinton, of everything Obama, and as a total and unrelenting enemy of academic left-liberalism and political correctness anywhere—she’s out to stamp it out and when Chanel skewers the enemy, it can be a powerful thrust—sometimes shocking, always articulate—linguistic and graphic gems that strikes the heart of the insanity of the political left.”

Prior to becoming the White House correspondent, she accompanied Rudy Guiliani to Ukraine with the intent of spreading misinformation on Joe Biden. And has also been a guest at Trump’s Mar-a-Lago resort. Right before receiving her press pass, she changed her name from Dayn-Ryan to Chanel Rion. In April 2020, the White House Press Association banned Rion from the Brady Press Briefing Room because she would not abide by social-distancing protocols. She kept attending despite the WHPA’s health guidelines that networks must rotate visits and only assigned reporters—14 at a time—are permitted in the room. According to Rion, White House Press Secretary Stephanie Grisham had personally invited her.

Later that month, Rion created the “National White House Correspondents Association.”According to the right-wing news site, NOQ Report, the NWHCA’s mission is to “bring more balance and diverse questions in the White House briefing room; foster meaningful discussion and debate at the White House, and restore free and open press coverage in the briefing room and coverage of the White House.” According to her LinkedIn profile, Rion is the founder of NWHCA, which appears to have no online presence.

More interested than spreading alt-right ideology than substantiated facts, Chanel Rion is a propagandist for the President, a right-wing enabler, and a voice for Trump’s base.

Among the posts Rion has re-shared includes the downplaying of the pandemic, the misleading notion that the economy has recovered, and the unfounded claim early in the pandemic that there were vast amounts of testing and ventilators available to hospitals throughout the country. On April 27, she posted a photo of Trump in the Rose Garden with a banner Opening Up America Again next to him and tweeted: “Consistent decline in cases across major cities/Every Gov has more ventilators than they know what to do with.”

Yet as of April 26, the U.S. had had the highest count of new cases since the start of the pandemic; April 27, the second-highest. In a paper from The Lancet on April 20, ventilators were in short supply and there was a pressing need to fulfill the demand for anticipated cases. Citing the Defense Production Act and the White House’s capacity to supply an adequate number of ventilators, the study noted, “The Administration has refused to engage in coordination, suggesting that it is not yet needed.” By late July, ventilators were no longer in short supply, but the DPA was still not executed to its full capacity in order to stock what states’ hospitals needed—N95 masks, testing, swabs, medical supplies.

OAN owner Robert Herring, Sr., barred any reporting that mentioned Trump’s poor performance in the polls. The channel pushes out propaganda like the rumor that Martin Cugino, the 75-year-old Buffalo Catholic peace activist who was assaulted by the police, was an anarchist and member of Antifa.  Pieces on the “Biden bribe tapes” are intended to discredit the Democratic presidential candidate, but the Associated Press describes the tapes as “hardly a political bombshell” and quotes Nina Jankowicz, a disinformation fellow at the nonpartisan Wilson Center, as saying, “It’s certainly an influence campaign… It’s misleading to an audience that doesn’t have the full picture.”

OAN has admitted being pro-Trump, but despite the biased reporting, Herring asserts in an email to the Los Angeles Times, OAN’s White House coverage is meant “to provide fact-based coverage of the administration’s latest and breaking news.”

Citing more than a dozen current and former OAN editorial staff and executives, Marc Fisher of the Washington Post, says Herring has “directed his channel to push Trump’s candidacy, scuttle stories about police shootings, encourage antiabortion stories, minimize coverage of Russian aggression, and steer away from the new president’s troubles.”

Chanel Rion is a White House Press correspondent and a featured reporter for a cable news channel; however, her biased allegiance to the President and the alt-right removes any semblance of objectivity. As a proponent of propaganda and conspiracy theories, Rion undermines what it means to be a journalist especially when she purports to be speaking the truth.