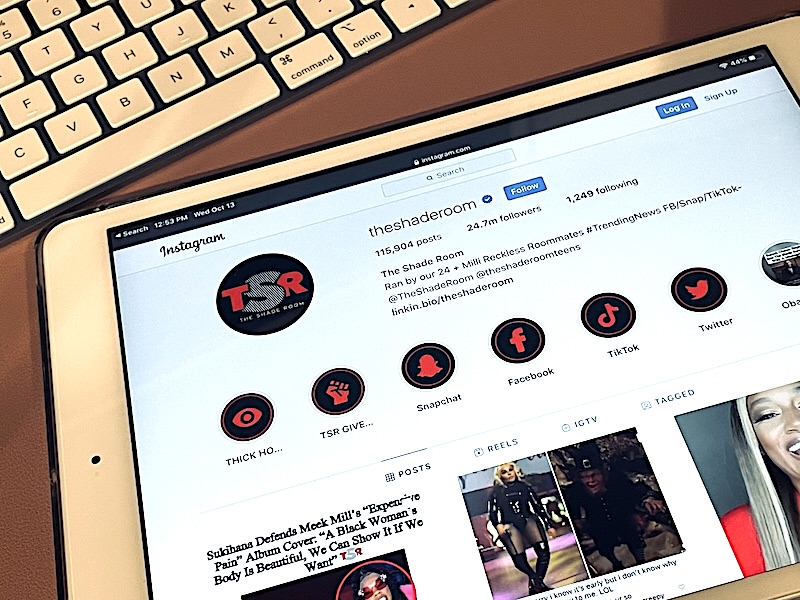 Examining ‘The Shade Room’: What Counts as Journalism?

Social media platforms over the past decade changed the landscape of how news is consumed. In the journalism industry, entertainment news and celebrity gossip constantly fight for respect and legitimacy. The question of what constitutes “news” remains a debate often focused on whether to include or exclude entertainment coverage. Before the rise of social media, entertainment news had “gossip rags” that cluttered the checkout aisles at supermarkets. Now, it is Instagram pages with hundreds, thousands, and millions of followers.

The Shade Room, often shortened to TSR, is an Instagram-based media company founded in 2014 by Angelica Nwandu which has become the blueprint for the blurred lines of journalism in the age of social media. TSR is an image-based, celebrity news offering with predominant ties to the African American community. Despite only having 21 employees as of 2021, the page has just under 25 million followers and over 110,000 posts. Since its inception, TSR has launched a teen-focused page and branched out its focus to include politics and human-interest stories relevant to Black culture. Posts on The Shade Room break news of notable celebrities to their audience, leaving the comment section open for discussions and the “hot-takes” of its followers.

Some of the news it has shared with its audience in recent weeks includes NBA player, Kyrie Irving being barred from practices and games due to refusal to receive the COVID-19 vaccine, and rapper Tyga’s recent release from jail on a $50,000 bond after a felony domestic violence arrest.

TSR and accounts like it get to post stories one after the other, with their owners being the researcher, editor, and distributor. Witty and sometimes outlandish captions drive up engagement but—taking engagement, reach, and relevance into consideration—can consumers regard TSR as legitimate journalism?

In my view, readers should see TSR’s authors as journalists. Personal taste and opinion do not—and should not—determine whether something is or is not journalism. Per the American Press Institute, journalism “is the activity of gathering, assessing, creating, and presenting news and information. It is also the product of these activities.” The Shade Room’s content can be frivolous, like posts about choosing an encouraging song preference, but to ignore the impact of entertainment news on society is careless. The dissemination of information is just that. Attempting to discredit it because of the content can set a precedent of all news becoming hyper-scrutinized because it isn’t “important enough” for consideration.

Also, The Shade Room, with its flaws, must be credited for highlighting celebrity happenings that are often overlooked at large publications because of disinterest in Black media and other minority demographics. The argument against The Shade Room’s legitimacy is the open participation of Instagram’s platform that can affect journalistic integrity. However, the true challenge here regarding The Shade Room is not deciding if it is journalism, it is deciding if the industry will accept it.