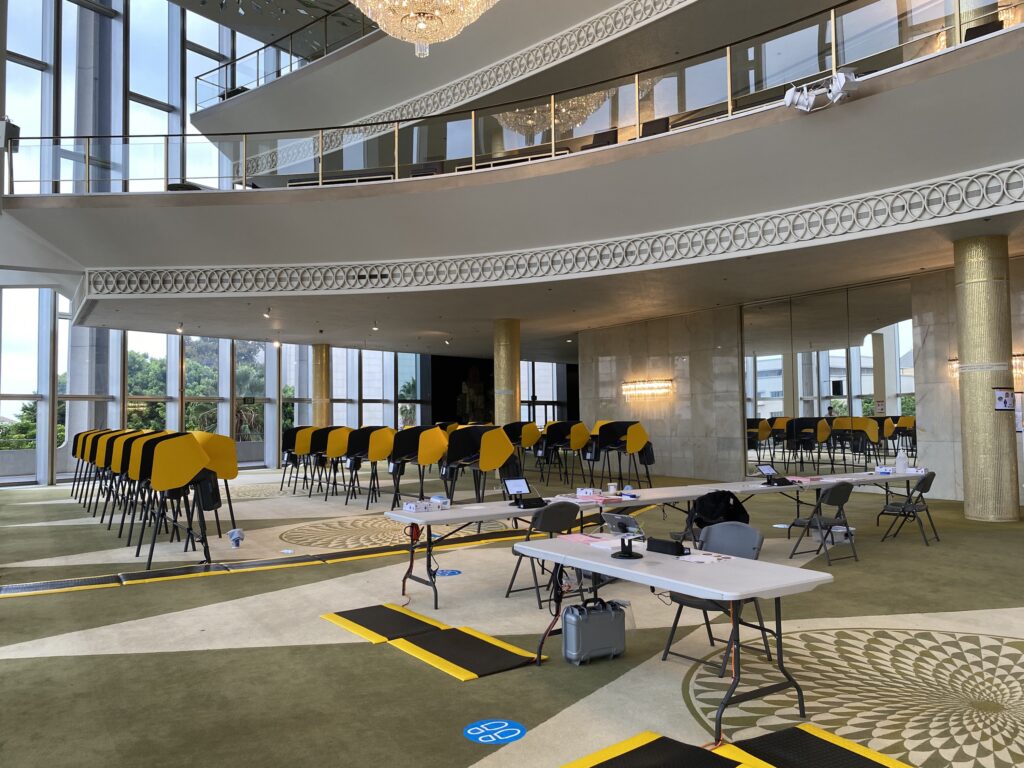 Expecting Long Lines to Vote in L.A. and Finding None

(LOS ANGELES) — On a cloudy Saturday in late October, I filled my backpack with snacks and filming equipment, anticipating a long afternoon of reporting. I was heading over to the Dorothy Chandler Pavilion at the Music Center, a preeminent cultural hub and one of several performing and sports venues throughout Los Angeles that opened up as voting centers. After reading stories about people waiting in line for more than 10 hours in certain U.S. states, I anticipated serpentine queues.

I was shocked. An empty plaza, no lines, scores of available voting booths, and poll workers, along with venue staff, outnumbering the handful of voters. 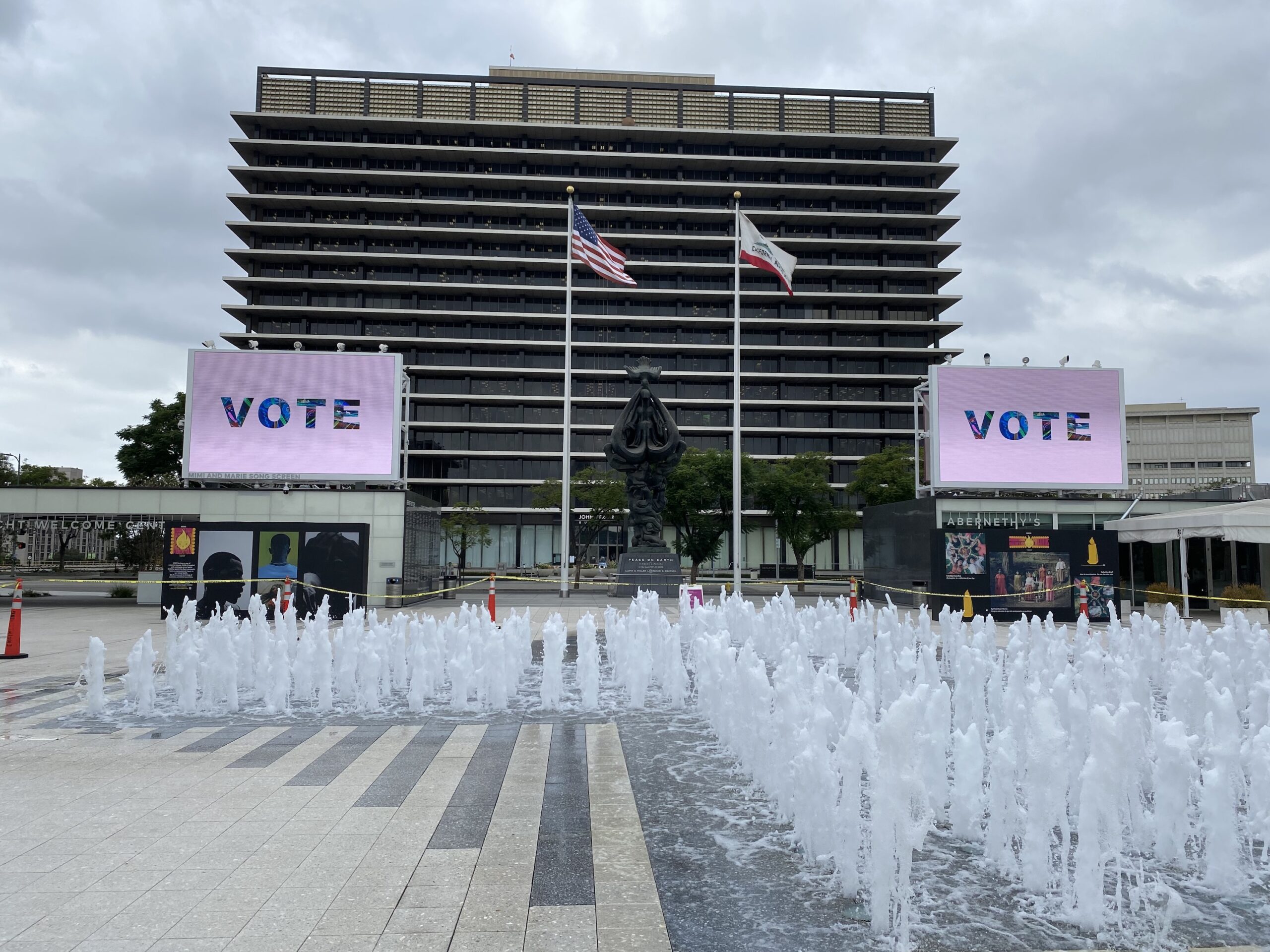 Justin Aguylos, the vote center assistant lead, said that set-up began at 9:00 AM. “This is our first day, so opening was really hectic. A lot of people were scrambling everywhere,” Aguylos said. They had an initial rush upon opening, another one at lunch, and he anticipates the following days to run even more smoothly. Los Angeles also made it easier for voters by allowing people to vote in any district. “So that’s a really big help for the people who work nine-to-five jobs,” said Aguylos.

To speak with voters, I waited 20 minutes in the plaza and watched the plaza fountain water go up and down.

Actor-singers Rachel and Gabrielle Newman used to perform at the Music Center. “It’s crazy that in some states people have to wait [in line] and they’re also discouraged from voting in person. Here at the Music Center it’s easy and quick. You don’t have to wait. Everybody was so friendly and nice. There were a lot of staff and they sanitized everything,” they said. Also known as the Newman twins, they not only finished each other’s sentences but often said the exact same thing simultaneously .“I think that it’s important for us to raise our voices, cast our ballots, vote for change, see change. It’s the time, you know, now to be loud,” the twins said. 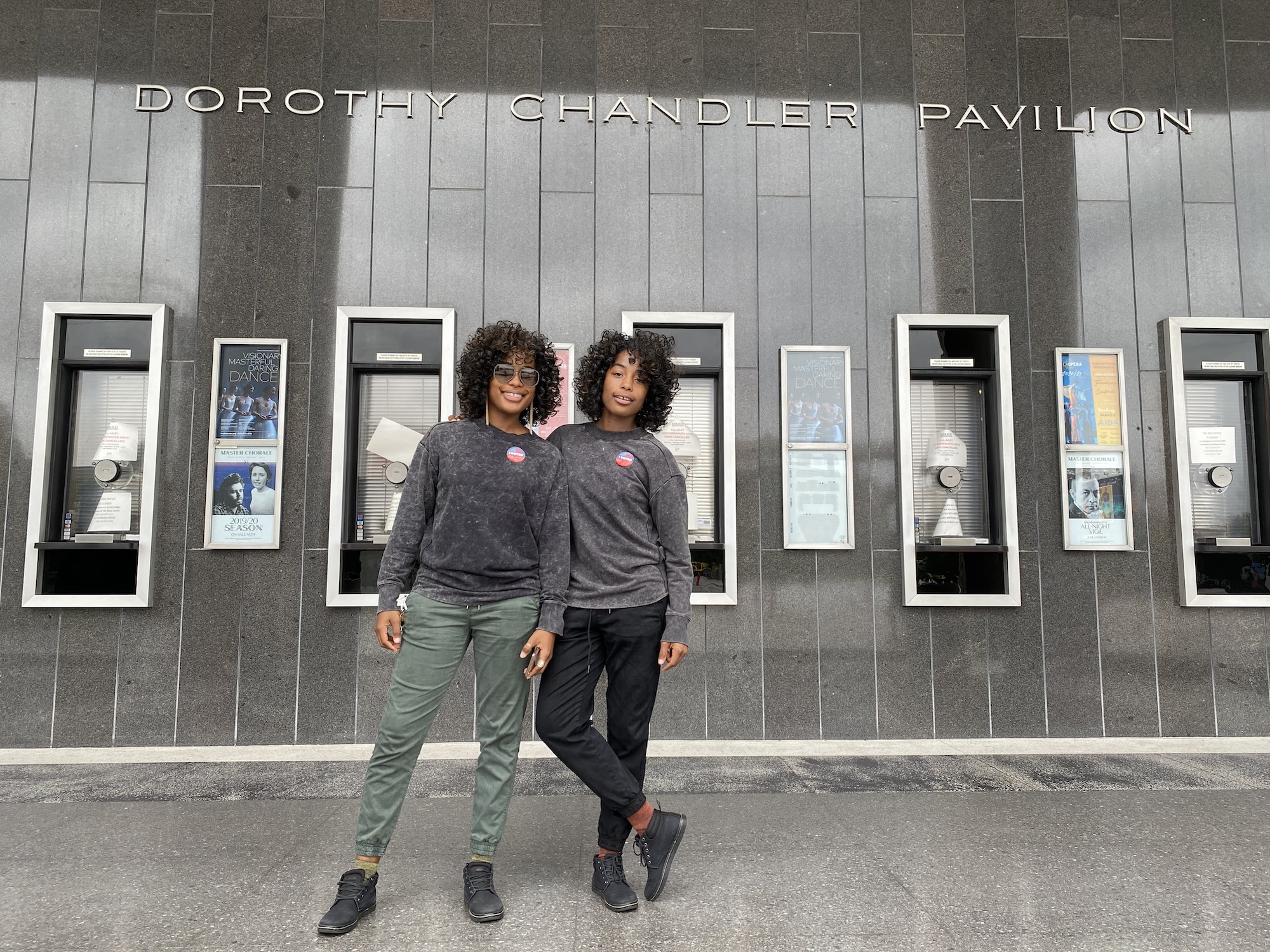 Downtown residents Nicole Ridgely and Alex Reynolds came by to drop off their ballots in person. “We live really close, and it’s the first day that we could drop off the ballot. I was personally a little nervous about the ballot boxes,” said Ridgely, who also expressed concern that mailing in an absentee ballot could get discounted. “So we were just like, let’s drop it off in person where it’s more official,”she said.

“Given our size and location, which is central to public transportation and walking distance from major businesses and downtown residents, The Music Center can accommodate many hundreds of voters in a safe and accessible manner,” said Rachel S. Moore, president and CEO, on The Music Center’s website. “Voting is a fundamental right and a vital opportunity for each individual to impact our government’s leadership and how the country, state and county are run.”

The Dorothy Chandler has never been used as a polling place in its history. “This is the first time that a lot of these places have opened up because of COVID regulations. There’s a big reason to vote in this election. That’s why they’re opening their doors,” he said.