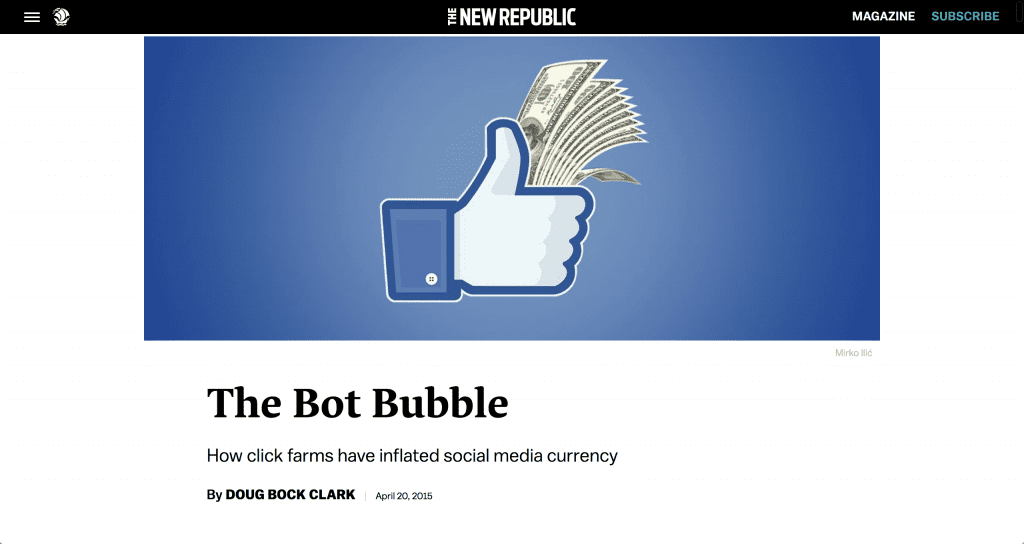 Exposing the ‘Bot Bubble’ One Click at a Time

NEW YORK – The internet was simpler in 2015.  The halcyon days of Vine-demonium were reaching their twilight. Facebook was quietly amassing 1.44 billion active users. Katy Perry was topping the Twitter charts.

Enter Doug Bock Clark. Writing for The New Republic, his article “The Bot Bubble” deepened our understanding of the internet. Through the story of Kim Casipong, a seller of fake social media profiles, he traced the way brands became ‘internet famous’ by buying followers, leading to a discussion that reformed the algorithms that govern social media and created an awareness of what exactly it meant to be ‘liked.’

As a piece of advocacy journalism, “The Bot Bubble” takes an unusual stance. Rather than revel in corporate glitz or the celebrity users that so often define social media interaction, the article pushes readers into experiencing the human cost of a system propped up by fake accounts.

Not only is Kim Casipong’s life rendered in full colorful detail, but so is the life of her hapless pilot-turned-internet-pirate boss. Clark shows us their workdays in a small room juggling SIM cards, their new homes empty with lawns overgrown. He paints a moving picture of citizens doing well in a country that’s doing little for them. It is a convincing glimpse into the livelihoods created by an under-regulated industry.

Clark also goes to great lengths, however, to intersperse his narrative with tracts of data that gird the story of Casipong’s life with objective details. These figures; data showing the average market value of a ‘like,’ the average income of Filipino workers, the revenues for social media companies and their wild growth in value as they gain more users; work to enrich the context of Casipong’s struggle but also convince readers that the story is not just entrancing but true.

If there is one way in which Clark’s article is not a work of advocacy journalism however, it is in the question of who, exactly, it advocates for. The article is far from showing Casipong or her boss as in need of assistance. Instead it likens their journey to “a Philippine version of the American dream.”

Similarly, the article doesn’t appear to advocate for the small businesses which struggle to get more traditional followers made more difficult by fake accounts that obscure their follower counts, according to Clark.

If his article must be said to advocate for anything then, it is for a reconsideration of the social premise that monetizes social media. In Clark’s words, “the idea that [the] digital world is an accurate extension of the physical world.”  It’s in confronting this issue that Clark’s article has had its most profound effect: social media companies cracking down on fake accounts to try and redress the balance, and more people suggesting that perhaps it’s been a false equivalency from the start.