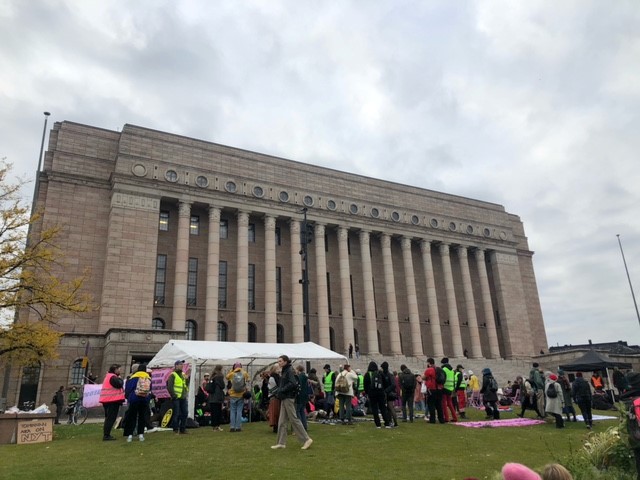 HELSINKI, FINLAND — Members of Extinction Rebellion, a global environmental movement, continued to protest in front of the Parliament House on September 30, after police ordered them to leave the day before.

The group had informed in advance that it would stage a protest for 10 days, or until the Finnish government declared a climate emergency. The protest started at 6 p.m. local time on September 29.

The police had break up the demonstration that Wednesday night, when protesters blocked the main road in front of the Parliament House. This caused major traffic delays throughout the city, according to multiple sources.

According to a statement from the police, out of about 400 protesters, 141 wouldn’t cooperate and continued to block the road when they were ordered to leave.

MTV News reported on Wednesday night that the police carried protesters individually to a bus, which then transported them to a police lockup where they spent the night.

One of them was a medical student, Hanni Häkkinen, who returned to protest after being released from police custody.

“At this moment, Finland is not following the Paris Agreement,” Häkkinen told The Click. “As long as this is the situation, I’m coming back here every day, until the government declares a climate emergency.”

Anne Hyvén was also standing in the middle of the road on Wednesday night. She belongs to a faction of Extinction Rebellion for those who are over 45 years old. Unlike Häkkinen, she left the road after police ordered protesters to leave.

“I went to stand on the sidewalk. I practice civil disobedience just by coming back here today,” she told The Click.

Some members of Extinction Rebellion are paying the fines for protesters who were arrested by the police.

“I have said out loud that I’m willing to pay the fines on behalf of others,” Hyvén said.

Helsinki police announced on Twitter that the protest could continue as long as the main road was not blocked.

“The task of the police is to secure the general order and safety and the freedom of protesters to express their mind,” the police said on Twitter.

Two police officers on the scene confirmed to The Click that Thursday’s protest had gone peacefully. There have been a couple counter protests organized by ultra-nationalist groups like Soldiers of Odin. The police have made sure that the demonstrations stay apart.