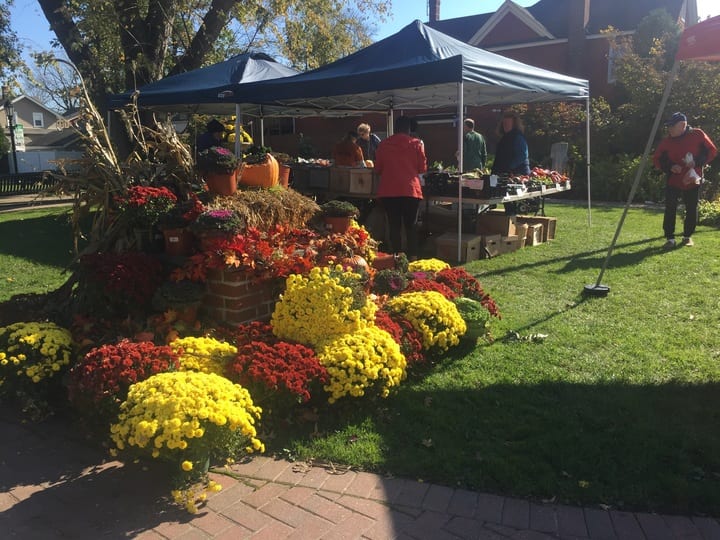 Patrons line up at a farmers’ market vendor in Farmingdale, New York, in fall of 2019. Credit: Nciole Pelletiere

NEW YORK- Residents and visitors of Farmingdale, New York, were unapologetically double parking on Main Street to grab pints of garlic-stuffed olives and “pickle on a stick” from the friendly vendor known as “The Perfect Pickle.”

“We didn’t double park, but if we did it would’ve been worth it,” Katy Farone, a resident of Long Island, New York, told The Click. “We came for pickles and the marinated olives.”

The Perfect Pickle was one of the few vendors at the farmers’ market, which has been held weekly since June . The annual event attracts spurts of crowds who, for nearly a decade, have visited to purchase fresh eggs, flowers, preserves, sauces, veggies, and yes, pickles.

Andrew Johnson was working The Perfect Pickle booth on a Sunday morning as seven patrons patiently waited on line.

“My boss does all his own pickling,” Johnson told The Click. “The garlic sour pickle is the most popular. [We’re] pretty much always busy.”

Garlic sour pickles isn’t the only flavor that has customers puckering up. This pickle vendor sells spicy sour, kosher, brown mustard and other off-beat tastes like Sriracha, horseradish, and wasabi. 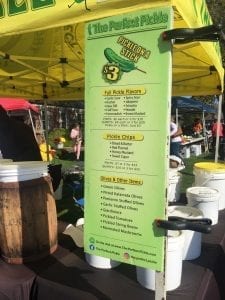 Stuffed olives, pickled string beans and marinated mushroom also appeared to be favorites for those approaching the yellow and green awning.

Johnson said “The Perfect Pickle” will remain at the farmer’s market until November 24 before relocating 35 miles east to Port Jefferson, New York.

“We move around, all year round,” he said. 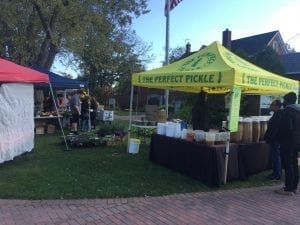 Credit: Nicole Pelletiere The awning of “The Perfect Pickle,” a farmers’ market vendor in Farmingdale, New York, is seen in fall of 2019.

The folks of Schneider’s Farm, which showcased an array of produce—including potatoes, fruit, and fresh herbs—will also move to another Long Island location once this season concludes.

Bella Radacki who works for Schneider’s Farm in Melville, which is roughly five miles from Farmingdale, told The Click it’s been her first season working with her friend’s family farm.

The 19-year-old’s duties include loading and unloading the produce from the truck.

“It is actually fun,” Radacki said of the work. “The challenge is making sure we have enough items to sell and keeping everything good for the harvest.”

Schneider’s has hosted the farmer’s market for several years next to Village Hall in the center of Farmingdale’s up-and-coming village located just 50 minutes from Manhattan via the Long Island Railroad. 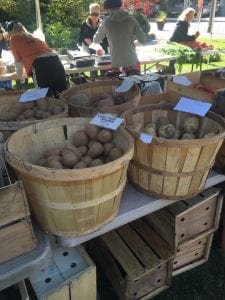 Credit: Nicole Pelletiere A variety of potatoes are seen at a farmers’ market in Farmingdale, New York, is seen in fall of 2019.

Since 2012, the farm has offered produce and sometimes flowers, while other vendors served soups, wine, and shellfish.

This year’s market not only had an appearance by “The Perfect Pickle,” but Schneider’s Farm stand brought November feels with bottles of apple cider and 14 different varieties of apples.

Radacki also said customers were just one week shy of autumn crops like squash and pumpkins.

Radacki added that in the summer, strawberries and blueberries are Schneider’s best sellers—so much so, that regulars forget the fruits aren’t in season for farmers growing on the east coast in fall weather. 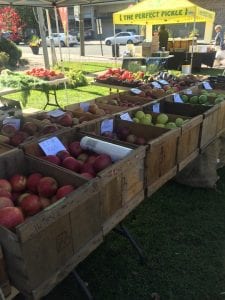 “Many don’t realize the season of certain [produce],” she said. “They’ll ask for strawberries, because they see them at the grocery store, not realizing it is warm all year round where they grow in California.”

While Radacki appreciates camaraderie at Schneider’s, she said it’s also the sense of community at the market which makes her smile.

“There’s a lot of kids running around,” she said, “It’s great for families.”