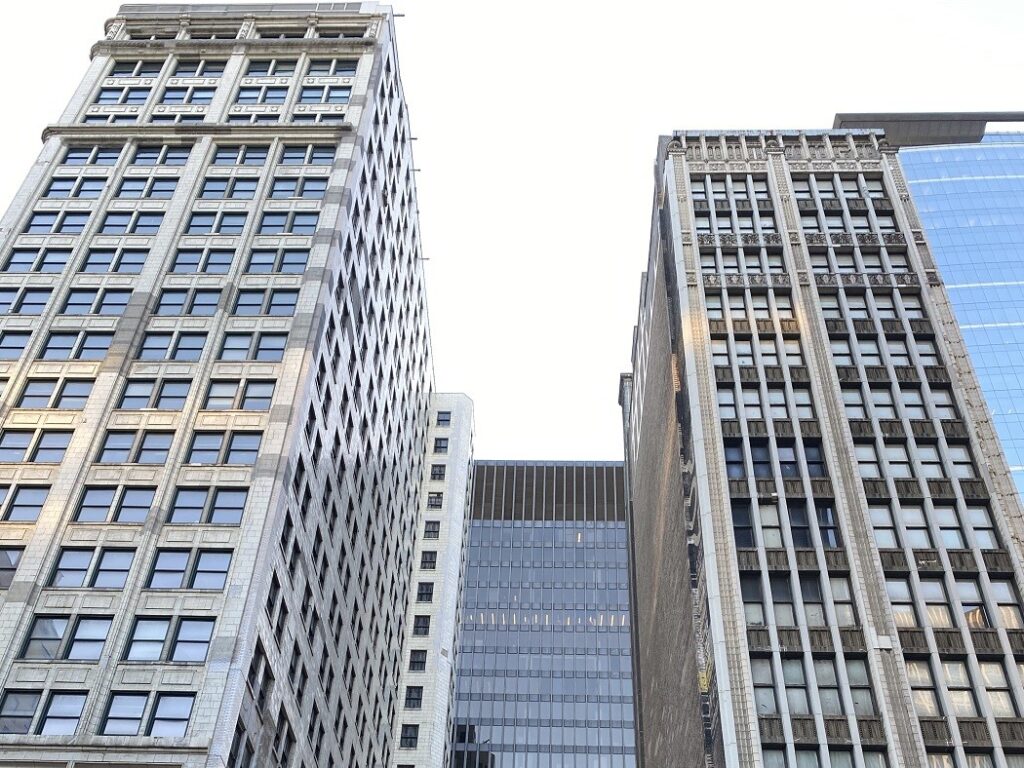 The Dirksen courthouse peeks through the Century (right) and Consumers (left) buildings on State Street in the Loop. [Credit: Sarah Ashley]

Fate of Historic Chicago Buildings Up for Debate

(CHICAGO)—On a blustery Chicago morning in 1915, a lineman emerged onto the roof of a brand new 25-story building to find a flock of birds on the ground. Some were dead. Others were stunned. The skyscraper’s steel frame and white, terracotta façade towered over almost everything else in the city. A motionless yellow warbler caught the lineman’s eye. The poor bird likely collided with the 60-foot sign The Consumers Company recently placed on the rooftop. The lineman swiftly carried the delicate creature to a nearby bird store hoping they could revive it.

Today, the Consumers building and its neighbor, the 16-story Century building, confront similar fates. Once revered feats of engineering, the crumbling high-rises face demolition. Can local preservationists carry them to safety?

In 2004, the FBI thwarted a car bomb plot against the Everett McKinley Dirksen Courthouse, which sit across a small courtyard from the Century and Consumers buildings. Post-9/11, the proximity of the buildings raised significant security concerns at the General Services Administration (GSA), a federal agency that manages commercial properties. The GSA feared direct sightlines from the buildings into judges’ chambers and courtrooms put courthouse employees and visitors at risk. In 2007, the agency bought four buildings it considered threats, including the Century and Consumers, according to the Chicago Tribune.

Initially, the GSA planned to convert both buildings into government offices. In 2014, it became clear no offices were needed; the buildings have been empty ever since. Though part of the GSA’s mission is preservation, the once-extravagant interiors have deteriorated. Portions of facades crumbled onto State Street in 2015, resulting in street closures and additional safety concerns.

This past spring, WGN reported Sen. Dick Durbin ( D-IL) had secured $52 million through President Biden’s Infrastructure Investment and Jobs Act to tear down the Century and Consumers buildings. In a Chicago Sun-Times op-ed defending this decision, Durbin referenced a 2018 “unanimously endorsed… plan to demolish the properties and create the originally-intended security buffer zone,” from the Judicial Council of the Seventh Circuit.

The Consumers building, at 220 S. State Street, was completed in 1913 and designed by Jenney, Mundie & Jensen, a prominent architectural firm responsible for many iconic Chicago buildings. The Chicago Architecture Center says the firm’s engineer William Le Baron Jenney “[rewrote] the rulebook for building tall.” Jenney launched the city into the 20th century after the Chicago Fire of 1871 with the world’s first skyscraper, the 10-story Home Insurance building (1885), which has since been demolished. Two doors down, at 202 S. State Street, is the Century building, completed in 1915. Designed by Jenney’s protegees, William Holabird and Martin Roche, the cream-colored terracotta structure embodies the transitional period between the Chicago School of Architecture and art deco styles of the 1920s.

The Chicago School of Architecture is defined by steel frames, fire-resistant terracotta masonry, and large windows. Ornamentation is subtle. Lines are clean. The Century and Consumers buildings are early examples of the style and revolutionary for their time. Nestled in Chicago’s Loop Retail Historic District, an architecturally significant area on the National Register of Historic Places, the buildings reflect Chicago’s standing as a global leader in architectural innovation.

Will Tippens, a member-at-large on the board of Landmarks Illinois, an organization that helps buildings achieve landmark status, called the security threat to the Dirksen a “red herring.” If true, several nearby buildings, like the Citadel Center, would also be threats. Erected in 2003, the Citadel Center is a 37-story mixed use tower containing offices, retail, and public parking. One tenant is co-working company Convene. Its spaces on the 14th and 15th floors boast “10’ ceiling heights with floor-to-ceiling vision glass.” Based on a virtual tour on Convene’s website, at least five of its workspaces look directly into the Dirksen.

Tippens believes the real issue is the GSA’s lack of action. After the 2004 car bomb threat, concrete blocks went up along the sidewalk around the Dirksen to protect it from vehicles. Yet, security guards on duty last month were not aware of any threat posed by nearby buildings. Via email, a GSA spokesperson said they’ve enhanced security efforts at the Dirksen, but the “GSA does not disclose security measures.”

The same spokesperson said the GSA spends “approximately $750,000 bi-annually” for facade inspections and repairs, plus $70,000 annually for scaffolding to catch debris. These funds don’t go far. Photos from a 2017 inspection by JSO Valuation Group show boarded up elevators, chipping paint, and an abandoned shopping cart sitting in the Consumers building elevator bank.

This year, Preservation Chicago, a nonprofit protecting the city’s architectural accomplishments, and Landmarks Illinois included the Century and Consumers buildings on their Most Endangered Buildings list. Neither has landmark status. Landmark designation doesn’t guarantee protection, it simply states structures are worthy of saving.

The Commission on Chicago Landmarks, the organization that grants official landmark status, declined to vote on the subject at its September meeting because it needed more information about the security threat.

Preservation Chicago created a Change.org petition to raise awareness. It has over 23,000 signatures from supporters nationwide. Words used to describe potential demolition include “thoughtless,” “wasteful,” and “asinine.” W. White, from Muscle Shoals, Alabama, wrote, “From my perspective, as both a historic preservationist and a fiscal conservative, this is a wasteful boondoggle of a project that should be stopped immediately.”

Brian Kaempen, a Chicago resident, explained the significance of terracotta in construction. “It’s a very manual process,” he said. “It’s artisanal. It’s craftsmanship.” He likened the GSA to a slumlord who has let the Century and Consumers buildings sit “without care or regard… Historical buildings like this will never be built again.”

Jacob Rodgers, a contractor for the Chicago Housing Authority, represents many Chicagoans’ desires to keep the city’s downtown vibrant. He worries demolition would mean another vacant lot. “I work across the street from a hole in the ground,” Rodgers said, referring to a lot in the Loop that’s been empty since crews broke ground in 2021, according to Urbanize Chicago.

Block 37, a shopping center just north of the Century and Consumers buildings, is an infamous catastrophe. It sits on the former McCarthy Building site, an official Chicago landmark razed in 1989.  It took 16 years, several developers, multiple rejected proposals, and hundreds of millions of dollars to break ground. Block 37 wasn’t completed until 2016.

Possible solutions for renovation and reuse

On Nov. 10, the GSA held a scoping meeting to hear ideas for the buildings’ future from experts and the public. The agency seemed genuinely open to creative solutions. Thirteen rows of chairs faced a stage. At most, 30 people attended; a majority were government employees or preservationists. Chief Judge Rebecca R. Pallmeyer, a petite woman in a royal blue dress suit, approached the podium. A chair of the Dirksen Building Safety and Security Committee, Pallmeyer said the courthouse symbolizes the “strength and dignity of the judiciary,” adding that Dirksen employees are entitled to safe work environments.

Max Chavez, President of Chicago Special Projects, joined the meeting via Zoom and likened tearing the skyscrapers down to “[ripping] portraits off the wall at the Art Institute of Chicago and throwing them in the trash.”

By meeting’s end, the GSA made clear the future of the historic buildings boils down to one of three options: demolition and repurposed land; renovated and repurposed buildings; or no action at all. There’s no federal funding for preservation, but there are ground rules for any repurposing. First, the federal government must retain ownership of the buildings. The skyscrapers cannot be turned into residential apartments. Tenants will forfeit access to the roof and outdoor spaces. Sightlines into the Dirksen are forbidden. No reserved parking. No fire escapes. The buildings must have 24-hour security with interior and exterior cameras the federal government can monitor. Exterior lighting is required.

Ward Miller, Executive Director of Preservation Chicago and perhaps the Century and Consumers buildings’ fiercest protector, said one proposal meets the GSA’s demands: turning the pair into archival spaces for precious documents. He’s communicated with people like Holly Fielder of the Franciscan Central Archive, who spoke at the scoping meeting via Zoom and said “irreplaceable” collections could live inside these buildings post-renovation. Archive centers have limited staff and require significant security. Plus, many archived items can’t be exposed to sunlight, so Dirksen-facing windows would be bricked over, obstructing views of the courthouse.

Back on a blustery day in 1915, a soft-hearted lineman helped save a tiny warbler from the roof of the Consumers building. More than a century later, who will save the building it crashed into? These architectural triumphs may meet the same fate as the McCarthy building or they may live to see another 100 years. While the GSA is still in its public scoping phase, it’s hard to tell which way the wind will blow.