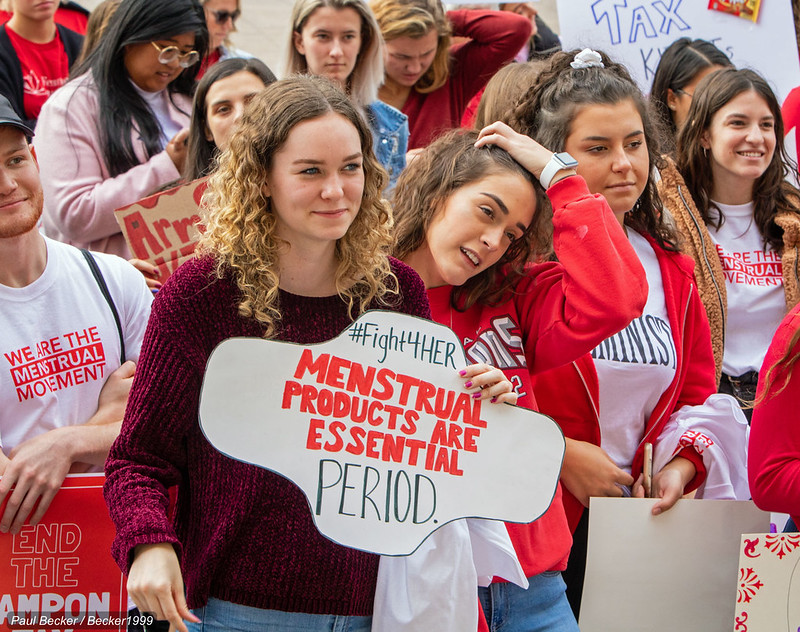 Commentary: In the Fight for Menstrual Equity, the ACLU Refuses to Bow to Objectivity

(LOS ANGELES) — Last year, when the American Civil Liberties Union (ACLU) published an in-depth report headlined, “The Unequal Price of Periods: Menstrual Equity in the United States,” social media users reacted in a barrage of emotional tweets and comments. The report put into qualitative terms what women, trans and non-binary folks have long known: how debilitating the cost of a period can be.

The report claimed that having a period is expensive; that many low-income women, trans individuals, and non-binary individuals cannot afford menstrual products; and that current policies magnify this inequality by blocking public institutions from providing free menstrual products to the communities that need them most. The ACLU vowed to fight for the right of basic hygiene for all. Naturally, this stance prompted some hot takes.

One Facebook user commented on the ACLU’s post, “Whoever rights this shit needs to look in the bathroom mirror and practice first before speaking this bullshit out loud [sic].” Another wondered, “If a tax on menstrual products is discriminatory, then what of toilet paper?” Meanwhile, on Twitter, one user wrote, “Louder for the prison wardens,” and another applauded the authors for defending trans and non-binary rights.

Then, the media caught wind of the report. Fox News wrote a poorly-framed article headlined, “ACLU calls for tampons in men’s rooms in order to achieve ‘menstrual equity.’” Daily Mail, Ms. Magazine, and the alt-right website Breitbart also picked up the news. With coverage on both sides of the aisle, the ACLU’s report had officially made a splash. While explosive in its demands for access to menstrual products for disenfranchised Americans, the report can also be viewed as a work of journalism.

Founded in 1920, the ACLU strives “to defend and preserve the individual rights and liberties guaranteed to all people in this country by the Constitution.” With 1.5 million members, 300 staff attorneys, and reportedly thousands of volunteer attorneys, the organization spearheads thousands of court cases each year to advocate for LGBTQ+ rights, reproductive rights, and prisoners’ rights.

Although the ACLU is technically an advocacy group, the organization has established credibility over the course of a century by winning a handful of landmark Supreme Court cases. In 1954, alongside the NAACP, the ACLU helped secure a victory in Brown v. Board of Education, which ruled that racial segregation in schools violated the 14th Amendment. In 2015, the ACLU won Obergefell v. Hodges, a win that declared the right of all individuals to marry, allowing LGBTQ+ couples across the nation to legally wed. These victories, among many others, have positively impacted millions of Americans and have demonstrated the ACLU’s allegiance to the public—a key tenet of journalistic works.

According to the Pew Center, objectivity is another crucial trait of journalism. But “The Unequal Price of Periods” is subjective: The work offers an opinion that all women — including transgender men, prisoners, and homeless folks — should have equal access to menstrual hygiene. In order to guarantee that “poverty and sexism do not impede people’s ability to participate fully in society,” the ACLU advocates for tax-free menstrual products in stores and free menstrual products in public schools, homeless shelters, and correctional facilities. The work also calls the current state of menstrual equity in America “dangerous,” “problematic,” and “toxic.” But, like many opinion columnists and journalists, the ACLU’s point of view is supported by verifiable facts.

In “The Unequal Price of Periods,” the ACLU notes that federal government assistance programs — the Supplemental Nutrition Assistance Program and the Women, Infants, and Children Program (WIC) — do not allow individuals to purchase or trade food stamps for menstrual products. According to the USDA’s website and WIC page, this is still accurate today.

The report also provides emotionally jarring testimony from Kimberly Haven, a woman who had an emergency hysterectomy after she was diagnosed with toxic shock syndrome in a Maryland prison. The cause? Makeshift tampons. Haven did not have access to menstrual hygiene products and feared the “risk of bleeding through your clothes [when] you don’t have access to laundry facilities.” This account was confirmed in a video of the Maryland Hearing on H.B. 797 before the House Judiciary Committee in 2018.

The report then alleges that correctional officers at the Tutwiler Prison for Women in Alabama forced women to trade sex for tampons. This shocking account was verified in a 2014 memo from the Office of the Assistant Attorney General on the Department of Justice’s website. While the evidence is upsetting, it’s true. This is information that the public needs to know in order to understand how marginalized women are harmed by their lack of access to basic hygiene.

In a clear act of journalism, the ACLU also accurately gathers and contextualizes current laws governing menstrual products. “The Unequal Price of Periods” includes original tables highlighting the 13 states that have approved tax exemptions on menstrual products, not including states that do not have sales taxes. It also outlines the 33 states in which menstrual products are not exempt from sales tax and the singular state that provides free products to homeless shelters: Maryland. This data allows readers to process which states require action or changes to legislation and paints a picture of the states’ apathy towards its menstruating citizens.

While most journalists try not to interfere with the news they report, the ACLU is unabashed in its efforts to propel readers into action and to directly impact legislation. The report urges readers to hold their elected officials accountable, to organize within their communities, and to “shut down conversations about how periods are ‘gross’” — a sentiment echoed by President Trump when he referenced Megyn Kelly’s “blood coming out of her wherever,” according to CNN.

While the ACLU claims its activism transcends “one person, party, or side,” the report intentionally neglects to list opposing arguments. Many lawmakers —mostly Republican— are hesitant to lift the “pink tax” on tampons and pads for fear of losing critical state revenues. When California Gov. Gavin Newsom proposed cutting the sales tax on tampons and diapers, the L.A. Times estimated the move would cost the state $76 million per year.

Earlier this year, Tennessee Sen. Joey Hensley resisted a proposal that would include tampons in a holiday tax break, fearing that women might abuse the sale, according to AP.  But in many states, Viagra, which treats erectile dysfunction, receives tax-exempt status while tampons do not. From the ACLU’s perspective, menstrual equity is a basic human right and gender discrimination in legislation is real — anything stating otherwise refutes the ACLU’s mission and undermines women’s rights, which the ACLU has vowed to protect.

But the ACLU’s reporting, with its glaring bias, blatant agenda, and calls for public intervention, doesn’t push against the ethical boundaries of journalism. On the contrary, it’s necessary. The report brings to light horrific and verifiable information surrounding a highly stigmatized topic that “hits hardest the populations for whom access and agency is most compromised.”

For many women, trans, and non-binary people, menstruation is not something they can control. Periods can be a source of severe shame, especially when they can occur unexpectely; according to a 2018 study commissioned by Thinx, 42% percent of women have experienced period-shaming. The ACLU’s “The Unequal Price of Periods” is dedicated to improving the lives of millions of menstruating individuals nationwide.

This act of journalism—both in spite of and because of its activist roots—demonstrates an allegiance to the public by advocating for the voiceless: the teenagers, inmates, homeless, and transgender women who aren’t represented in the rooms where bills that dictate their quality of life are authored.

When it comes to protecting human rights, there is only one side. So long as the ACLU continues to provide facts that fall within the public realm of interest, the organization is justified in participating in journalism… bias and advocacy included.