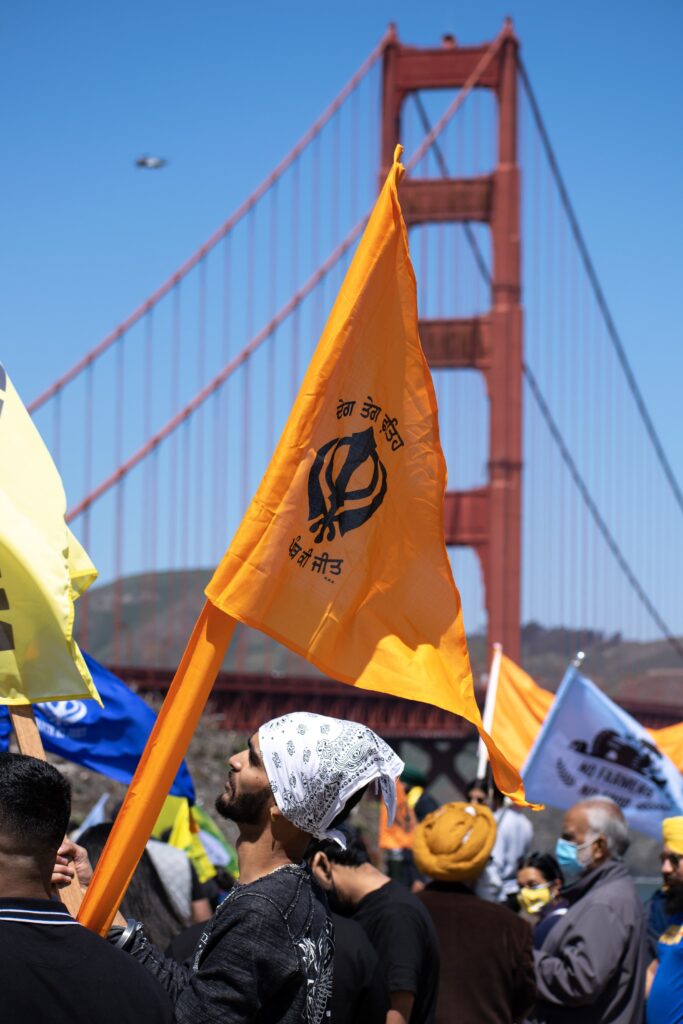 A protester holds a flag bearing the Khanda and a Sikh proverb at the San Francisco March on the Golden Gate Bridge, April 10, 2021. [Credit: Harspreet Kaur]

Fighting for India’s Farmers in the Golden State

Last November farmers in India began protesting new laws that would pose a direct challenge not only to their livelihood but to their legacy. The laws, known among activists as the “black bills” or the “black laws,” stand to weaken regulations and standards that have been in place for years impacting the agricultural industry and income security, allowing room for large corporations to potentially exploit farmers.

In the face of violence and a global pandemic, farmers are fighting much more than just the new laws. They are fighting for their identity.

Approximately 58% of India’s 1.3 billion people rely on agriculture as their primary source of income. A large portion of protestors in India’s capital Delhi is coming from the northern regions of India, specifically Punjab and Haryana. Farming is a process—much more than just planting a seed and waiting for the harvest. India’s farmers are responsible for incurring the cost of growth and production for all of their crops. Everything— from fertilizers to pesticides to seedlings—is an out-of-pocket expense.

Laws similar to the black bills have been enacted in the past in the state of Bihar, where pre-existing regulations crumbled due to the lack of investment and infrastructure. “The farmers want some kind of security,” explains New York University Professor David Ludden, author of An Agrarian History of South Asia,    “[T]hey make their investments and they work hard every year, every day. They work with the idea that if they do their job, they work hard, and they do what they’re supposed to do, they’ll be able to raise their families and send their kids to college and all that kind of stuff.”

From the Red Fort to the Golden Gate

India’s protests have been characterized by the roar of tractors and a landscape of colorful turbans. In California, the scene is similar but definitely not the same. The tractors are accompanied by various models and hues of cars. Colorful turbans are paired with bright orange and yellow flags flying high overhead. 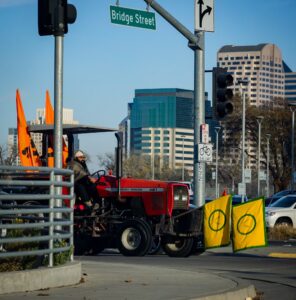 Harspreet Kaur is a 22-year-old photographer who picked up her camera to capture the vibrancy and resilience of her community.  “It was actually because of these rallies and these protests when I finally started realizing, I like photography like this is something that I enjoy,” she says.

Kaur spent the early years of her life watching her father capture her through his lens. He inspired her to use her talent to capture moments that matter to her, but she had somewhat abandoned her passion after the loss of her uncle in March of 2019. “It just took some motivation to finally capture something that I felt was worth posting about,” she says.

Like Kaur, many other Indian Americans have felt the call to get on the ground and get involved as protesters continue to experience internet blackouts and journalists are being arrested on-site in India. The issue doesn’t stop there. Some even feel that the voices of protesters and activists around the world are being suppressed via social media restrictions.

“As a person sitting in California, it’s been a little bit more difficult finding pictures and finding coverage of the protests,” Kaur explained. “ When I used to log on to Twitter, every single post was videos, pictures, and interviews of people at the protest. But, now it’s kind of like I have to go looking for it. There have been times where if I post a tweet and I hashtag “farmers’ protest,” people in India cannot see the tweet, and Twitter will let you know that there are people from these countries who are not allowed to view your tweet. A few of my pictures have actually gotten taken down and been reported.”

Amar Singh is an activist who isn’t taking social media silencing lightly. He recently organized and led a protest at Twitter’s headquarters in San Francisco accusing the company of censorship.

“Our gurus have taught us to stand up against tyranny and always treat everyone as equals,” Singh said in an interview via email. “I have come to the understanding that I am able to help and make a difference here. Whether I am raising awareness, creating protests, or educating/empowering our youth to be leaders.”

Singh began his involvement with the farmers’ protest by creating social media awareness around both the conflict and the movement. In January, he organized his first event in support of India’s farmers. Since then he’s organized at least five more events, including a march on San Francisco’s famous Golden Gate Bridge.

“Time after time, our ancestors have laid down their lives for us and others to live our lives today. I know it is my turn to speak up and make a difference,” he says. “This farmers protest is history in the making. Minority groups are struggling to be heard as the government is not only selling our lands, they are also selling everyone’s culture and history. Back home agriculture was the bread and butter of our homeland.” 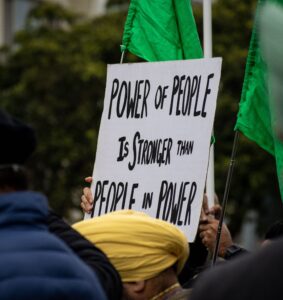 Punjab is one of the most productive agricultural regions in India, and it is often referred to as the breadbasket of the country. Farming has played a central role in shaping Punjabi culture and society.

More than half of the population of Punjab identifies religiously as Sikh, and according to Ludden, this shapes farming in the community. “The Sikh religion is one that actually valorizes manual labor, particularly farming. In other words, there’s something sacred about farming labor in Sikhism,” he explained.

Daljit Kaur grew up listening to her family’s tales of their lives back home. Her heritage is part of what fuels her fight against the new reforms being implemented in her family’s homeland.

“Being Punjabi and the first generation out here in America we lived in two worlds,” she says. “Born and raised in San Jose, California, my family taught me and my siblings what they did back home and that was farming. Tractors, cows, homemade food, hard work, respecting your land, culture, and religion.”

Home away from home 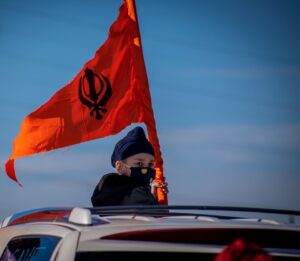 Since the onset of the farmers’ protests in India, a lot has changed, but the laws remain in place.  At the 100-day mark, the death count among protesters was over 240 and counting.  Tensions, violence, and the urgency of the country’s COVID-19 status have all risen, leaving Indians all around the world in a position where they have to hope and help from afar.

“Being so far is one of the hardest things,” says Singh. “I am a positive, happy person, but I’ve had times where I have cried due to the events going on.”

Delhi farmers have held strong, stating that they will not stop protesting until the new farming bills are repealed. They have organized and elected to defy curfew and lockdown restrictions in order to demonstrate their determination. The scene back home is what keeps activist Daljit Kaur going.

“Watching what’s happening in India is very disheartening but also leads to overwhelming pride,” she says. “Punjab is our mother, the government is attacking our mother, and everyone roaring and making noise are the children of that very mother. We will not stop fighting for our basic human rights to our land and farming.”