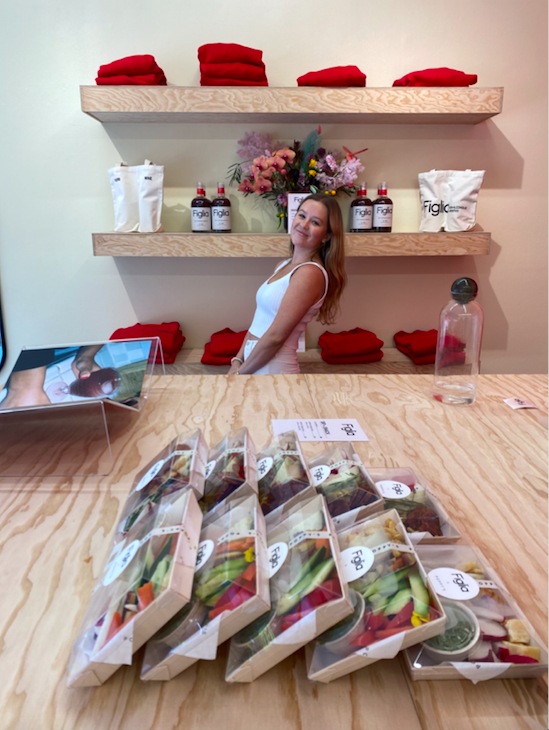 Walker poses at the grand opening of the pop-up shop for Figlia in New York City [Credit: Riley Walker]

Figlia Brings No Alcohol and No Pressure to its Latest Beverage

A New York City based non-alcoholic aperitivo has made a strong impression on the alcohol industry with all natural ingredients, no added sugars, and no preservatives.

Figlia launched its first flavor Fiore on April 28 of 2021, with notes of bitter orange, clove, and rose. Since then, Figlia has been featured in The New York Times, CBS News, Travel and Leisure, and Print Magazine.

Riley Walker, the Director of Operations and Wholesale at Figlia, shared her experiences working alongside the brand.

Why was Figlia founded?

Figlia was inspired by our founder, Lily Geiger. The name itself means daughter in Italian. She wanted to make a non-alcoholic beverage in honor of her dad, but also one that met her personal needs. Lily’s dad suffered from alcoholism and passed away when she was twenty-years-old. After she watched him battle the disease, she wanted to help others struggling. She also found that she was drinking too much for her liking during quarantine, and it made her feel not at her best. She wanted a non-alcoholic drink that served as an afternoon pick me up, so Figlia was born!

Why do you think there is a trend towards non-alcoholic beverages?

I think that the coronavirus pandemic and quarantine really changed people’s drinking habits. A lot of people started drinking a lot more than usual and as quarantine progressed, they realized “oh, this is unhealthy”. That was definitely the catalyst for the industry. In general, I think people are wanting to be healthier and to not have to care as much about the stigma associated with alcohol.

Are there competitors in the industry?

There’s a ton. The industry is booming. All of them are not aperitivos though. Some refer to themselves as non-alcoholic spirits, wine, liquor, or tequila. I think the industry first began to boom because it was marketed towards people who have allergies and cannot consume alcohol, but wanted the benefit of the taste. Now I believe breaking down the stigma is the reason why so many people are buying drinks like ours.

Are people hesitant towards non-alcoholic beverages or have they responded well?

With the space that we’re in, people that don’t understand it are more hesitant. However, people who are sober-curious love it. I think that once we get people to try our product, they begin to realize that Figlia can be served alone or as a healthier option for an alcoholic mixer.

Is the flavor profile different for Figlia? If so, how?

Clove is the number one flavor distinction for me! No one else has clove, it’s much more aromatic. I don’t love how other non-alcoholic beverages taste bitter and try too hard to mimic the taste of alcohol. Figlia still tastes sophisticated and is much less intense. When I drink Figlia, I like to pair it with seltzer water, rosemary, and an orange slice on top. I feel like all the pressure towards alcohol has been taken off, and I can really just enjoy an elegant tasting drink.