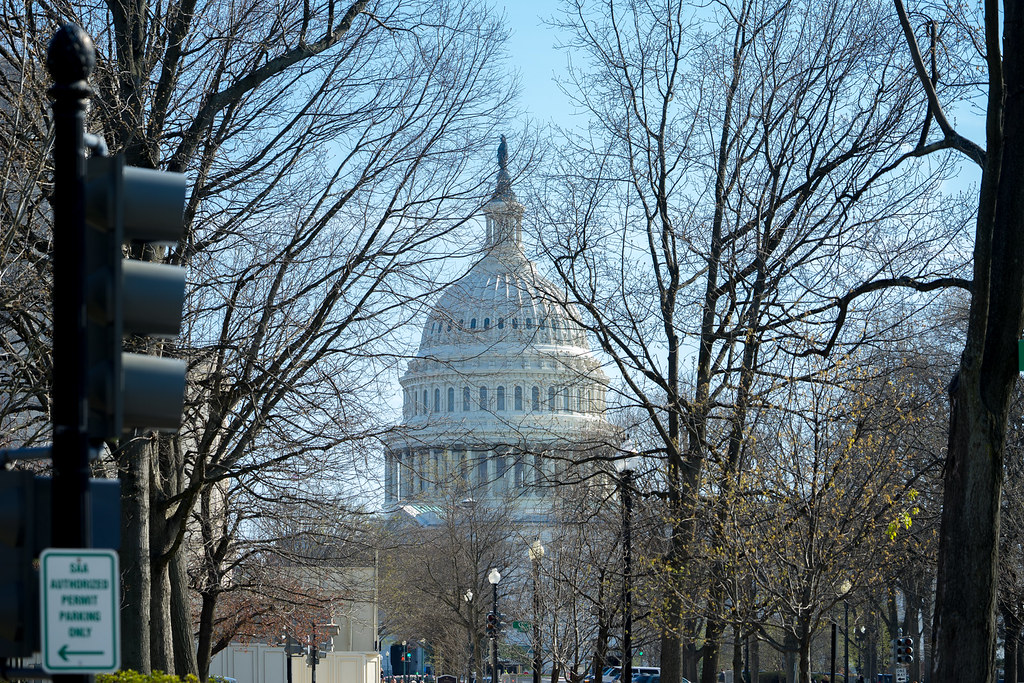 “US Capitol from Lower Senate Park” by John Brighenti is licensed with CC BY 2.0. To view a copy of this license, visit https://creativecommons.org/licenses/by/2.0/

Republican congresswoman Marjorie Taylor Greene has courted controversy since the beginning of her political career. Her past is littered with incendiary remarks, including endorsements of conspiracy theories and hate speech. Greene has aligned herself with QAnon, the loosely organized movement based around the unfounded idea that pedophilic “deep state” bureaucrats and the Hollywood elite worked to undermine the presidency of Donald Trump.

Labeled as the “QAnon-candidate” or “QAnon Congresswoman,” Greene has implied a deep state cabal of pedophiles governs the country and once suggested that the wildfires in California were a product of a Jewish-controlled space laser. But despite her fringe rhetoric, her long list of donors points to broad and enthusiastic support among the Republican Party establishment.

Prior to Greene’s election, FBI Director Christopher Wray said QAnon had been deemed a domestic terror threat in September 2020. After the January 6 insurrection at the Capitol Building, which prominently featured QAnon imagery and QAnon disciples, Democrats in Congress were quick to point out the danger of Greene’s presence as a conspiracy propagator in the federal government. In February, a vote in the House of Representatives led to Greene’s removal from her committee positions, sidelining her from a legislative standpoint.

However, Greene has been touted by former President Trump as a “future Republican star,” and despite her lack of seniority or legislative intuition, she still holds a seat in the federal government and access to the pulpit that comes with it. As Greene evolves into an increasingly cataclysmal figure, it is important to analyze who is responsible for financially backing her first campaign for Congress.

Filings with the Federal Election Commission reveal Greene contributed $950,000 of her own money to her campaign. Greene and her husband accumulated their wealth through ownership of the construction company Taylor Commercial, Inc., which Greene took control of when her father, Kent Taylor, sold the business to his daughter and son-in-law in 2002. Taylor Commercial is centralized in Alpharetta, Georgia, but their website shows their work is predominantly done in the Atlanta area.

“Your business took as much as $350,000 in [Payment Protection Plan] loans from the federal government, at the same time you were putting $900,000 into your campaign,” Cowan said. “So, if you don’t need the money and you have the discretionary funds, will you commit to returning that money to the citizens of northwest Georgia?”

Greene responded to Cowan and justified her PPP loan by stating that Taylor Commercial had to suspend work due to COVID-19, and argued that Cowan was “out of touch” with business owners. Data provided by the U.S. Small Business Administration confirms that Taylor Commercial received between $150,000 and $350,000 in PPP loans. In Atlanta, construction was deemed essential business per city planner Tim Keane, and continued throughout the pandemic.

Despite Greene’s association with QAnon and her propagation of its beliefs—which, crucially, is centered on the baseless idea that a cabal of Satan-worshiping pedophiles secretly runs the U.S. government—the congresswoman accepted money and support from two colleagues embroiled in sex crimes investigations.

Greene’s campaign received financial support from sitting congressmen through political action committees in the names of Rep. Jim Jordan of Ohio’s 4th District and Rep. Matt Gaetz of Florida’s 1st District, with donations of $4,000 and $2,000, respectively. Jordan and Gaetz have since become two of Greene’s closest allies in Congress and both voted against removing Greene from her committee positions in February.

Since 2018, Jordan has been a prominent figure in a sexual misconduct probe focusing on abuse of student athletes at Ohio State University in the 1980s and ’90s, when Jordan was a wrestling coach at the college. More recently, Gaetz has become one of the central players in a distressing sex trafficking investigation involving a minor, for which Greene has publicly defended Gaetz.

Other notable contributors include Lin Wood, conservative attorney and proponent of the disproven notion the election was “stolen” from Donald Trump via mass fraud. Like Wood, Greene propagated the election fraud theory, dubbed “The Big Lie” by some in the media. Currently, Wood himself is being investigated for possibly committing voter fraud in the state of Georgia. Wood made a total of $5,600 in contributions to Greene based on FEC filings.

Greene also received funding from the GOP’s usual suspects, including over $100,000 from WinRed, a PAC that spent over $2 billion dollars on Republicans in the 2020 cycle. Tatnall Hillman, step brother of billionaire Henry Hillman and consistent Republican donor, made four contributions, totaling $10,900. But Hillman was not the only billionaire who had invested in Greene.

KochPAC, the eponymous PAC operated by billionaire Charles Koch, made a $5,000 donation to Greene on June 8, 2020, the day before Greene won 41% of the vote in the primary. KochPAC Director of Communications David Dzioak told Ian Karbal of OpenSecrets that KochPAC later requested a refund of their contribution after learning more about Greene’s “harmful and divisive rhetoric.” Greene’s contentious persona may have created a schism with high profile donors like KochPAC, but fueled small donations, bringing in over $300,000 in the two days her ousting from committees received the most news coverage.

As for spending, Greene’s campaign made 188 disbursements to Facebook, totaling $207,405 for digital advertising. Greene also made two payments to Facebook for campaign finance reporting software. Prior to entering politics, Greene used Facebook as a soapbox to pontificate about disproven absurdities, including the falsification of 9/11 and staged school shootings.

In September 2020, Greene made a post to her Facebook account featuring her holding an AR-15 posing next to progressive congresswomen Alexandria Ocasio-Cortez, Ilhan Omar, and Rashida Tlalib. The caption of the photo read, “We need strong conservative Christians to go on the offense against these socialists who want to rip our country apart.” Facebook ultimately removed the post. Recent reporting by USA Today notes that activists have written to Facebook CEO Mark Zuckerberg, stating Greene abuses the platform to spread false information and requesting her page be permanently disabled. Twitter has previously issued temporary suspensions to Greene’s account, but Facebook has yet to act.

Greene steamrolled through her opponents on her way to Congress, defeating Cowan in the runoff by 15%. The runoff for the nomination largely was the race for the congressional seat itself, as Trump carried Georgia’s 14th District by 27 points in 2016. Greene’s Democratic opposition, Kevin Van Ausdal, dropped out of the race prior to Election Day. Van Ausdal cited the stress of running against an abrasive, gun-toting extremist and personal familial problems as reasons for dropping out in a profile by the Washington Post.

Although she represents a small district in northwest Georgia, as one of just 435 people in the lower chamber of Congress with a vote, she has the capacity to affect the lives of millions of Americans. She gives oxygen to disinformation from a federal office, misleading countless Americans. But her seamless acceptance into the Republican Party, with support from legislators and voters, risks lending a mainstream voice to a fringe ideology and a dangerous cult.

A heated primary season is expected to take place in Georgia’s 14th district in the 2022 cycle, but Greene’s political support from former President Trump and her own personal wealth may make her difficult to oust.