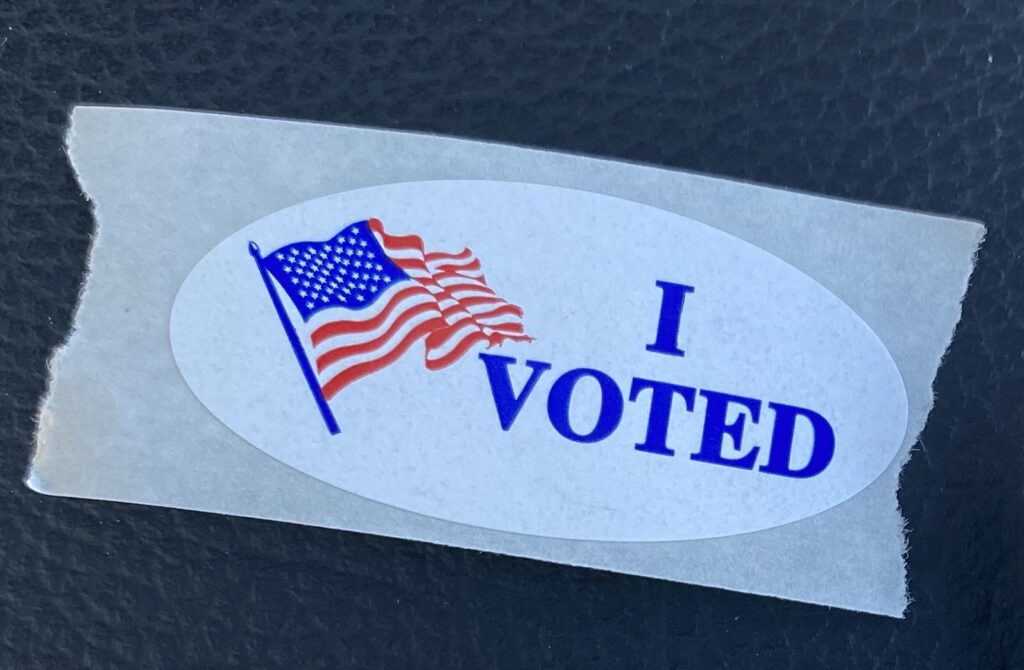 An “I Voted” sticker given out to voters in Suffield, Connecticut. [Credit: Kaylee Pugliese]

A Voting-Tech Company Has Sued Fox News for $1.6 Billion

(LONDON, UK) – Dominion Voting Systems has sued Fox News for approximately $1.6 billion as compensation for what it says were defamatory lies spread by the media giant after the 2020 US presidential elections, according to court records.

Dominion is a voting technology company that supplied voting machines in over 28 US states during the 2020 election cycle.

In the latest lawsuit filed on March 26, Dominion has alleged that Fox News intentionally published false and defamatory statements against it. Dominion has claimed in its complaint that Fox cast the company “as the villain” to salvage its dropping viewership numbers and to “lure viewers back, including President Trump himself.” The company also claimed that for Fox News, “lying about Dominion was good for business and telling the truth risked its future.”

Dominion alleged that Fox News’ smear campaign could be summarized in four ways: that Dominion committed election fraud by rigging the election; that its software and algorithms manipulated the vote counts; that it is owned by a company founded in Venezuela; and that it bribed government officials to use its voting machines.

“If this case does not rise to the level of defamation by a broadcaster, then nothing does,” Dominion said in its complaint.

It went on to say that its business has suffered enormous and irreparable economic harm due to the defamatory lies spread by Fox News. Additionally, Dominion has alleged that Fox News’ campaign against it resulted in employees being repeatedly harassed, with some even receiving death threats.

“Fox took a small flame and turned it into a forest fire,” the court filings said. “As the dominant media company among those viewers dissatisfied with the election results, Fox gave these fictions a prominence they otherwise would never have achieved.”

According to a Vox report, Dominion needs to prove that Fox made these claims “with the knowledge that it was false or with reckless disregard of whether it was false or not” in order to meet the minimum defamation standard set out in the New York Times v. Sullivan case.

One of the defamatory instances mentioned by Dominion in the court records is the November 8 interview of Sidney Powell , a pro-Trump attorney, by Fox host Maria Bartiromo.

“Sidney, we talked about the Dominion software. I know that there were voting irregularities,” Bartiromo claimed in the interview. Powell replied that Dominion’s software was “flipping votes in the computer system, or adding votes that did not exist.”

“Fox engaged in this knowing and reckless propagation of these enormous falsehoods in order to profit off these lies,” Dominion said in its complaint.

Another instance quoted in Dominion’s complaint is the November 18 broadcast of “Lou Dobbs Tonight,” in which President Trump’s personal lawyer Rudy Giuliani claimed that “we shouldn’t be using this company that was founded by Chávez to call votes in America, because their specialty in Venezuela is cheating.”

Fox’s many lies about Dominion were specific and verifiably false, and therefore not ‘opinion,’” Dominion said in its complaint while citing various other instances where Fox News presenters and guests targeted the company.

It’s been more than three months since Congress certified Joe Biden as the winner of the 2020 US presidential elections. But the series of lawsuits triggered by the election doesn’t seem to be stopping any time soon.

Earlier in the year, Dominion filed elections-related defamation lawsuits against Giuliani, Powell, and Mike Lindell, who is the chief executive of MyPillow. It is seeking $1.3 billion in damages from each of these lawsuits. It has also recently indicated that it may sue other media outlets.

In February, Smartmatic, another voting-tech company, sued Fox News for $2.7 billion. “The disinformation campaign that was launched against us is an obliterating one. For us, this is existential, and we have to take action,” Antonio Mugica, the chief executive of Smartmatic, told CNN Business.

These lawsuits could have a major impact on laws related to freedom of the press, libel, and disinformation. RonNell Andersen Jones, a law professor at the University of Utah, told the Washington Post that “we are seeing the way that libel has become a real battleground in the fight against disinformation.”

Syracuse University law professor Roy Gutterman also told the Washington Post that these lawsuits may prompt  broadcasters “to be more cautious or ask tougher questions of its sources, or even make disclaimers on air.”

Fox News has not filed an answer or nominated their own counsel as of March 31. “Fox News Media is proud of our 2020 election coverage, which stands in the highest tradition of American journalism, and will vigorously defend against this baseless lawsuit in court,” the company said in a press release.