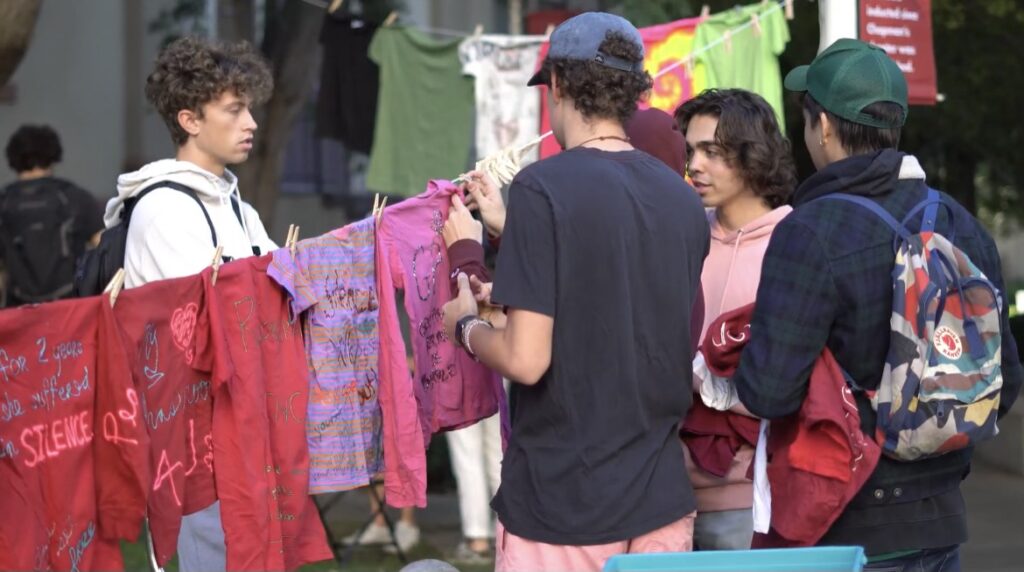 Turning Boys Into Men: Fraternity Stands Up to Interpersonal Violence

(ORANGE, Calif.) — Instead of sleeping in on an ordinary October morning, 40 male members of Chapman University’s Greek community gathered at 8:00 a.m. to hang 800 brightly colored t-shirts bearing messages like “College Parties are NOT Consent!” and “I wasn’t asking for it!” on clotheslines throughout campus. The display was for the university’s semiannual “Clothesline Project,” which raises awareness about interpersonal violence that disproportionately affects women.

The colorful shirts, adorned with narratives and art created by survivors and collected by the project, were color-coded by the type of violence they represent. Pink, red, and orange for rape and sexual assault dominated the lines, with yellow for intimate partner violence dotted throughout. 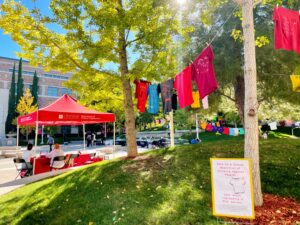 The semiannual Clothesline Project at Chapman University was held Wed., Oct. 27, 2021 and was hosted by the school’s C.A.R.E.S. students in efforts to create a rape-free environment and safer campus community. [Credit: Jill Nielsen]

“Fraternities have reputations,” he said. “I want ours to be good. I want our guys to be aware of this and more perceptive to the problem.” 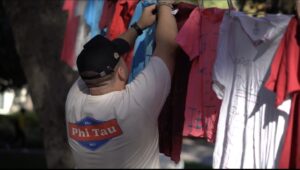 The problem is the prevalence of interpersonal violence on college campuses. According to RAINN, the nation’s largest anti-sexual violence organization, 26.4% of female and 6.8% of male undergraduate students will experience rape or sexual assault. According to research by rape prevention expert John Foubert, men in fraternities were three times more likely to commit rape than other students.

The male participation in Chapman’s Clothesline Project sets it apart from others, said Dawn Foor, a rape survivor who has participated in Clothesline Projects around the state while she served on California’s Rape Prevention Advisory Board. Foor credited Chapman professor Dani Smith, who also serves as the school’s rape crisis counselor, with enlisting men.

“It’s so smart to involve them, rather than to just demonize them,” Foor said. “I don’t see [college men] as monsters, and enlisting them helps create an environment of solidarity where we work together to create a safer campus community.”

Smith oversees Chapman’s C.A.R.E.S group, the student organization that hosts the Clothesline Project, in its effort to “Create a Rape-free Environment for Students.” She brought the Clothesline Project to Chapman in 1995 shortly after its first appearance in Cape Cod, Mass., when a coalition of women’s groups sought a visually impactful way to raise awareness about crimes against women. 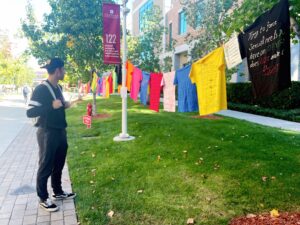 Chapman University student Jack Rogin stops on his way to class to read some of the accounts written on T-Shirts at the school’s semi-annual Clothesline Project, Wed., Oct. 27. [Credit: Jill Nielsen]

The striking display also included blank shirts and paint available for anyone wanting to add their story to the clotheslines. The experience, though empowering and cathartic, can also be emotional and even triggering. Representatives from Waymakers’ Victim Assistance Programs were also on hand to offer support and services for anyone in need.

Twenty-one new shirts were added to the collection during Wednesday’s event.

“So often, these are crimes of silence,” Smith explained, “but the Clothesline Project gives survivors a voice. It’s no longer a statistic, but a human.” 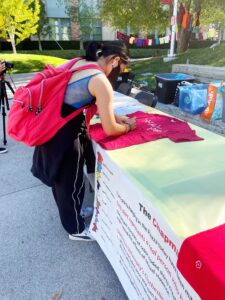 A student stops to make a shirt that will be added to Chapman’s Clothesline Project Display. [Credit: Jill Nielsen]