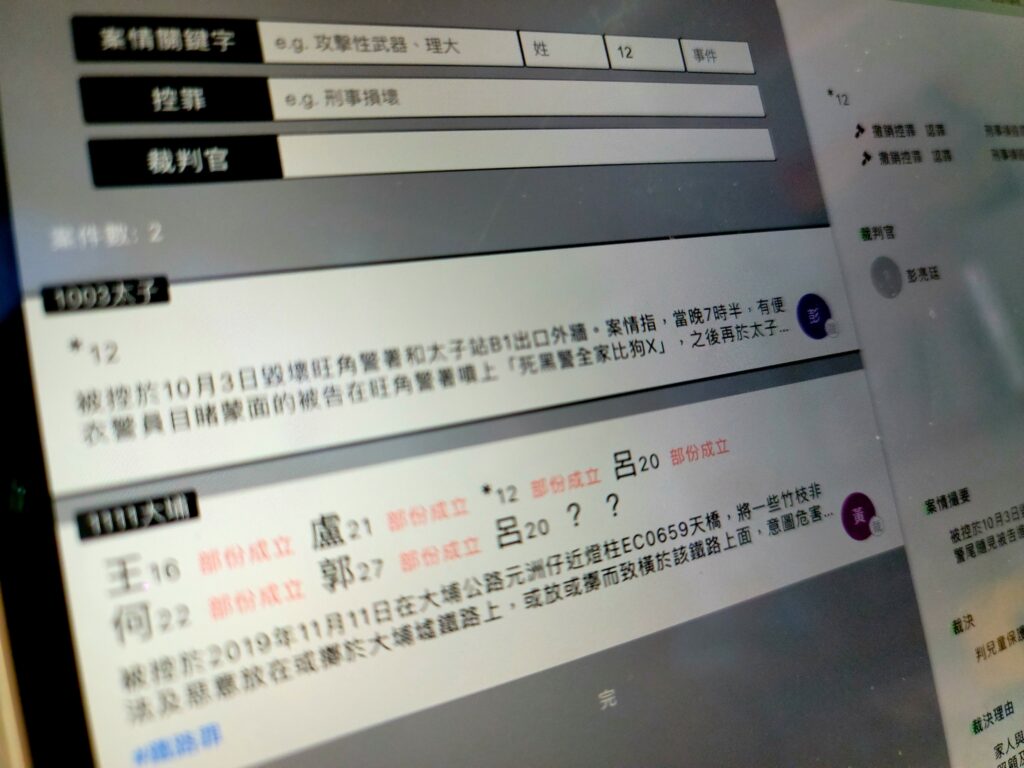 A Hong Kong Free Press (HKFP) article by Kelly Ho reported about the HK Compendium Project. It is an open source database that was created by a group of lawyers. The lawyers consolidated protest-related trial summaries that were posted by court attendees on a Telegram channel, including names, dates, name of judge, verdict and sentence. The gap, as explained by one of the creators of the database, under the pseudonym Ada, was that, “Written records of lower court hearings are rarely made public by the authorities.”

Without these records, it is hard for lawyers to prepare for cases. A junior barrister under the pseudonym Terence used the Compendium Project to reference precedences. He told Ho that even the judges used the database to understand how their colleagues sentenced. The judiciary spokesperson defended the lack of published trial summaries, claiming that they only upload summaries that have legal value as a case reference. This left readers to wonder whether there was an alternative motive to making information about some cases unavailable. In reporting about the database, Ho maintained the journalistic value of being unbiased and presented different perspectives of the story. Ho also adhered to HKPF’s code of ethics for anonymity, explaining to readers that pseudonyms were used “for fear of reprisal”.

Clearly, HKFP advocates for a clear point of view.  In the debate between “pro-Beijing” and “pro-democracy”, HKFP has a clearly stated perspective and bias. Furthermore, just the fact that HKFP reported independently on topics such as the Compendium Project, inherently represents a position of advocacy – a pro-Beijing publication would never publish this story, and if it did, it would likely do it through a critical lens.

So is HKFP engaging in advocacy journalism?

In choosing to do journalism the ethical way – independently, holding the powerful accountable, in a time when press freedom is rapidly eroding, HKFP is doing advocacy journalism. Choosing otherwise would look similar to HKFP’s rival, the Hong Kong English-language newspaper, South China Morning Post, which was bought by the Chinese Internet giant Alibaba in 2016. Alibaba stated that one of the reasons for the buy was to improve China’s image amongst western media. Since the change of ownership, critics had raised concerns that the 114-year-old newspaper is becoming less independent with many incidents of editorial self-censoring.

As HKFP perseveres on with its mission to “report the facts without fear, favor or interference”, in January this year, three Norwegian politicians, Ola Elvestuen, Terje Breivik and Jon Gunnes nominated the independent media for the 2021 Nobel Peace Prize​​. They told Newsweek in October that in their nomination application, they described HKFP as “essential for ensuring that Beijing is held responsible for its overreaches in the city of Hong Kong.”