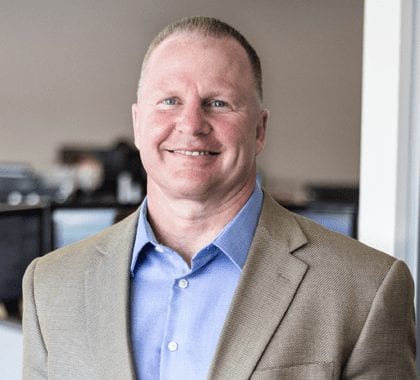 From the Marathon Station to Main Street

Jarrett founded the first Jarrett company, PackShip USA, in Orrville, Ohio, in April 1998 with his wife, Diane, while he was working as a young Vice President with FedEx. The definition of a partner, Diane ran the new business that was situated behind the Marathon gas station while raising their two young daughters so Mike could support the family and new business with his FedEx income.

He initially envisioned PackShip as a revenue stream to quickly turn profit through its heavily transactional business while he worked on his plan for his underlying passion, his third party logistics (3PL) business, Jarrett Logistics Systems (JLS).

“It wasn’t the revenue stream I was hoping it would be,” Jarrett added, chuckling as he remembered how differently business at PackShip turned out than he initially imagined.

Recalling a phone call with Diane from the first year of business where she, exasperated, explained that the only sale she had made that day was a 98 cent pen, Jarrett explained that his passion for starting the logistics company is what kept them going.

Despite PackShip generating less revenue than expected, Jarrett moved forward with his idea for JLS anyway, and in January 1999, it launched.

It was tough. The sales cycle for 3PLs is long, he explained, often taking 9-12 months to land a customer, and PackShip took years to be profitable. Ever persistent, JLS closed on its first customer, Harry London Candies, in November 1999.

Giddy with the memories as if it happened just days ago, Jarrett reminisced on the day he came upon a newspaper article where the Harry London Director of Logistics was quoted saying how much Harry London’s business had grown. After leaving 20 voicemails, Jarrett finally got ahold of him and got an appointment scheduled.

“I was so nervous when I met with him. Because we had no employees! The only ‘employee’ I had was Diane!” he added, laughing. Harry London was a great potential deal to get a newly founded company off the ground, because at the time it was approximately a $10 million company. Jarrett was terrified that the logistics director would ask to see the operation and that he would have to reveal that he was currently a one woman operation situated behind the gas station, so he breathed a sigh of relief when he didn’t ask to visit the business.

“I had to sell myself. That’s all I had. And I felt like I could,” Jarrett said of having to lean into his experience from FedEx to try to close deals. Ultimately, it was his broad base of knowledge and expertise in how to run supply chains for Fortune 500 sized companies that gave him the credibility and confidence to land big sales to grow the company in the mid-sized market.

After a couple of years, PackShip and JLS were starting to see success when another gut punch came.

“I got a PhD in bankruptcy law, and it was the most expensive PhD in world history,” Jarrett said of his self-proclaimed biggest business mistake.

While racking up around $30,000 a week in receivables from JLS’ largest customer at the time, Kidron Body, Jarrett ended up in another pivotal moment in the company’s history when Kidron Body declared bankruptcy in December 2001 and his company received just seven cents on the dollar for their $318,000 outstanding balance.

Fortunate to have a lifelong relationship with a local banker, he was able to secure a $300,000 line of credit to keep the business afloat while he continued to win more customers. And win more customers, he did. It was around 2004 that he started to feel confident that PackShip and Jarrett were around to stay, having passed the five year mark for both businesses.

It was in that 5-10 year timeframe that he started to transition from a company to a brand by aggressively diversifying his portfolio of businesses. In 2006, he landed JLS’ first multi-billion dollar customer who quickly became 30-40% of his revenue at the time. “Well that’s scary,” he said, adding, “You never want to have a customer who takes more than 15% of your revenue, because you have too many eggs in one basket. It’s too risky.”

Knowing that you can’t just land multi-billion dollar customers overnight, he began looking at warehousing as a revenue stream and purchased a 73,000 square-foot warehouse to provide warehousing and order fulfillment services.

Over the next 5 years, the family of companies continued expanding, moving into fleet services, the food industry, and the fitness industry — adding multiple restaurant chains and a gym and CrossFit box to the brand, and relocating from behind the Marathon to Main Street.

Jarrett put it simply by saying that, “The main reason that I was looking at … branding Jarrett in different verticals was because I wanted to diversify.” 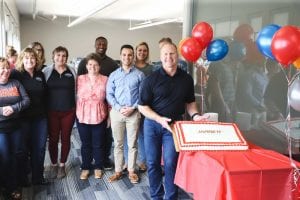 At the heart of it, for Jarrett, it’s about the people. From the first ‘employee,’ Diane, to the 100+ people on staff today, it’s about creating growth, because “more growth means more personal and professional opportunities for our employees, and that’s my why. That’s why I do what I do.”

“My job as an entrepreneur is to manage and to lead … I hire people that are way better than I am,” he said. And then he gets out of the way.

“It’s hard to compact 21 years into 30 minutes,” Jarrett closed with, but he sure has come a long way from no customers, no employees, and no revenue.