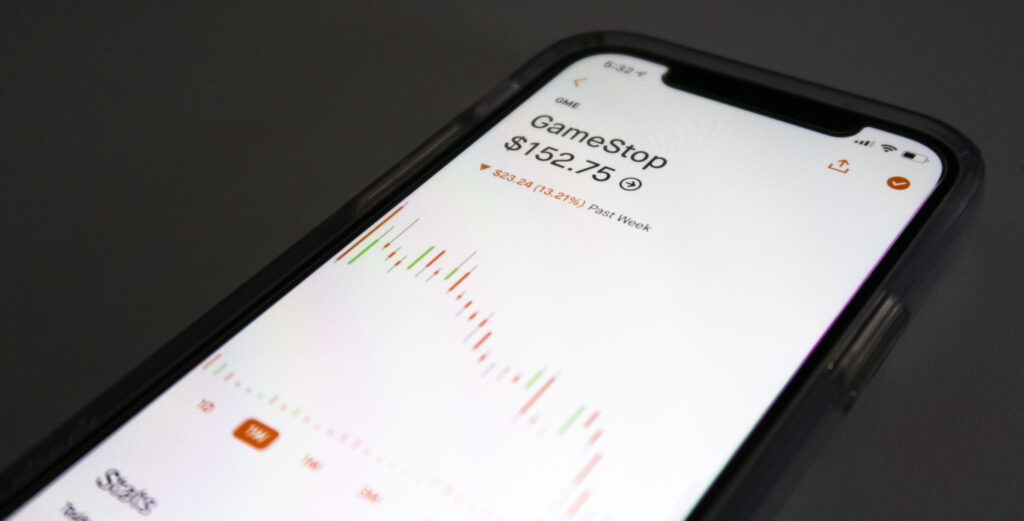 The night before, I could barely fall asleep. I excitedly watched the volatile stock chart’s jagged lines grow in after-hours trading. GameStop ($GME) had been on a tear all week, and the action was all taking place on Reddit. There, on a subreddit called r/wallstreetbets, millions of predominantly young retail investors were taking on Wall Street.

My friend shot me a text earlier in the day, “Just sold. Nice 200 percent payout overnight.”

Friday morning came with the stock reaching an all-time high. My fingers hammered away at my phone to buy five shares – the maximum amount Robinhood, the trading app, was allowing that morning.

Within a couple of hours, I had lost roughly $1,500. By Monday, the anxiety was too overwhelming for “diamond hands,” as Reddit users were calling those who held onto the stock. I sold all five shares and vowed never to invest as a retail trader again.

Time has since passed, and a more level-headed mindset allows me to look back on the gamble. I now understand that I was swept up in a frenzy of sentimental investing, and I was certainly not the only one who lost out (headlines largely focused on the few who got lucky enough to make a substantial profit).

But a troubling thought lingers in my mind: could the “meme stock” saga, in combination with an unprecedented pandemic economy, severely impact the financial health of young investors whose first exposure to investing, like mine, was a failed David versus Goliath battle? Could the little guy truly ever win in the stock market? Is money even real at this point?

These questions are not new, but the economy during the pandemic has potentially answered these questions for a large swath of young investors. And if the answers tip toward pessimism, it could have a negative impact on a generation’s financial health in the future.

‘Robinhood is Not Your Friend’

In January of 2021, federal stimulus checks were being issued, and boredom from the pandemic was further accelerated by house-bound winter weather for many. At that same time, one Reddit user, Keith Gill or “@DeepF–kingValue,” was quietly propping up the idea of short squeezing GameStop’s stock. Though he had been investing in the stock for years by that point, now, others began to notice.

How a short squeeze works is that investors buy up stock in a company that is heavily shorted – that is, a stock that is expected to fall in value. The sharp rise in the stock’s price by those trying to squeeze it causes investors who shorted the stock to sprint for the exit door and buy up more positions to recoup some of their losses. Better to lose some money than all of it is the thinking. This adds even more pressure on the stock’s price.

Gill noticed GameStop’s stock was heavily shorted, believing the stock was undervalued. He rallied retail investors on Reddit to buy it and sent the stock soaring more than 1,700 percent in roughly three weeks.

Boredom and a stimulus check is a tantalizing combination.

With each passing day of gains, r/wallstreetbets sentiment arguably grew more blind to market fundamentals. One could argue that was partly the point – to whip up so much GameStop fever that you could temporarily overlook the fundamentals in order to squeeze out the institutional investors who were heavily shorting the stock. One Bank of America analyst stopped even trying to analyze meme stocks such as GameStop because they’re being driven by “non-fundamental factors.”

When the going got seemingly too good, Robinhood, the zero-commission stock trading app marketed for retail investors, halted buying of GameStop’s stock (you could still sell your stock). No, the company didn’t halt trading for the stock across the entire market – just on its own platform. Robinhood users were essentially sidelined.

The company’s freeze on buying shares of various meme stocks occurred on January 28, and on that day, GameStop hit an all-time high of roughly $483. When Robinhood lifted the freeze the following day, the stock plummeted 32 percent. By the following Monday’s market close after the weekend period, the stock had fallen a total of 81 percent from its high.

In February, Robinhood’s Co-Founder and CEO Vlad Tenev was called to testify in front of Congress about the company’s role in the meme frenzy.

“There is an innate tension in your business model between democratizing finance, which is a noble calling, and being a conduit to feed fish to sharks,” Democratic Congressman Sean Casten told Tenev during the hearing.

The pain that retail investors felt by Robinhood’s actions was a sharp pain for users like myself. Robinhood marketed itself as a means to democratize trading by creating a (now industry standard) zero-fee commission for buying and selling stocks. It was our chance to enter the market in a low-cost, friendly manner, but now, we had a friend stab us in the back. At least, that’s what it felt like for those who lost out on GameStop and others that shared the same pain as me.

“Robinhood is not your friend,” Michael Taylor, author of “The Financial Rules for New College Graduates: Invest Before Paying Off Debt And Other Tips Your Professors Didn’t Teach You,” reminded readers in one of his blog posts.

In an interview with The Click, Taylor cited Robinhood’s design as being potentially problematic, pointing to features such as complex trading options available to young investors, which otherwise are typically used only by professionals. Other features, such as confetti appearing on screen when you buy shares, have also been repeatedly criticized as encouraging risky behavior.

“I don’t have any doubt that when you go to the casino, the casinos are going to take your money. And I believe that’s more what Robinhood is encouraging versus a different approach, which is if you [invest] slowly – and you don’t use leverage or options or individual stock picking – on a very short time horizon, then actually the investing activity is a net wealth accumulating activity,” he explained.

Taylor was not the only one offering such a warning.

“Retail investors were reminded of something I was told the first day I entered the marketplace, which is you have no friends on Wall Street,” Mohamed El-Erian, Chief Economic Adviser at Allianz, a financial services company, said on CNN Business’s “Markets Now.”

“And the shock to retail investors was that they thought Robinhood was their friend.” 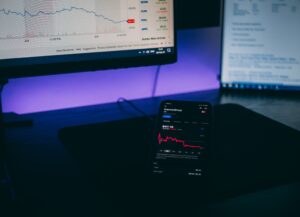 Photo by Dimitris Chapsoulas on Unsplash

Six months later, in June, Robinhood was fined $70 million by the Financial Industrial Regulatory Authority, Wall Street’s self-regulator, for “systemic supervisory failures and significant harm suffered by millions of customers.” It was the largest penalty ever slapped on a company by FINRA.

As for Gill, the mastermind behind the $GME frenzy, it turned out that he was no “amateur.” He was actually a licensed investor. In February, a class-action lawsuit was filed against him for this perceived deception and “stock manipulation.”

Gill denied such accusations to Congress. “I was abundantly clear that my [YouTube] channel was for educational purposes only, and that my aggressive style of investing was unlikely to be suitable for most folks checking out the channel,” Gill said, according to reports by CNBC.

The social media hype that had inspired me to pile onto meme stocks with the allure of quick returns is a double-edged sword. As I sat on losses, I’d cling to the r/wallstreetbets subreddit in search of optimistic encouragement. For all the comments that cried “hold the line” and “diamond hands,” meme stocks were spiraling further and further. Meanwhile, other users would boast of “life-changing” gains (some of those claims were later proven to be fabricated).

Roughly a quarter of investors with less than a year’s experience, like myself, bought meme stocks like Gamestop and AMC. In the end, we were the most likely to lose money on these investments, according to a survey by The Motley Fool, an investment advice company. Perhaps most troubling about the survey results, 73% of investors thought “the big guys” manipulated the market during the height of the frenzy.

The jury is still out on whether or not that kind of ominous data suggests the financial future is bleak for young investors, Tom Yeung, a market analyst at InvestorPlace, told me over the phone. After all, he points out, there were some investors who did make money during the gold rush for meme stocks.

“It’s not entirely clear yet, right, whether this entire generation is feeling that same scar,” Yeung said.

There are positive takeaways, though, from the hectic rise and fall of GameStop’s stock last January. Matthew Tuttle, CEO of Tuttle Capital Management, an ETF management firm, created a FOMO ETF (fear of missing out) following this year’s “meme stock” popularity. Tuttle said the Internet has allowed retail investors to have access to information that used to be only available to traditional brokers. Forums like r/wallstreetbets allow them to group that knowledge together.

“Instead of a bunch of different individuals buying an Internet stock, now you’ve got a movement buying AMC, buying GameStop, whatever it is. They can rival any institutional investor because of that connectivity,” he told me over the phone.

You could arguably lump investors into two groups: those who think the “meme stock” saga was a fad driven by an unprecedented marriage of boredom and disposable income and those who think an internet community influencing sentimental investing is here to stay. Tuttle is the latter hence his FOMO ETF.

Yeung points to the saga as also being a valuable moment for learning what one’s risk tolerance is.

“Investors have to figure out what you enjoy,” Yeung said. He added that if a retail investor found they do enjoy high-risk trading in the wake of this year’s frenzy, “Then learn the basics, learn the advanced, learn the expert art of investing and go for it.”

After my GameStop losses, I realized I have a low tolerance for stock market risks and became a very boring retail investor, but an investor nonetheless. And there, Taylor argues, is a silver lining to my meme stock gamble.

“Fifteen hundred bucks to learn an extraordinarily valuable lesson about investing…that’s a win for me,” he said. “That’s nothing in the grand scheme of building wealth over time in a good, effective long-term strategy.”

“A small loss early could be great.”