Giving a Voice to the Silenced: How Lindsay Schraad Uses Her Talent to Honor Murder Victims

Lindsay Schraad wrote her first book as a young girl in elementary school. It was about mermaids. When Schraad finished writing it, her English teacher put it on display for the class to admire. That moment set off a spark in her brain; from then on, she knew she wanted to be a writer.

Twenty years later, Schraad is now an author and an advocate for missing and murdered loved ones.

With the days of mermaid stories and pigtail braids now behind her, she uses her craft to share a different kind of story—one that is painfully raw and real. When her high school friend was murdered in 2011, Schraad was determined to honor her and other victims of senseless homicidal crime with the creation of her self-published website, The Chrysalis Chapters. With true crime rising in popularity within mainstream media, Schraad sought to be a voice for those who had theirs taken away.

Schraad’s inspiration for naming her website is poetic. She explains on the site that a chrysalis is the outer shell that protects a caterpillar as it naturally develops into a butterfly. After metamorphosis, the butterfly emerges from the chrysalis, leaving behind the shell that protected its fragile body, she explained. When their time comes, those who leave this world are no longer physically with us. They, too, like the butterfly, have spread their wings and left their shell—their chrysalis—here on earth.

The Chrysalis Chapters exists to tell their stories. “These stories belong to the families and no one else, and it is a privilege to tell them through my writing,” Schraad explained. “I wanted to create a place where victims could be honored exclusively without any gory details or aggrandizing the perpetrators.” 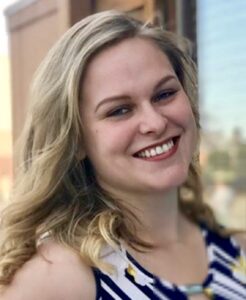 Schraad hopes to shift true crime’s focus away from the criminals and back to the victims. [Credit: Lindsay Schraad]

True-crime content has been interlaced within pop culture as far back as 1734 when Benjamin Franklin published an article in the Pennsylvania Gazette titled, “The murder of a Daughter.”  Since then, true-crime content has continued to rise in popularity and is documented throughout history.

Documentaries, movies, shows, and books discussing the notorious murders of Nicole Simpson, JonBenét Ramsey, Selena, and Tupac rocked the entire world in the 1990s. Fast-forward to today, and you can’t scroll through Netflix without being tempted to click on programs titled, “Making a Murderer” or “I am a Killer.”

According to a 2019 survey conducted by research firm CivicScience, 2,000 adults in the United States were asked: “How interested are you in the topic of true crime stories for entertainment purposes?” Over half of the respondents indicated they were somewhat interested, with 22% suggesting they were very interested.

The options are unlimited for true-crime bingers to get their fix. CivicScience also found that 44% of the respondents report they consume true-crime shows and movies on all of these platforms: Netflix, Amazon Prime, Hulu, HBO, NBC, ABC, CBS, ID channel, Lifetime, Oxygen, and “Other.” According to NPD BookScan, via  Publisher’s Weekly, in the year 2018 alone, more than 1.6 million print copies with true-crime titles were sold.

These services, according to Schraad, are healthy when consumed in moderation. However, “There are too many books/articles/podcasts/movies that glorify the perpetrator of the crime,” and Schraad “believe[s] the victim should be the focus.”

“People can list off all of the serial killers they know, but can anyone name their victims?” she said. “Why should anyone worship these monsters who have destroyed lives? The memories of those lost to murder should be the focal point of any and every article, book, movie, and podcast about crime,” Schraad said.

One of the murder victims Schraad honored through The Chrysalis Chapters is a child named Gabriella Lamorie. Gabriella was only two years old when her parents killed her in January 2018.

Lamorie’s aunt, Britney Hartman, said Schraad’s coverage of her niece was the best she had ever read. “My niece’s case was unfortunately pretty ‘famous’ in the area it happened in,” said Hartman. “It got a lot of press, especially at first. But all of those articles were written with the crime in mind, or the criminals and their charges in mind. None of them focused on Gabby, my niece. I cried and cried reading her words. They so touched me. They really helped my hurting heart. No news article does this.”

Schraad opened Gabriella’s story on The Chrysalis Chapters by writing, “On September 20th, 2015, the world became much brighter with the birth of a beautiful brown-eyed baby girl. She was named Gabriella, and she spent eight hundred and forty-eight days on earth. She was born on a Sunday and died on a Sunday, and brought unconditional love and joy to those around her in the time in between.”

The story ended with a heartfelt poem written by Shcraad.

According to Hartman, Schraad differs from many news sources, especially when sharing her niece’s case. “Most content online or on TV is said to be for the victim—but it’s for likes, comments, and ratings. Lindsay is not here for fame, fortune, or likes. She really is there for the families and victims and that is rare and very, very needed and appreciated.”

Schraad begins her research by first reaching out to the victim’s family to ask for permission to share their story. “Permission is important to me and my values as a writer, and I try not to write an article without it,” she explained.

According to Hartman, that made a world of difference. “Lindsay did contact me and ask permission, which I think is a huge thing. Most people don’t, and I know sometimes that hurts families.” Hartman continues, “She really was sweet, kind, and made it a point right away to explain she was there only for the victim and family.”

Schraad has also honored Brittany Phillips, an ambitious young woman who was sexually assaulted and murdered in her Tulsa, Oklahoma, home in 2004, just days before her nineteenth birthday. The case remains unsolved.

Dr. Maggie Zingman, Phillips’ mother, has developed a close relationship with Schraad since her daughter’s story was published on The Chrysalis Chapters titled, ‘Murder of the Girl Next Door.’

“You know, sometimes dealing with loss can be a very solitary path,” Zingman said. “There are many, many untold stories out there, and when somebody wants to give the story a voice, it is a true gift. Of course, Lindsay is not just the gift of the story; she is Passion.”

Dr. Zingman has spent the last 14 years traveling almost 300,000 miles through 48 states on 20 “To Catch a Killer” tours to share her daughter’s cold case. She has had over 300 regional reporters share Brittany’s story. One Google search about Brittany Phillips’ senseless murder generates hundreds of articles.

“For me, it probably was not the same difficulty that others might have who aren’t used to telling the story,” Zingman said, “but I could tell in Lindsay’s style that she has the ability to make people feel comfortable. She never was pushy. She has the ability to pull information out in a very passionate and compassionate way.””

Throughout the story, Schraad meticulously placed stanzas of Oscar Wilde’s, “Tread Lightly, she is Near” before each section. The story begins, “Tread lightly, she is near / Under the snow, / Speak gently, she can hear / the daisies grow.” 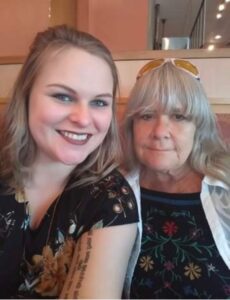 Dr. Zingman, right, has had her daughter’s story told hundreds of times. She said Shraad had a passionate and compassionate way of gathering details. (Credit: Lindsay Schraad)

Dr. Zingman and Schraad, along with another close friend, Angela Suttner, whose son Kenny was a victim of bullycide in 2016, teamed up to write a memoir last year commemorating Kenny’s death in ‘Where the Trail Ends: The Kenny Suttner Story’.

Despite the many friends Schraad has made through her reporting, there will always be criticism—especially when covering such personal and sensitive topics. After Schraad published a story about the 2017 Broken Arrow, Oklahoma, home invasion that resulted in the deaths of three intruders, some misconstrued the message of her story to be a stance on gun control.

“Although my purpose was not to take a stance on gun control, but rather tell the story of how a person’s bad decisions can affect their life, I still received hateful comments from people who misunderstood my article and thought I was against guns,” Schraad said. “I did my best to tell the mother’s tale of grief, but apparently my writing still offended some people.”

There have been many families who have politely declined Schraad’s request for an interview. Even though she feels that all cases deserve coverage, she respects their wishes and chooses not to go forward with the story. “Families of missing persons and unsolved homicides typically want as much exposure as possible, but this is not always the case,” explained Schraad. “I think everyone tires of talking to the media at some point, whether the case is solved or unsolved.”

Nevertheless, the lasting impression Schraad has made on the families she honors through her work continues to grow. “There are good people out there. There are journalists and others out there who really do love and care and want to do what’s right,” Hartman said. “I would bet my last penny that Lindsay would never publish a known lie or purposely skew an article for the story. Who else can I say that about?”