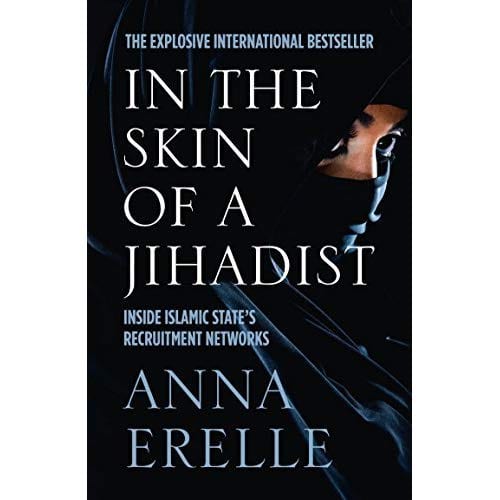 Going Undercover and Stumbling Upon a Terrorist Husband

“In the Skin of a Jihadist” book cover

Going undercover on social media platforms to interview members of the Islamic State of Iraq and Syria (ISIS) sounds dangerous – a job that should be left to government investigators with proper security clearances. But one bold French journalist, writing under the pseudonym Anna Erelle, did exactly this and lived to write about it in the book, “In the Skin of a Jihadist.”

The book caused waves in France. It provided deep insights into how ISIS used digital platforms to recruit young women. As for Erelle, she could have never predicted that Melodie, the identity she assumed on Facebook, would become involved in a month-long relationship with a high-ranking militant for the Islamic State in Syria, Abu Bilel. Within a month, Melodie became Bilel’s wife, embarked on a trip to Syria, and learned the hard way that journalists should probably not get involved with terrorists. Melodie changed Erelle’s professional and personal life forever.

Erelle was always fascinated by erratic behavior and wanted to understand how young women and teenagers were drawn into ISIS by digital propaganda. She believed that the best way to do this was to create a fake Facebook account and immerse herself in the experience.

Shortly after setting up her phony Facebook profile in spring 2014, Erelle shared a video that depicted a terrorist taking inventory of his weapons. Not long after the terrorist in the video, who called himself Bilel, sent her three private messages.

“Salaam alaikum, sister. I see you watched my video. It’s gone viral,” the messages said. “Are you Muslim? What do you think about mujahideen? Last question: Are you thinking about coming to Syria?”

Erelle answered as Melodie, pretending to be an innocent and sensitive 20-year-old who had recently converted to Islam. Immediately Bilel wanted to speak with Melodie via Skype but Melodie held off. Instead, they exchanged more than 100 messages where they flirted and spoke about Islam and Bilel’s life in Syria. Erelle hoped Melodie could coax Bilel into reveal important information about ISIS and also have a fascinating piece to publish.

Eventually, Erelle borrowed a hijab and a black dress and was ready to have a face to face conversation with the terrorist. During their first Skype session, Bilel explained how he had spent the last 15 years of his life spreading Jihadism around the world and was part of one of ISIS’ biggest victories of taking Rakka. He did not shy away from telling Melodie that killing people was his job. Erelle used Melodie’s innocence to push him for more detailed answers. Meanwhile, Bilel had become infatuated with Melodie, complimenting her on her beauty. After the first Skype, Bilel asked Melodie to marry him and join him in Syria. Erelle knew that the man behind the screen was dangerous and she had to think about whether or not it was right for her to pretend to have feelings for this murderer to get her story.

Despite some misgivings, she decided to continue the charade, that what she could learn about jihadism through this relationship outweighed any potential ethical stumbling blocks.

Every night for a month, Erelle put on her veil, sat on her sofa, and transformed into Melodie to Skype with Bilel. She listened to Bilel speak about her future glamorous life in Syria caring for orphans, hanging out with her girlfriends while he would be out killing, and making the world one Muslim territory. When Bilel spoke of his secret meeting with terrorist leader Abou Bakr al Baghadi, Erelle realized that Bilel was far more powerful and dangerous than she had expected.

This realization made Erelle even more obsessed with the story. She began to ignore all other news around her. She had to continue to follow Bilel’s life for Melodie, so when Bilel devised an intricate plan for Melodie to enter Syria, Erelle packed her bags and followed through.

She traveled to Amsterdam for the first leg of her journey to meet Bilel. In Amsterdam, Bilel instructed Melodie to buy a new disposable phone and a plane ticket to Istanbul. In Istanbul, Melodie would be greeted by an older woman sent by ISIS to accompany her to Syria – and into Bilel’s arms.

While Skyping with Bilel from her Amsterdam hotel room, Bilel told Melodie the woman in Istanbul could no longer meet her. Erelle made Melodie panic and refuse to travel but instead of Bilel comforting his wife, he became aggressive. “You’ve made a fool of me in front of the hierarchy here,” he said. “That would not easily be forgiven.” This convinced Erelle to return home to write her story.

Erelle submitted her article, but the Paris magazine decided to delay the publication due to Bilel’s importance to ISIS. The magazine wanted to be sure the article was accurate.

Over the next few months, before the article was published, Bilel managed to reach Erelle on her personal phone and threatened Melodie for not following through with her promise of marrying him. Erelle continued to receive calls from various Syrian numbers, discovered that her phone was being tapped by the police, and was forced to move out of her apartment.

Then Erelle read a report that Bilel had been killed by a bomb. Instead of feeling relieved she felt guilty that her correspondence might have caused his death. Shortly after she learned that Bilel was still alive. Erelle described herself as being in a mental prison.

After the article was published Erelle found a video of Melodie in her veil on her couch, with the following words on the screen: “My brothers from around the world, I issue a fatwa against this impure person who has scorned the Almighty. If you see her anywhere on earth, follow Islamic law and kill her. Make sure she suffers a long and painful death. Whoever mocks Islam will pay for it in blood. She’s more impure than a dog. Rape, stone and finish her.”

Today, Erelle remains under police protection, cannot reveal her true identity, and no longer works on any stories on Islam or ISIS.

In Erelle’s view, the only way to have gotten this accurate, first-hand account of Jihadism was to break tenets of journalism. She lied about her identity and lied about her intentions. Erelle, through Melodie, could speak to Bilel face-to-face to not only learn about an ISIS fighter’s daily life, thoughts, and meetings but also learned how Bilel used his “charm” to manipulate girls just like Melodie.

What she wasn’t prepared for was the psychological toll it took on her and the way it would change her life. Erelle sacrificed it all for this story. She now only writes under a pseudonym and lives under a fatwa. When asked by The Guardian whether she has regrets, Erelle replied, “Today, I don’t regret it because I learned a lot about ISIS and I learned a lot about me too.”