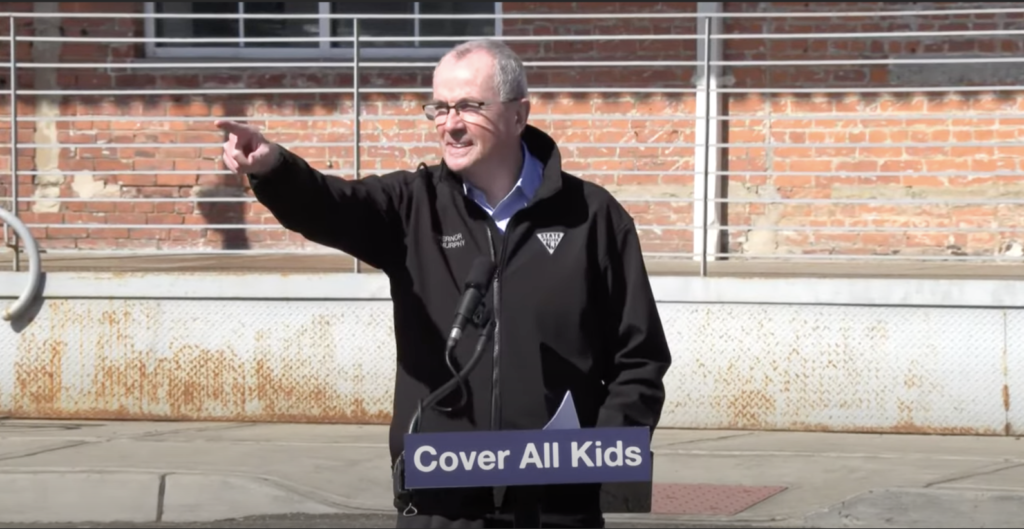 Gov. Phil Murphy highlights his budget proposal for the Cover All Kids campaign at the North Hudson Community Action Corporation in Passaic on March 30, 2021. [Credit: New Jersey Office of the Governor]

The provision was included in the governor’s FY 2022 budget proposal as part of “critical investments to help New Jersey emerge from the pandemic stronger, fairer, and more resilient,” according to a press release on the matter.

The $20 million would fund the first year of the Cover All Kids initiative, a two-year campaign to reach all uninsured New Jersey children who are currently not eligible for Medicaid. Speaking at the North Hudson Community Action Corporation in Passaic, Gov. Murphy highlighted the state’s goal of ensuring affordable and accessible health care to nearly 88,000 children without coverage. With the budget of $20 million they will be able to extend health insurance to 53,000 children in the next year, he said.

According to the Office of the Governor, Phase 1 of the campaign will remove barriers and support connections to coverage of the uninsured children. The second phase will then provide coverage options for children of undocumented status and those whose families’ incomes exceed limits for the state’s publicly funded health insurance program NJ FamilyCare but still find coverage unaffordable and out of reach.

“No child in New Jersey should be left without the support and security of health care coverage,”  Murphy said.

“It’s always been stressful to go to the doctor and not know how I will be able to pay my bills, and the pandemic only heightens my fears,” said Rosa Paraga, a parent of an uninsured 7-year-old and small business owner, who introduced Murphy at the press conference. 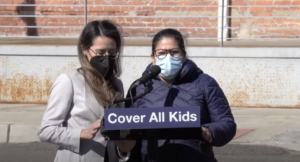 Rosa Paraga expresses her gratitude towards Murphy and the Cover All Kids campaign in Passaic on March 30, 2021. [Credit: New Jersey Office of the Governor]

Paraga, who was born in Peru, said she was able to realize her dream of opening a restaurant in Paterson, New Jersey. “A campaign such as Cover All Kids gives me a sense of relief to know that my daughter will be able to get the medical attention she deserves,” she said.

Some who watched the March 30 press conference on Facebook Live applauded Murphy for the initiative, while others challenged the new campaign’s fairness.

“No parent that works for a living should have to spend the whole paycheck on health care for their child while parents that don’t work get for free,” said Adam Hanisak with whom some Facebook viewers agreed.

“Is the gov’t going to be responsible for every child? Pay for every child?” asked Connie Jarve. “Or are you again just using the “Robin Hood” administration to single out working people and taxing them even more?”

Even as some viewers challenged the Cover All Kids initiative on Facebook Live, at the press conference, Democratic State Senator Joseph Vitale said, “There’s nothing more important than having a kid have access to care. All those families that are here today understand what it means when your kids are sick.”

According to Gov. Murphy, the Cover All Kids initiative will help the state become a vanguard to provide more children with the security of health insurance coverage. In a global pandemic in which parental fear has increased, the new campaign is a demonstration of action from the state.

“This is the game-changer that we have all been waiting for,” added Assemblyman Gary Schaer. “This is the difference between not doing and doing. This legislation will make fundamental change, not over there or over there, but right here in this wonderful city, Passaic. Whatever your background, your language, culture or religion, we make the difference with this legislation today.”