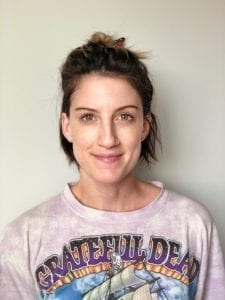 Hannah Sparks grew up in an Appalachian suburban town called Spartanburg in South Carolina. Her parents were folk musicians. They played in a band together called “Perry Road” named after the street her mother grew up on. As a child, Hannah tried her hand at a number of instruments, including clarinet, cello, guitar. “I hopped around as a kid and that continued through adulthood, ” she said.

“My earliest career interest was to be a painter,” she said. “But I’m a shitty painter so it didn’t work out,” she said laughing.

She went to college in New Orleans at Loyola University with the aim to make her way to journalism. After graduation, she detoured from her journalistic aspirations, spending 10 years working in and around kitchens as a baker, working in cafes and a short stint in fine dining.

“It was 10 years of being in kitchens but also 10 years of trying to get out of there,” Hannah said. While she kept her journalism dream alive, she kept getting sucked back into cafes when bills were due.

Tragedy would spur her to finally make the leap she had wanted to make for so long. Sparks’ mother was diagnosed with ovarian cancer in 2012 and died within nine months. In 2015, her father suffered a heart attack. He held on for 10 months before being taken off life support.

Through her grief, Sparks realized life was short. Rather than sink into depression she changed her life with remarkable speed. In 2016, she enrolled in a publishing course, and she started her journalism master’s at New York University’s Online American Journalism program in the Fall of 2019.

“Once it came down to it I knew this was my time to shine. I didn’t expect that at all obviously and it’s nothing I would wish for again. But it inspired me about life and how to make the best of it with the people around.”