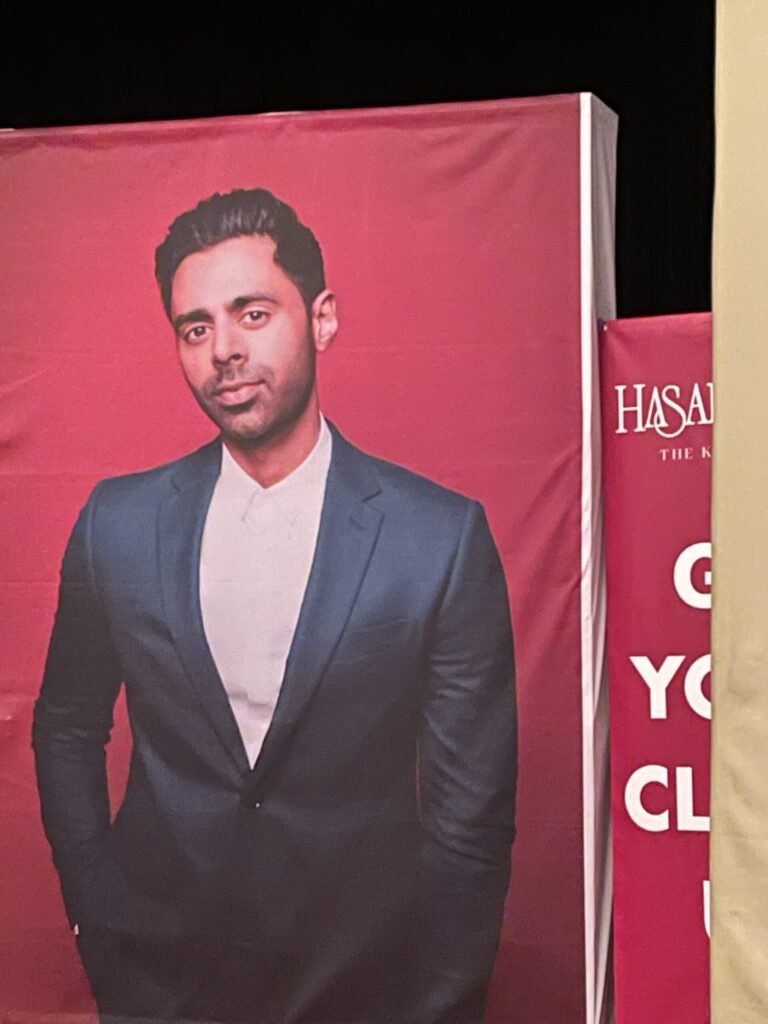 A poster of Hassan Minhaj displayed during his tour “The King’s Jester” at the John F. Kennedy Center for the Performing Arts in Washington, D.C. [Credit: Paras Shah]

Hasan Minhaj first garnered global fame for his 2015 Netflix special Homecoming King, a humor-filled commentary about the comedian’s “arrival in the US, meeting his sister, interracial love, racism, bullying, and his family’s quest to achieve the elusive American Dream.” With his Netflix series Patriot Act, Minhaj took his storytelling in a new direction: Using his jokes to highlight specific social issues including police brutality, the crushing impact of student loan debt, and the soaring cost of prescription drugs.

Patriot Act is certainly a comedy show—when it aired from October 2018 to June 2020, the series was taped in front of a live audience and the punch lines delivered plenty of laughs. But it is also deeply-researched, fact-based advocacy journalism.

Advocacy journalism straddles the line between hard news reporting and opinion pieces. Like all journalism, it verifies facts, considers different sides to a story, and serves the public good. However, advocacy journalism does not pretend to be unbiased. Instead, it pushes for a particular goal or outcome, an approach which is ethical so long as the journalist is transparent about the result she hopes to achieve.

Patriot Act meets all of these criteria. One episode discussed the skyrocketing cost of insulin over the last thirty years. Minhaj traced the history of insulin, from its discovery in the early 1920s to the present day where three major pharmaceutical companies control its production. Minhaj displayed an array of charts, diagrams, news reports from CNN and ABC, clips of expert congressional testimony, and government reports to map the complex relationships between different companies in the insulin supply chain.

Each fact Minhaj presented was carefully vetted and he covered the balanced story from different angles by including statements from pharmaceutical company executives, insurance company representatives, pharmacy benefits managers, and consumer advocacy groups.

Minhaj took a notoriously complex topic, one that routinely stumps regulators and industry experts, and made it widely accessible to millions of people. Moreover, he did so in a way that was rigorous, engaging, and memorable—the hallmarks of great journalism.

But Minhaj was not a neutral observer. He made it clear to the audience that the cost of insulin is a major problem that kills thousands of people each year. And he pressed for a specific solution, urging lawmakers to pass legislation that would break up the patents that the top three insulin manufacturers hold on the drug. By explicitly declaring his bias toward the problem and hope for a particular solution, Minhaj avoided the ethical pitfall of appearing falsely neutral on the issue.

This is a stance that more journalists who advocate for a particular issue should adopt. Every journalist carries some implicit bias toward the topics they cover and that bias can manifest in the choices of what to cover, which sources to use and trust, and how to frame a story. Advocacy journalism does not mean the reporting is biased or unreliable, so long as the reporter is transparent about their perspective.

Patriot Act and similar shows are a unique blend of comedy, journalism, and advocacy which represent an important branch of the Fourth Estate.