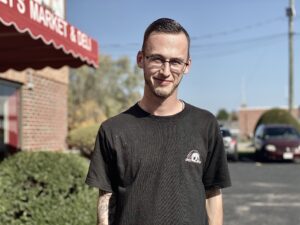 AGAWAM, Mass. — A musician from a small Massachusetts town released a self-written album at the end of November with a collection of songs he said saved his life.

Andy Moffatt, 29, of Agawam, Mass., has been writing since he was about 9 years old. He started with stories in school but turned to writing music in his early teens.

He started as a rapper, but his sound has since evolved into a mix of pop, R&B, singer/songwriter and alternative.

On Saturday, October 22, he was less than a few hours away from hearing his newly completed album for the first time after working on it for nearly two years. Most of the writing was done right from his bedroom.

“This album is the most important piece of art that I’ve ever done because of the story that’s behind it,” he said. “I went through a relationship with somebody, and it just kind of taught me how to care for a person even when you’re not getting your way.”

It was difficult for Moffatt to navigate through the end of that relationship because the couple was on and off for a few years, but this collection of songs pulled him out of what he called a personal darkness.

“She’s the greatest person in my eyes,” he said. “And things just didn’t work, and the only way that I know how to cope with that kind of stuff is music. If I didn’t have music, I know for a fact I’d be dead or in jail, like easily. This is just kind of my last offering to her.”

This album, titled University Park under his musical alias YRBK, is laid out in a dozen songs mulled into the last bit of closure he said he needed to move on with the next chapter of life with the ability to love himself and others equally.

The album mixes his roots of R&B with a pop and alternative vibe to the ears of the listener, much like one song titled “Grown Apart,” which captures his emotion about what he feels he might have lacked in a relationship and how the two became different people, thus growing apart.

His friends say that his passion for music distinguishes him as an artist.

“He always surprises me with not only how talented he is, but how he continues to raise the bar for himself and people around him,” said Anthony Masotti, who has known Moffatt for 25 years and collaborates with him regularly.

The friends started making music just for fun in the early 2000s, writing joke songs about things like their cats and favorite restaurants. But they quickly figured out music was the best outlet they had.

“It was our way to communicate with a confusing world,” he said.  “[Moffatt] is one of the most talented artists I have met to this day. He continues to outdo himself on each song and brings out the best in each artist he is working with.”

When he’s not making new songs, Moffatt paid the bills as a certified car detailer, which is how he met Balazs Busznyak, one of the founders of local creative production company Seven Roads Media.

They met about a year ago when Busznyak and his team were doing a shoot where Moffatt was detailing cars, and the two quickly formed a friendship.

“In his music alone, he puts unmatched passion into his work and he’s one of the most genuine people I’ve ever met,” Busznyak said. “Like overall as a human, he’s a great guy, but I think that really what sets him apart from other artists is that he’s the same no matter what.”

Moffatt has a fanbase of people who’ve reached out to him to say his songs saved them and brought them clarity, so the anticipation to get this album into the world built up. Now, it’s a weight off his shoulders.

Putting his heart into a cohesive set of tracks has been a long time coming, and his only advice for budding artists is to create art for themselves.

“I’ve seen my friends go through too much, I’ve been through too much to just make a song you can just bop your head to,” he said. “Just do it for you and not think about it too much, ‘cause that s*** will eat you alive.”