Home is in The Mile High City

(DENVER) — When Morgan Reaka graduated from Southern Illinois University of Edwardsville in December of 2019 with her new degree in molecular biology, she and her partner, Logan Mitchell, had their sights on moving to the Denver area by January 2021. But the world had a different plan for them.

As the COVID-19 pandemic began to make its way across the United States, it affected Reaka’s everyday life more than she could have imagined. Her new internship fell through in the first week of March as cases started to rise. While working as an EMT, she saw how the world was changing and began to feel unsafe. With multiple family members who were immune-compromised and her work as an EMT putting her at risk for getting the virus, she knew that she had to leave.

Reaka and Mitchell made the hard decision to give up their place and move in with his family so they could begin saving up for their cross-country departure.  For two months, the young couple worked and saved, and by May, they were ready. Reaka knew it would be a big gamble, stating, “I would have never picked to move during a pandemic. That was never the original plan because I know it’s so risky. However, as strange as it is, it actually saved us thousands of dollars,” as people and businesses started to waive deposits and fees. Gas prices were so low the couple spent only $75 on gas for the 900-mile trip.

Denver had an extra allure for them as a place where people took the pandemic much more seriously, making them feel safer. On March 26, Colorado Governor Jared Polis issued a statewide stay-at-home order through April 11. The order said that Coloradans should leave their homes only for “critical activities.”

These activities did not include home showings, which for Reaka and Mitchell turned out to be a big obstacle. For years Denver had been experiencing a rise in population, and while many thought the pandemic would bring a lull in the market, it only grew. In 2019 it was customary to start seeing a decrease in housing sales around Labor Day, but in 2020 it was the busiest of the whole year, leading to their most active summer on record. According to Denver’s November real estate report, total pending residential sales were 6,341, 26% more than in September 2019.

Even with new changes happening every day, the numbers were not the only surprises. As newcomers begin to set roots, they no longer look for the desired downtown city lifestyle, but they now want real space.

As the stay-at-home order lingers, so do people working from home. With remote working and online schools being the new normal, people are looking for homes with dens and offices, so parents can have separate places to work and another for kids to be doing virtual learning. Cannon adds, “It’s not just the spacious homes and beautiful views that draw people to move to the Denver area, it’s a healthier way of life.”

The lifestyle is what particularly drew Reaka and Mitchell to Denver. “Before we got together, we had both come out a few times and fell in love with it.” Reaka says they didn’t feel like in Illinois that they “weren’t surrounded by people with the same mindset as them. Open-mindedness to alternative treatments and changing lifestyles to be more fit and active. Things like that were not on the top priority of the people around us in Illinois. We always felt kind of like aliens and not fitting in. And now, being in a place, regardless if we are working from home, being able to start exploring those things is huge.

Reaka hopes to study cannabis and its effects on specific illnesses in molecular research and wants to be in a market that creates a reliable industry to learn. Mitchell is a health coach and personal trainer for Noom, who was lucky enough to have a virtual job and was able to keep the same position moving from Illinois to Denver.

While People like Reaka and Mitchell are excited to start new roots in the Denver area, there are those who have lived in Denver all their lives and are beginning to feel the changes, and not for the better. Even with all of the wonderful opportunities in the Denver area, it does come at a price. In 2010, a single-family home’s average sales price was $265,674. Just five years later, it rose to $404,774. As of September, average sales prices hit a record-breaking high of $606,330.

The cost is not just to people’s wallets, the rise in prices affects communities that have been around for generations. Villa Park is still mostly middle class for Hispanic families but is slowly being demolished home-by-home and surrounded by new trendy restaurants. In 2016, the median value of a home in Villa Park was around $192,000, but today, it is estimated at $390,278.

Villa Park is primarily single-unit zoning on the east side of the neighborhood, with two-unit and row home zoning on the west side. As Denver implements new zoning plans, the city believes building a light rail on the east side of the neighborhood can increase the area density. This plan allows for rezonings to make the cheap single-unit housing stock eligible for purchase and redevelopment into duplexes, row homes, townhomes, and condos. This creates an ideal condition for transforming a relatively affordable area into a pricier one.

Wendy Bethurum, a Denver nurse, born and raised in the Denver area, now lives in Villa Park and sees the effect the changes have on the community. Bethurum says that there is much growth happing from the light rail coming through the neighborhood. Houses are selling and flipping, and there is an increase in the prices homes are selling. “I think for the people that own their homes in this neighborhood, it’s great. I think it’s a sad thing for the people that rent. That can be difficult because renting prices keep going up, and then they are struggling to stay in the neighborhood.”

Although new housing opportunities are crucial to the low inventory of housing and Denver struggles with population growth, it does not mean that people in neighborhoods need to be pushed out. In March 2019, the National Community Reinvestment Coalition (NCRC) released a study on an analysis of the U.S. Census Bureau and demographic data from 2000 to 2013. This study concluded that while gentrification is pushing out communities such as lower-middle-class families, this does not need to happen. Instead, there are measures cities and communities can take to lessen the impact of gentrification.

The study looks at data and patterns, observing that community leaders have developed approaches to encourage investment and avoid their communities’ displacement. Most states and many local governments can offer caps or breaks on property taxes for long-term homeowners, known as a homestead exemption. Another suggestion is to provide renters with rent to buy options to have more security and time to own their own home, allowing them to stay in the communities they know and call home.

In the past, Bethurum has tried to use some of these helpful methods with a property she owned by filing it under a section eight housing subsidiary but found it difficult to qualify even as a landlord. Section eight or housing desire voucher program have to meet earnings limits and different requirements and pay 30 percent in their earnings closer to rent. “Especially in our current environment, we as a nation have a responsibility to help people stay in their homes and off the streets. We need to do whatever we can.” Wanting to help with Denver’s shortage with qualifying home for section eight, Bethurum was disheartened when there was so much red tape preventing her from listing her property. She hopes that someday these processes can be fixed and help more Denver residents who are hard-working and just trying to provide for their families.

In communities like Villa Park, people have lived in their neighborhoods for twenty to fifty years. Families will have homes near each other and create communities with their neighbors. While it is good for the economy to grow in these smaller communities, it will provide more jobs and income, but this does not mean it needs to come at the cost of pushing families out of their homes. Bethurum says, “What I wish people would see is if they knew more of the people they would see that they are hard-working family-oriented people. They may not have many worldly possessions or pretty yards, but that they are really good people. Don’t look at the outward appearance of the neighborhood but get to know the people who live there.”

Denver is a fast-growing city that has created a diverse community. It is a place that is open to people like Reaka and Mitchell, excited to start their new lives and someday their own family. Nevertheless, we can not forget the people who settled there before, calling Denver their home for generations. 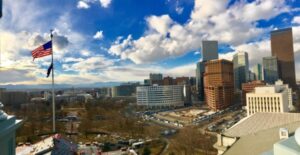