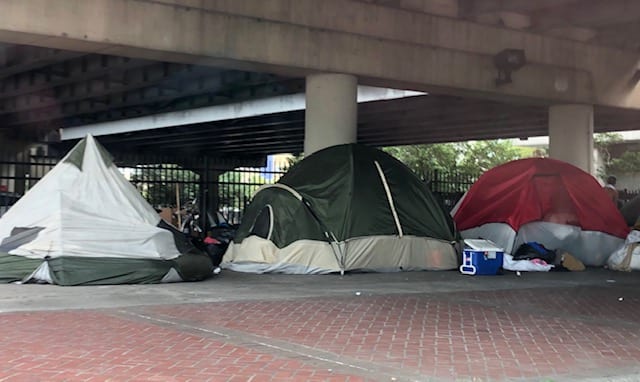 Tents along St. Charles Avenue under the overpass of U.S. 90. (Caleb Bloomfield)

Tents along St. Charles Avenue under the overpass of U.S. 90. (Credit: Caleb Bloomfield)

New Orleans, La. – The Warehouse District in New Orleans is exactly what it sounds like: a neighborhood with streets populated by old warehouses. However, most of them have been gutted and converted into high-end loft apartments. Walking around just one block in the area, one can find a luxury apartment building on at least three of the four corners of each intersection. While not the size of skyscraper apartments that are being quickly built in the likes of downtown Brooklyn seemingly every month, the windows are tall, giving a glimpse into the cascading height of what is sure to be overpriced, loft units.

As new, yuppie couples move into the eggshell-white spaces of modernity, the paint of the formerly thriving businesses that lurked these once dodgy corners of the city chip away. Against the rustic, brick canvas, one can make out faded white ink that barely reads “National Fruit Flavor Co.” with a current location not far from this former one. On the next corner, at Andrew Higgins Boulevard, a building of lofts takes up almost an entire city block, and here and there the outside of the walls are riddled with “Woodward Wright & Co,” with sometimes the additional adage of, “1912,” the founding date of the building.

Yet a mere two blocks from this same area, with all of its gentrified glamour and smokey appeal, is U.S. Route 90 Business at the end of the Crescent City Connection spanning over the Mississippi River. Residing under this bridge, which overshadows the Warehouse District, another demographic resides, the homeless. At almost any time of day, commuters on their way to work stare straight into the abyss when stopped at a red light, avoiding any kind of acknowledgement that a man with a sign that reads, “I won’t lie: need a beer,” waves incessantly at the driver towards their seat window. When that light turns green, those same drivers will pass by the tents, with interiors that remain a mystery.

In 2017, a resident here in the Warehouse District was moving her belongings from one unit to another in the same building she moved into a year before. “I moved to this area because I wanted to live by myself,” she said, “And this area seemed to offer more safety and security for a single woman than other areas of New Orleans.” However, she said that she would not walk under the overpass by herself. Even when she wants to go to the local hotspot Bakery Bar, which is right on the other side, she drives.

That same year, in the summer of 2017, the homeless population of this area was told to clear out of the space that they barely made a home in the first place. According to WDSU news, homeless people who settled under the bridge were given 72 hours to clear out all of their belongings, and whatever belongings were there by the time the sanitation crews showed up were to be discarded. No one in the area was outraged by this, nor did they take steps to assist the homeless population in moving into more practical living situations like the nearby homeless shelter. If anything, some residents of the neighborhood were quoted as saying, “We’re allowing these people to be out here,” at the time of this decision.

Thus, the vicious cycle continues: two people on opposite sides of the spectrum are separated by a car window. And with every day that passes, the communities who once built those warehouses fade from memory, as the sun-beat skin on the faces of displaced individuals can only be found in the rearview mirror. Out of sight. Out of mind. Gone.