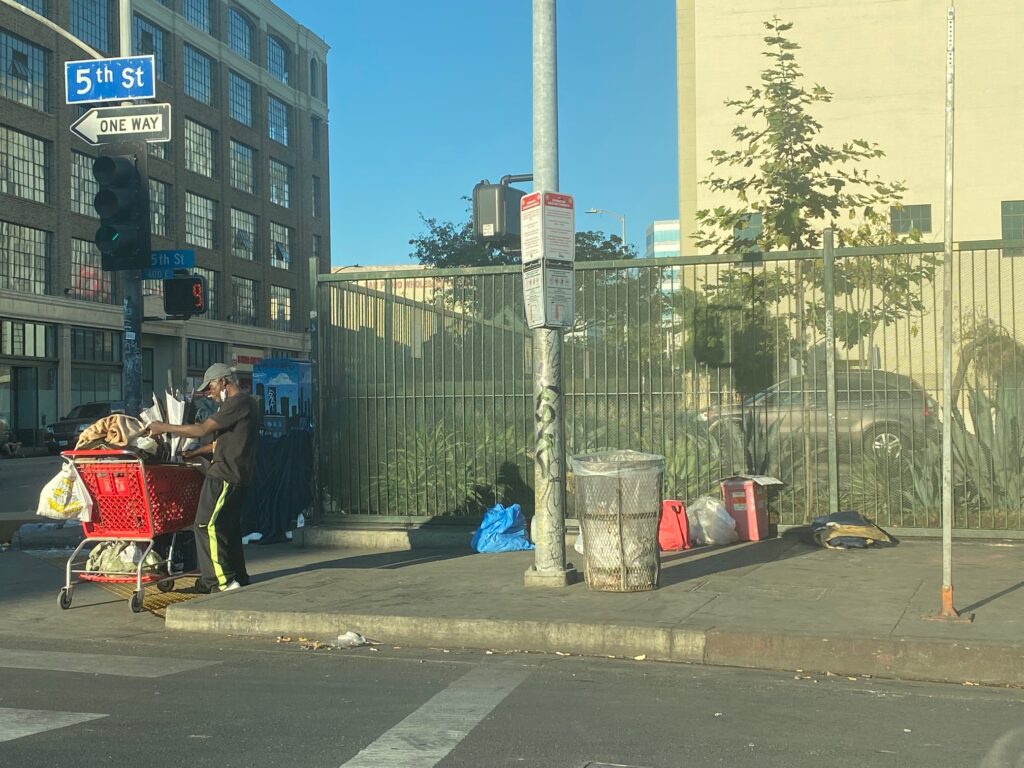 A man using a shopping cart to house his belongings while traveling along Skid Row in Los Angeles. [Credit: Iman Palm]

(LOS ANGELES) — As living expenses in Southern California have skyrocketed, many residents have been displaced and forced to live on the streets. The homelessness crisis in Downtown Los Angeles has only gotten worse, but that has inspired multiple organizations and individuals to find ways to help those in need.

Many of those facing housing insecurities live in the area known as Skid Row. According to local news site Laist.com, around 4,700 people had some sort of makeshift shelter on Skid Row in 2020.

Many have turned to Skid Row as a temporary solution for housing. The area consists of 50 square blocks located just east of downtown Los Angeles, according to the Skid Row Housing Trust website. Skid Row is also the location of one of the nation’s biggest concentrations of homeless people, CNN reports.

Los Angeles County has relied on nonprofit organizations and religious groups to help those in need. But as housing costs continue to rise while the number of shelters declines, many residents and activists have criticized Los Angeles county officials for their inability to help those living in Skid Row. 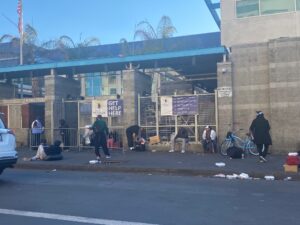 People outside of a building on Skid Row. [Credit: Iman Palm]

A Nonprofit Pitches In

Lisa Rios, the Skid Row Housing Trust manager of communications, gets emotional when talking about the many Californians who face housing instability.

However, the work done at the nonprofit attempts to lessen the burden for those who face chronic homelessness.

Founded in 1989, the organization was originally intended to preserve single-room occupancy (or SRO) units. According to the U.S. Department of Housing and Urban Department, these units are meant to provide a living and sleeping area for one person with the intention of them sharing bathrooms and kitchens with other residents.

Issues such as gentrification and redevelopment led to the loss of affordable housing across the city, NPR reports. In the mid-2000s, the organization decided to redefine its focus to include services that connect individuals with resources that will help them get back on their feet, as executives saw homelessness in the city worsen.

Social-distancing measures caused by the ongoing pandemic made it hard for homeless people to find space in shelters. According to Rios, the institution was still focused on its mission statement to assist those who experience chronic homelessness during the worst moments of the pandemic in Los Angeles.

The institution was able to move people into four new buildings that were under renovation.

Rios said that the organization partnered with L.A. Can, another local group, to install hand-washing stations on the sidewalk next to their buildings in Downtown Los Angeles.

“Because a lot of the people who were on the streets didn’t have access to clean water, we were also concerned with the larger community as a whole, keeping everyone safe,” Rios said.

According to Rios, this has contributed to having fewer people on the street. However, she added that solving the issue of homelessness within the city will require collaboration from various organizations, as well as local, and state government officials.

A Burrito Stand Takes a Stand

He initially decided to set up in Santee Alley, an area in Downtown Los Angeles where vendors sell a variety of merchandise and food.

“I had no idea what the hell I was doing. I just picked a random spot,” he said.

Mestevanus told The Click that he encountered a homeless man who went by the name of Seven, who aided him in making his first day on the job a success. Seven informed him that the initial spot he chose wasn’t a great place to attract customers and helped him move all of his equipment to a new location that’s a block away from the Staples Center.

Low_Key Burritos has been a success for Mestevanus since then, and he gives back to the community when he can.

“I did this event with a lady who gives food out to the homeless people in Long Beach and areas around there. I donated like 30 or 40 burritos,” Mestevanus said. “I would notice that homeless people would ask people close to them for money for food, so I would tell them to go to a certain area and after that, I would bring them food.”

Mestevanus also helps out the community by donating personal belongings.

While out during a cold night in Los Angeles, he encountered a homeless woman who was using a black and yellow storage box from Home Depot for warmth. Instead of just walking past her, he gave her a jacket to keep warm.

“I just got a custom hoodie with the logo on it, made for me and I was just like, take this,” he said.

Other major nonprofits are trying to help deal with this crisis. Shelter Partnership contributes to resolving homelessness by providing support and resources to groups that work directly with homeless people.

The nonprofit organization has been in operation since 1985 and has continued to expand the number of community groups they work with.

According to Jan Perry, the interim executive director, the group provides support to over 300 organizations countywide by providing nonperishable goods for organizations that serve people who are homeless in many different areas.

“We provide almost anything you can imagine for somebody who is serving people who are homeless or at risk of becoming homeless,” Perry said.

Shelter Partnership operates the S. Mark Taper Foundation Shelter Resource Bank, a donation center that gives out clothes, toiletries and other nonperishables that are usually donated from companies. Nonprofits that are partnered with them can distribute these items to the people they work with for free.

An organization can contact Shelter Partnership if they want to become a partner.

While these efforts do help people reclaim their lives, it’s not enough to completely eradicate the issue.

“There are more people than ever before on the streets not only at great risk of COVID, but at great risk because of fears over violence, not having a stable situation, and no services to enable people to work on their recovery,” Perry said.

The organization believes that homelessness can be solved from collaborations among other nonprofits, government agencies, and concerned citizens.

These groups and local businesses like Low_Key Burritos have taken it upon themselves to help resolve the homeless crisis in Downtown Los Angeles. They all mentioned the importance of partnerships in getting people the help they need.

“I think we are at a crossroads when we have to come together really to focus on solutions, and that is going to make a meaningful impact on the people in the streets,” Rios said. “Keep in mind that everyone has the same kind of inherent dignity and everyone deserves to have a home.” 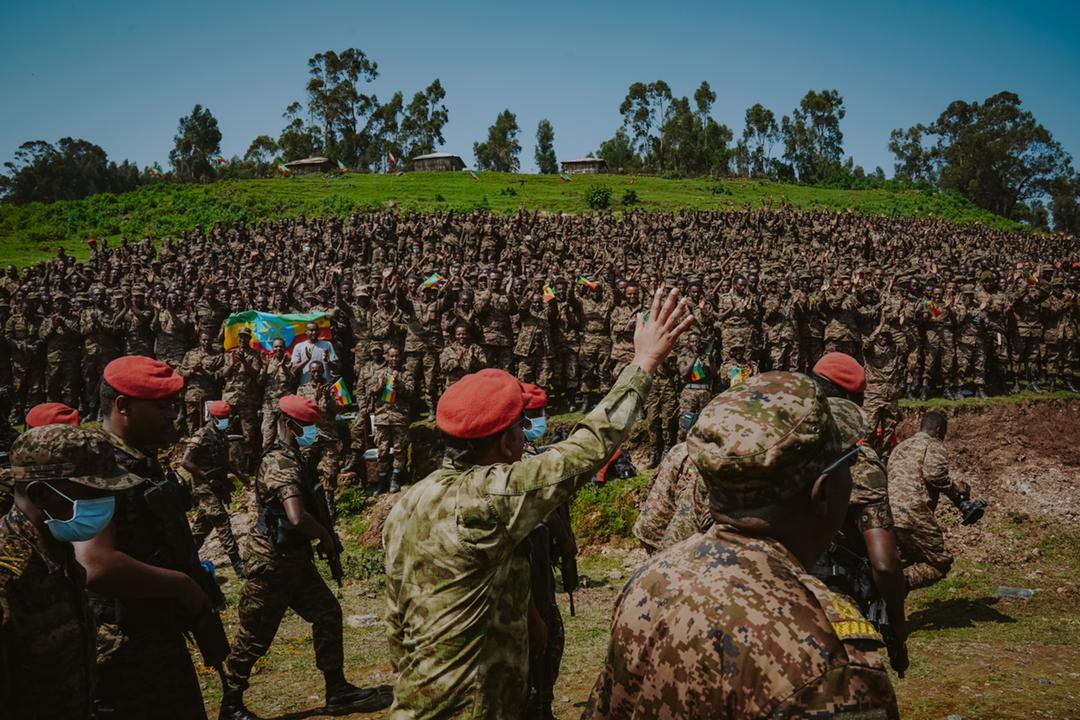 Competing Narratives are Deepening Ethiopia’s Division Amid a Civil War

For the last 14  months, Ethiopia has been in a brutal civil war. However, the government has been on the […]