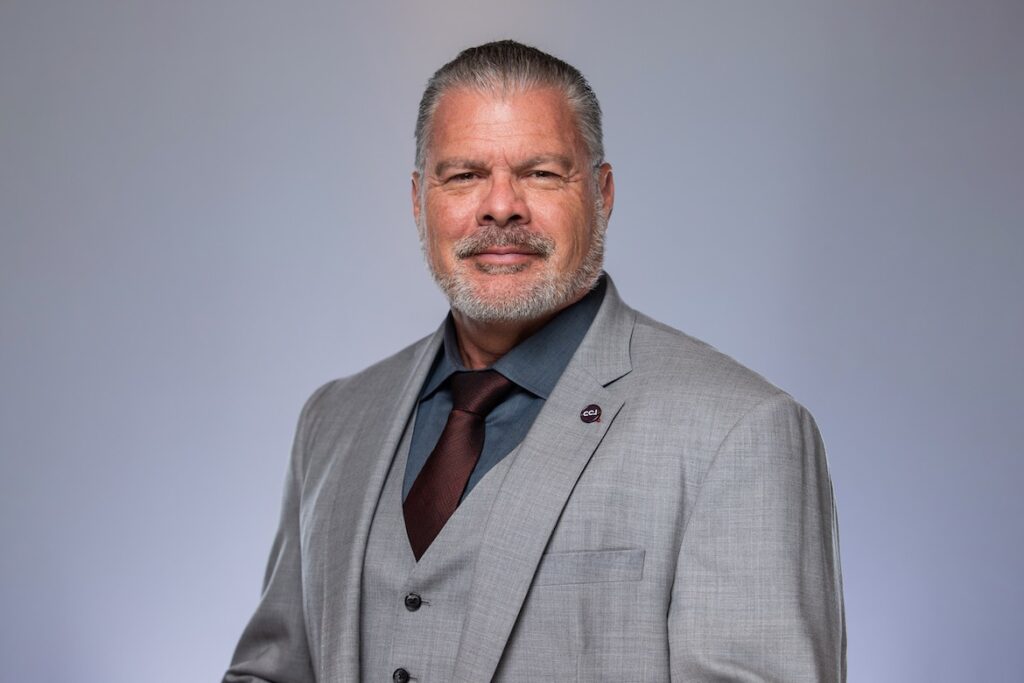 Ron Self is helping Veterans readjust into society [Credit: Ron Self]

(LOS ANGELES) — The black picket metal gate, usually the last defense to keep people in, glides open to let one out. Ron Self, a veteran of the U.S. Marine Corps and now formerly incarcerated, drives ahead, locking eyes with the khaki-clad armed correctional officers through his thin-framed glasses. The San Quentin sign and white cement guard tower drift away. In 2017, Self left his tumultuous old life behind and started again. His new mission: help incarcerated and formerly incarcerated veterans adapt to society outside prison walls.

“A lot of the guys never addressed their issues before they separated from the military, which is a lot of the reason why guys are in prison,” Self said. “My goal is to just help people have a more productive and fruitful life. Happy life … Before that innocence was taken away. I’d like to get guys back to that point.”

His life has a new purpose as the founder and CEO of Veterans Healing Veterans from the Inside Out, a non-profit that supports incarcerated veterans with the help they need to start over. He did have a purpose before, just muddled with bad choices and wrong turns. The intent to help others has always been there for Self, but he does not mince words when it comes to life choices and mistakes.

“I didn’t make a mistake. Accountable language. I made a poor choice,” said Self of his most consequential one. An egregious decision led him to 23 years locked behind frigid steel bars, hibernating from the rest of the world in some of the most unsympathetic prisons in the United States.

For Self, life before incarceration was an unsteady rollercoaster. His early life was turbulent, filled with unrecognized traumas that impacted the decisions that led him to years behind bars.

“You were a mistake. You’re the reason your mother and I are getting divorced,” Self’s father expressed to his belittled six-year-old son. That was the last time he saw his father, rising from his knees, hastily pulling his hand from his son’s shoulder, and walking out the door to the war in Vietnam.

Just weeks after his father left, his mother, in the throes of a traumatic yet not unexpected mental breakdown, stabbed the broken-hearted Self in the shoulder with a fork. He moved in with his grandparents after that. Within months, having felt he needed more structure in his life, his grandparents abruptly enrolled him into a military academy. This was his home, school, and vacation for most of his teenage years until he became a full-time Marine.

Self worked in special operations in the United States Marine Corps for ten years. He took part in periodic combat, a mission to save the daughter of a high-level member of the Clinton administration, and saved 15 men from a burning helicopter during a training mission in South Korea in 1989, for which he received the nation’s highest non-combat decoration, the Navy and Marine Corps Medal.

His life undeniably seemed structured, but the gut-wrenching loss of his Marine brothers, killing the ‘enemy,’ joined by his father’s sadistic and offensive words many years ago, had affected Self in ways he had never registered. His never-ending appetite to be more than “a mistake” and the post-traumatic stress he had suffered from combat steered him to a pseudo-father figure named Dr. Ronald Neufeld, a sniper rifle, and the back of a truck bed.

In 1994, Self was arrested and booked on suspicion of possessing a silencer, a silencer used in the 805 freeway shooting of a San Diego orthopedic surgeon, Dr. William Shoemaker. This wasn’t any everyday run-of-the-mill unexceptional shooting, it was an attempted hit. Dr. Ronald Neufeld, a former medical partner of  Shoemaker, enlisted the services and expertise of Self to kill his medical partner after taking out a $1 million life insurance policy on him.

“The two had been partners for three years but split a year ago over 1990 accusations by the Medical Board of California that Dr. Neufeld had been negligent and had performed incompetent surgery on six patients … Dr. Neufeld then sued Dr. Shoemaker, accusing him of failing to pay a $100,000 loan and stealing patients, workers and insurance contacts. Dr. Shoemaker countersued, then the shooting occurred,” the New York Times reported in 1994.

According to Self, Neufeld had been plotting to kill Shoemaker and two other doctors sometime before the two met. Self had been searching for a place to live with his girlfriend and came upon an unoccupied guest house belonging to Neufeld and his wife in La Jolla, California. Within moments, Neufeld, part of the San Diego Crime Commission, recognized Self from specialized training on breaching technique at Range 130 in Camp Pendleton, something Self had expertise in and helped facilitate.

After the incident, witnesses told police they saw shots fired from the bed of a pickup truck in front of Dr. Shoemaker’s car, piercing bullet holes through the windshield, fragments wounding Shoemaker in his shoulder and his wrist.

“I aim to the bottom right corner of the windshield. Shot once. Seven seconds went by. Shot again. Put another round through the same hole, basically. And then we left the freeway,” Self said.

The police later traced the abandoned pickup truck back to Self as a disoriented Shoemaker recovered in the hospital. Fearing the inevitable sentence with a possible touch of remorse, Neufeld took his own life. Self was arrested, charged, and sentenced.

He journeyed from prison to prison for years and fought hard to stay away from San Quentin, but his desires were not prosperous like in his past. Self began navigating his new home, nicknamed “The Arena.” Self started going to self-help classes, learned the ins and outs of empathy and compassion, and concluded that he was bred to be a warrior with sociopathic behavior. “Going to prison was probably the best thing that ever happened to me in that I was forced to stop and look at myself.”

Life began to turn around for Self, even though he was behind bars. But with this self-realization and the trauma he suffered in his youth and adulthood, and the trauma he had given rise to in Shoemaker, he doubted his life’s value.

On Nov. 9, 2011, Self walked into his godforsaken cell, stepped up on his toilet, wrapped a rope he fashioned from his sheets around his neck, and stepped off into the inevitable.

An hour and a half later, he awoke on the cold, damp concrete floor. Self felt shame for having tried and also having failed. As he sat alone in his cell, his introspection concluded that this was not a mistake nor he. Veteran Healing Veterans was born.

“When I hung myself, and the rope broke, and I woke up, I came up with the idea then … What we need is a program for veterans that goes deeper than any program in the prison system as far as self-help. So, I created one,” Self said.

In 2012, the Veterans Administration released a report stating that veteran and military suicide had outpaced combat deaths in Afghanistan. Having just attempted to take his own life, Self was shocked that more was not being done to help incarcerated veterans in the United States.

There were 6,261 veteran suicide deaths in 2019. Since Sept. 11, 2001, just over 30,000 veterans have died by suicide, four times more than the number of U.S. military personnel who died in combat in Iraq and Afghanistan. Additionally, in the 34 prisons in California, there are roughly 7,000 incarcerated veterans.

Self gathered knowledge from his Ph.D. in behavioral studies he received from Quantico while in the Marines and all he was taught in the self-help programs. He approached clinicians and the California Department of Corrections and Rehabilitation (CDCR) about the Veterans Healing Veterans idea. The CDCR was reluctant and limited his program to education courses on trauma and PTSD. Still, after seeing its impact on incarcerated veterans, they gave their approval to extend it further into clinical work.

In October 2017, Self was released from San Quentin State Prison. He had many open roads he could choose to go down, but his dedication to serving incarcerated and formerly incarcerated veterans was now Self’s identity.

“My focus is all veterans, the veteran community. The impact I want to make is to help guys figure out how and why they made the decisions that sent them to prison. A lot of the guys never addressed their issues before they separated from the military, which is a lot of the reason why guys are in prison.”

On Memorial Day 2021, after a year of working with the CDCR, the two organizations opened the first Veterans Hub at the Correctional Training Facility in Soledad, California, that offers rehabilitation programs and services for eligible incarcerated veterans.

“We strive to reinvigorate those characteristics by reminding the men of their past accomplishments,” CTF Warden Craig Koenig said in a press release from the CDCR. “The program is not just about access to the men by outside stakeholders interested in giving the men their veteran benefits, which is incredibly important. We are striving to give the men back their lives.”

Self said the CDCR agreed to his proposal to divide the nearly 7,000 veterans amongst three veteran hubs within the California prison system: a northern, a central, and a southern hub. The Veterans Administration will be on-site five days a week, preparing the incarcerated veterans with compensation exams and adjustments to society. The pandemic slowed the transfer of incarcerated veterans, but Self plans to have an eventual 1,000 in that hub.

In March 2022, Self was asked to serve on the Veterans Justice Commission, a Council on Criminal Justice (CCJ) organization composed of senior military, former military, and criminal justice leaders. The commission will create evidence-based reforms to enhance safety, health, and justice for men and women who have served in the military.

Self doesn’t ever want people to forget what he did to Shoemaker. It changed so many lives, including his. If anything, the complex man with a labyrinth of a past wants people to learn from his poor choice.

He felt he was getting in the way of his own relationship with himself.

“I wasn’t allowing myself to receive the love that was being offered to me. Because I didn’t forgive myself for the things that I’ve done. And, the reality is, I am worthy and deserve to be loved.”