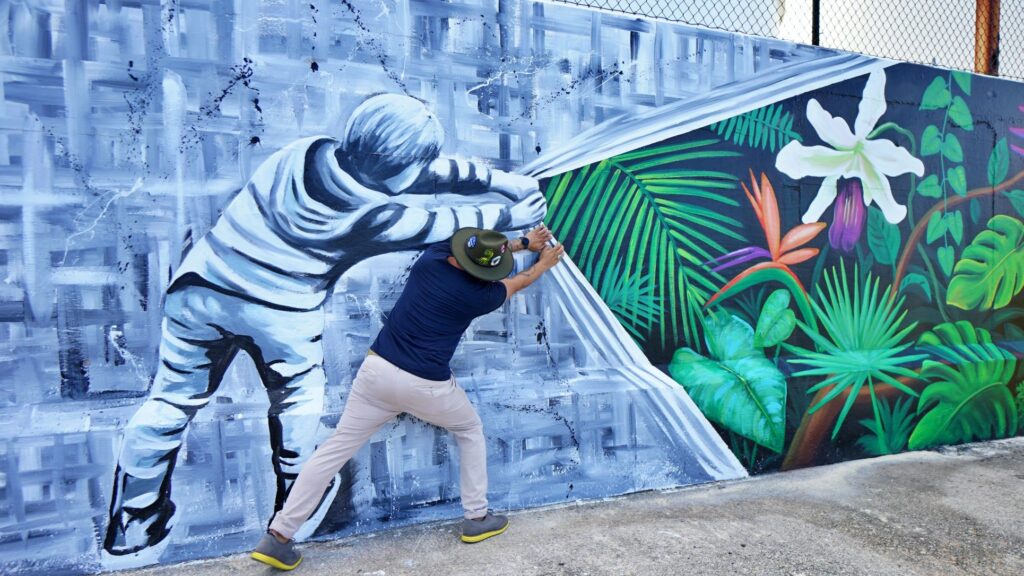 Carlos V. Garcia reenacts the scene in his mural to portray the unveiling of the city revealing its first layer of beauty. [Credit: Jose Hernandez Allen]

(GEORGE TOWN, Cayman Islands)— If you’re an American who believes that a small island town offers only warm, tropical weather and white sandy beaches for vacation, you’re in for a treat. Mural art is slowly transforming this island town, showing that there is more to this seemingly ordinary paradise.

Since a decade ago, murals have become a new type of art to coat the streets of George Town. A few walls of the commercial district have emerged as a canvas covered with impenetrable patterns of lush vegetation, native flowers, and creatures of the Cayman Islands.

At first, it was only a few walls, but within a few years, George Town experienced an explosion of vibrant colors, meticulously applied to create captivating murals on the walls of its streets and local businesses. It was like nothing the locals and tourists had ever seen. Some perceived it to be magical, because of the grandeur of the scenery. George Town began to experience artistic transformation.

“Ten years ago, was the first time I saw a mural in the town, and I was amazed at the artwork of the artists,” said Curtis Mason, a local  business owner. “Considering the influx of nationalities, it may be a way to preserve some of the history, as well as offer exposure to local talent.”

The town has changed much over the years.  In the early 1950s, George Town featured one main road approximately 30 miles long, According to the “Colonial Reports Cayman Islands 1953-1954,” produced by the Cayman Islands National Archive. 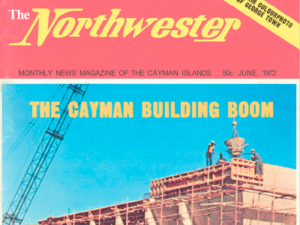 The roads were poor; surfaced with a mixture of limestones, marl and coral sand. It was ideal for labor occupations that relied heavily on skills for manufacturing, agriculture, fishing, construction, and predominantly seafaring.

The town itself varied little in appearance. Most walls were beige or yellowish—many stripped of their paint from hurricanes—longing for a fresh coat of paint.

The Cayman building boom in the early 1970s brought change followed by the official opening of the George Town Port on July 16, 1977. Concrete buildings were erected, surrounded by a ring of walls. These walls soon came alive with a fresh lick of paint. The town was on its way to becoming a colorful city. 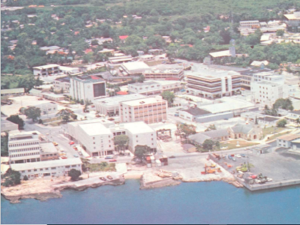 The George Town commercial district in 1977, at the launch of the George Town port project. [Credit: Cayman Islands Government, Ref.#8385]

Some 50 years later, a new occupation came to the town. The job description relied on a set of God-given prowess: no fear of heights, gifted hands, a wide imagination, and the ability to paint and draw on walls. This was the type of expertise that artists Lorna Reid, Carlos Garcia and  Kerwin G. Ebanks brought to the town.

Reid is a board member of the Cayman National Cultural Foundation and a former board member of the National Gallery Cayman Islands, who believes that murals as a form of public art have given local artists of color a seat at the table. She told the Click that when she joined her first visual arts community in the 1980s, there were few artists of color. “When you go to an art scene, you would generally see lighter skin people because those are the people who tend to buy the work,” she said. “However[presently], there are more local artists of color exhibiting and expressing themselves artistically.”

She believes that mural art is a public expression and cultural identity for the town. “Mural gives people a voice,” she said. “Mural is a voice of the people, but it is also a voice calling out to the people.”  Reid said, “What we[the town] are is something static, but what we can be is always growing.”

Reid believes that the walls are a canvas for this type of expression, and she commended her colleagues at the Cayman National Cultural Foundation for their active role to support art, especially in the Art Your Part  mural art, charity competition.

Time for a fresh coat of murals

In Feb., Garcia and Ebanks got their chance to be the voice of the town through their murals, when they received an invitation to participate in “Art Your Part,” on the property walls of the petroleum company, Rubis Cayman Islands.   They are two of four finalists vying for the best mural art in May.

From left to right, he begins his multi-part mural with some of the island’s native stars: the stingrays and sea turtles. They are coated in turquoise, yellow, and black and surrounded by an expanse of water amidst dancing corals. Next, to help his audience better understand the island, he presents a curious Caymanian boy, looking through black binoculars. The lens of the binoculars illustrates a contrast: a black and white picture of seamen at sea fishing turtles for food in one lens;  a colorful scene of a palm tree overlooking the Cayman’s turquoise sea in the other. Finally, he adds a portrait of a child’s torso, with his hands holding a red apple.

“This was my chance to paint something really big and help the street art industry grow,” said Garcia.

He envisions tourists walking down an avenue in George Town and being surprised by the murals they see. “You walk, you learn, you ask questions, and take pictures,” said Garcia. “It would be a nice background for movie scenes and other international entertainment.”

Ebanks is the voice for Alex Panton Foundation, a non-profit organization that raises awareness about mental illness in children and provides support for their families. He sees this as another opportunity to continue this dialogue of being the best steward for the next generation.

“Art doesn’t belong in a gallery, it belongs to the people, in the spaces people inhabit,” said Ebanks, paraphrasing a lesson he learned from Keith Ervin, a noted American mural artist.

Kerwin Ebanks’s mural is a reminder that there are numerous places of solace when we are faced with challenges to our well-being and we must embrace the wonders of nature. [Credit: Out of the Blu Marketing, Rubis “Art Your Part”]

“We[muralists] spoke at length on the site to try to develop a community of artists in order to expand our vision for the walls, not only in private properties but on government spaces,” said Ebanks.

The discussion helped them identify ‘unity’ as an integral step towards full transformation. “The difficult part is getting together with all the artists,” said Garcia.

“One of the biggest problems in the town is getting permission to draw on public spaces. International muralists are more prone to getting access to these spaces,”  Ebanks explained. “We need to get some traction with the government, and the best way to do that is to band together and see if we can make some noise.”

The murals done by artists outside of the Cayman Islands only scratch the surface, in Ebanks’ view. He believes that a deeper message could be represented about the community’s culture.

“We need to illustrate our history and heritage, and not just something pretty,” he said. “We have the sun and beach, but tourists today are looking for a cultural experience because they are trying to get a sense of where they are.”

In working with other artists, Garcia realized that the community mural competition had a greater purpose: to unite and lead local mural artists toward a common goal. The competition encouraged the muralists to work towards forming a united artist community.

Despite the daunting feet of the walls they may face, the muralists are determined to show how murals can transform George Town, and the community looks forward to its completed transformation.

“It’s no secret murals make our neighborhood beautiful, and they add color to building walls and streets that would otherwise go unnoticed, which is a treat for locals and tourists alike,” said Glendon Fennell, a fund accountant at Citco Funds Services who has worked in the prime vicinity of George Town murals for the last 15 years. “The new murals attract new local businesses, helping bring customers to pre-existing locations and boost the economy in the area,” he said.