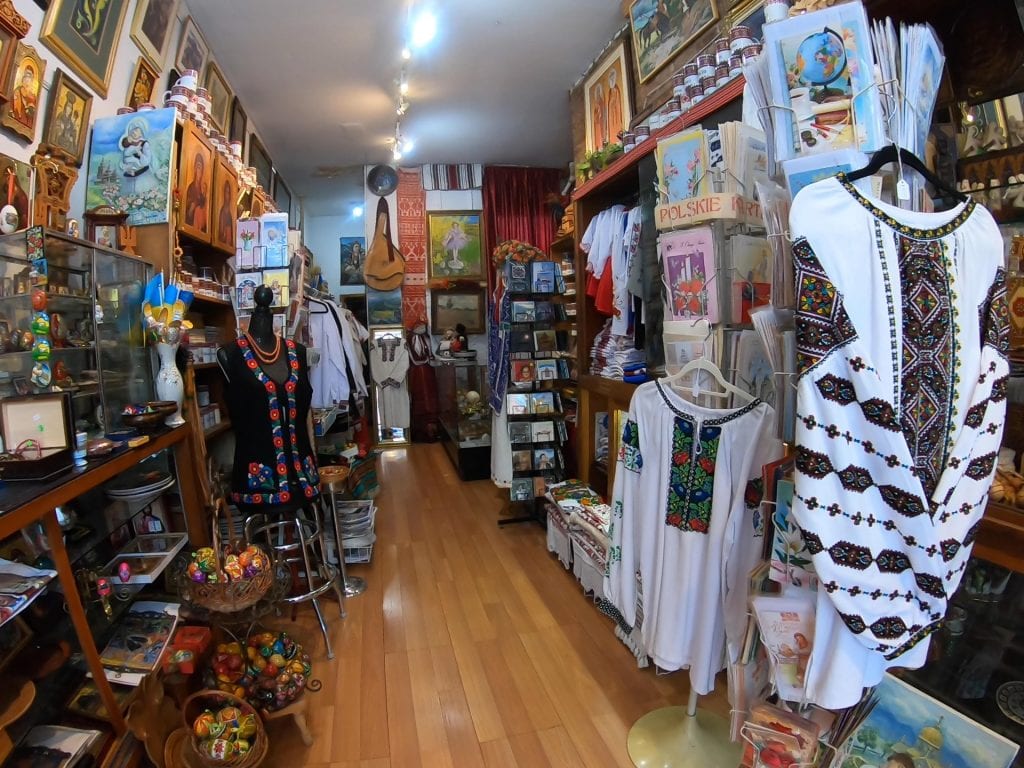 (NEW YORK) – Manhattan’s East Village vintage shops, eclectic restaurants, and colorful walkup townhouses make it a neighborhood unlike any other. Its unique culture is thanks not only to its famous bohemians, punk rockers, and artists, but also to the waves of immigrants, many from Eastern Europe, who have come and gone through its gritty streets.

Gentrification has caused many of these groups, such as the Ukrainian community, to close their businesses and abandon their East Village roots. But one Ukrainian gift shop, Arka, has been stern on keeping its doors open to keep the Ukrainian spirit alive in the neighborhood.

Arka opened its doors in 1951 on 7th Street between 1st and 2nd Avenue. The owners were Roman Porytko and Jaroslav Pastushenko, two immigrants from Ukraine who were able to start a new life in the United States under the Displaced Persons Act of 1948, which allowed Europeans who had lost their homes in World War II permanent residence in the U.S. Around 85,000 Ukrainians found their way to the U.S. to start a new life, escaping Soviet oppression and Nazi Germany. Many of these Ukrainians settled in Manhattan’s East Village.

Together, this community steadily built itself a Ukrainian village over two decades while living alongside the hippies, bohemians, and artists. Lead Ramones vocalist, Joey Ramone, would be seen munching on pierogies at Ukrainian restaurant Veselka while other Ukrainian businesses flourished — from seamstresses, a barber, travel agencies, shoe stores, law offices, restaurants, and of course cultural stores such as Arka, Echo, and Surma.

“Arka was also a meeting place for the new Ukrainian immigrants,” Bohdanna Slysh says. Olga Gnoj adds that “it wasn’t just a store, it was a Ukrainian cultural center.” At the store, you would hear about news in Ukraine, learn about job opportunities, politics, and the gossip around the neighborhood all while feeling like you were in your grandmother’s home in Ukraine with all of the decorational items in the store. Owners Porytko and Pastushenko were connected to all of the local Ukrainian organizations. “If you came to New York and you didn’t know anybody when you arrived from Europe as an immigrant or whether you’re a visitor from any other state, this [Arka] would be like an introduction to the Ukrainian community in New York,” explains Wolodymyr Starosolsky, a customer of Arka for 50 years.

And if you were a babushka looking for that special DMC thread for your embroidery that wouldn’t lose its color when washed, Arka made sure to always keep its thread inventory stocked. It’s walls were covered with paintings, wood carvings, icons, and banduras, a Ukrainian folk wooden instrument. Bowls of pysanky (decorated Easter eggs) were displayed along with colorful embroidered shirts, rushnyks (embroidered cloths), beaded necklaces called gerdans, and Ukrainian CDs.

In the 1980s, the East Village continued to flourish and grow, which resulted in steep rent increases. In 1985 Arka was hit with a 1000 percent rent increase from $300 per month to $3,000 per month and announced that after 35 years, they were going to close their doors. Signs announcing their closure were placed on each of the three large windows of the ground-level store. “I happened to be walking by the Seventh Street shop one day in December of last year when a sign in Arka’s window caught my eye,” explained business entrepreneur Mykola Drobenko to the Ukrainian Weekly in 1986. A few days later, Drobenko returned with an offer to buy the business. The original owner, Pastushenko, told the Ukrainian Weekly, “There was no question in my mind that he was the right person to maintain the business and to service Arka’s established clientele.” After buying Arka, Drobenko moved the store to the first floor of a building that he owned on 2nd Street, just five blocks south of the original location.

While many Ukrainian businesses have closed over the past few years including gift shop Surma and butcher Kurowycky Meat Products Inc., and the Ukrainian population in the neighborhood has been continuously decreasing, Arka has survived many waves of gentrification in its East Village home, and this is due to owner Mykola Drobenko’s devotion to his family’s heritage. Today, the store is run by Mykola’s son Nicholas, Nicholas’ wife, and his sister-in-law Maria.

“They [the Drobenko family] are trying to keep that name alive. They have a patriotic vein running through them,” said Starosolsky. The store is a symbol of the Ukrainian community — although it is small, on the inside it is still overfilled with dedication and love to the Ukrainian culture. The store still sells the same items it has stocked for decades.

Their most popular item today is their bright floral scarves, perhaps due to the pattern’s popularity on today’s fashion runways. Arka also launched their online store, which accounts for 20 percent of their sales and allows for an international clientele. But they still have regulars who come every week and others who simply walk in because something caught their eye.

Arka, however, has been struggling to stay relevant and alive in the East Village with the exponential increases in cost over the years, explains Drobenko. “If we did not own the building where the store is located, we would definitely not be in business till today.” Today, a 700 square foot space the size of Arka would run between $10,000 and $15,000 per month in rent in the neighborhood.

“It’s the last of the last. That’s it. Without this store, I don’t know what Ukrainians are going to do. If you look on 2nd Avenue there used to be all Ukrainian stores and on 1st Avenue. Now not so much. There are a lot of changes,” adds Maria Drobenko.

Gnoj and Slysh explain that physically, the East Village has improved drastically from when they first moved to New York in the 1950s. The streets are lined with trees, flowers are planted, and the neighborhood is safer.

On the other hand, they are saddened that their community is shrinking. They still want to keep their culture alive in the neighborhood and educate others about their heritage, especially today with the war in Eastern Ukraine against pro-Russian rebels.

Many Ukrainians have moved out of the East Village due to drastic rent increases, gentrification, and their professions. “It’s no longer what it used to be,” says Starosolsky.

As for the future of Arka, Drobenko says that there isn’t a new generation to take over the store. He hopes that someone who is equally passionate about their Eastern European heritage will come around to continue Arka’s legacy.

Drobenko understands the importance and need to keep Arka’s doors open for his community. “It is very significant for us to keep Ukrainian and Eastern European tradition and history alive, especially in a city that is changing and moving forward ever so quickly. We want people to be able to have a place where they can come and learn about the rich history, culture, heritage, and livelihood of our ancestors through traditional garb, folk art, jewelry, woodwork, paintings, antiques, etc, especially with the ongoing turmoil in Ukraine.” Despite the challenges, if history is any guide, Arka will keep the Ukranian spirit alive in the East Village for many years to come.