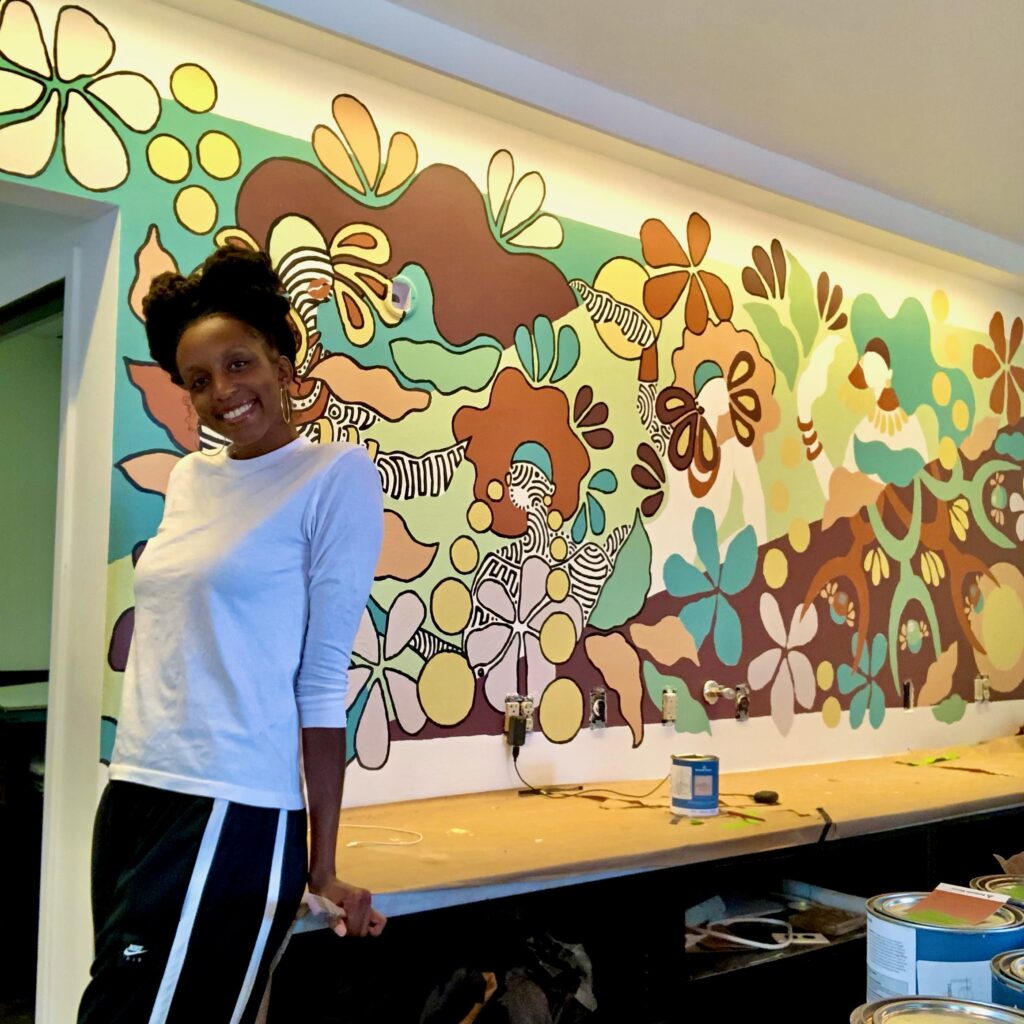 (COLUMBIA, Md.) — Melanie Royster launched her first business, an online store that sells original art, while living at home with her parents. It was April 2020, just weeks after the World Health Organization declared a global pandemic. As people panicked and the world went into lockdown, Royster decided she would try something new. She would open an Etsy store.

“I felt like there was just a lot of heaviness in the air and everybody could feel it,” Royster said. “So, I created my Etsy shop as a way to create things that would bring joy to people.”

A visual artist who studied interior design at Virginia Commonwealth University, Royster said she got up at 1 a.m. one morning and began uploading images of prints she intended to sell, determined to grow this abstract idea into a viable business.

“My biggest priority was trying to make as many sales as possible,” she said.

At first, the store yielded between $100 and $300 a month in revenue from sales of her artwork.

Gradually, the store attracted a steady base of customers and her earnings grew from a few hundred dollars to between $500 and $1,000 a month. During this time, Royster said she also started to attend pop-up events and began painting murals and designing banners.

She hoped to evolve her business into something more than just mass-producing art — she wanted her work to have a deeper meaning.

“Community is just really important to me and so is bringing people together,” Royster said.

Today, most of her earnings come from commissioned work that she said is aligned with her goals to advocate for social justice causes such as women’s rights. She also said she is involved in a variety of community art projects meant to preserve the history and culture of a region that is rapidly changing due to gentrification.

During the pandemic, the crafts industry exploded. Entrepreneurs across the country flocked to sites such as Etsy, according to Abby Glassenberg, the co-founder and president of the Craft Industry Alliance, a trade association for creative business owners.

“So many people were sheltering at home and had a lot of spare time to pursue some things that maybe they had put on the backburner,” she explained.

But finding success often comes with its own set of unique challenges.

“It can be lonely to be working by yourself and not really have anybody in your local community who totally gets what it is to manage inventory and to understand the sophisticated shipping processes,” Glassenberg said. “There’s a lot there.”

Royster closed her Etsy store around May, opting to grow her business on a new platform that is focused on larger-scale custom art projects with a clear social impact. Generally, the cost of each project ranges between $2,000 and $3,000.

Laura Bacon, the founder and CEO of The 3rd Inc., a community co-working space for entrepreneurs who identify as women of color, commissioned Royster to paint a mural for her business.

“The minute I saw her art it just gave me the right feeling, the right energy,” she said. “Then, when I spoke with her, I realized that she wasn’t just doing art.”

Recently completed, the mural is a sophisticated re-interpretation of the “people’s tree,” a popular statue and symbol in Columbia, Maryland.

“She re-imagined it and reinvented it, where the people coming out of the tree are clearly women of color,” Bacon said. “It’s very, very impressive.”

Royster said that she has a clear vision for the future expansion of her business, which will focus on projects that fulfill a deeper desire to do good for her community.

“It’s cool to be able to sell things and have beautiful items out there,” Royster said. “But when I’m serving the community that’s going around me with my talents and whatever gift God and the universe have given me, that’s what makes me feel good.”