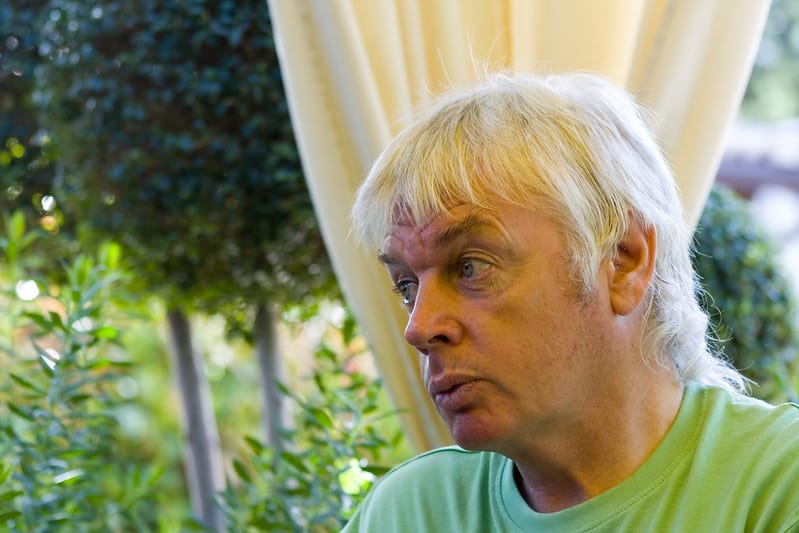 How Far Are ‘Lizard People’ from the White House?

David Icke, an English conspiracy theorist, is the chief proponent of the idea that reptilians in human skin control humanity. Credit: Flickr, via Creative Commons.

Around 1991, former sports broadcaster David Icke was invited onto the BBC talk show “Wogan,” where he proclaimed to a giggling audience that he was the son of God.

By the end of the decade, he developed his signature hypothesis: shapeshifting reptilians control the world, masquerading as our trusted political leaders. Over time, he expanded his conception of this grand conspiracy to encompass all of human history and the breadth of the Solar System. He’s built a business around it, writing books and selling out public talks around the world for years.

Icke’s bizarre beliefs are certainly not of this world, but his popularity among fringe thinkers has helped him earn the respect of his peers—most notably, paranoid firebrand Alex Jones. Icke once joined Jones for an interview on far-right fabricator InfoWars, where he was free to speculate and seethe to his heart’s content. But another Jones guest also appears to trust the judgement of the InfoWars host: President Trump.

Trump’s direct relationship with InfoWars, and proximity to people like Icke, is no secret. The president is notorious for using his powerful voice as a vehicle for fringe ideas to reach a mainstream audience. And the skeptics out there have been grateful.

“I’ll tell you it is surreal to talk about issues here on air and then word-for-word hear Trump say it two days later,” said Jones in 2016. “It is amazing. And it just shows how dialed-in this guy is and that’s why they’re so scared of him.”

Trump’s rhetoric is steeped in conspiracy theory allusions. Most recently, it only took three days for the president to suggest that the House’s impeachment inquiry was predicated on a hoax.

“Sounding more and more like the so-called Whistleblower isn’t a Whistleblower at all,” Trump tweeted on Sept. 27. He mused that the whistleblower, whose complaint fueled the impeachment inquiry, may have received inaccurate information by “a leaker or spy, feeding it to him or her.” Perhaps, he wondered, “a partisan operative?”

Trump’s baseless insinuation of insidious scheming by the Democratic Party is a well-worn defensive tactic, but it’s hardly the most shocking of his professed beliefs. In his United Nations speech on Sept. 24, he decried the “globalists” attempting to hijack America’s future, using a term rooted in anti-Semitic conspiracy theories. As a candidate, he spread a tabloid-fueled accusation that the father of Sen. Ted Cruz, R-Texas, helped to assassinate John F. Kennedy. That’s not to mention his endorsement of the “birther” lie concerning Barack Obama, which alleged that the 44th president was not a U.S. citizen.

But does this mean that he could one day espouse a belief in reptilian overlords?

“Lizard people is a little more extreme, so I don’t think he’s going to go there,” said Joseph Uscinsci, an associate professor of political science at the University of Miami who specializes in the study of conspiracy theories. “But you do have small pockets of Trump supporters whose own beliefs go way beyond the president’s rhetoric, like the QAnon people.”

QAnon places Trump at the center of an elaborate conspiracy to overthrow the “deep state” and expose a Washington pedophile ring. In July, he invited online proponents of the conspiracy theory to the White House, as part of a “Social Media Summit.”

So why are these off-the-wall, harebrained concoctions—and the fringe theorists who purport them—so seductive to him?

“Conspiracy theories tend to be theories of evil and of illegitimate power,” said Jonathan Kay, author of “Among the Truthers,” in a 2017 CBC television segment. “And the whole basis of the Trump presidency is the idea that there are illegitimate elites who are running the world.”

While Trump and Icke may see eye-to-eye on the matter of “illegitimate elites,” Icke is no fan of the presidency.

“It’s like some Americans say, ‘Doesn’t matter who you vote for, the government still gets in,’” said Icke in a 2018 interview.