She goes by “Nany” and boasts 180k followers on Instagram. Image by Lindsay Rogers.

NEW YORK — I met Daniela Ramirez in 2013. We were interns together at Seventeen Magazine, a Hearst publication. What I remember most about her was how quiet she was. There were between 10-12 millennials in the fashion closet at all times, so quiet was nothing if not notable.

In hindsight, it’s ironic that this is how I remember Daniela, because she is far from quiet. ‘Nany’ is a lifestyle blogger, with an Instagram following of 181,000+, whom she interacts with daily. Her style is vibrant, and she doesn’t hesitate to weave her personal policies into the tapestry of her online platform. She is sprightly. And she is what is commonly known now as an influencer. Reaching out to her now, six years later, I feel more the part of a fan than a former colleague. 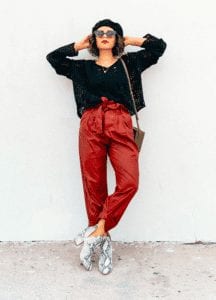 Daniela still incorporates her love for fashion into her blog. Image by Daniela Ramirez.

“I started out with a fashion blog in Spanish,” the Venezuelan native tells me. “At that moment, I remember thinking there weren’t any online outlets for Latinas. It was an anonymous website for a while, until personal style blogs started to appear and I thought it would be fun to show that you can have a versatile wardrobe without having a celebrity closet.”

Two years later, in 2011, she began expanding her readership by writing in English, which she considers the official conception of her blog as it has come to exist today: Nany’s Klozet. Daniela says this decision came pretty naturally, as she was living in a bilingual community at the time. Her blog still caters to a largely Hispanic audience today.

Now, a decade later, she has spent the most important years of her life – ones of self discovery, love, and loss – in front of a camera, filtered, and hashtagged.

In 2015, she wrote a “Wedding Series”, coupled with beautiful photos from her own nuptials. Contrastly, in 2017, she posted about having had a miscarriage and the subsequent heartbreak she endured. In 2018, her readers were elated to read her “Labor and Delivery” story, where she announced the birth of her first son, Nico.

Since having a baby (who has become a regular on her Instagram feed), her audience has expanded to include another group that Daniela had not previously anticipated – mothers. Because of this, she now considers herself more of a lifestyle blogger than the fashion blogger she was during our days at Seventeen. Though, it has not been the easiest transition.

“On the fashion side, there was pressure to always look perfect. You start to notice things you wouldn’t have otherwise, and feel like you have to keep up with all the new influencers,” Daniela says of being in the public eye.

“But it became harder when I had my baby because people have a lot of opinions on what’s right and wrong when having a family. Every little step is criticized, even though you are trying to be the best mom.”

Daniela is quick to point out that she never set out to be an internet personality.

“Slowly the terms have shifted to content creator and influencer, and that’s definitely an oversaturated market. But I believe that you don’t choose to become an influencer, it happens when you are good in your career.”

Does she think she’ll be creating content forever? It’s hard to say now, but having a family has definitely shifted her perspective. It’s what happens when Instagram influencers grow up. Sometimes things really are better with #nofilter.