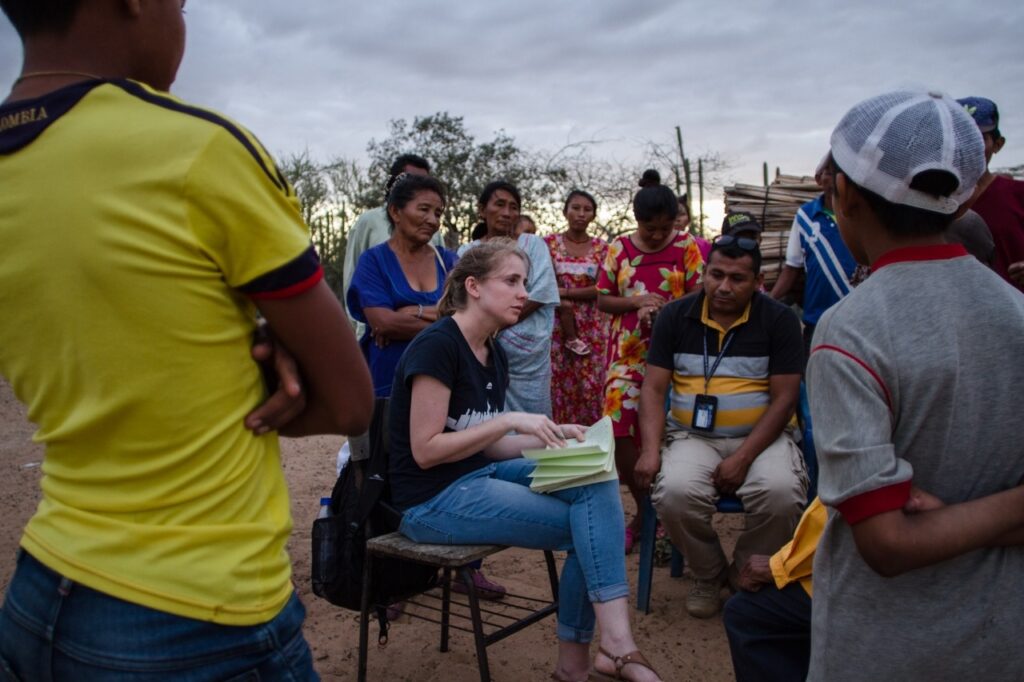 Rosenthal speaks with Wayuu community members about the lack of government assistance in their village of Lamanama, a rural community in La Guajira, Colombia. © Helkin René Díaz.

In August 2020, Hilary Rosenthal published a Human Rights Watch report and a multimedia piece that documented how the Wayuu, an indigenous group in Colombia and Venezuela face extreme malnutrition due to food and water insecurity and a limited healthcare system.

For example, according to the report, “The official death rate of children under 5 from malnutrition in La Guajira,” the northeastern Colombian state where many Wayuu live, “was nearly six times the national rate in 2019.” The report further documented how sick Wayuu children may not reach a distant hospital in time or become sick again when they return home.

Human Rights Watch is a global advocacy organization that, “Investigates and reports on abuses happening in all corners of the world” and “work[s] to protect the most at risk.” While HRW approaches each project with the goal of creating specific change, the organization is transparent about its mission and its reports are acts of journalism.

Rosenthal’s report—People of Resilience: Colombia’s Wayuu Indigenous Community Confronts a Malnutrition Crisis Amid Covid-19—reflects the hallmarks of robust journalism: a commitment to the truth, rigorous vetting, and corroboration to verify facts, and a desire to inform and engage the public.

For Rosenthal, that careful corroboration was key to success. “You’re not going to get anywhere if you make exaggerated or false claims,” she said, “if you are wrong that’s going to ruin your credibility, maybe forever.”

While Rosenthal approached her work with the goal of advocating for tangible change, the report is still journalism. When deciding how to allocate limited resources Rosenthal asked herself, “Where can we make the most change, which issues can we impact the most, which partners are the most willing [to collaborate]?”

Journalists make the same choices each time they decide which stories to cover, which sources to trust, and which information to prioritize. Every story presents questions of how to gain readers and hold their attention.

HRW might cross the line away from journalism if it obscured its mission. It does not. During her time at the organization, Rosenthal observed that HRW was, “Almost never implicit about what [it] wanted to happen” when publishing a report. Moreover, the organization’s website clearly explains its desire to create change and HRW refuses to accept government funding to help maintain its neutrality.

This transparency means that, like a journalist, HRW researchers can conduct their work in an even-handed manner. After all, a journalist’s goal is to inform the reader about specific events in a transparent manner. Having an opinion does not disqualify a journalist from covering a  particular topic, so long as they make their views clear to the reader. So too with HRW.

As Rosenthal explained, “I want people to come away with something different than what they thought before,”—that is what good journalism is all about.