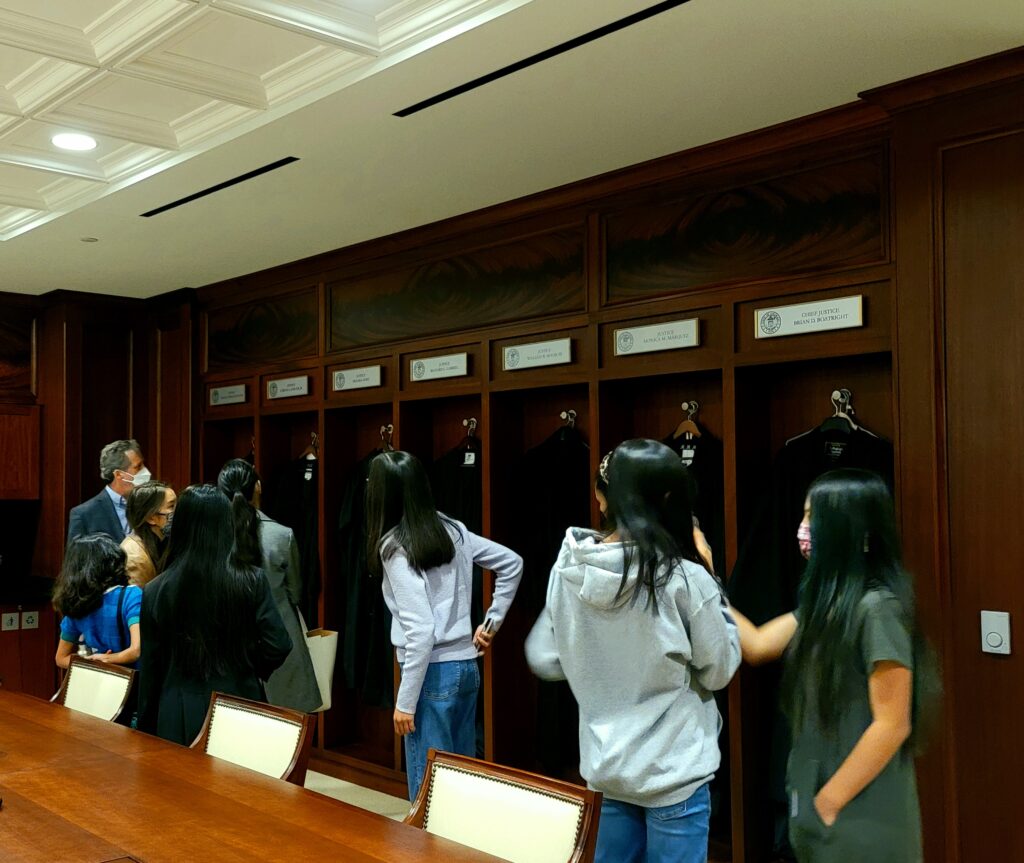 Checking out the robing room at an AGI visit to the Colorado Supreme Court. [Credit: Agnes Cheung]

‘I Was Adopted Into a White Family’: How an Asian Adoptee in Colorado Connects to Her Roots

(DENVER) 15-year-old Sasha from Denver is Asian, but she feels more connected to white people. “I was adopted into a white family. I don’t always connect with Asian people,” said the teen, who is going by a pseudonym for this article to protect her privacy as a minor.

Sasha is one of many international adoptees across America. International adoption, also called intercountry, transracial, or transnational adoption, happens when a family adopts a child from another country. These adoptees, including those from Asian countries, face complicated challenges growing up immersed in a culture different from their own. In Sasha’s case, even as her white family embraces cultural heritage and openly discusses her adoption, she finds that despite being fully Asian, she is not Asian enough around her Asian friends.

Dr. Amanda Baden, a psychologist specializing in international adoption issues and racial and cultural identity, calls this a “cultural racial limbo”. “She feels white and she is Chinese, but she doesn’t feel Chinese,” she said.

Data from the U.S. Department of State shows that since 1999 there have been more than 280,000 adoptions in the United States with approximately 30% of these adoptees from China, where Sasha is from.

Denver Public School District, where Sasha goes to school, is 4% Asian according to the National Center for Education Statistics. Sasha does not remember how old she was when she first realized that she was in the minority.

“But I did notice that I didn’t look like other people,” said Sasha. “I think I just tried to surround myself with more people that could relate to me just so I didn’t feel so alone, [rather] than [focus on] being Asian.”

According to 2020 data from the U.S. Census Bureau, only around 3.5% of the population in Colorado is Asian.

To connect with more Asians her age, Sasha attended the first pilot event with Asian Girls Ignite (AGI) in October 2020.  During the online event, Sasha heard from Mimi Le, a female software engineer, Sophia Moon, an artist, and Meghan Yen, a director of operations of an investment company.

AGI, based in Denver, Colorado, is a non-profit for Asian Americans and Pacific Islander (AAPI) girls and women. Participants focus on “elevating their voices, exploring their identities, and caring for their wellbeing,” through meeting with female role models.

At a recent AGI field trip to the Colorado Supreme Court in October 2021, Sasha was excited to see judges who looked like her and to hear their stories.

Joanne Liu, co-founder of AGI, organized the visit where participants toured the courthouse, the robing room and heard the personal stories and experiences of two female Asian American judges. Out of the 387 judges in Colorado, only eight of them identify as AAPI. 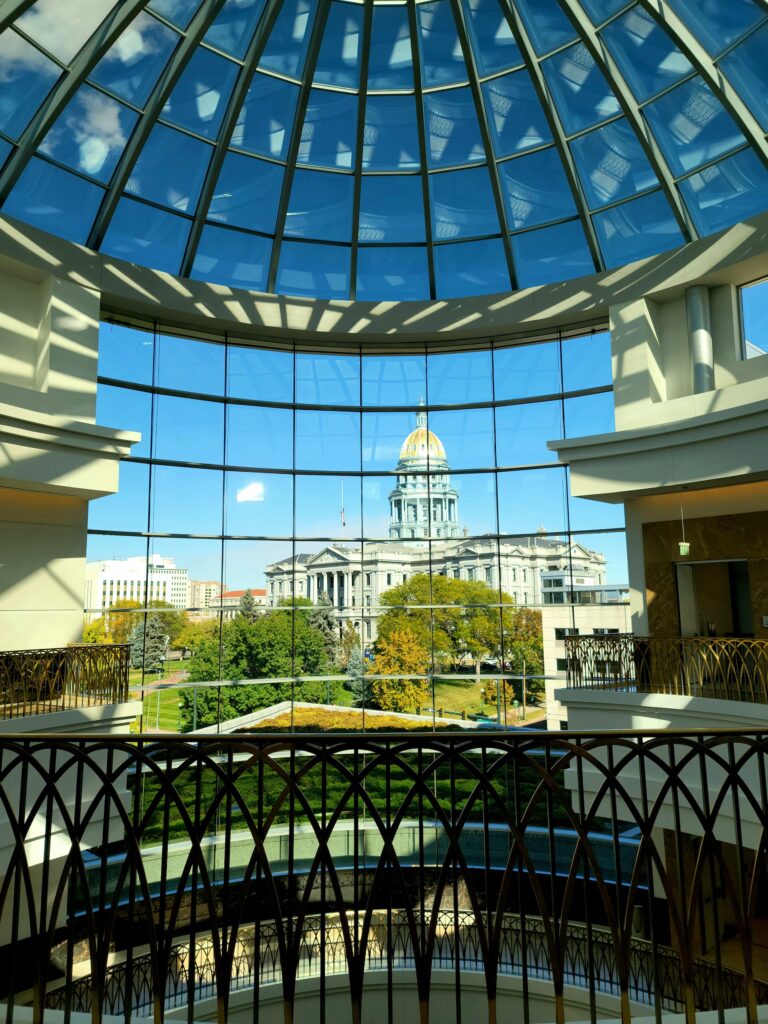 Click above for the photo gallery of the AGI visit to the Colorado Supreme Court. [Credit: Agnes Cheung]

At the courthouse, guest speaker Judge Sueanna Johnson told Sasha and seven other Asian girls that she was born in South Korea. She was adopted into an American family when she was three and she had been learning about Korean culture mostly through her daughter who is interested in Korean culture. 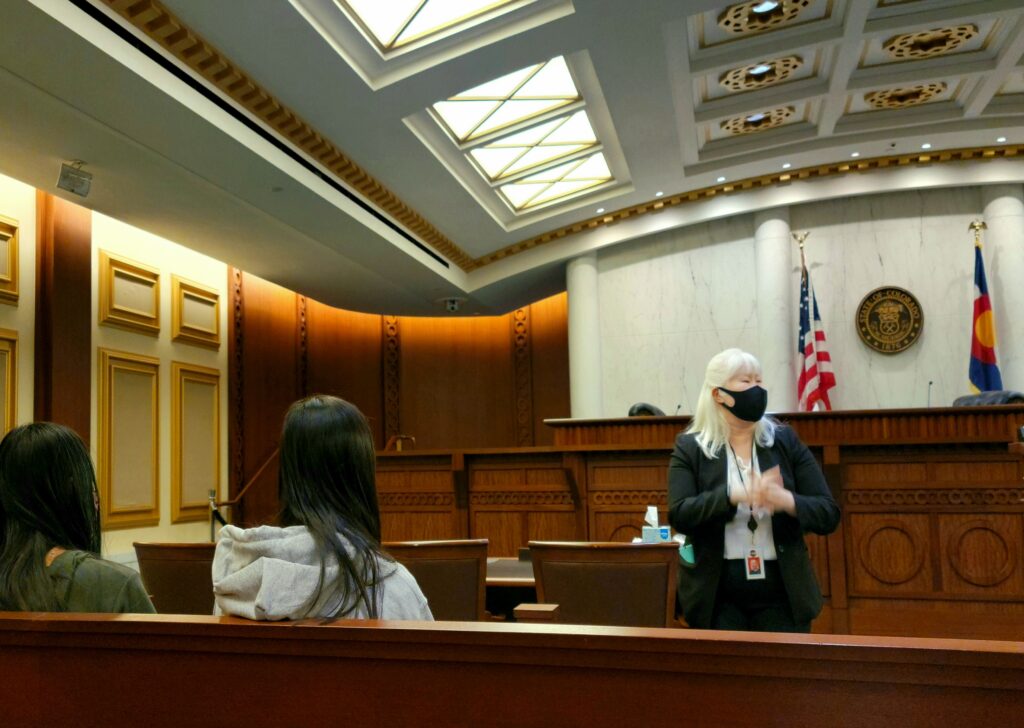 Sasha learned about Chinese culture through reading books with her mom, and by annual Chinese heritage summer camps. “When I was much younger, I remember that there were ‘heart talks’ where we would do specific adoption-related projects, crafts and cultural activities,” said Sasha.

Sasha’s mom, Nina, who is going by her first name in this article to protect Sasha’s privacy, began preparing for Sasha’s arrival many months before the adoption. She printed out binders full of information about Chinese culture and things to do when bringing a child home from another country.

“When Sasha turned three, we began attending mommy-and-me classes where we learned about Chinese culture,” said Nina. “We had a 3-foot-wide bookshelf full of books talking about China and Chinese adoption. It’s a whole genre of its own,” she said.

There is a romantic Chinese folklore about a red thread connecting lovers that has been adapted by the Chinese adoption community.  The story goes that there is a red thread that connects the hearts of mother and child, even though they are continents apart. It could be stretched but never be broken. Nina thought that it was a beautiful story.

Nina has struggled to find out more about Sasha’s birth situation from the orphanage. She does not think that even basic information such as Sasha’s birthday is accurate. Nina hired an agency to investigate the facts about Sasha’s birth. Eventually, she found out that some orphanages change the babies’ birthdays hoping that potential families would find the babies more attractive. Nina thought that it was cruel to have a fake birthday. She knows that it is a very unstable feeling for Sasha to not have basic truths such as when she was born. Sasha expresses a lot of sadness about that.

Over the recent Thanksgiving holiday, Nina had wanted to watch “Found” with Sasha, the recently released Netflix documentary about three Chinese adoptees who found out that they are related through DNA tests and their journey to China to learn about where they came from. It highlighted the disconnect, longing and dilemma that Asian adoptees face. Sasha started watching the documentary and realized that the orphanage was similar to where she was when she was a baby. She did not want to relive that and had to stop watching the show. She knew that the experiences of the three Chinese adoptees were similar to hers, and it hit too close to home.

“I’ll probably watch it, maybe when I am an adult.” said Sasha.

Back in the Colorado Supreme Court, another speaker, Judge Neeti Pawar, told the girls that she grew up in a small farming community in Central Western Illinois. Besides her family, not a lot of people looked like her.

Pawar said that it felt like she lived in two worlds – one during the week at school and at work surrounded by white people, and another one over the weekend where her parents would drive to the next town to gather with “my people” – other Indian families who looked like her.

“It is important to be comfortable living in the two worlds that we are in. Your uniqueness from being in two worlds is your superpower, “ she said. 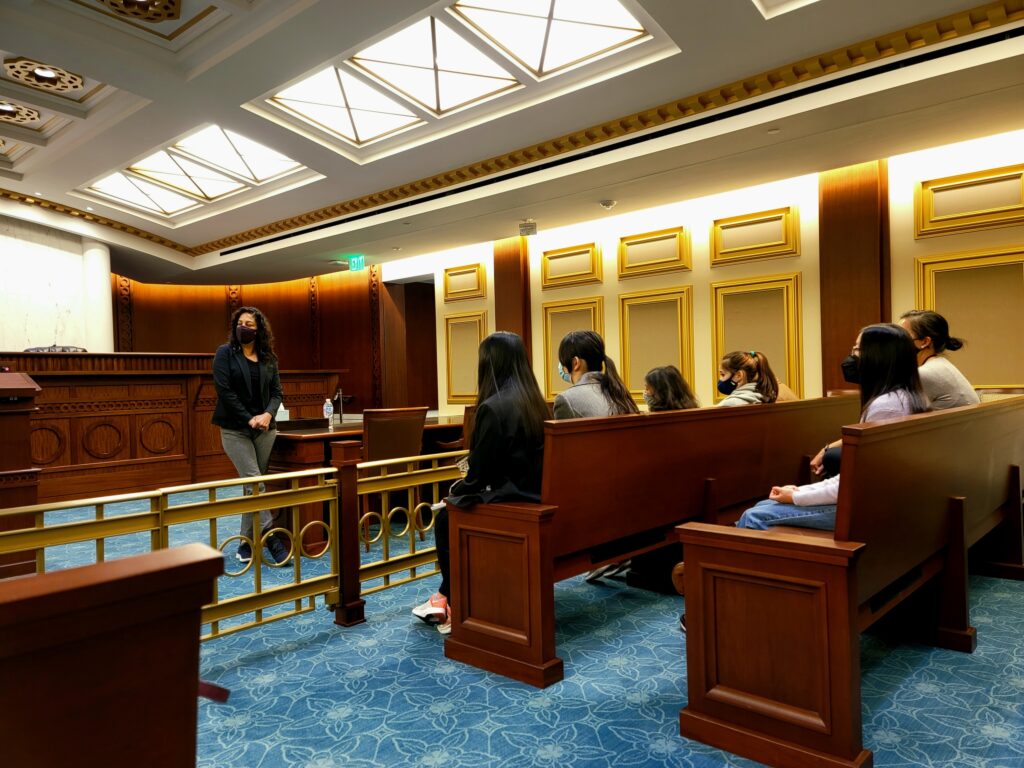 School curriculum can further make Asians feel like underrepresented minorities. Although Asians have been in the U.S. since the 1500s, at school, the history of Asians Americans is barely covered. The only mention of China that Sasha remembered was in sixth grade. “We talked a bit about the Great Wall of China,” she said. “But we never have [talked about] anything about Asia ever since.”

As a former assistant principal of a school in Denver, AGI’s Liu understands the feeling of invisibility. “At school, there is no acknowledgement of their [Asian American] background,” said Liu. “[People] that look like [me] aren’t talked about, aren’t celebrated. It’s almost like, do we even exist in history? Do I even exist in my school? Do they see me?”

In school, Sasha has a group of friends that are smart and funny, though she says none of them are Asian. They enjoy bubble tea and spend a lot of time on the phone together. They are forming a study group to support each other with schoolwork.

Sasha remembered one time when someone at school made fun of her eyes. Since then, no one has said anything further about her being different. “I think I blend in with the rest of the people, even though I look different,” she said.

While scrolling through Instagram in March this year, Sasha learned that a gunman had fatally shot eight people at three spas in the Atlanta area. Six of the murdered victims were Asian females. Asian identity, its underrepresentation and the discrimination faced by Asian communities suddenly became front and center on social media.

“It was really hard to see. I never really knew about Asian hate crimes before to that extent. It was surprising and hurtful to know that was happening,” she said.

In an article in Medium, six members of the Society of Adoptee Professionals of Color in Adoption (SAPCA) discussed why the Atlanta shooting was especially disturbing for Asian adoptee communities.

“Adoptees of color (transracial and not) often find themselves caught in between worlds, not White enough and not fill-in-the-blank enough. For those of us who are transnational adoptees, despite being raised in the U.S., our immigrant bodies signify foreign (among so many other things), which is why these murders of Asian immigrant women resonate so deeply for us.” 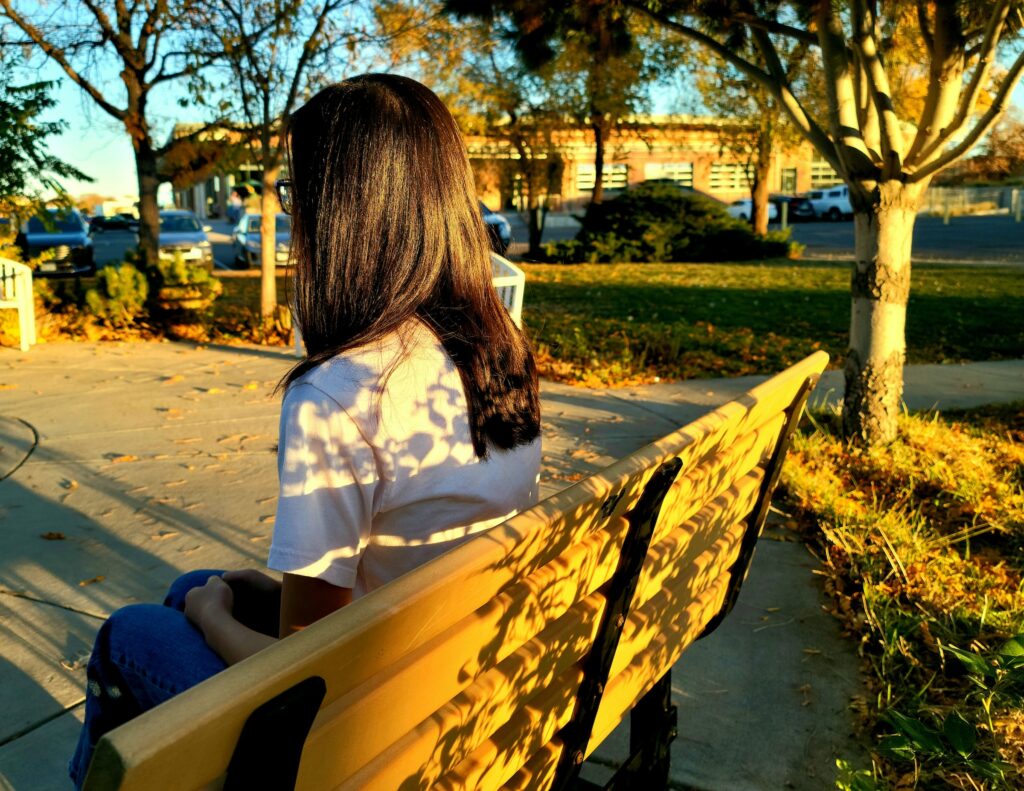 Sasha during her interview with The Click. [Credit: Agnes Cheung]

Sasha is interested in STEM and hopes to be in computer science.  “I want to be able to just work from my computer and just be anywhere in the world,” she said. Santorini, Greece and Singapore are on her list. She might even live in Vancouver, Canada. “I like to be around Asian people,” said Sasha.

Sasha wishes that others would have more empathy for the Asian-American experience. “People have experiences that are different from yours. I wish non-Asian people would be more accepting of that.  And educate themselves more instead of expecting other people to do that job for them,“ she said.

To her Asian friends, Sasha said, “Even though we are all under the umbrella of being Asian, we still are different. I am adopted and maybe they are not. We still have those differences, even though we are Asian.” She thinks that despite the difference, Asian Americans are connected through experiences of living in two worlds.

Perhaps this is another red thread that binds across geography and time. 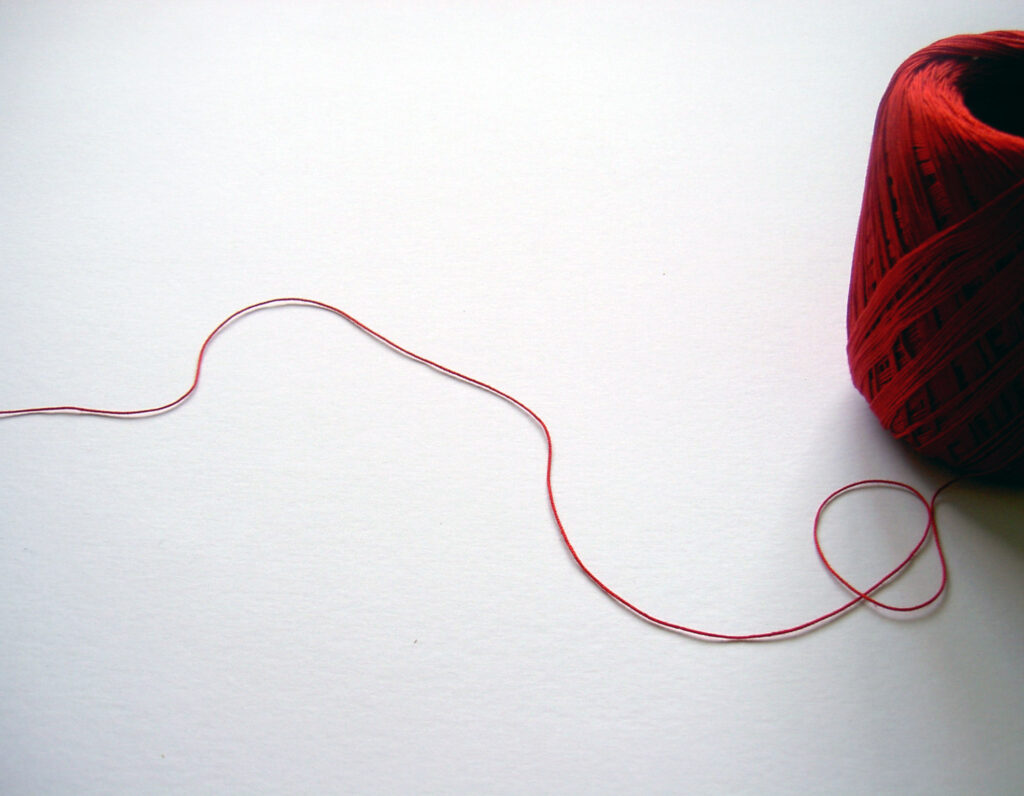 A red thread that could be stretched but never be broken. [Credit: Free Images / Nicootje]