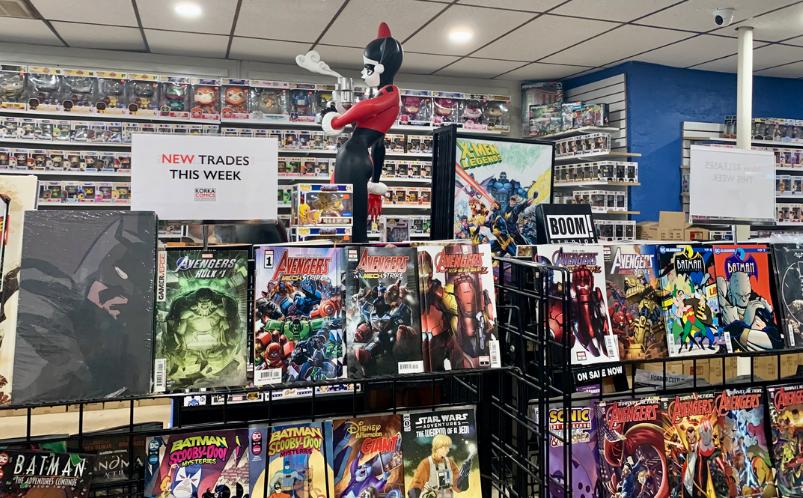 In South Florida, Korka Comics Is The Place To Be

(PEMBROKE PINES, Fla.) — Across from a community college and a public airport sits Korka Comics – a small local business that not only sells comic books but collectibles, gaming, and much more.

With three locations in South Florida — in Coral Gables, Miami, and Pembroke Pines — Korka Comics first found its home in Pembroke Pines over 25 years ago, though initially under different ownership and a different name.

In 2013, Steven Korka, the owner, bought the Pembroke Pines location and changed its name to Korka Comics.

Now in 2021, as many small businesses have been opening their doors again to customers amid the COVID-19 pandemic, Korka Comics continues to be the go-to spot for many comic fans here in South Florida. The store — along with its Coral Gables and Miami locations — faced months of losses because of business shutdowns, but so far, have been able to recover.

“We’re basically at the same level as we were before COVID,” said Juan Farach, store manager of Korka Comics in Pembroke Pines. The Miami location has even grown, he said.

Before becoming an employee at Korka Comics, Alexandra Torres had shopped at the comic store since her freshman year of high school. Being a big Marvel fan, Alexandra would shop at Korka Comics to buy Funko Pops.

“Once I turned sixteen, I wanted to work here because being a Marvel fan, just always talking about it, I’m like, ‘This would be perfect to work here, I would love to work here,’ said Torres.

Every time she visited the store, Torres would ask if they were hiring. It wasn’t until about three to four months ago that Alexandra had seen on Korka Comics’ Instagram that they had an opening.

“I immediately emailed them and I came in for an interview and I got it,” Torres said. “I was so excited for that because I’ve been asking every time I’d come for like three years.”

Steve Hollingsworth has been a customer since he was a teenager when the store was under a different name and ownership. Now, Hollingsworth brings his daughter Brynn to the store as well.

“Support the brick and mortar,” Hollingsworth said. “Go to the store, support, don’t just read digital comics. Get the paper comics because it’s a dying industry.”

Emilio Castillo had just recently heard about Korka Comics and stopped by to get a value on some comic books that he had received.

“Obviously walking in here, they have a lot of novelty stuff,” said Castillo. “Growing up, I’ve always liked superheroes and you know, just like sci-fi stuff in general… But, I mean, it’s cool to just see this stuff and see people who have similar interests. You kind of like geek out for a bit.”

And at Korka Comics meeting new people is a part of the experience amongst the comic book community — whether you’re new to the scene or not.

“When you talk to people and just seeing how passionate they are about certain things, it’s pretty dope,” shared Castillo. “I love seeing what people are about so it’s really interesting how some people know so much about this stuff and how much depth there is to it. I always thought that was really cool.”