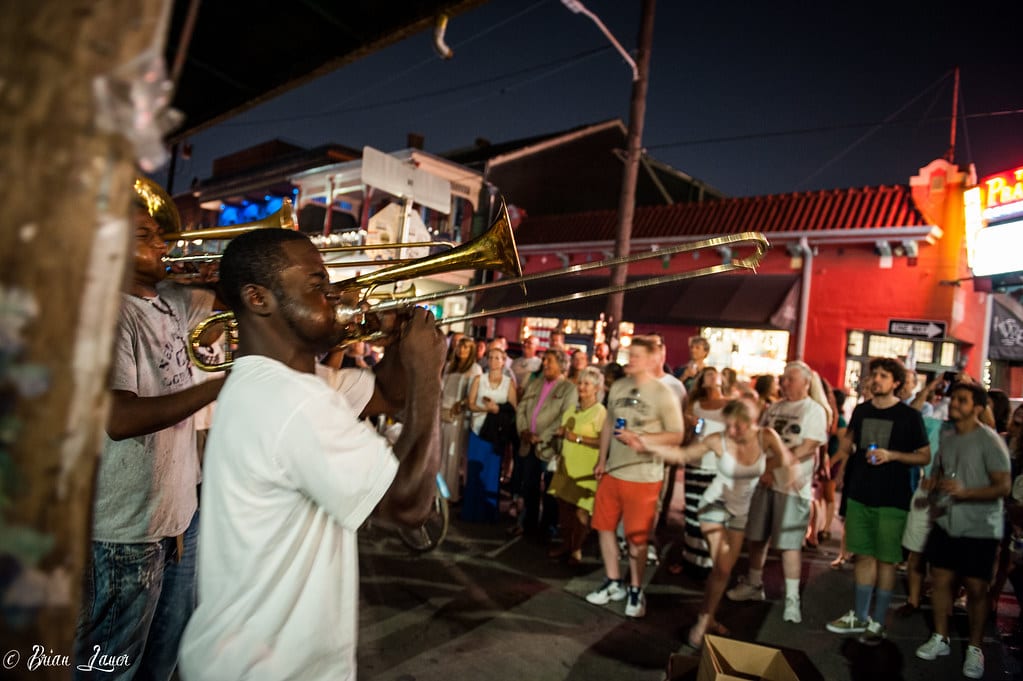 In the Big Easy, Coexistence on Frenchmen Street Changes Key

Some are drawn to New Orleans for its local cuisine, simply to try hearty dishes like seafood gumbo or po’ boy sandwiches. Some visit to take a steamboat ride along the Mississippi River to enjoy the city’s architectural history, nature and beauty in a single cruise. New Orleans is also world-famous for its street performance culture, and one of the hotspots of this music capital is Frenchmen Street. However, a 911 call over the summer shed light on the turbulence between a band and a small business owner, shaking the peaceful coexistence of the street.

Frenchmen Street was recently the scene of a conflict that became nation-wide news. According to Nola.com, musician Eugene Grant—affectionately known as “Little Eugene” by friends and bandmates—was arrested the night of July 8, 2019. David Zalkind, the current owner of Frenchman Art and Books, had called the police on the Young Fellaz Brass Band for blocking his business. 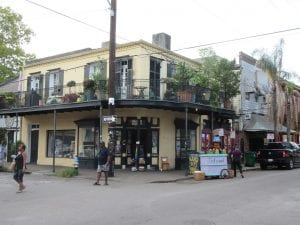 Frenchmen Art and Books, the scene of the arrest, at the intersection of Frenchmen Street and Chartres Street. (Photo Credit: Infrogmation of New Orleans)

Michelle Hunter, staff writer for Nola.com, reported that, New Orleans police took him into custody “on charges of obstructing the public right-of-way and resisting arrest.”

The city became enraged as the viral video circulated the web. Many argued this was part of a pattern of White people calling the police on Black individuals for insignificant reasons.
Questlove, the drummer of The Roots, compared the incident to someone calling the police for the smell of cheesesteaks in Philadelphia.

“That’s absolutely a valid analogy,” says Jeff Albert, a musician who has played in New Orleans for thirty years. “To complain about music, even ‘brass band on the sidewalk’ music on Frenchmen Street is just to prove that you don’t understand what that space is about.”

“Even though it’s the more touristy version of it now,” adds Albert, “it’s still the place where people go to deal with music.” He says that reputation has existed throughout his thirty year career in the city.

Walk north through Frenchmen Street and on your right is the Dragon’s Den, where people wait in line to jig and bounce to rap and hip-hop songs old and new. On the left, in Vaso, you can hear live bands of all genres. From neo-soul stylings to traditional New Orleans funk, you can hear it there free of charge.

As you walk further down you will find Maison, The Spotted Cat, and The Blue Nile, famous staples of the street. One night at any of these classic spots you may find a traditional brass band. Yet music clubs are not the only businesses that reside on the street. 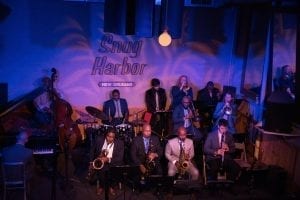 According to Zalkind, he had been contacting city officials for weeks regarding the band playing in front of his store, but to no avail. Zalkind says that the community liaison did not do what she was supposed to do in terms of opening communication.

“Her only advice was to simply call the police every time they played,” explains Zalkind. “And I said, ‘Why would I want to do that?’”

Megan Maloney, a representative of the New Orleans Hospitality Workers Alliance (NOHWA), has no sympathy for Zalkind’s plight. NOHWA’s mission is to “build a mass movement” of hospitality workers, which the organization considers the Young Fellaz Brass Band to be.

Maloney asserts that the band has been playing there for years, and that they have the right to play on any street corner.

“And that they can do so while knowing that they are physically not in harm from police harassment or brutality,” Maloney says, “and they’re not being harassed by racist store owners.”
Zalkind, however, does not find the argument of the band’s longevity relevant, as he insists that the bookstore has existed for forty years.

He believes that the context leading up to the phone call is one of the main pieces of the story. Zalkind was at the end of his rope, and says the band members laughed when he said he was going to call the police for playing in front of his store’s entrance at 100 decibels, which Zalkind says was measured. It was at this point that he called the police that night in July.

To Maloney, this is besides the point. For NOHWA, the issue lies in White business owners trying to displace Black people, who they argue are the reason why New Orleans culture as we know it exists today.

“At what point are Black people in New Orleans not allowed to play music in the street anywhere?” remarks Maloney.

However, Zalkind takes issue with Questlove’s tweet, and with NOHWA’s assessment of the situation.

“It’s all about framing and they reframed this event. It’s simply about blocking a business,” he says. “I’m fine with them playing across the street. They’re reframing it as ‘music.’ We’re not trying to kill the music.”

Zalkind additionally sees a difference between the general culture of music on Frenchmen Street and the Young Fellaz Brass Band, specifically.

This is one of many reasons Zalkind does not see a reason for there to be concern over the band’s ability to make money since July.

Yet NOHWA takes issue with this assumption. “They’re being pushed from … corner to corner, by business owners who don’t like young Black men playing in front of their business,” argues Maloney.

The legal maximum decibel level for Frenchmen Street is 75 dB, as the street is in an HMC-1 zone. Additionally, according to the “Sound Level Control Ordinance” of New Orleans from 2009, it’s against the law to play on “public rights-of-ways” between 8:00 p.m. and 9:00 a.m. The same document defined a public right-of-way as, “any street … sidewalk, alley or similar place normally accessible to the public which is owned or controlled by a governmental entity.”

Additionally, the “Sidewalk Use Permit” Division of the New Orleans Code states, “Sidewalk uses shall not be located within the corner area of a public right-of-way, which is that area between the curb and the lines created by extending the property lines of the adjacent property being served and the curb.”

As for the fate of Eugene Grant, Zalkind regrets that all of this resulted in an arrest. The band originally left when the police arrived after the call. Yet when the band returned a few minutes later, that was when Grant was arrested.

“He’s the innocent victim of the situation,” Zalkind states. Yet he stands by his choice. He says he had no other option. “I tried to prevent this, for weeks, from them being arrested,” he asserts.
“They were dispersed because they were scared for their lives,” Maloney says in regard to the band initially leaving after the police arrived.

To NOHWA, the band’s return to the scene after the initial call was made bares no relevance. What matters to the organization is that the phone call to the police was made in the first place.
According to the New Orleans Comprehensive Zoning Ordinance, the purpose of the district is, “Intended to provide for restricted retail stores and service establishments that will attract tourists and local residents without adversely affecting … the character of the historic … area.”

What seemed to be a peaceful coexistence has been shaken. One can only hope that progress can be made to attain this vision that the city holds for Frenchmen Street.