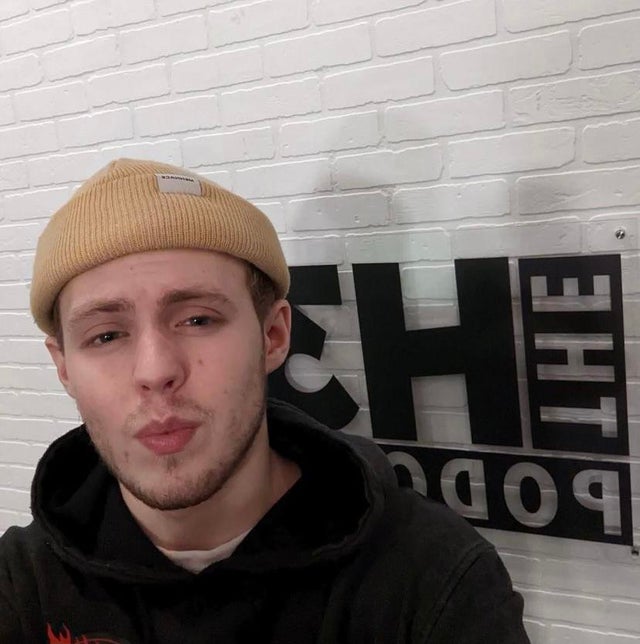 Interview: Love From The H3 Podcast

(Los Angeles) –  Sweden native Love Bot from The H3 Podcast is perfectly attuned to his unconventional routine. Despite his workplace being over five thousand miles away in Sunny Los Angeles, Love works harmoniously with his co-workers. Sitting at his desk with an array of colored lights in the dark, the 22-year-old is most known to H3 viewers by this familiar backdrop as he calls into the podcast, appearing on the screen of a roaming robot known as Love Bot.

With almost three million subscribers on YouTube, The H3 Podcast is a comedic production hosted by Ethan and Hila Klein and features multiple shows a week covering pop culture, politics, and everything in between. The Click spoke with Love about his transformational journey working on the H3 Podcast and what it’s like being in a different country than his coworkers. Love wishes to keep his last name private.

The Click: How long have you been working at H3 now?

Love: I’ve been working for a little over two years.

What is your role at H3?

When I first started working, back in  2019, I did social media clips almost exactly what I was doing for my fan account [H3 Out of Context]. I did Instagram and Twitter at the time. And then, just over the months, it kind of developed to me taking over the highlight channel. About maybe seven months in, I also started Tik Tok, and that was a massive hit. All of a sudden, I was a part of the crew, and that changed things a lot.

What is Love Bot? [The robot called “Love Bot” is a screen connected to a thin long pole with wheels.]

I control it with my keyboard like any other video game. I drive it around the office, visiting everyone and interacting with them. If they’re at the lunch table, or whatever, I’ll be at the other end of the table. I’ve even sat behind the couch when a big video drops and watched it with the rest of the crew. For example,  I’ll roll up to Cam and talk to him for a little bit.

When did you meet the crew [of the podcast] for the first time?

Before really revealing who I was, everyone just referred to me as Love from Sweden. I was this mythical creature no one had seen. Even the crew hadn’t seen me before the Simp Episode. I hadn’t had a reason to show my face to them at any point. And it wasn’t until that day that they saw me. I don’t think we ever talked about that on the show.

What role does Twitch play in your life?

I don’t promote Twitch that much. It’s this kind of tight-knit little community I have, and I really love it. And I try my very, very best to kind of distinguish it from H3 podcasts. I’m really trying to do my own thing.

You are the owner of a Twitter account called ”H3 Out of Context” how did you create this account, and what inspired you to make it?

I started replying to Ethan from my personal account on Twitter. No one really knows about that. I started doing it from my personal account, just typing silly stuff. And I noticed people started liking it, and Ethan noticed me. Interacting with this person I’ve listened to for five-plus years is pretty cool. And the more people liked it, the more I kind of thought about it, and I ended up starting a Twitter account dedicated to just annoying Ethan, which I called “H3 out of context.”

I basically took the podcast, cut it down to these super short bite-size clips, and just made them look as bad as possible. But that was also back in the days when there wasn’t that much drama or stuff like that. So it’s just more fun. Maybe if I did it nowadays, it would have seen look like I was the biggest hater like you were against Ethan. I tried not to make it look mean-spirited or anything like that. Over the months that just kept growing, that account kept growing. I woke up one day with Ethan following me. And that was the craziest thing ever.

How did you get hired?

I got a message from the podcast account saying they would love to work with me. And I thought it was so crazy. I did not expect anything from this and for this to lead to what it did was amazing. But I ended up emailing a little bit back and forth, and they offered me a part-time job. But quickly, it ended up being a full-time job. I quit my current position like two and a half weeks later, and that’s how it all started.

Can you describe what it’s like with a nine hour time change and being over five thousand miles away?

Working with people nine hours away is a bit tricky. It works in my favor because if we do a podcast the day before, I go to bed after the podcast, and then I wake up in the morning in Sweden. And I have around nine hours to kind of finish highlights and a couple of social media clips. And then I have all this stuff ready for when they wake up.

Do you get recognized in public now?

In Sweden, very rarely. It maybe happens once every two months, so pretty much never. But I will say when I went to LA for vacation for three months, I had a lot of fun interactions and was recognized almost every day. The second I went out, someone would recognize me.

What’s your favorite memory of working on the show so far?

They always celebrate me through birthdays or my anniversaries. I live a little bit outside of the city, and somehow, they got a cake delivered to me during the show. It was pretty funny. A pretty sizable cake. Just some random lady and the cake company came up to my house. I like when they do stuff like that because it makes my position very real. Like, wow, they put in effort for me.

There is this common thought in my head where I think I have it very, very comfortable right now. I mean, you know, working from home is nice. Sometimes it’s boring. But it’s nice. You don’t have to go up like an hour before work or anything like that. Sometimes I’ll leave my bed five minutes before I have to start working. And you know, no one knows. Throw on a hoodie, and I’m ready.

Would you consider this your dream job?

Yeah, I definitely would. I mean, right now, it’s my dream job just getting to be on the show to any extent. Going there in person is just like the cherry on top. I’m already kind of living my dream.

This interview was edited for length and clarity.