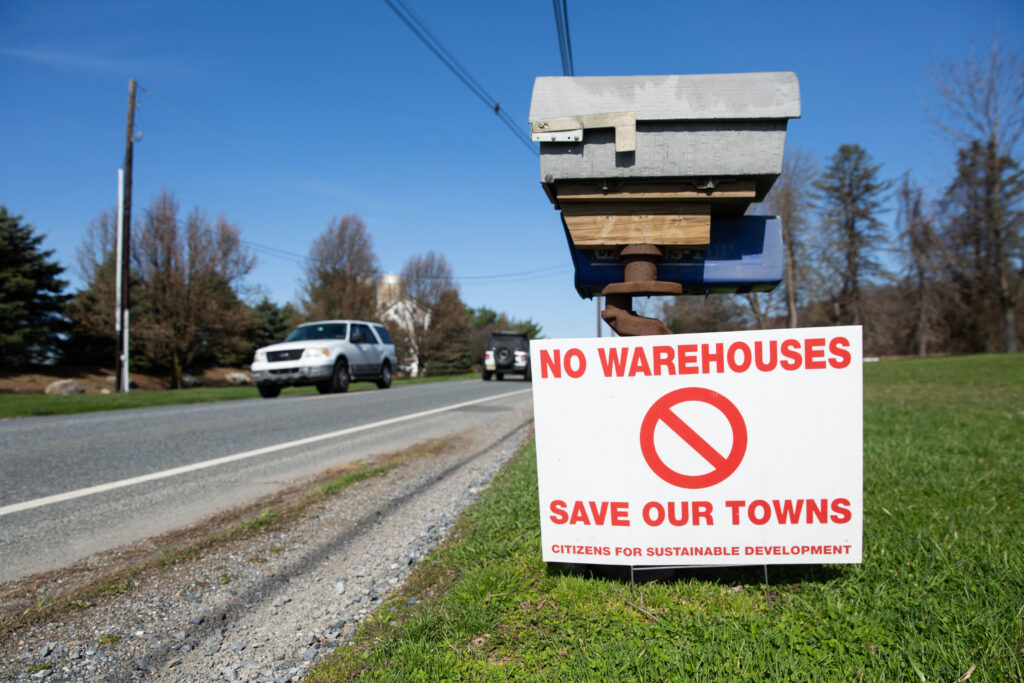 A White Township resident’s front yard pushes back against proposed warehouse development plans in the town. (John General / The Click)

A Warehouse Boom Is Changing America’s Farm Towns. These New Jersey Activists Are Fighting Back.

(HACKETTSTOWN, New Jersey) — Tom Bodolsky remembers when the roads of New Jersey’s Warren County were quiet enough to drive his lawnmower a mile and a half to the only gas station in town.

Today, that trek would be nearly impossible — and the cause is a surprising one.

Rural regions like Bodolsky’s are facing the consequences of housing the warehouses that support our growing digital-shopping habits. And that means a host of changes for these communities, among them busier roads.

Bodolsky has lived four decades in White Township, a tiny town in Warren County.  He’s decided to fight the changes sweeping through the once-idyllic area. He’s joined by a band of local activists who have long protested the arrival of two massive warehouses proposed by the Jaindl Land Company, one of the region’s largest land developers. The group fears that an influx of freight trucks humming along local infrastructure could threaten their generations-long way of life.

“Warren County is the last rural bastion in the state of New Jersey. We can’t afford to lose it,” Bodolsky told The Click. “People understand that we need a rural area. We need nature and they flock out here. But yet they’ll go to their computer and press the button and order from Amazon, and they don’t put two and two together.”

“This will be a life changer if this development goes through,” Bodolsky said.

Warren County and a few other counties in neighboring Pennsylvania make up an area called the Lehigh Valley. On the Pennsylvania side, Jaindl already boasts an extensive portfolio of warehouses, industrial parks, and even the region’s largest turkey farm. The company’s proposed warehouses in White Township will be its first industrial foray in the Garden State, according to its website.

Jaindl did not respond to The Click’s request for comment.

The rise of warehouse space in the region has been sharp and swift. Local governments in the Lehigh Valley approved 29.9 million square feet of warehouses in the last five years alone, according to Becky Bradley, who is the executive director of the Lehigh Valley Planning Commission (LVPC). That agency oversees development in Pennsylvania’s Lehigh and Northampton counties.

Logistically, this makes sense. The Lehigh Valley was estimated to be the second-fastest-growing distribution area in the world in 2017, according to CBRE, a retail investment firm.

“Companies that set up shop here can reach 40% of the country’s population within a six-hour truck drive, and land is still relatively cheap,” local news outlet Lehigh Valley Live reported in February 2020.

That growth is in large part due to the explosion of online shopping over the past two decades, which these warehouses often are built for. Amidst the pandemic, online sales reached record highs jumping 32 percent from 2019, according to US Census data.

Bodolsky is the vice president of the local activist group Citizens for Sustainable Development (CFSD). They’ve fiercely opposed the proposals made by Jaindl.

“When my wife read in the paper that Jaindl happened to buy 600 acres in my township and was proposing warehouses, her comment to me was, ‘We’re moving,’” Bodolsky said before taking a long pause. “I’m not moving. It’s very personal.”

While CFSD doesn’t oppose warehouses entirely (and they’re quick to point out that they don’t fault people for shopping online), it’s Jaindl’s choice of location that has ignited so much controversy.

“CFSD is not against development,” Theresa Chapman, the group’s president, told The Click. “In the right locations, it’s appropriate. This is not an appropriate location. It’s completely in a residential area and it’s going to destroy people’s lives.” 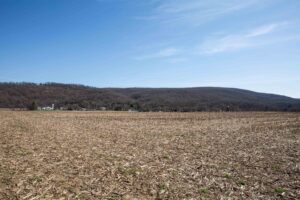 The Jaindl Land Company plans to build its 2.7 million square feet of warehouses on farmland. (John General / The Click)

White Township, all 28 square miles of it, has a population of just under 5,000. Cutting through its rolling farmlands is County Road 519, where white signs fork out of residents’ front yards bearing an apocalyptic message: “No warehouses. Save our towns.”

It’s this county road that Jaindl’s warehouses will rely on. The developer plans to build two: an 800,000-square-foot building and an adjacent 1.9-million-square-foot warehouse on land the company purchased for $11.2 million in 2019, according to documents obtained by The Click. That would be a total of 2.7 million square feet of storage.

The activists argue that the warehouses will create unsustainable pressure on local infrastructure and the environment. Traffic-impact studies, for one, estimate that County Road 519 could be forced to widen from two lanes to four in order to sustain the increase in freight traffic caused by the structures.

However, local media outlet NJ Spotlight News reported that Paul Sterbenz, the town board’s engineer, said early last year that this might not be necessary because the structures would have what’s called a “high-cube” design.

High-cube warehouses are much taller than traditional repositories. Ceilings for high-cube warehouses have been proposed as high as 180 feet, according to the LVPC. They’re also far more efficient due to being highly automated, meaning robots can do much of the work. That leads to less jobs created and “likely increases freight trips in and out of the site,” according to the LVPC.

“Not all warehouses are bad,” Bradley said. But she added that figuring out the right balance between warehouse development and quality of life for a town is “the biggest issue of our time.” 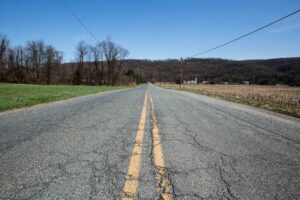 Activists worry local infrastructure, like this one, will not be able to hold up against an influx of freight trucks. (John General/The Click)

Increased traffic isn’t the only criticism that Jaindl faces. Air pollution in the Pennsylvania portion of Lehigh Valley is now on par with (or at times worse than) metropolitan areas such as Philadelphia and Pittsburgh, according to the Environmental Protection Agency. Conservationists point fingers at the warehouses there as the main culprits.

While Jaindl’s warehouses in White Township won’t single-handedly cause Philadelphia-level air pollution, “it’s just chipping away at the health of the land and the river environment,” said Fred Stine, a local conservationist.

The nearby Delaware River, just a short walk from the proposed structures, could also be impacted. Turning farmland into asphalt increases the risk of diesel, antifreeze, hydrocarbons, and brake lining, among other liquids, to run off into the water because of the reduced amount of soil that can absorb them, Stine said.

Beyond environmental impacts, the warehouses could also deteriorate the quality of recreational activities in the area.

“On the river, as you’re paddling down now, instead of going by a tree-lined river with some farmland in the background, you’ll see the rooftops of a warehouse at night. You’ll see the lights come on at the warehouse,” Stine said.

It won’t be the first manmade structure to interrupt the scenery, though: Martin’s Creek Power Plant towers over the local flora across from Jaindl’s property, on the Pennsylvania side of the Delaware River. 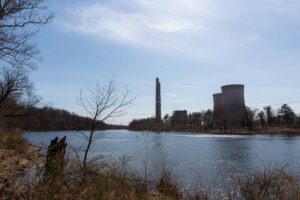 A power plant sits across the Delaware River in Pennsylvania. Fred Stine of the Delaware Riverkeeper Network worries the new warehouses would further chip away at the river’s health. (John General / The Click)

Of course, while CFSD opposed Jaindl’s warehouses on the basis that it’s on farmland away from major highways, warehouses do need to be built somewhere.

“There are plenty of places to put warehouses that are closer to the [Port of Elizabeth],” Julia Somers, executive director of the New Jersey Highlands Coalition (NJHC), told The Click. The Port of Elizabeth in eastern New Jersey is the second busiest port in the U.S., according to the Bureau of Transportation Statistics. “You don’t have to put it on farmland.” The NJHC is a nonprofit collecting 130 groups, including CFSD. Somers pointed to New Jersey’s surplus of abandoned malls as viable options for new warehouse development.

“We’re on an absolute critical tipping point,” Chris Amato, a Pennsylvania resident of the Lehigh Valley and member of CFSD, said about the growing warehouse sprawl in Pennsylvania. “And if this spills over into Warren County, it’s just more sameness. It’s a fiscally insolvent proposal.”

The controversy that Jaindl’s warehouse has sparked in White Township gets to a much larger problem that many small towns in the country face: outdated zoning policies.

White Township, for one, designated the land that Jaindl now owns for industrial use in 1999. Industrial zoning at the time included warehouses. But that was over two decades ago when free one-day shipping was logistically unimaginable. Town planners in 1999 could not foresee how large and busy warehouses would become in a relatively short period of time. Back then, Amazon was hardly a household name.

“A lot of these towns got caught with their pants down,” Bodolsky said. “The towns are slowly reacting, but the cow’s out of the barn, and to get it back in — we can’t. We just need to battle what is before us.”

The approval process for Jaindl’s warehouse plans is ongoing. But if approved in their current capacity, White Township residents will find a new 2.7-million-square-foot neighbor on the banks of the Delaware River despite their  “No warehouses” signs. Still, Bodolsky doesn’t see it all as a failure.

In its 2020 amendment, White Township’s governing board barred any further warehouses from being built in industrial zones like the one Jaindl is developing, according to a copy of the amendment obtained by The Click. Jaindl’s warehouses are expected to be grandfathered in because the plans were submitted prior to the amendment.