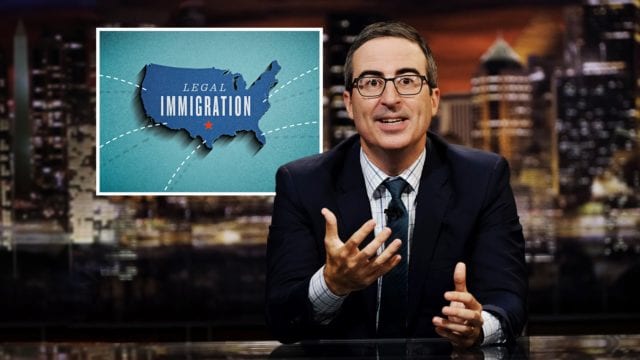 John Oliver on set for his episode on legal immigration

John Oliver on set for his episode on legal immigration, which aired on HBO on September 15.

New York, NY – John Olivers starts his September 15 “Last Week Tonight” episode by comparing himself to Albert Einstein and Yo-Yo Ma. So what do a genius, musician, and comedian have in common? They all came to the United States as immigrants. John Oliver guides his audience through the definition of “legal immigration” — from President Trump’s perspective and from a legal perspective. Oliver plays a clip of an MSNBC presser of the President defining the visa lottery system as countries putting their “worst” people’s names in a bowl and the United States choosing a name out of the batch. Oliver mocks the President’s definition by comparing it to a game of bingo and reminding his audience how inaccurate the President’s description is. Oliver then explains the systems of immigration in the United States with the support of news reports, newspaper headlines, and government documents.

In every episode of “Last Week Tonight,” John Oliver takes a satirical look at the current news, political scene, and international events. Humor and ridicule are not terms usually associated with serious news, but somehow Oliver’s comedic take educates and informs his audience just as major news networks, newspapers, and magazines. But do his similarities to these other parties qualify him as a journalist?

According to the Pew Research Center, it is a journalist’s responsibility to report the truth, verify all of the facts, stay loyal to the public, and not be biased. A journalist is a detective, researcher, and educator all in one package. For each story covered, they must analyze, learn, and take the extra mile to rigorously fact check and “Last Week Tonight” does just that. The unbiased reporting is where John Oliver may seem to depart from the definition of a journalist, but today it’s difficult to find any news outlet or newspaper that doesn’t skew a certain way.

“We are very, very strict about making sure that every piece of information that we pass along, we fact-check independently,” Oliver told The New York Times.

Throughout his episodes, John Oliver shows various clips of the President and senators speaking, news reports, and provides statistics and data from reputable sources such as NPR, the Pew Research Center, and CNN to support his story. In the legal immigration episode, Oliver breaks down the four different ways of obtaining your American citizenship – through family, employment, good luck and bad luck.

When discussing the family approach to obtaining American citizenship, Oliver plays a montage of clips from MSNBC, Fox News, and CBSN of President Trump saying that chain migration is not a good thing because anyone can invite any member of their family to come be a citizen. John Oliver explains how this information is false and that citizens can only sponsor close relatives such as a husband or wife, parent, or child. He references data published by the U.S. Department of State that shows the government is over a decade behind in reviewing family-sponsored immigration from China, India, and Mexico.

The same “Last Week Tonight” episode also touches on refugee immigration and the White House’s stance on this type of immigration. According to NPR, “the White House is weighing whether to cut that number to zero.” Another Reuters report also states that President Trump’s new immigration refugee rule “targets poor and could cut legal immigration in half.”

By fact-checking and supporting his reporting with other voices, publications, and data, John Oliver fulfills two of the four core principles of a journalist – the obligation to the truth, and verifying the facts. He also fulfills the third core principle of being loyal to the public through his humor.

As a comedian, it is John Oliver’s job to humorously presents information to the public. It’s a bonus that he also fills the shoes of a journalist in his acts. Throughout the legal immigration episode, Oliver does not shy away from mocking the President. After a C-Span clip is shown of the President saying that the United States is full and cannot accept any immigrants, Oliver shows images of the vast empty fields and farmland in America, joking on how “full” they really are.

Each of “Last Week Tonight” episodes informs the viewer of news events from the past week. By taking time to research and confirm all information being reported and sharing multiple sources throughout its broadcast, the program follows the core principles of journalism. Although John Oliver’s satirical take on the news may show his opinion on the stories he is reporting, the program does a good job of showing all angles of the topic to allow the viewer to ingest the information and form their own opinion, all while laughing.