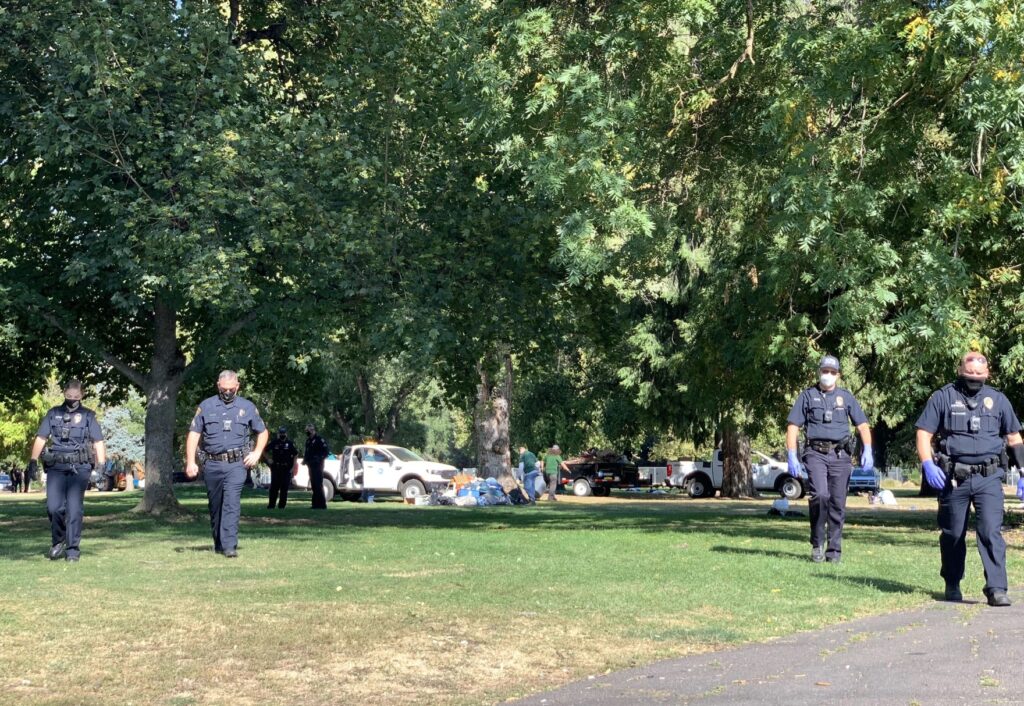 Medford Police do a sweep in Hawthorne Park on Sept. 22, 2020, to remove a homeless encampment. [Credit: Erik Neumann, JPR]

(MEDFORD, Oregon) A trial next month, City of Medford v. Fonseca, will pit law enforcement against the free press in a case that’s garnered global attention. 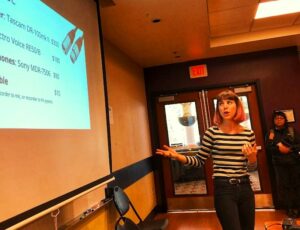 On the morning of Sept. 22, 2020, Medford city police began removing a homeless encampment from Hawthorne Park where about 100 people had set up tents. The encampment had steadily grown and expanded following the Almeda Fire that had swept through the area earlier that month, leveling hundreds of homes and businesses in the nearby towns of Ashland, Talent, Phoenix, and Medford.

On this day, the residents had been given 24-hour notice by Medford authorities, and a reporter with Jefferson Public Radio at the time, April Ehrlich (whose legal name is April Fonseca), was present in the early morning hours before the eviction began to continue her coverage of the homeless camp.

According to JPR, police had instructed media to stay in a designated staging area that placed them at an entrance a fair distance from the encampment as officers moved the unhoused people off the city park grounds. Unable to properly hear or witness the interactions between police officers and the camp residents, Ehrlich moved in closer with her recording gear and was promptly arrested. She was charged with interfering with a peace officer, second-degree trespassing, and resisting arrest.

In a formal statement, JPR contested the police action. “There was no compelling public safety issue in the park that day, no violent person, no weapons, no threats – just a group of homeless people with stories,” it said. “April is a professional journalist and part of her job is being present during charged situations that sometimes involve law enforcement – she knows how to be close enough to report without interfering. She respects the work of law enforcement.” 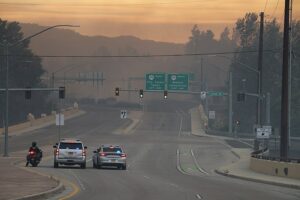 After being detained for a good portion of the day, Ehrlich was able to post bail and was released that afternoon. She now faces trial on September 16 and 19. If convicted on the second-degree criminal trespassing charge, she could get up to 30 days in prison and be fined up to $1,250. On the more serious charge of resisting arrest, Ehrlich could face a maximum prison sentence of one year behind bars and a fine up to $6,250. Luckily, the other charge of interfering with a peace officer was dropped by the Medford City Attorney without explanation.

A number of organizations have expressed concern and support for Ehrlich. The Committee to Protect Journalists stated that she was simply doing her job and reporting on a matter of public interest. “The charges against Ehrlich must be dropped immediately, and the Medford police should revise their policies to ensure that journalists can cover the news without fear of arrest and criminal prosecution,” CPJ declared in a public statement.

Dozens of groups, including the Radio Television Digital News Association, the National Press Club Journalism Institute, Journalists without Borders, and the Society of Professional Journalists* have condemned Ehrlich’s treatment. Her arrest, detention, and charges are part of a larger, disturbing picture for reporters who have seen a steady increase in anti-media hostility in recent years. The U.S. Press Freedom Tracker’s data for 2020 shows that in Oregon alone, there were 219 incidents against journalists, including arrests, assaults, and denial of access.

In an article published in the New Delhi Times, Kirstin McCudden of the U.S. Press Freedom Tracker was quoted saying, “When journalists are kept from doing their job — the ability to report — because they’ve either been moved away from the scene, or kept away somehow in the detainment, or captured in a kettle and not allowed to keep recording, it affects their ability to tell the story, to do what they have a right to do, which is both be there and be there to disseminate news.”

The Attorney’s Office for the City of Medford has pushed back on calls to drop the charges against Ehrlich, but has also withheld its reasons. Nearly two years after the evacuation of the homeless camp, the only response shared to inquiries was in an Oct. 14, 2021, letter to the Reporters Committee for Freedom of the Press. In it, city attorney Eric B. Mitton said, “Our office is expressly prohibited from engaging in public debate on such matters,” then cited an Oregon Rule of Professional Conduct and the 1966 case, Sheppard v. Maxwell, a U.S. Supreme Court case which explored how an unrestricted media circus could disrupt a defendant’s right to a fair trial.

In another letter to the City of Medford, the Reporters Committee for Freedom of the Press wrote, “The City’s year-long refusal to dismiss charges against Ms. Ehrlich stands in sharp contrast with the way other prosecutors throughout the United States typically handle cases where police take journalists who are covering controversial events into custody. In almost all such cases, the prosecuting agency declines to proceed with charges.” The RCFP also noted that of the 142 journalists arrested or detained in 2020, Ehrlich is but one of 11 that were charged by authorities.

One of the larger profile cases that RCFP points to is that of Andrea Sahouri, who was covering a Black Lives Matter protest for racial justice for the Des Moines Register in May 2020. She was pepper-sprayed and arrested by police as they responded to the destruction of property at the Merle Hay shopping mall. For nearly a year, Polk County Attorney John Sarcone refused to drop charges of trespassing and interfering with official acts against Sahouri. Her then-boyfriend Spenser Robnett was also sprayed and handcuffed after telling an officer that she was a reporter working for the Register.

The U.S. Press Freedom Tracker said Sahouri was the first working journalist in the U.S. to go to criminal trial since 2018, and noted that she and Robnett could have been fined hundreds of dollars and spent up to a month in jail. More than a hundred groups denounced the charges, and for what some called a lack of prosecutorial discretion at taxpayer expense.

In an embarrassing upset for the prosecution, the jury – after deliberating for less than two hours – ended up acquitting Sahouri of both charges.

Trevor Timm, executive director of the Freedom of the Press Foundation, issued a statement that said his organization “is heartened that the jury apparently saw this case for what it is: a disgraceful use of prosecutorial resources and an assault on fundamental principles of press freedom. The jury verdict is welcome, but doesn’t fully lift the shadow this prosecution has cast over one of our country’s most core values.” 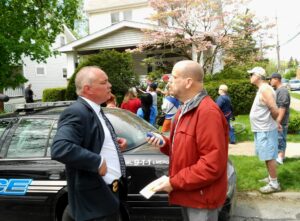 In this 2013 photo, a Cleveland plainclothes police officer blocks a reporter from passing a perimeter set up outside the home of former kidnap victim and captive Amanda Berry. The debate over journalists’ access to developing events and complying with police authority has gone on for decades.  [Credit: Brian Bull]

Speaking specifically to the upcoming trial in Oregon, McCudden said “It’s concerning whenever a journalist is arrested or detained while reporting as they are rendered unable to freely document events, and the public loses that public service. It’s especially concerning in a case like April Ehrlich’s, where a journalist is charged with a crime and those charges aren’t promptly dropped. It can have a chilling effect on the media and be a drain on resources to fight the charges.”

In revisiting the high number of press freedom violations in 2020, McCudden determined several factors, including social justice protests following the death of George Floyd by police in Minneapolis.

“Protests, which have always been dangerous places for journalists, were widespread nationally and over many weeks and months. The law enforcement response — to arrest and assault large numbers of journalists — was done largely with impunity. And a then-president who routinely denigrated the media all combined so that the U.S. Press Freedom Tracker documented the most arrests and assaults of journalists in 2020 than any other time in its 5-year history.” (McCudden invites readers to find other press freedom violations similar to Ehrlich’s arrest by using the Tracker’s tag, #encampment.)

A request for comment from the Oregon Peace Officers Association on why police would be justified in arresting or detaining journalists has not been responded to yet. In a statement issued by the City of Medford in October 2020, spokesperson Kristina Johnsen said after a “thorough review” of the evidence, the city attorney’s office filed criminal charges against those defendants “where the relevant facts and applicable law warranted pursuing the charges.”

Ehrlich herself has continued reporting, and began working for OPB in November 2021. She has not commented publicly on the case, save for an October 2020 tweet announcing that the City of Medford dropped the count of interfering with a police officer. She’s represented by Portland attorney Stephen Houze in her upcoming trial. A request for comment from Ehrlich was delegated to Houze and his son, who acknowledged that while this case is a very important First Amendment case, “we must observe the ethical constraints on litigants and attorneys making substantive statements re a pending case.”

In an October 2020 story by OPB, Houze stated that his client is “absolutely innocent” of the charges.

Among those watching this case closely is a journalism professor at the University of Oregon, Damian Radcliffe. He said this is all very troubling. “Regardless of the specifics here, journalists do have the right to access, to be able to report,” he said. “There are legitimate concerns that we very much saw come to the fore in 2020, and I think still remain very pertinent, about issues of access and also of public officials trying to potentially control the narrative.”

Another factor, added Radcliffe, is how the global community will regard the United States’ standing, as it’s generally seen as a country that upholds many tenets of democracy, including a free press.

“How these types of cases manifest themselves here in the U.S. can encourage similar behaviors, many of which are encroachments on media freedom and are restricting the access of journalists,” he said. “Some of those behaviors then become more common in other countries around the world, so that’s also a very legitimate source of concern.”

“The impact of this resonates far beyond just Medford, and the Pacific Northwest.”

* Note: Ehrlich has been vice president of SPJ Oregon.