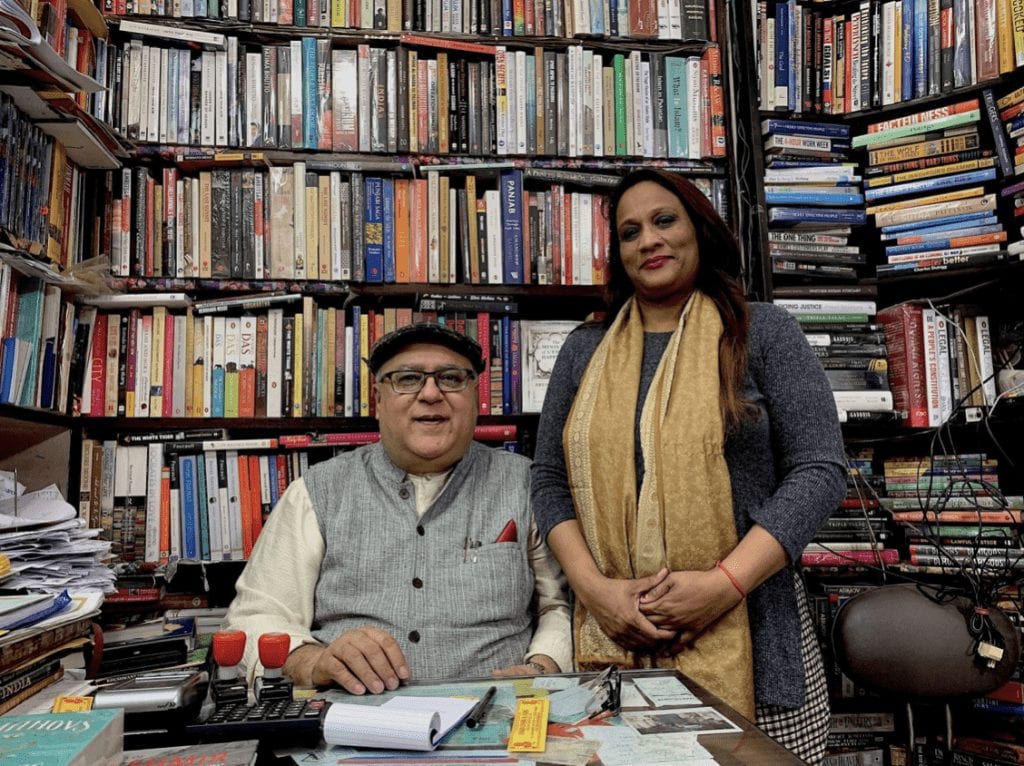 NEW DELHI – Khan Market is a tonied market in the heart of South Delhi, plunked between posh government buildings and Delhi’s furiously growing upper middle class. It’s among the most expensive commercial real estate in the world, comparable in price per square foot with New York’s Fifth Avenue or London’s Oxford Street.

But this wasn’t always the case. Khan Market was created in 1951 to house desperate refugees after India and Pakistan were brutally partitioned when the British fled India in 1947. Reflecting the tense Hindu nationalist climate in India today, some of Prime Minister Modi’s supporters have called to change the market’s name from it’s Muslim name to a Hindu name. Mr. Modi’s propensity for sweeping overnight decisions has bolstered confidence in his supporters. This has some Khan market business owners unnerved–a sentiment that pervades the political climate in the capital city today.

The Name Change Proposal: From Khan Market to Valmiki Market 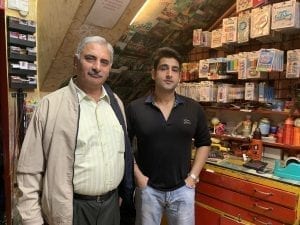 Sanjiv Mehra, owner of Allied Party Stores, has been the President of the Khan Market Traders Association for two decades. He is one of only four remaining original family owners from the Northwest Frontier Provence (now Pakistan) in Khan Market. Photo by: Christina MacGillivray.

When I entered his Khan Market shop Allied Party Stores, Sanjiv Mehra sat joylessly surrounded by children’s birthday decorations, party hats, helium balloons and stacks of Chinese Checkers. “We can provide you horse ride, camel ride, elephant ride, bouncy castle, magic show, puppet show” for children’s parties, he said in a monotone, betraying no enthusiasm for his profession. “Anything you want we can provide.”

Mr. Mehra has served as the president of the Khan Market Trading Association for two decades. In May 2019 a member of Prime Minister Modi’s political party, the Bharatiya Janata Party (BJP), petitioned to change the market’s name from Khan Market to Valmiki Market, reported Mint. Valmiki is a poet alleged to have authored one of the foundational texts of Hinduism, the Ramayana.

Khan Market’s original namesake, Khan Abdul Jabbar Khan, was a Muslim freedom fighter. Khan was known as the “frontier Gandhi,” in reference to his work in promoting nonviolence during India’s freedom struggle. Khan is a distinctly Muslim name.

India’s political climate is becoming increasingly hostile towards it’s Muslim citizens. At the center of this, Modi’s government is known for sweeping overnight changes. In 2018, he declared 80% of the cash in circulation void without any notice. The country is still recovering from this move called “demonitization.” In August 2019, he revoked the Muslim-majority state of Kashmir’s special status overnight, bringing Kashmir under control of his Central Government.

Prime Minister Modi’s Home Minister Amit Shah recently released a statement saying, “Christians, Jews, etc are welcome.” This statement made obvious who was not included. Shah is rumoured to succeed Modi as the next national leader.

Confronted with the proposal to change Khan Market’s name to a stridently Hindu name, Mehra petitioned Home Minister Amit Shah to repeal the motion. Mehra insisted the name change threat was serious. “In India anything can happen,” he said. “That’s why we fought tooth and nail against it.”

Khan Market: An Unlikely Candidate for the Nation’s Most Expensive Real Estate 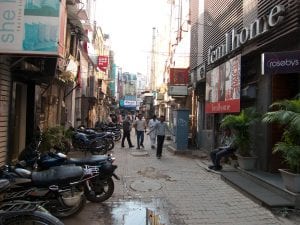 The Delhi Walla photographer Mayank Soofi described how a foreign visitor might not be able to recognize the market’s cluttered beauty, an unlikely candidate for the most expensive real estate in India. “It’s only when you live here that you know the value and the preciousness of it,” he said. Soofi said Khan Market’s change is emblematic of the country’s change. “Khan Market is changing in a very obvious, obscene, vulgar in your face kind of way which you cannot sense any longer in the great cities of the West.” Photo Credit: Creative Commons.

Khan Market is serially rated the most expensive real estate in India. The price per square foot is comparable with London’s Bond Street or New York’s 5th Avenue. But a visitor coming to India for the first time from London or New York might never imagine this comparison to be the case. It’s an open air market with an uneven cobblestone path in the middle. Wires crisscross the exteriors. Open door urinals mark either corner. Resident hawkers and beggars ply their trade at their own designated corners, belonging as much to the market as the new Marks&Spencers shop.

Among the daily visitors to Khan Market is photographer and writer Mayank Austen Soofi. “If I told my friends in Paris or New York that Khan Market is the place to be, they would laugh. There are gutters in the middle lane,” Soofi said.

In many ways this low-market-high-market contradiction is emblematic of India’s aspirations. “If you airdrop someone here they won’t realise what a place it is,” said Soofi. “Only when you live here can you come to understand what a fantastic, silly, stupid, foolish, beautiful place Khan Market is.”

Soofi migrated to Delhi in his 20s from a small hilltown. He lived in a slum outside the Radisson Hotel, where he worked endless hours as a waitor. Like many in India, he furiously clamered his way up the economic ladder. Today his blog The Delhi Walla is one of the most prolific photographic chronicles of Delhi, “assembling a portrait of a megacity in a volatile age,” the New Yorker wrote.

His origin story gives him poignant angle for photographing Khan Market, home to what he called the “comedy of the upper class.” Recently, he saw a Maharani parading up the central lane of the market. “She had this huge wig, wore an expensive saree and had her flunkies around her carrying many shopping bags,” he said.

India’s hundreds of princely states mean real Maharjas and Maharanis are a looming presence in the country. As thrilling as a rare bird sighting, these royals can be spotted in their natural habitats: five star hotels, upscale shops and Khan Market, mingling with fellow members of the privileged English-speaking classes.

Khan Market situated between Lutyen’s Delhi and New Delhi. Lutyen’s Delhi is populated by wealthy diplomatic and government families, many of whom succeeded the British after independence, speak privileged English and are often members of the Congress Party – the center left intellectual party that ruled India from the time the British left until 2016 when Modi’s Hindu populist movement took over. Lutyen’s Delhi abuts New Delhi, home to India’s new money and many middle class families who aspire to have their children employed in future white collar office jobs with international firms. Khan Market is located at the fortunate nexus of these two critical economic zones– a development no one would have imagined when the land was given to refugees from Pakistan in 1950.

It’s Khan Market’s reputation for English-speaking elitism that has caught the ire of some of Mr. Modi’s supporters. Mr. Modi is the son of a tea seller. He addresses his populist followers in Hindi, the language of India’s masses. Mr. Modi has leveraged this spite towards the upper class through his cutting remarks condemning his political opposition as “the Khan Market gang.”

Faqir Chand Bookstore is about a third the size of a grocery store aisle in an American big box retailer. In that space thousands of books are piled higgledy-piggledy from the floor to the ceiling, four rows deep, leaving a two-foot path in the center for customers to shimmy around one another. “We have no idea what’s back there,” Abhinov Chand says, indicating the books hidden in four rows behind. Abhinov is an earnest, smiling fellow in his 20s, and will be the third-generation proprietor of Faqir Chands Bookstore when he takes over the shop from his father.

Abhinov Chand’s grandfather was allocated the Khan Market shop in 1951. Abhinov’s father Anup prefers the term “resettler” to refugee. “I feel a refugee is someone who comes from different country. If it is one country divided in two than you are a resettler,” he said. 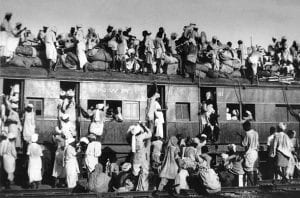 Khan Market was created to house the worn refugees who survived the journey to India from Pakistan after Partition in 1947. “By 1948, as the great migration drew to a close, more than fifteen million people had been uprooted, and between one and two million were dead. The comparison with the death camps is not so far-fetched as it may seem,” wrote William Dalrymple in the New Yorker. Photo Credit: Creative Commons

In 1947, the British raced out of South Asia, partitioning the entire Indian sub-continent in two: a Hindu-Majority state for India and a Muslim-majority nation for Pakistan. Hindus residing in Pakistan–including Abhinov’s grandfather father–were forced to migrate to India. Muslims vacated India overnight, fleeing to Pakistan.

During this great migration violence broke out between Hindus and Muslims, resulting in “a mutual genocide as unexpected as it was unprecedented,” historian and author William Dalrymple wrote in the New Yorker. Up to two million people were killed. “Partition is central to modern identity in the Indian subcontinent, as the Holocaust is to identity among Jews,” wrote Dalrymple.
Khan Market was born as a result of this carnage between Muslims and Hindus. In 1950, Delhi’s Ministry of Rehabilitation built Khan Market to house weary refugees who had stumbled through the slaughter from the Northwest Frontier Province (now Pakistan), said Anup Chand.

The Chands are among only four remaining original families in Khan Market. Abhinov’s grandfather was allocated the shop in 1950. “At that time you could get a shop in Khan Market for 5000 Rupees (70 USD),” said Anup Chand. “Today it will cost you the same amount to buy one coffee table book,” he chuckled.

For the first two decades of the market’s existence, proprietors could barely make enough to keep the shops running. “It was really hand to mouth,” said Anup Chand, staring down into his hands. “Really – hand to mouth.”

Today, the Chands could easily make multiple times the amount they earn from the bookshop if they rented it to an international retailer.

Despite the skyrocketing rental the store could earn, Anup Chand makes it clear it will remain a bookstore under their care. The Chands are one of only four remaining original families who have not rented to an external business.

“An empty mind is the devil’s workshop. And with a lot of money it makes it much worse,” he said.

Khan Market falls under the New Delhi Municipal Corporation(NDMC), said Supreme Court Advocate Siddharth Vaid in an interview for the Click. “The power or right to name or rename a market has not been dealt with specifically. However, on a reasonable interpretation of “premises”and overall right to regulate municipal markets it could be interpreted that NDMC would have the right to regulate the change of name,” said Vaid. Recently, the NDMC renamed Aurangzeb Road. Aurangzeb was a Muslim Mughal Emperor.

The court case petitioning the NDMC has overturned in large part due to the collective pressure by the Khan Market Trading Association.

However this does not mean the threat has subsided. “The Delhi elections are coming up. A politician might put this name change forward to for the vote bank,” said journalist Shome Chaudhury. “To create turmoil and create news.”

Shome credits the rise of right wing nationalism with meriting taking the threat level of the name change from it’s Muslim origin to a Hindu name. “What happens is they push. They push a bit more. And that’s how the work gets done,” he said. “There is a scratch there now. The fear is lurking.”