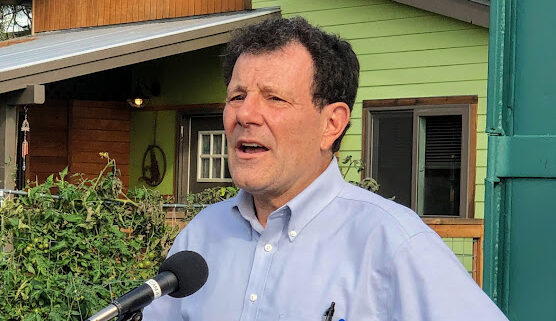 Then-gubernatorial candidate Nicholas Kristof stumping in Eugene on Oct. 28, 2021. Months later, the Oregon Sec. of State and Oregon Supreme Court would disqualify his candidacy due to residency issues.

Kristof Can’t Run for Oregon Governor, but Still Has $1 million in Hand. What Now?

(EUGENE, Ore.)—Former Oregon gubernatorial candidate and journalist Nicholas Kristof says he isn’t returning donations to his defunct campaign, but plans to use the more than $1 million in his campaign coffers in a “catalytic way.”

But the journalist-turned-candidate was running for an office he appeared to be ineligible to seek. Oregon’s rules for state offices require candidates to live in the Beaver State for three years. Kristof voted in New York in 2020.

The Kristof campaign readily played down the residency hiccup claiming that his passion and commitment to Oregon’s communities—as well as a 15-page argument shared with the Willamette Weekly detailing his childhood years in Yamhill and property—would justify his candidacy.

And so the stumping continued, as well as the fundraising—for months, before a court halted the campaign.

Kristof’s press releases and social media hyped up his war chest’s significant balance, suggesting early on that small, independent donations under $100 numbered in the thousands and hailed from every county save for Sherman (which leans heavily conservative in this blue state).  But while the grassroots support is evident in the Oregon Secretary of State’s database of donors for “Nick for Oregon,”  large contributions—including many from out of state—financed Kristof’s bid.

Bill and Melinda Gates each separately shelled out $50,000 to the campaign.  LinkedIn co-founder and Menlo Park entrepreneur Reid Hoffman, gave two donations of $50,000 in November and January and the Angelina Jolie Foundation donated $10,000.

Closer to Kristof’s adopted state was the Oregon Labor Policy Network, which gave $75,000.

Within weeks of launching his campaign, it became clear that the Oregon Secretary of State was aware of Kristof’s ineligibility, but on Nov. 8, Carla Axtman, a spokesperson for the office said it could not make a determination until Kristof officially filed his paperwork.

At its peak, the Kristof campaign coffers were reported to be at $1.8 million.  By late January, other powerhouse donors were added to the mix, including documentary producer and philanthropist Abigail Disney, and Women in Sustainable Enterprise LLC, who each gave $10,000.

But on Jan. 6, Oregon’s Secretary of State, Shemia Fagan, declared that Kristof did not meet the three-year-residency requirement given his New York voting record, maintenance of his New York driver’s license, and New York income tax documents.  Kristof challenged her decision, bringing the case to the Oregon Supreme Court.  On Feb. 17, the justices upheld Fagan’s decision, effectively ending his campaign.

Even after the ruling, some contributions continued to trickle in.   And while there are a dozen line items in the campaign contribution database for “Return or Refund of Contribution” few contributions have been returned.

Kristof said in an email to The Click that he’s “working on a specific plan to use my surplus campaign money on a project in Oregon that would address the issues I focused on in my campaign.”

“I want to use it in (a) catalytic way, unlocking at least 10 times as much money as I put in, and is effective, so this requires partnerships. So I’ve been talking with some of the key potential partners about whether what I want to do is feasible,” Kristof said. “Sorry I can’t be more clear, but it’s best to pursue quietly until we have everybody on the same page.”

“There are several things he could do with the money, including refunding donors, giving it to charity, giving it to another candidate’s PAC, or holding it for a future run for office,” wrote Morris. “If he were to run for office again, he would need to file an updated statement of purpose for his PAC.”

The last significant expenditure Nick Kristof’s campaign had was nearly $275,000 to the Perkins Coie law firm, recorded Feb. 25 (Perkins Coie had presented the candidate’s arguments that he met the residency requirement.)  Even minus that amount, Kristof’s contributions for his ill-fated gubernatorial bid still come to over $1 million. What comes of that money is still anyone’s guess.